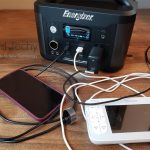 Wherever we go, our electronic devices are important tools for our everyday lives. Even a few years back, the idea of going camping without electricity wasn’t too big of a deal. But with our phones becoming useful for more and more tasks, it’s important to have a backup supply of power. For one thing, you always want to have enough juice to call for help in an emergency. For another thing, you probably want to use your phone for other tasks. If you’re going for a day hike, you’ll want to take pictures. You might even use an app to find the best fishing spots, or to keep an eye on the weather.

Today, we’ll be reviewing the Energizer PPS700 (626Wh/600W) Portable Power Station. As a brand, Energizer needs no introduction. They’ve long been one of the world’s leading battery brands. But it’s only recently that they’ve started producing their own power stations. The PPS700 is a mid-sized device, and provides a correspondingly medium amount of power. It also has a very reliable battery, with a rating of 1,000 duty cycles. But how good is the charging performance? What devices is it compatible with, and how can you charge the internal battery? Before we can render a final verdict, we’ll have to answer these and other questions. Let’s start with the physical construction, and move on from there! 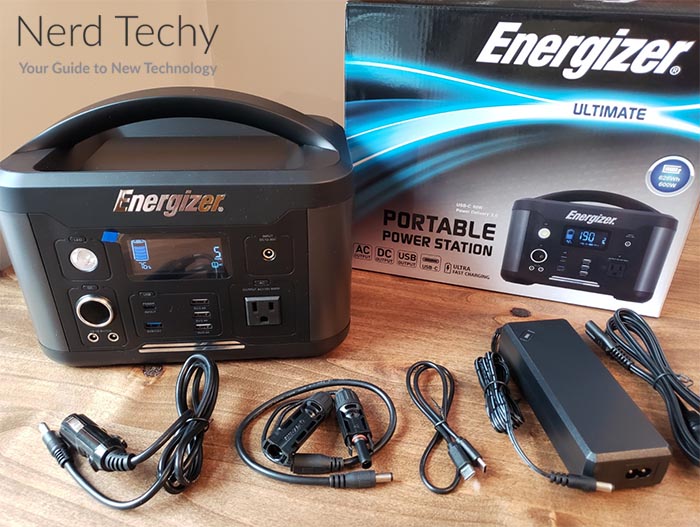 The Energizer PPS700 has a roughly rectangular shape, with rounded corners and a beveled top, with housing constructed from a black plastic, with a slightly darker top panel. The overall size is 10.2 inches wide, 6.8 inches deep, and 7.9 inches tall. At 12 pounds, it’s surprisingly light, even considering the size. It’s also easy to carry, with a curved handle that arches over the top of the unit. The sides are vented across the top halves, which allows air to flow through the housing. This keeps the internal electronics nice and cool, with the aid of a fan that kicks in as needed. The fan is fairly quiet, and only produces a quiet hum. 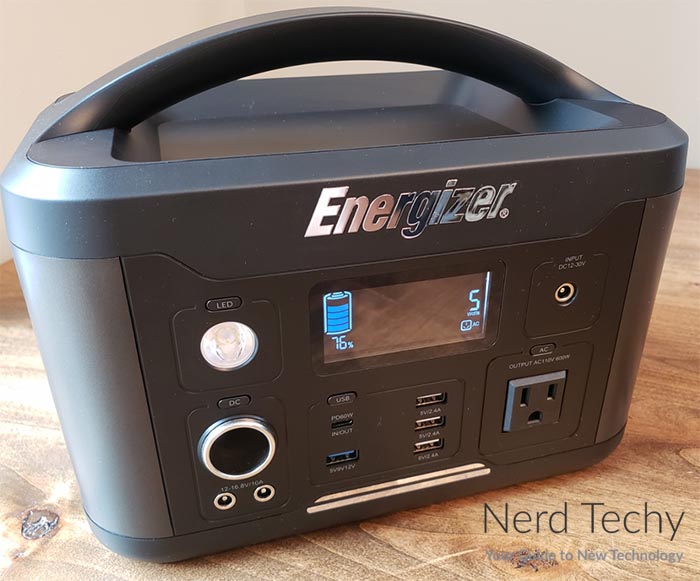 As you can see, this is a very portable power bank. But what if you want one that’s even easier to carry around? If that’s what you need, take a look at the Energizer PPS320. It’s even lighter and more compact, but it only has half the total capacity. 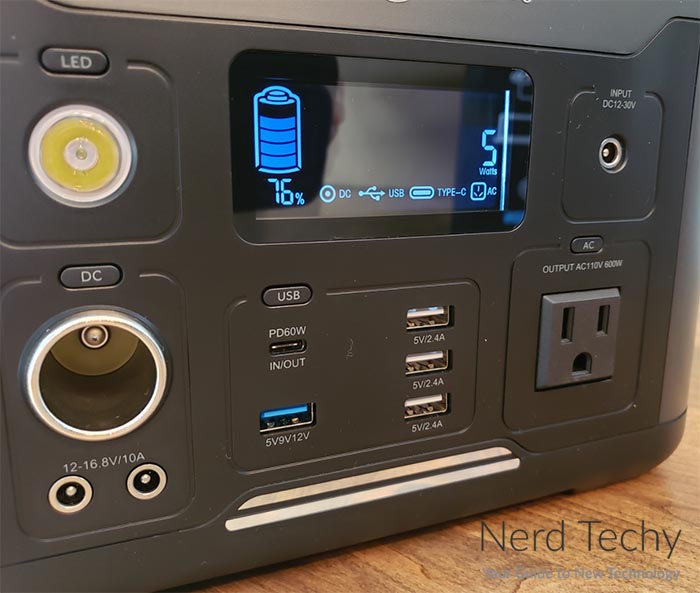 On the front of the housing, right in the center, you’ll see an attractive blue and white LCD display. Here, you’ll see a lot of useful information about the power station’s status. On the left, there’s a visual battery meter, with a five-bar battery. Just underneath, there’s a numeric display of the percentage of battery remaining. In the middle of the display, in large numbers, you’ll see how much power is being drawn from it. In smaller numbers to the right, you’ll see how many watts are being supplied. There’s also a row of indicators across the bottom of the screen. These show you which ports are currently active. 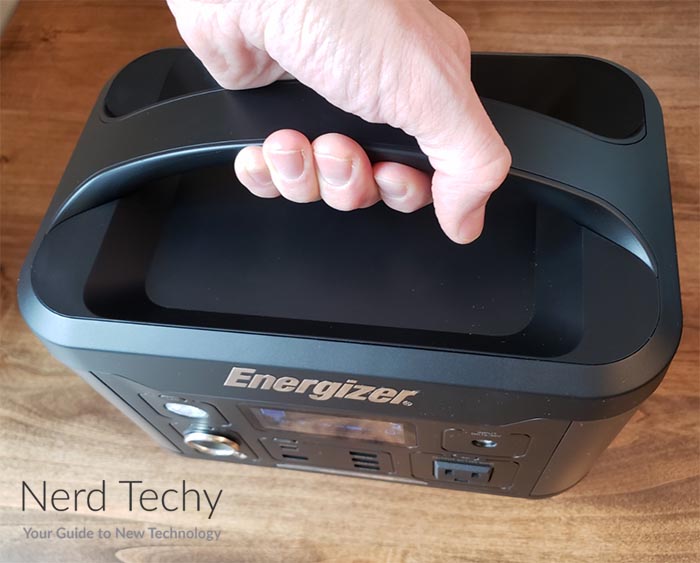 All of the power inputs and outputs are also located on the front of the housing. At the top right, there’s a barrel-style input port which is used for charging the battery. At the bottom right, there’s a grounded, three-prong AC power outlet. Near the bottom center, there’s a cluster of USB ports. The three on the right are standard USB Type-A. The Type-A port on the left with the blue tab provides QC charging power. And the USB Type-C PD port can be used as either an input or an output. At the bottom left, there’s an automotive style DC outlet, along with a pair of barrel-style ports. Each set of ports has its own control button, as does the AC outlet. By shutting off outlets you’re not using, you keep the battery from slowly draining. 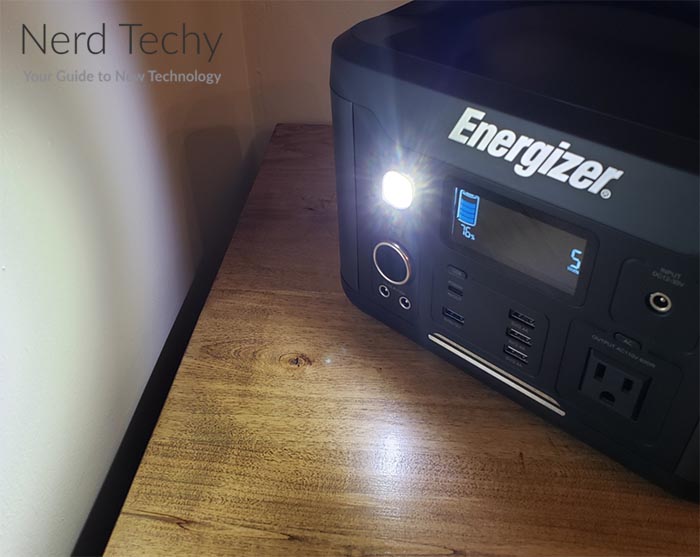 At the top left of the front of the housing, you’ll find a round LED flashlight, with its own power button. The light is nice and bright, and can illuminate a large area. On the downside, it’s located on the front. This might seem like a good thing, but it’s actually a poor choice of placement. If you need to plug anything in or read the LCD display, you’ve got a spotlight shining in your face. Energizer would have done better to locate the light on the side or the back of the housing.

Along with the power station itself, the kit includes all the adapters you need for charging. There’s a USB Type-C PD cable that can supply up to 60 watts. There’s an AC adapter for plugging into the DC charging port, and a similar automotive charging cable. Additionally, there’s also a solar charging cable, which converts a standard MC4 solar connection to barrel-style DC. 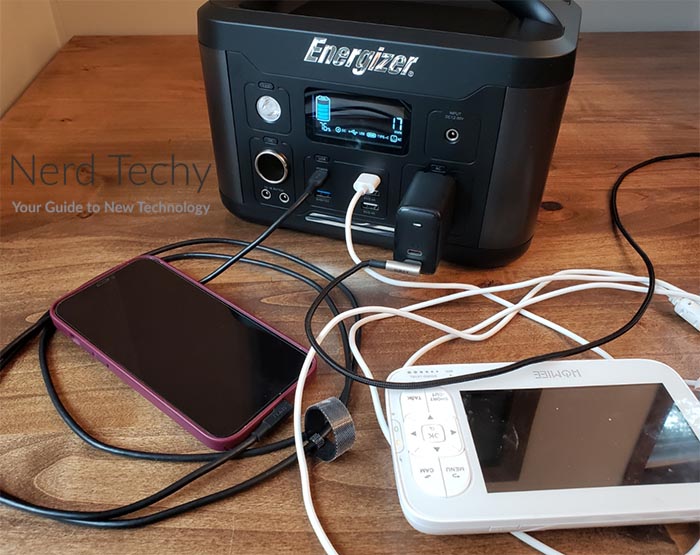 As you can see, the PPS700 is well-engineered on the outside. But how well does it perform when you plug into it? Obviously, it’s going to depend on which port you’re plugging into. To begin with, the AC power outlet supplies 600 watts of power. That’s about 40 percent of what you’d get from a typical household outlet. You’ll be able to run most devices that require AC power, except for high-wattage equipment. So you won’t be able to run a powerful griddle or a large fridge. But you can run a small mini fridge, or even a small, 600-watt microwave. 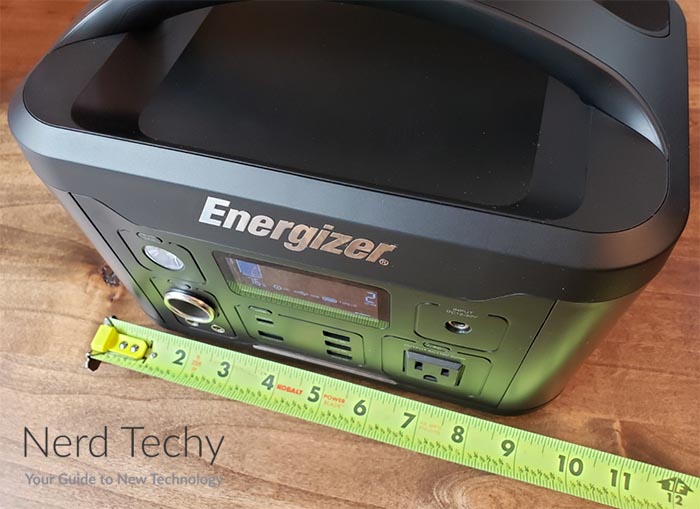 The three DC power outlets put out 12 to 16.8 volts at 10 amps. This works out to 120 to 168 total watts of power output. The USB ports are all different. The three standard Type-A ports, the ones with the black tabs, output a standard 12 watts. The Type-A QC port, the one with the blue tab, is capable of outputting up to 18 watts. This is the one you’ll want to use if you’re charging an iPhone. The Type-C PD port is the most powerful of all, and puts out up to 60 watts. That’s enough for any tablet, and even for most laptops. But if you have a very large laptop, you’ll have to power down in order to charge it. 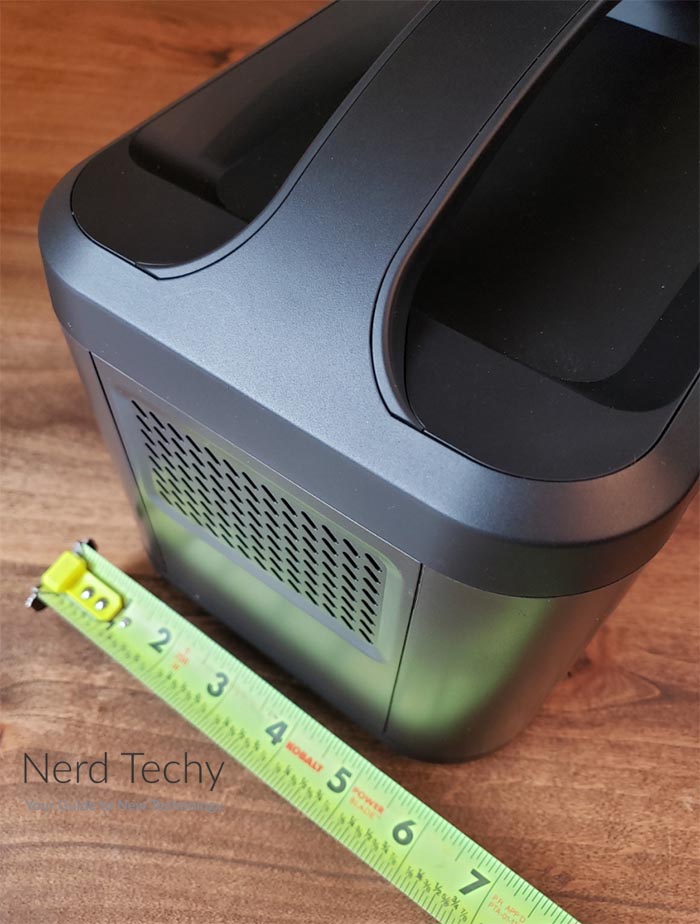 The battery capacity of the PPS700 is 626 watt-hours (Wh). Here’s what that means for your charging performance. You can recharge an iPhone or similar smartphone around 45 times. For a Nintendo Switch, you’ll get around 35 charges. Even a large MacBook Pro 16” can be recharged six full times. Keep in mind that the 600-watt total output is shared between all the different ports. So if you’re drawing 60 watts on the Type-C PD port, the AC outlet will only provide 540.

The internal battery is a Lithium-ion variety. This is the latest battery technology, and it’s designed to be both safe and long-lasting. The duty rating is for 1,000 full cycles, which is reasonably good. This means that after 1,000 charge cycles, the battery will retain 80 percent of its original capacity. 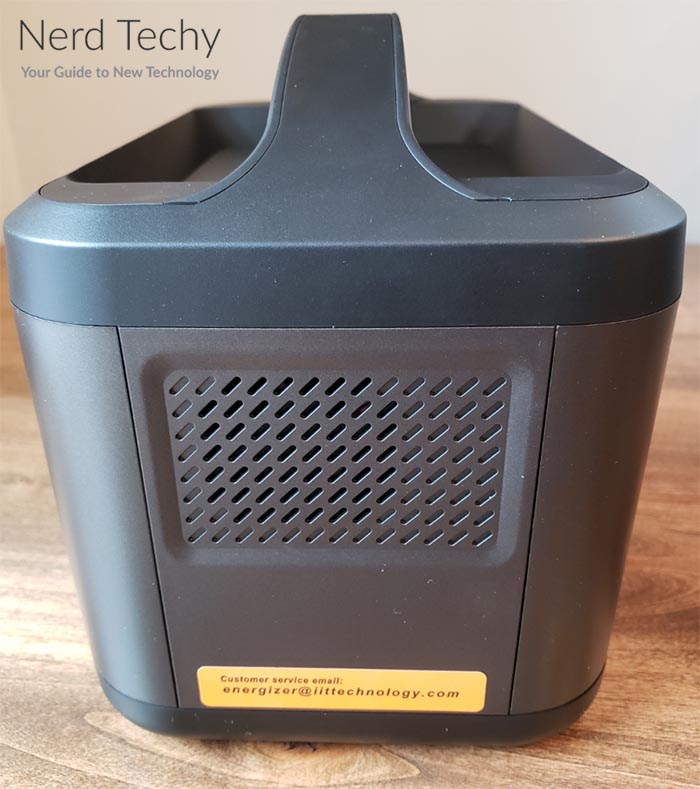 The PPS700 is a reasonably powerful power station, especially for the size. But what if you need a ton of power and battery capacity? In that case, consider, the Bluetti NA300 and B480. They’re not portable, but they’re a modular system that can be built out to 12,600Wh of capacity. 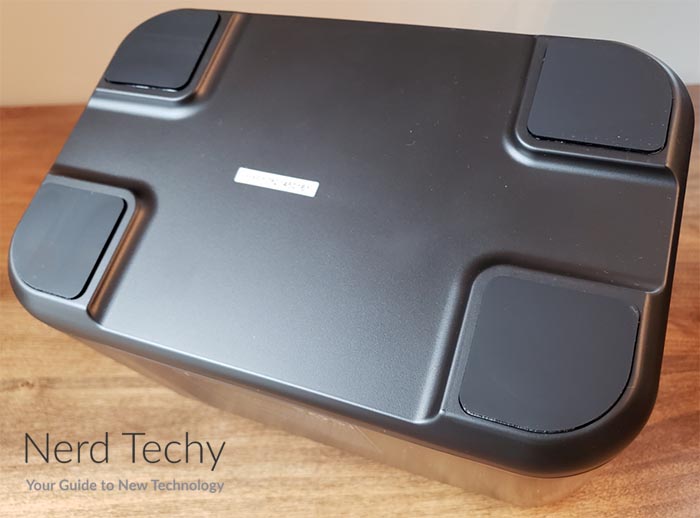 We’ve talked a fair bit already about the battery inside the Energizer PPS700. But how do you keep it charged? To begin with, you could use the AC power adapter to plug into your wall. This is the fastest method, and will fully charge a dead battery in around 7 ½ hours. You’ll get almost as much speed if you plug into an automotive outlet, with around 8 hours’ charge time. Using a 60-watt USB Type-C power supply, you can charge in around 9 ½ hours. And with a solar panel, you can expect to charge in about 13 hours. Energizer specifically recommends the TOWERWIN 100w Solar Panel, which we’ll discuss more in a moment. 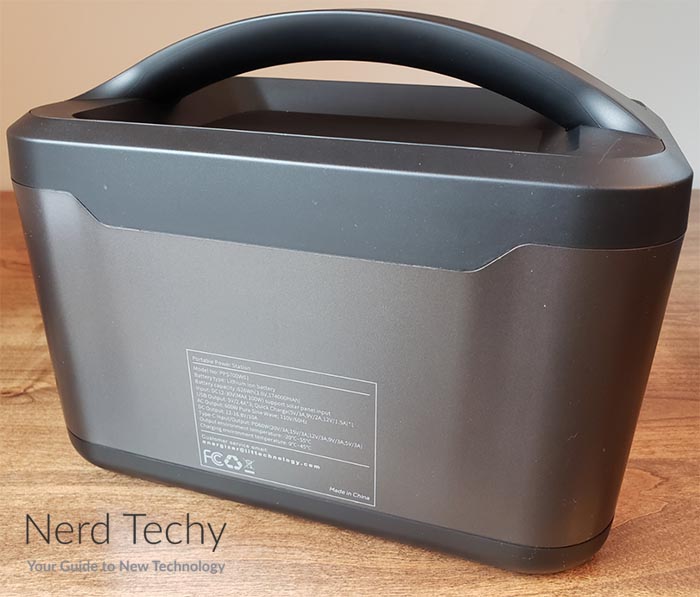 Like most modern power stations, this one has a battery management system (BMS) for safety purposes. This circuitry provides a number of features to protect both the power station and your connected devices. To keep your devices safe, it has overcharge, over current, and short circuit protection. To protect the main battery, it has over voltage and over discharge protection. There’s also thermal protection, which shuts off the whole machine if it starts to get dangerously hot. 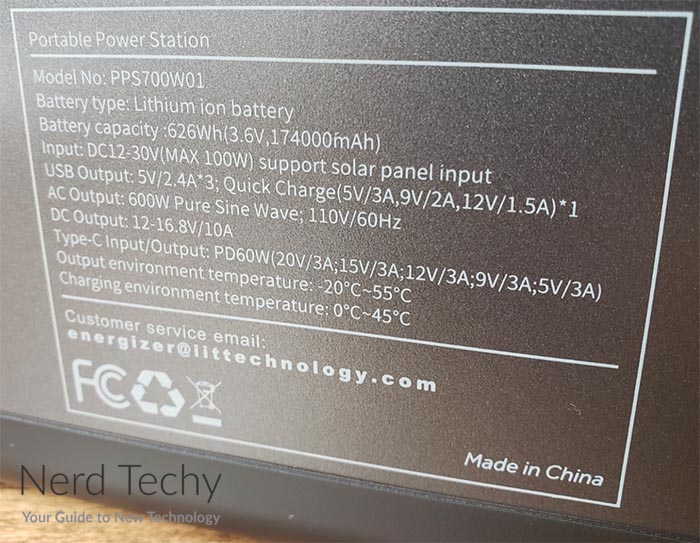 Another thing we should note is that the PPS700 provides pure sine wave power via the AC outlet. A lot of power stations provide what’s called “modified sine wave” power, which can damage sensitive electronics. With pure sine wave power, you can power almost any device. That makes this power station a great choice for CPAP users. Its battery will power even a 70-watt machine for more than 8 hours. 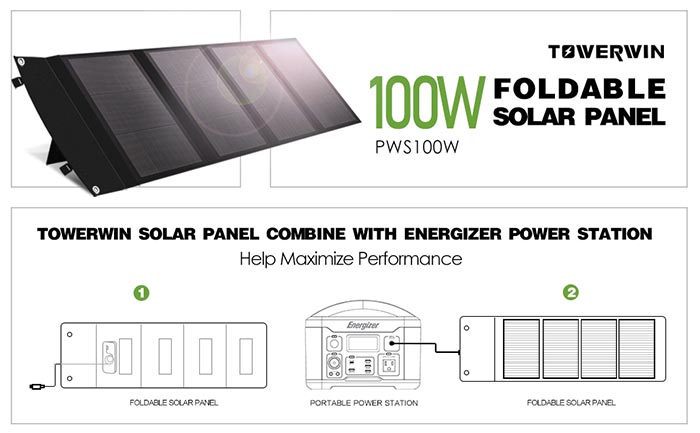 As we mentioned, Energizer recommends the TOWERWIN 100W Solar Panel for charging the PPS700. This is a very well-constructed solar panel, with a tough nylon backing that can take a lot of abuse. Like many modern solar panels, it’s collapsible, so you can easily take it on the road. When it’s folded up, it measures only 13.97 x 20.86 x 2.36 inches. It opens up to 62.99 x 20.86 x 0.39 inches, so you get plenty of surface area for four individual panels. The overall weight is just 11.68 pounds, so it’s easy enough to take with you on the road. 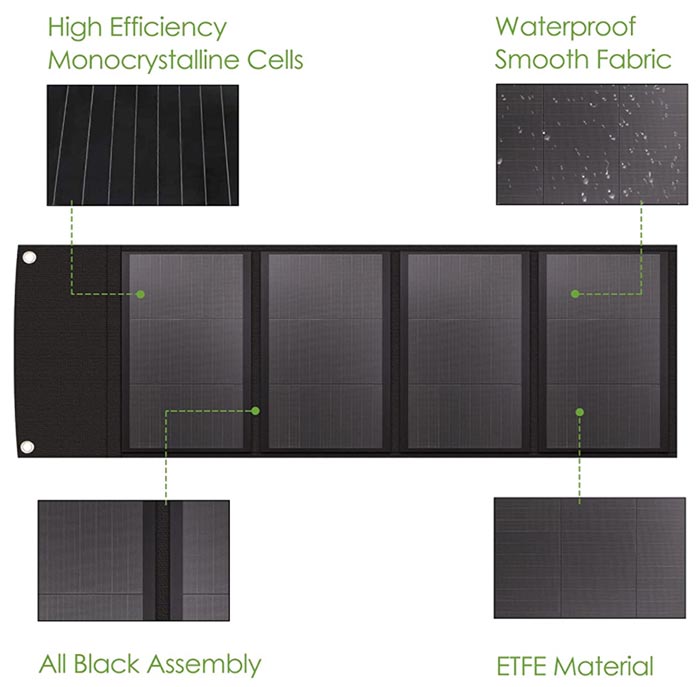 The actual solar cells are of very good quality, and will easily last as long as your power station. They’re constructed from monocrystalline silicon, which is exceptionally efficient technology. In fact, they have an efficiency rating of 24 percent, among the highest ratings on today’s market. The cells are coated with ETFE, which is a transparent, waterproof technology that provides a lot of protection. The panels are very durable, and are rated to last for 10 years.

Deployment is simple and straightforward. There’s a kickstand on the back, which can be used to prop the panel up to point at the sun. There’s also a pair of grommets on one end, so you can hang it on a tree branch or over a tent. The power outputs are located in a zipper pocket on the back of the panel, which keeps them safe from damage. There’s a little black fob inside, with a pair of USB Type-A ports and a single 18-watt USB Type-C output. You can also connect a barrel-style DC adapter. There’s a cord included, along with a set off 10 adapter tips. 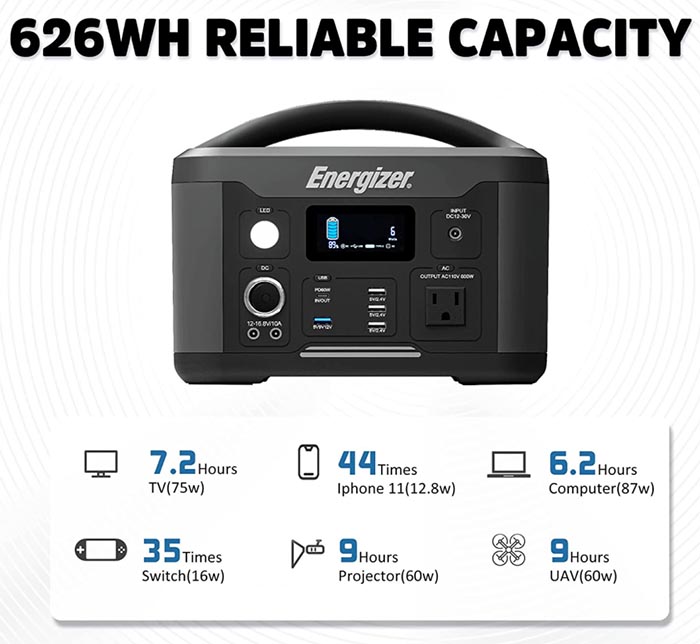 The Energizer PPS700 Portable Power Station is a very well-designed machine. With the exception of the light placement, we were big fans of the physical design and layout. The battery is also reasonably powerful, with a 626Wh capacity and 600-watt maximum output. It’s safe to use, and compatible with almost any device. And with multiple charging options, you’ll never have to worry about running out of power. Throw in the TOWERWIN 100w Solar Panel, and you’ve got the complete package.