It might seem like film photography has been dead for years, but there are a surprising number of film fanatics in the world. Up until quite recently, film was thought to produce more detailed images than digital cameras. The very first digital camera to produce better images than film was the Canon 1D Mark II, which sold for over $10,000 when it was released in 2001. Even then, it wasn’t until 2009 that comparable cameras were available at consumer price levels, so there was a large volume of photographers still using film.

On top of all the modern film photos, there are still plenty of vintage photos in the wild. For those of you who are old enough to remember, storing and organizing your printed photos used to be a big deal. You’d fill a massive box with decorative albums, taking care to properly annotate the back of each photo. At family events you’d pull out the albums and flip through them with your loved ones. For many people, these photos were a big deal. 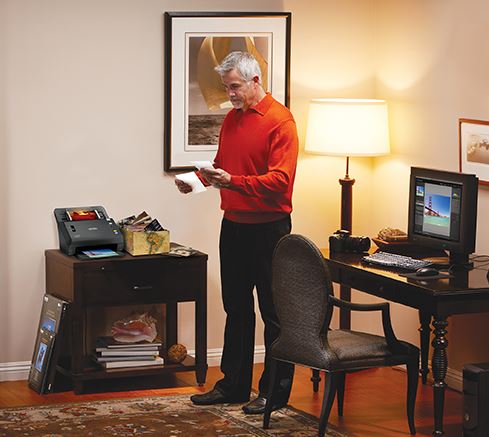 Maybe you’ve been snapping film shots well into the 21st century, or perhaps you’ve just come across a massive stack of old family photos. Regardless, you’ve now got a major problem on your hands. Film tends to degrade. The older it is, the worse it looks. Film photos take a lot of work to shoot and produce, so simply letting them rot away would be a terrible waste. If any of this is relatable to you, Epson has a solution for you. The FastFoto FF-640 is a high speed photo scanner designed to help digitize your printed images. It’s certainly not the first photo scanner on the market, but it may very well be the simplest. Let’s take a look and see how it stacks up. 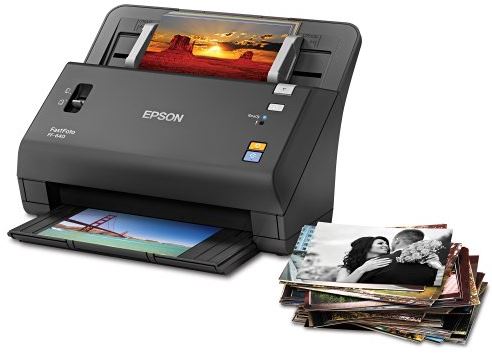 At first glance, the Epson FastFoto FF-640 High Speed Photo Scanning System looks a lot like an awkwardly shaped printer. You’ve got a tray along the top with adjustable sizing, a few basic buttons, (power, start, cancel) and a switch that allows you to flip on double sided scanning. The scanner is in every way utilitarian. It’s lightweight, intuitively laid out, and does not contain any notable design elements that do not directly impact the functionality. Let’s see how it performs. 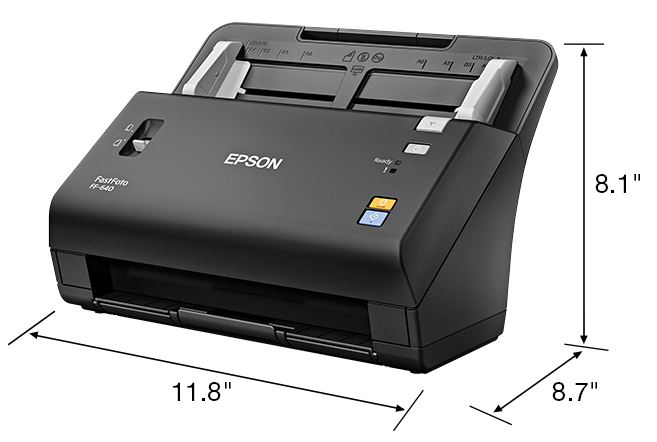 One of the biggest reasons you’d chose this scanner over another is its tray capacity. Just ask anyone who’s scanned a large volume of family photos, it can be a pain! Most scanners only handle one photo at a time, so you’re force to feed these delicate heirlooms into the machine, one by one, while you wait hours for the scan to complete. But with the FF-640, you’re able to load up to 30 photos at a time. 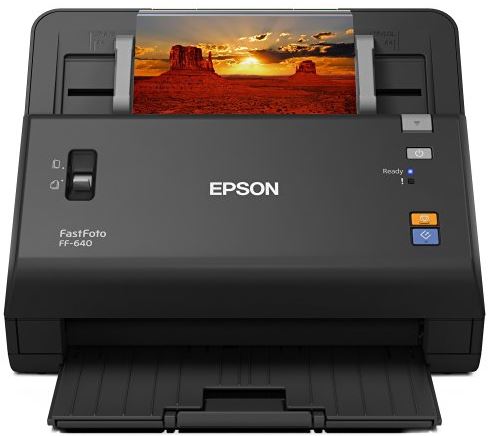 The feeding mechanism quite a bit different than what we’re used to seeing. Instead of a few tiny wheels in the center of the feed area, the scanner has one long drum that pulls the photos evenly through the scanner. There are two significant benefits to this system. First, photos that are slightly bent, warped, or folded can still be fed. Next, your photos don’t need to be the same size. Yep, that means that you can take a handful of hand-cut photos from your grandmother’s brownie camera, place them in the tray, then kick back while the printer figures everything out for you. For this reason alone, the scanner is perfect for high volume users.

If you thought the volume of photos the FF-640 can handle was impressive, wait until you see how quickly it can scan them all. If you’re in a huge rush, you can scan photos at a rate of less than a second. When we first witnessed this, we thought something had gone wrong. It didn’t even appear to be scanning the photos, it just seemed to be taking them out of the tray and spitting them out the front. But one quick glance at the computer screen and we realized that the photos were already downloaded to our computer. Pretty impressive! 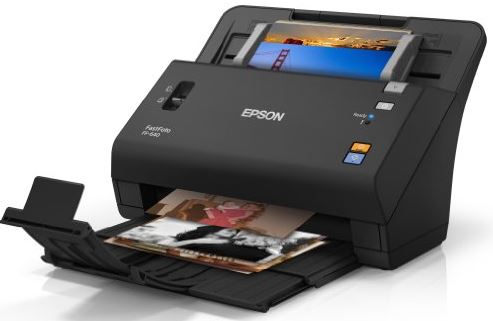 It’s worth noting that the scanner comes set up for high speed by default, but this cuts the effective resolution in half. Our recommendation? Set the quality to “high” or the speed to “low”. This will double your effective resolution to 600, giving you twice as much detail. This does mean that the scans will take twice as long, but we’re still only talking about an extra second.

Epson includes a scanning application that is designed to make digitizing large volumes of photos simple. The handiest feature is certainly the quick group function. As photos are scanned, they’ll appear nearly instantly in the program. You’re provided a tiled view with about 20 photos on screen. This is just large enough that you can see the details, but small enough that you can scroll through a large volume of photos at once. Quick grouping is exactly what it sounds like, you simply click on multiple photos you want to put together, press a single button, and they’ll all be placed in the same folder. Imagine that you had a pile of 1000 photos of different sizes, all of which had been shuffled. With the FF-640, you could probably scan and sort them within an hour. 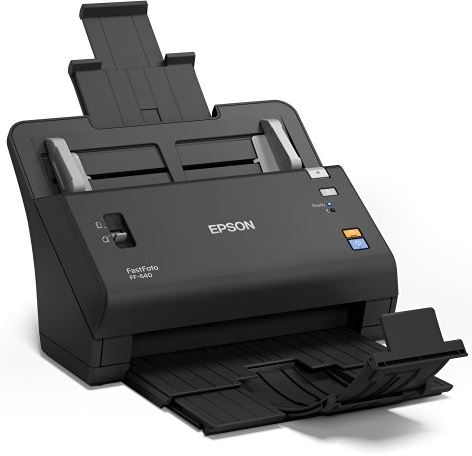 Epson’s software also has an advanced color correction system designed to reverse the effects of aging photos. There are two modes, automatic and manual. Automatic mode is passable. There were a few photos that improved by quite a margin after it’s adjustments, but a large number of them came out looking different. For example, a picture which had developed a reddish hue with age would have a blueish hue after editing. So it didn’t really make the photos worse, but it certainly didn’t improve them. But if you’re willing to play around, manual editing mode is where things start to look good. You can individually adjust the saturation, tweak the white balance, and adjust the hue. There are also several other features that can address specific issues like red-eye, dirt, or scratches.

Perhaps you’re not interested in going through piles of photos and color correcting them one by one. This is where using color correction in conjunction with quick group can be so powerful. Generally, photos that were taken at the same time tend to degrade at the same time. You can quickly group similar photos together, edit one of them, then apply the same settings to the rest of the group. 90% of the photos will come out looking perfect, and the others will only need a few quick adjustments. 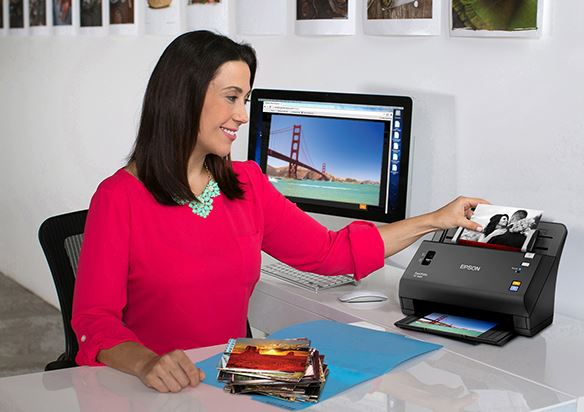 When in high quality mode, the scanner captures detail with a resolution of 600 dots per inch. With a standard 4×6 print, this results in roughly a 9 Megapixel image. For archiving your classic family photos, this is more than enough detail. If you’re planning to upload the images to social media sites, then you won’t be able to find a single complaint about the quality. In fact, you could even make a reasonable print. If you scanned a high quality photo and printed the image, you’d probably notice a slight degradation of quality. This means that the scanner is perfect for the uses we’ve outlined above, but consumers who stuck to film photography for quality reasons may be a little underwhelmed with the performance.

The Epson FastFoto FF-640 is probably one of the easiest photo scanners to use, but has a very limited market. The deciding factor will ultimately be how many photos you have to scan. If you were willing to mail your photos off to get scanned at a professional company, you’d be paying about 99c per photo without editing, and $1.75 with editing. Use that to calculate your break-even point. 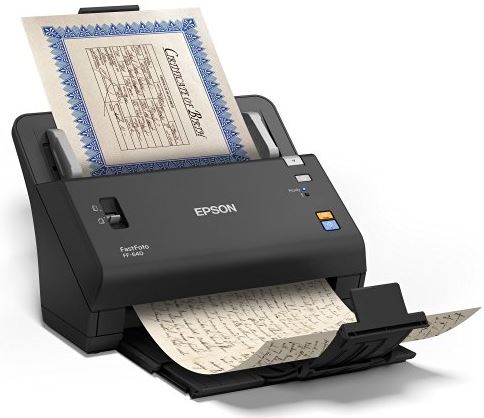 In our opinion, if you have over 1000 photos to be scanned and each of them needs a little touching up, then the FF-640 will make your life much easier. And that’s assuming that you will be doing the photos all at once. If you’re going to be scanning images regularly, then the scanner is a no-brainer. You’ll save yourself plenty of time, and maybe even a bit of money in the long run too.

If you shoot film for quality, this scanner could be a bit polarizing. Common reasoning for shooting film is the amount of detail that can be captured. Theoretically, you’d need to scan your photos at 3000 DPI in order to perfectly recreate a film image. Comparatively, the 600 DPI that this scanner is capable of seems a little small. Before you make your decision, you may want to head down to your local Apple Store. Take a peek at once of their brand new retina displays. If you think they’re absolute garbage, then perhaps you would be disappointed with the images this scanner produces. But the retina displays have a pixel density of 300 pixels per inch. Therefore, this scanner is capable of producing images that are twice as detailed as the retina display.