Bose is a company that’s generally known for making compact, all in one audio systems. But when you get into the high-end home theater market, their business model doesn’t really work. If you want loud, encompassing sound, it would make sense that you’d need a set of large, dominant speakers to do the job.

Until recently, that has been the industry standard. But with the release of the Lifestyle 600 and 650 Home Entertainment Systems, Bose has changed the way we look at home theater systems. They’re not the first to release a compact 5.1 surround sound system. Just head down to your local store and you’ll have many different models to choose from. But in those circumstances, their compact size is not a result of engineering and design. It’s simply an example of manufactures using inexpensive components to make unbelievably cheap systems that never quite live up to your expectations.

Can Bose’s compact 5.1 systems compete with a properly tuned home theater, or is this simply an overpriced gimmick? Let’s take a look.

The Lifestyle 600 and Lifestyle 650 have a lot of similarities. They’re composed of three main components: the console, the wireless bass module, and the remote speakers. The receiver is the hub of the entire system. It takes all of your inputs, whether they’re 4k video sources or your computer, and acts as a middle man between them and the television. You can change inputs, channels, and control every aspect of the sound from the included remote. The wireless bass module is the same impressive Bose Acoustimass 300 Bass Module, but that’s where the similarities end. 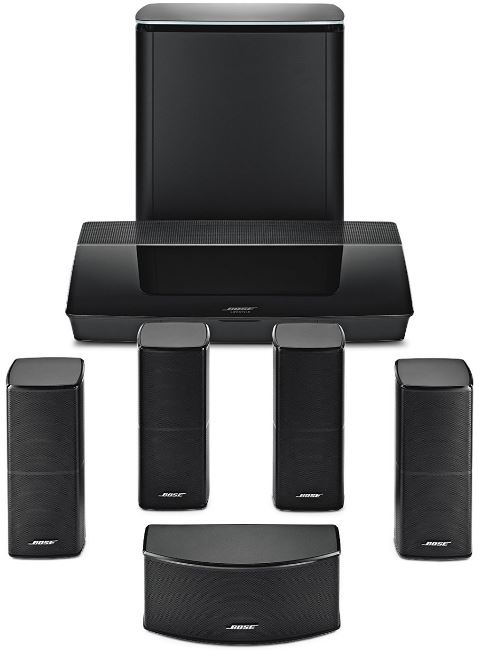 With the 600 you receive five separate speakers. You’ve got three for the front: left, right, and a center channel. In the rear you have your two satellite speakers. In the 600 series, the main speakers are the same models used in their previous top tier kit, the Lifestyle 535. But when you go with the 650 series, you get access to their brand new OmniJewel speakers. You get four identical modules for the front and rear satellites, plus a new extended center channel. 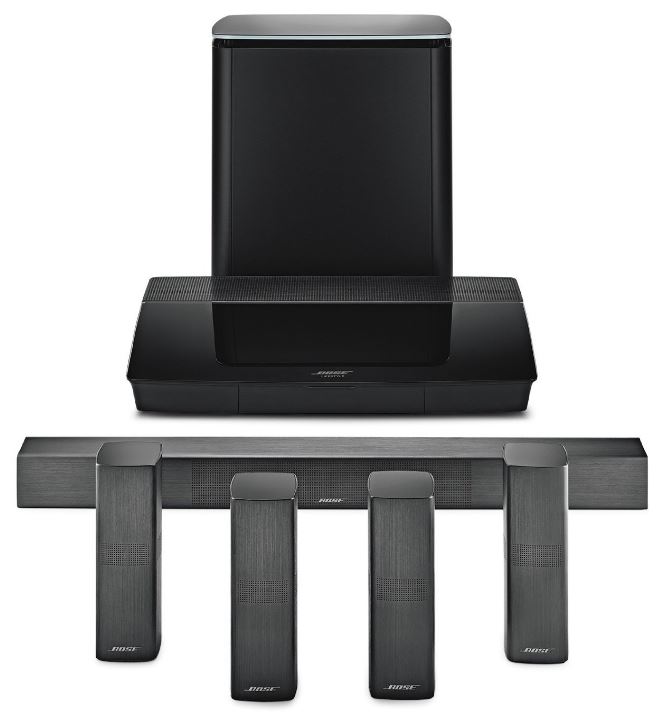 If you’ve used any previous Bose products, you know that they are the experts of shoving big sound into a small package. The reason their systems are competitive with some of the larger premium audio gear is because of the advanced engineering that goes into these systems.

With the Jewel Cube speakers, used in the Lifestyle 600, they’ve already proven themselves in the marketplace. They actually contain two independent drivers inside of them. Unlike most audio systems which use a tweeter for the high notes and woofers for the low ones, these drivers are actually identical. While they both play the same frequencies, it’s the direction of the sound that’s different. If you were to open them up, you’d see that each of the drivers are tilted either to the left or to the right at roughly a 30-degree angle. With their advanced sound processing system, they can adjust the volumes of each direction to create the illusion that the sound is coming from somewhere in the middle of the room, rather than one of the individual speakers.

The OmniJewel speakers take this design a step further. Instead of the two focal points used in the Jewel Cube speakers, these speakers technically have unlimited focal points. How is this possible? Typical speakers work by pushing air. When the driver vibrates, it pushes these vibrations towards the listener. In order to be effective, you need to have the speaker pointed at you. 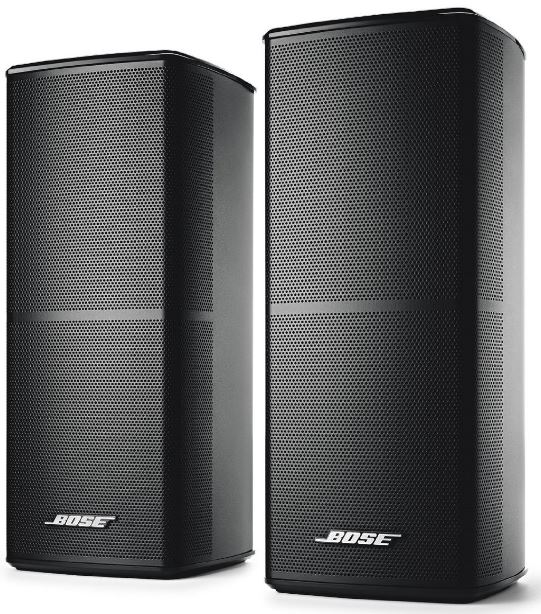 With the OmniJewel speakers, nothing is pointed at you. You’ll notice that there is a small grill around the center of each satellite. Behind the grill is a pocket of air that is sandwiched between the two drivers. When they move in unison, they both push air into the same empty space. This causes the air to compress and move away from the drivers in an even, 360-degree manner. If the movements between the two speakers are slightly different, this will cause the sound waves to be pushed in a specific direction. This allows the speaker to direct sound exactly where it’s supposed to go. This makes the Lifestyle 650 the first true 360 degree surround sound system.

Now that you know how the speakers are supposed to work, the question is “how do they sound?” In one word: Surreal. Imagine the first time you upgraded from a stereo system to a surround system. At first, it seems incredible. Your ears aren’t used to hearing audio coming from so many different directions. But eventually, your ears get used to the effect and the magic fades. 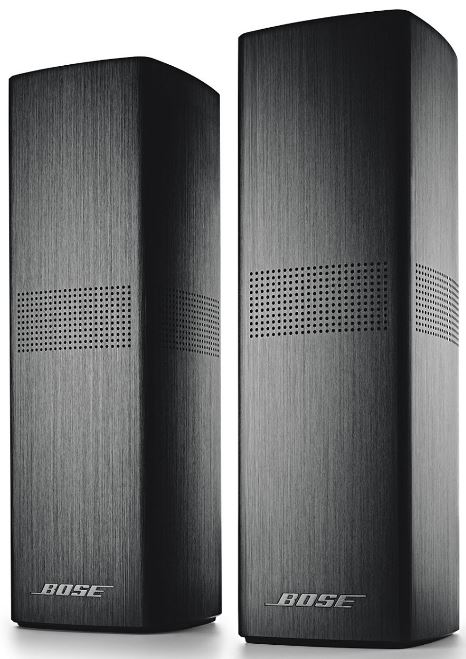 Separation in the 600 series is still noticeably better than your typical 5.1 system, but this depends on where you are sitting. The Jewel Cube speakers are not actually pushing the sound in a specific direction, they are just fooling your ears into thinking so with some creative engineering. If you’re sitting in the center of the room, you probably won’t notice a huge difference between the 650 and the 600. But when you’re not at the perfect focal point, that’s where the 650 really stands out.

Although positioning and separation are the primary benefits of the Lifestyle Series, don’t think that the pure audio quality is in any way inhibited. These tiny speakers are capable of very high volumes without even a hint of distortion or muddiness. You can expect crystal clear highs, detailed mids, and punchy lows. With this system, the clarity has come to a point where you no longer hear an “audio track”. Instead, you hear distinct elements. The sound of birds in the distance, traffic on the road, the rustling of clothing as characters move through a scene.

We’ve already covered the bass module in a separate review, but the subwoofer is among the best that we’ve ever encountered. If you’re considering this system, we highly recommend you check out our review here. 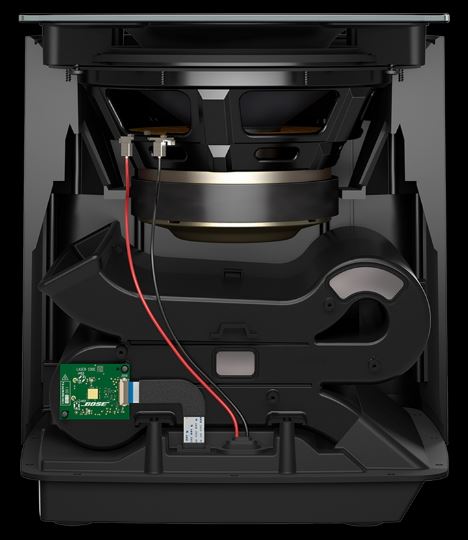 When you’re getting into audio equipment of this caliber, it’s not enough to have engineers design speakers that work well together. The size and shape of your room have a major factor on how well the speakers will perform. This is even more important with the Lifestyle 650 speakers, since they can project sound in any direction they choose. If the speakers unknowingly project sound into a wall, it will reflect and negatively impact the positioning.

Many home theaters alleviate this problem by having a technician come to your house and calibrate the audio system. When you’re spending this much on your home theater, a few hundred bucks for a professional calibration might not seem like a lot. But with the Bose Lifestyle system, the device will calibrate itself. 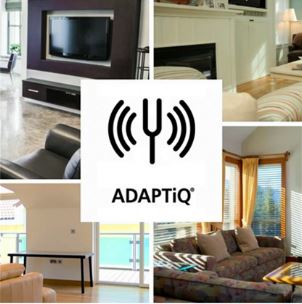 The system is called ADAPTiQ, and it’s brilliant in execution. The system includes a special pair of “headphones”. Although they’re called headphones, really they’re head-microphones. Instead of ear cups they have little plastic sleeves that sit just above your ears, each containing an incredibly sensitive microphone. You plug the headphones into the receiver, then sit in your favorite location in the room.

Wearing the headphones, you’ll need to sit in your favorite spot for about five to ten minutes. During this time, the speakers will play a variety of tones both from each speaker individually, then in different combinations. The process was a little odd, but as long as the speakers remain in the same place you will not need to perform a calibration again. This quick five-minute process saves you hundreds of dollars in technician fees, and the end result is a home theater that is perfectly tuned to the specific acoustics of your home.

Being the centerpiece of your home theater, the console needs to be able to connect with everything. For the time being, it appears to support every modern connection that is available. 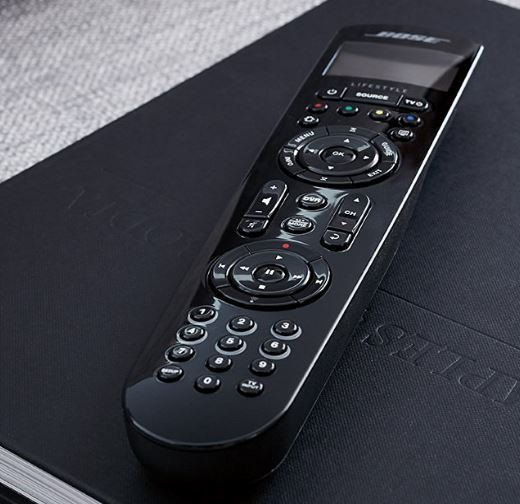 For video, you have six separate HDMI ports that should allow you to connect every device you own. These ports support the latest HDCP standard, making them compatible with 4K content. You also have an audio pass-through connection. Although uncommon, this will soon be a required feature. Once 4k content hits the market, optical pass-through will not work due to the copy-protection system. It’s inclusion makes this console pretty much future proof.

For other audio sources you are given two optical in ports, one optical out, two digital coaxial in, RCA, and a 3.5mm headset plug.

Into streaming? Out of the box, the console supports Spotify, Deezer, Pandora, Amazon Music, iHeartRadio, and Sirius XM. You can control these services from your phone or through the included menus of the console. If you want audio off your mobile device, you can connect using WiFi for lossless streaming of Bluetooth for compatibility. Syncing your phone or tablet is incredibly easy thanks to the included NFC. After you’ve paired your phone for the first time, all you’ll have to do is tap the phone on the console to re-sync. 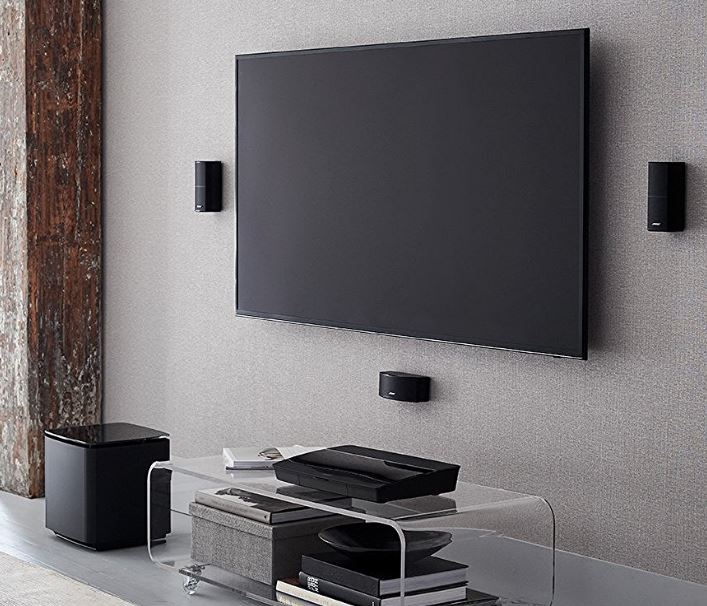 If you want the best audio system possible, we highly recommend the Bose Lifestyle series. Generally speaking, systems in this price tier are incredibly complex. But they’ve taken a complex problem and found a way to make it easy for consumers. Because it’s so easy to calibrate, you won’t be stuck with a highly specialized system that suddenly becomes inferior if you move it to another room or change the arrangement.

Which model should you choose, the 600 or the 650? This really depends on your usage scenario. If you’re often watching movies by yourself or with a partner, you probably won’t notice a huge difference between the two models. But if you’re often watching in a large group or entertaining, the 650’s true 360-degree sound projection is something that can be enjoyed by the entire room, and not just the person sitting in the center.

If you’re looking for a system that will primarily be used for music, this may not be the best choice. Music is almost exclusively recorded as a two channel stereo mix. Unless you’re listening to surround sound content, you won’t be able to take advantage of all the incredible features of the Lifestyle series.

But if you’re a serious movie buff who is unwilling to compromise on sound quality, the only choice you’ll need to make is whether you want the Lifestyle 600 or the Lifestyle 650.