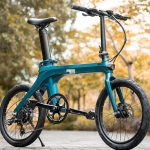 Bicycles have been around for a long time now. Look at an old Victorian postcard, and you’re liable to see someone riding a classic penny-farthing.

But technology has changed since then. It’s brought us bicycles for all kinds of purposes, from sleek racing bikes to fat-tired mountain bikes with shock-absorbers.

Electric bikes are the latest advancement in bicycling technology. These are hybrid vehicles that combine an electric motor with good old-fashioned pedal power.

The idea isn’t to completely replace pedaling. Some bikes will, although you won’t get much mileage in that mode. Instead, an electric bike is supposed to make it easier, especially when you’re going up a slope.

We’re about to review the Fiido X Folding Electric Bike. This is a sturdy electric bike with a tough magnesium alloy frame that collapses for storage and transport.

But what is it designed for, and what kind of performance should you expect? To make a worthwhile evaluation, we’ll have to dig deeper into its features and functions. Let’s get started, and see what we discover! 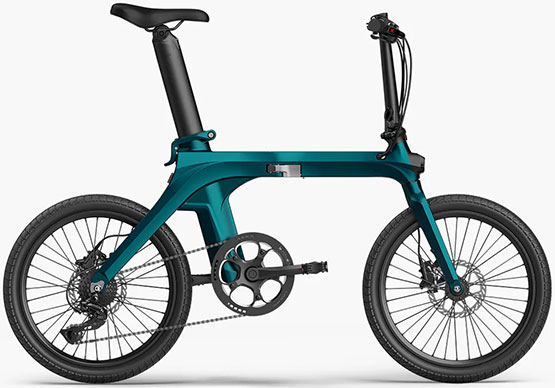 The first thing you’ll notice about the Fiido X Folding Electric Bike is its unusual frame. Instead of a traditional triangular frame, there’s only a single bar between the front and the back. To compensate for the fact that there’s only one bar, it’s exceptionally fat. It’s also unusually durable. This frame is made from magnesium alloy, which is far tougher than aluminum, carbon fiber, or even steel. It also has an attractive green finish that looks really sharp. 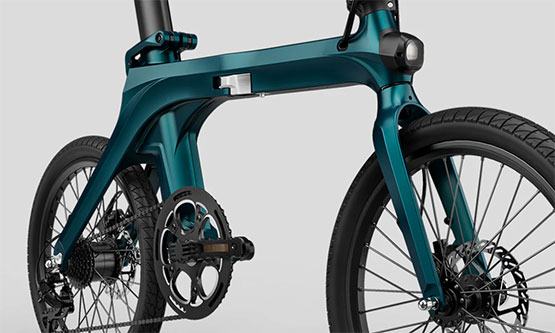 In the middle of the cross-bar is a hinge and a locking lever. When you disengage the lever, the hinge is free to swing, and the bike folds in half. A second lever at the base of the handlebars will also collapse them. Re-engage the lever, and the frame is as rigid as they come. You’d never imagine that it could fold back over on itself.

When fully collapsed, the Fiido X is very compact. It measures only 31.25 inches tall, 31.6 inches long, and 13.77 inches wide. At 43 pounds, it’s a bit heavy. But you can still roll it around, so you’ll rarely have to lift it. This weight is mostly because of the magnesium material, which is particularly dense. 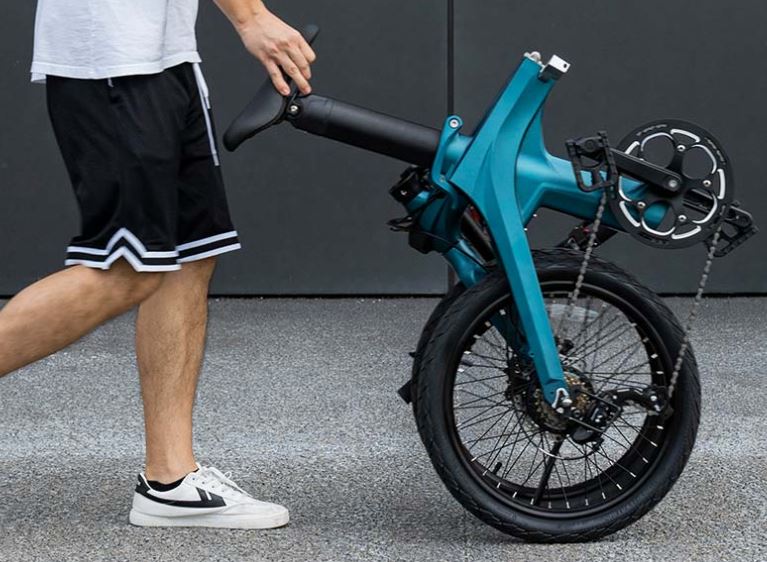 When it’s opened up, the bike measures 58.66 inches long, 23.1 inches wide, and 42.1 inches tall. The maximum load is 264.8 pounds. That’s not incredibly heavy, but it should accommodate most riders. The tires are 20 inches in diameter, which is a bit on the small side. But at 1.95 inches wide, they provide plenty of traction.

The Fiido X’s seat has a unisex design, and should be comfortable for most people. The padding isn’t incredibly thick. But it’s soft and provides plenty of cushion, and won’t form pressure points on a long ride. There’s a lever next to the seat which you can use to adjust the height. It has 9.84 inches of travel, which is a pretty generous amount. At its lowest, it will fit a 5-foot tall rider. At its tallest, a 6-foot 5-inch individual should be comfortable. 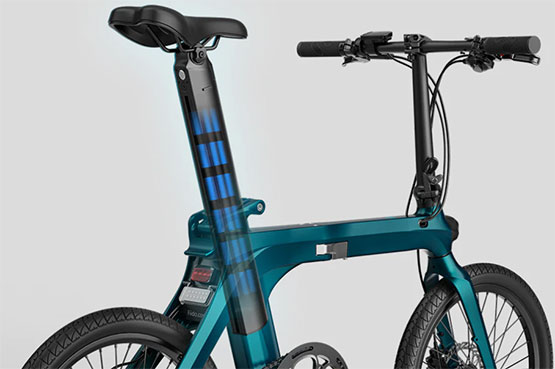 There are no shock absorbers on this bike. The frame is entirely rigid, which can make for a rough ride if you try to take it off road. We wouldn’t recommend doing that to begin with. The Fiido X’s frame might be unique, but it can’t withstand extremely rugged terrain, jumps, or stunts.

That said, this is really a commuter bike. And for that application, it works beautifully. When you’re riding on a sidewalk or a city street, you don’t typically encounter huge bumps. Just steer clear of potholes, and your ride should be nice and smooth. The fat tires go a long way here, since they provide a little bit of cushion. They don’t feel hard like the tires on a street bike.

The controls are located on a small LCD display, which is located on the left handlebar. The display itself shows some basic information about the bike. You’ll see your current battery level, speed, odometer, and headlight status. On the left are a pair of buttons that let you change the assistance level or reset the odometer. 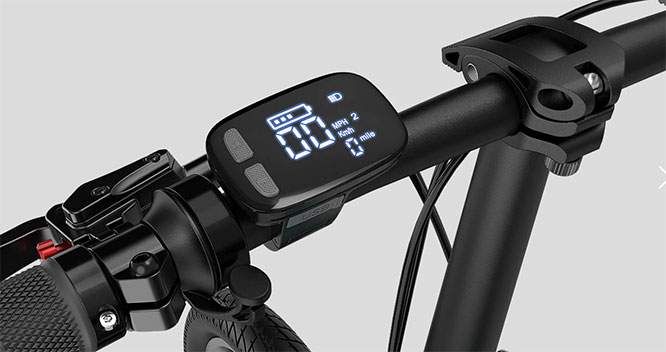 There is no throttle on this bike, which is both a good thing and a bad thing. On the downside, anyone who’s already ridden an electric bike will probably find it a bit basic. It lacks the “fun” factor of a traditional throttle, and you have less control over your speed.

On the upside, it’s great for people who are just buying their first electric bike. The rear wheel has an internal torque sensor that senses how hard you’re pedaling. The motor then provides assistance, to take some of the load off your legs.

There are three assistance levels to choose from. At level 1, the motor will provide a trickle of assistance, with a bit of a boost on hills. At level 3, the bike will practically ride itself, but your battery will drain faster. 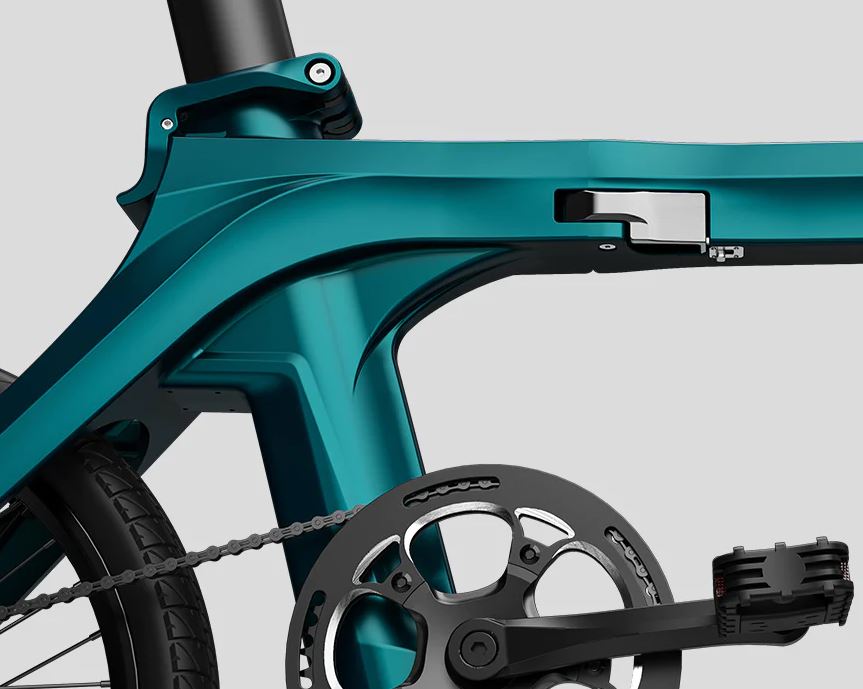 The Fiido X is as straightforward as they come. You hop on it, set your assistance level, and start pedaling. That’s all there is to it.

As far as performance goes, it will depend on your model. The X actually comes in two variants: one with a 250-watt motor, and another with a 350-watt motor. As you might expect, the 350-watt motor is more powerful. It provides a maximum powered speed of 19.2 MPH, as compared to 15.5 MPH for the 250-watt model.

The motor will provide assistance depending on your level setting. It will continue to do this up to the maximum speed; if you want to go faster, you’ll need strong legs. Another thing to be aware of is that the motor will stop providing assistance on a 25% or steeper slope.

When you come to a steep hill, you’ll need to switch into low gear and pedal your way up. This was a bit disappointing, since steep hills are when you could use the help the most. Pedaling across a flat road takes very little effort once you get moving.

Alternatively, you can just ride the bike in manual mode. The 7-speed transmission isn’t quite as versatile as a 15- or 21-speed. But the shifting mechanism is simpler, since there’s only one lever – on the right handlebar. 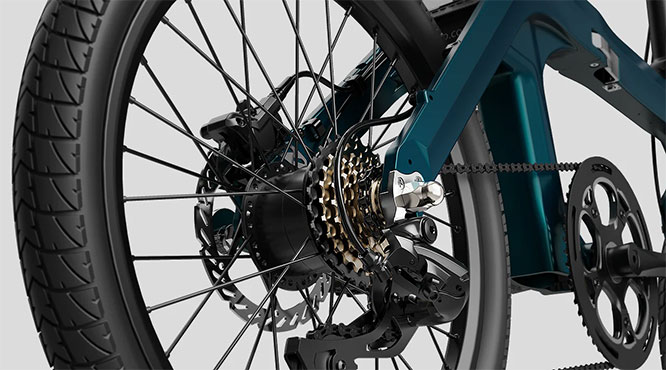 There’s also a rear derailleur only, not a front one, which means less maintenance and fewer points of failure. Besides which, seven speeds are plenty for most purposes. And let’s be honest. Can anyone really tell the difference between gear 1 and gear 2 on a 21-speed?

The brakes are hydraulic, rather than cable-operated. As a result, they’re far more powerful than traditional bicycle brakes, and they require no adjustment. That said, hydraulic systems are harder to service when they eventually start to lose pressure. 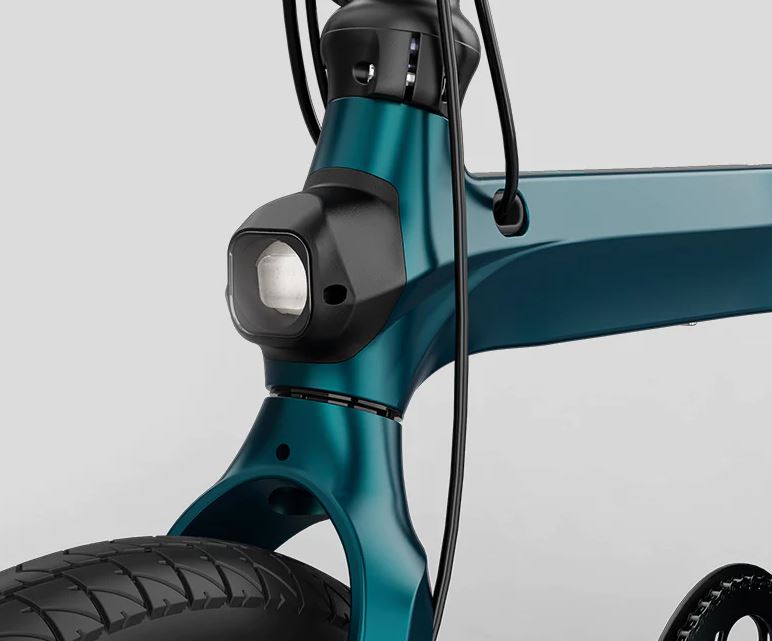 The Fiido X’s battery has a capacity of 417 watt-hours, and is located in the seat support shaft. To charge it, you simply pull out the seat and plug it into your wall with the included charger.

It takes about seven hours to fully charge, so you can easily charge it overnight. And it’s rated for 800 charge cycles. That means you can get years of use out of it before you start to notice a drop in capacity.

The exact range you’ll get out of the battery is a bit more murky. The 250-watt motor will draw less power, and has a maximum powered range of 80.7 miles. The 350-watt motor draws more power, and tops out at around 68 miles.

These are Fiido’s official ratings, but they assume you’re running the bike on the lowest assistance level. If you’re a dedicated cyclist, you might be doing that. But most commuters will probably be running on level 2 or level 3. This will significantly reduce your maximum range. Then again, you’re probably not trying to ride your bike more than around 10 miles anyway. 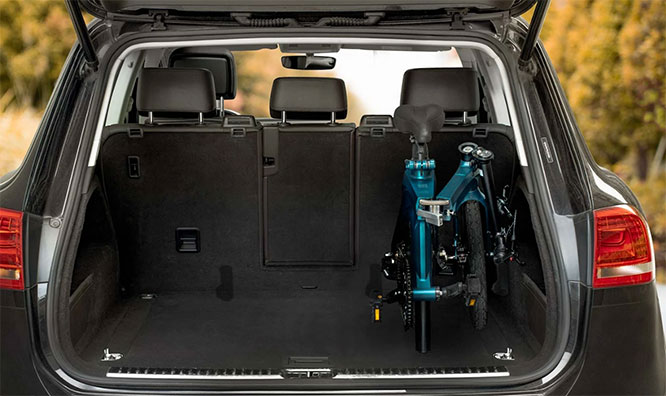 The Fiido X comes with a few bonus features that are worth mentioning. To begin with, there’s a headlight located on the front, beneath the handlebars. This headlight provides excellent night visibility, and also makes it easy for drivers to see you. The rear LED is very bright, and is unmistakable even under a dim light. 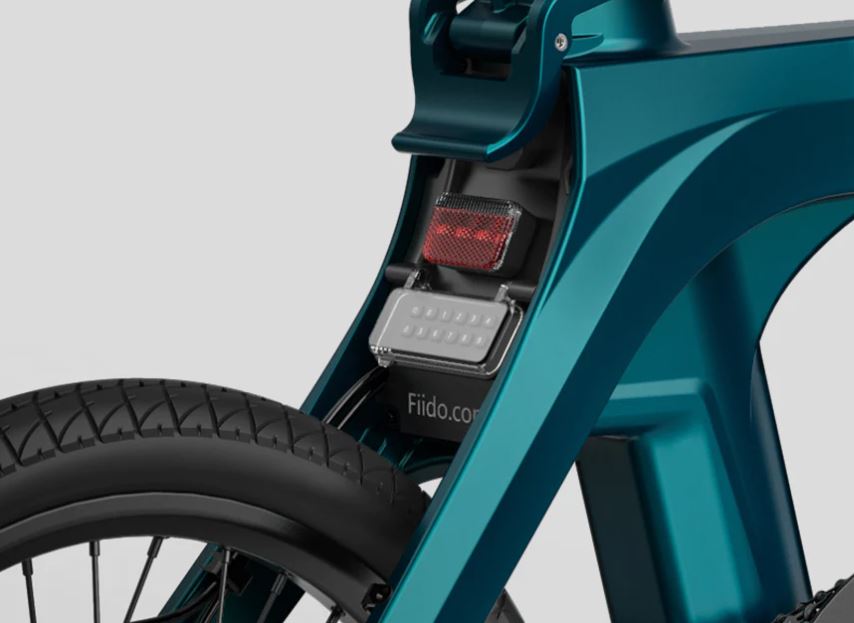 Near your left thumb is a small pusher that operates a horn. It’s not absurdly loud. But it’s useful for warning pedestrians and other cyclists of your approach.

The most unique feature of this bike is the PIN pad lock. The pad is located on the back of the bike, just beneath the rear light. A clear plastic cover keeps rain off it when you’re not actually using it.

When you enter your PIN number, it locks out the battery. This makes the Fiido X undesirable for would-be thieves, since the motor function wouldn’t function. That way, you don’t have to take out the battery every time you park your bike. Enter your PIN a second time, and you’re ready to ride. 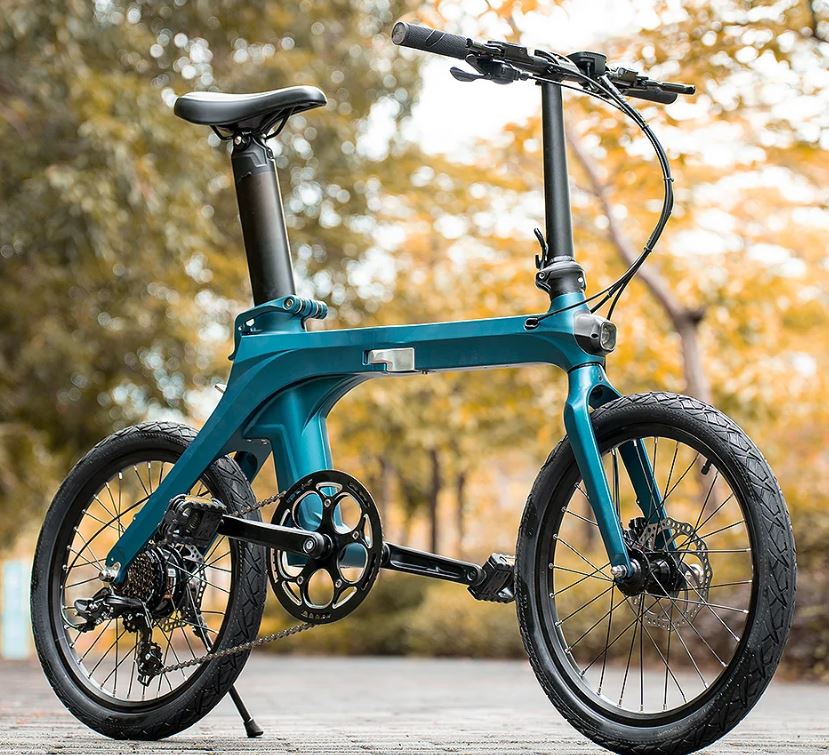 The Fiido X Folding Electric Bike is a unique electric bicycle with no throttle. This design will probably not appeal to existing electric bike owners. But if you’re a beginner, the learning curve will be much shallower. Instead of running a throttle, you just pedal like it’s a regular bike.

We liked the battery technology and motor power, particularly the relatively long range. Charging is simple and straightforward, and the PIN pad is a fantastic security feature. Add that to a rugged, collapsible frame, and you’re looking at a clear winner.

The Ultimate Guide to the Best Biometric Fingerprint …
March 2, 2020