These days, instant cameras are all the rage. What was once a popular trend back in the 70’s and 80’s, has experienced a resurgence in popularity. Some of this has to do with the similarities between the old-school Polaroid and modern social media apps like Instagram. But that’s far from the only reason.

We’ve always been drawn to the medium due to the tactile nature of it. After you take a shot, you get to hold something tangible in your hand. Instead of the “instant gratification” we’re used to with digital mediums, you get to watch with anticipation as your photo slowly fades in from a whitewashed pane. But most importantly, what you see is what you get. There is no way to change filters, so you’re leaving it up to the universe to decide how your photos turn out.

We’ve already taken a look at some of the best instant print cameras on the market, but Fujifilm has just released their latest update to the popular Instax camera line. What we liked about the Instax was that it was so much more than just a simple throwback to simpler times. With many years in the camera industry, they took a popular form factor and made a camera that was actually good. When they announced the latest update, we couldn’t wait to see what improvements had been made. To find out, we had to try the Fujifilm Instax Mini 9 out for ourselves. 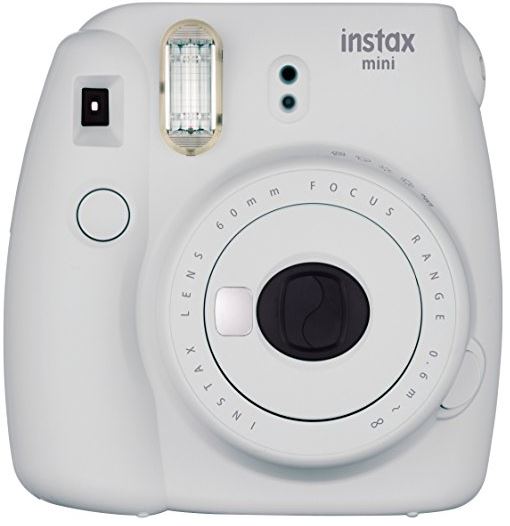 If you’re not familiar with this style of camera, let’s take a quick look at how it works. Old-school instant print cameras used a very special type of film. They are a small paper frame that contains a single sheet of chemically treated material. When exposed to light, this material would change color to replicate the image that you saw outside.

Instant print cameras, technically, weren’t as good as SLR cameras. The colors were a little off, and the focus wasn’t perfect. But the warm, dreamy look of the photos was appealing to most. It’s not a technical appeal, but an artistic appeal. This lead to the cameras widespread use. Today, modern cameras try to replicate with a digital image sensor and a built-in printer. But the Instax series is popular because it uses real film. This isn’t just a cheap simulation of the classic style, this is the real deal. There are many advantages, but a few trade offs. To find out if this is a camera for you, let’s go in-depth. 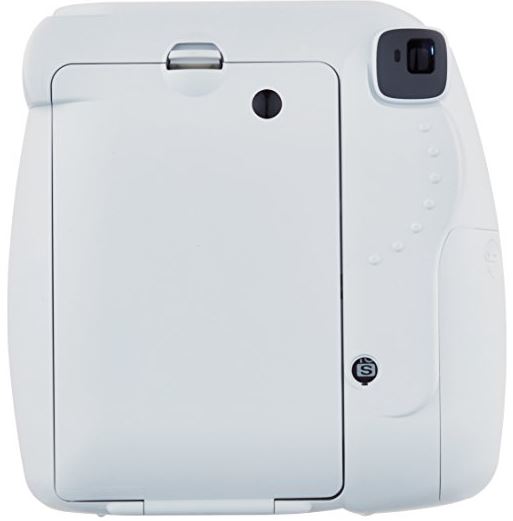 In many ways, the Fujifilm Instax Mini 9 looks very similar to the Mini 8. It’s almost square in shape, with a rounded grip making it easier to hold. Due to the shape, you’re able to orient it any way you like. The film isn’t perfectly square, so this is to enable you to choose between portrait and landscape images. There are five different colors available, each of them very vibrant and peppy. You can choose blue, pink, baby blue, lime green, or white. Other than the color, each model functions exactly the same.

One key difference from the old model is the inclusion of a selfie mirror. This is a small mirror right on the lens, so you can see yourself when taking a photo. Selfies were very hard with the old version, so we’re happy to see this made easier. 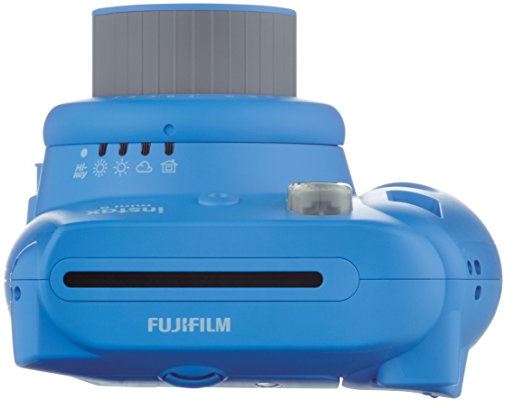 Front and center, the most obvious part of the camera is the massive lens. The front facing lens actually only occupies a very small space, with the rest of the internal dimensions left open for light travel. There is a ring around the lens that corresponds to different modes, allowing you to change the light sensitivity. To the left of that is the shutter, followed by the flash and the light sensor.

The back is fairly plain. You’ve got a large door to install the film, a grippy marking for your thumb, and a range finder to look through. On top, there is a large slot where your photos are ejected from.

Overall, the camera is very straightforward to use, and it has a very youthful look about it. We almost prefer the design to the sleek modern appearance of many cameras, as the look is much more representative of how the camera works. 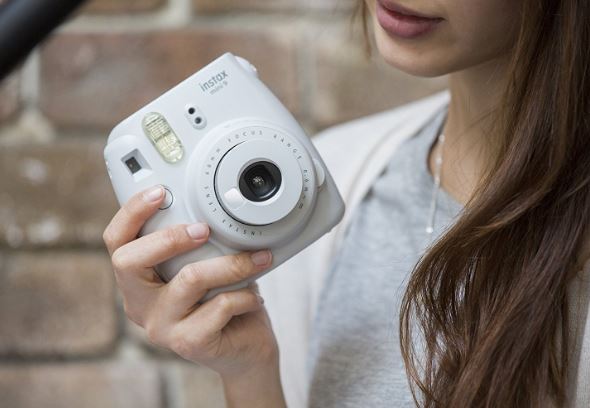 The film is the backbone of this camera, perhaps almost as important as the camera itself. It comes in packages of 10 sheets, with each pack contained in a compact plastic cartridge. In addition, it can be purchased in larger increments, saving you a bit of money. But a 20 pack or 40 pack is simply multiple cartridges, each with 10 sheets in them.

The print area is 6.2 by 4.6 centimeters, which is fairly compact. Many users have successfully scanned the images to make larger prints, but the compact size is part of the appeal. The printed images are almost like little keepsakes, and can easily fit in a wallet. 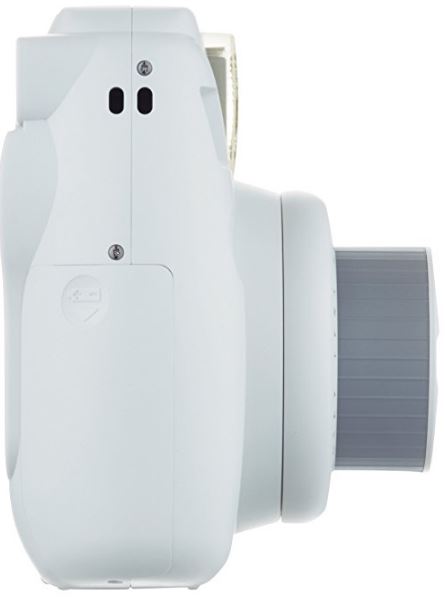 How do the images look? They’re definitely a little different that you’re used to seeing. The edges of objects and people are slightly blurred, the coloring has a fuzzy haze to it, and fine details are almost lost in the murk. But once you hold one in your hand, you’ll really be able to appreciate it. The photos have emption. They’re not capturing a specific thing, but a specific feeling. Think of it like and old record that you’ve played hundreds of times. The music might not be perfect, but it still gives you a certain feeling. You’re not capturing objects. You’re capturing moments.

Using the camera is extremely straight forward, although there are a few things you need to know. The first thing you do is remove the film door and install the film package. This isn’t a solid plastic box, the back is spring loaded, so it can feed the individual films one at a time into the loading mechanism. Because this is pressure sensitive, it’s important not to pinch of crush the film. There is a white dot that you line up with another dot on the back of the camera, and it just slips into place. You then press the shutter button once. The first sheet is blank, designed to protect the film from light, so nothing will print here except for a plain page that says “this is not a film”. 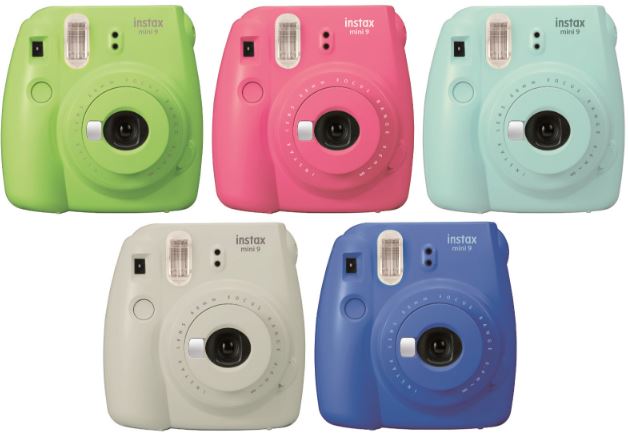 Next, you look at the front of the camera. There is a light meter that determines how much light the camera should be let in. From the top down, you’ve got an icon that represents a house, clouds, a sun with a few rays, a sun with lots of rays, and one that says “Hi-Key.” Basically, these symbol s represent different amounts of light from darkest to lightest. There is an LED light next to all of them. The camera automatically detects which one should be used, and lights up the one next to it. Turn the dial to this setting, and hit the shutter button.

Now, your film will print out. At first, it’s plain white. But over the next 40 seconds, your image will slowly fade in.

We found the brightness indicator to be extremely accurate. But there is one feature that is not obvious – Hi-Key. What exactly is this? What this does is make the film brighter than you intended. Let’s say that you’re taking a photo in a dark alley. At the end of the alley, you can see the street with regular daylight. A standard photo would have the background properly exposed, but the rest would remain dark. In Hi-Key mode, the background would be completely light, but everything within the alley would be properly exposed. So, you should use this setting any time you have an unreasonably bright background. 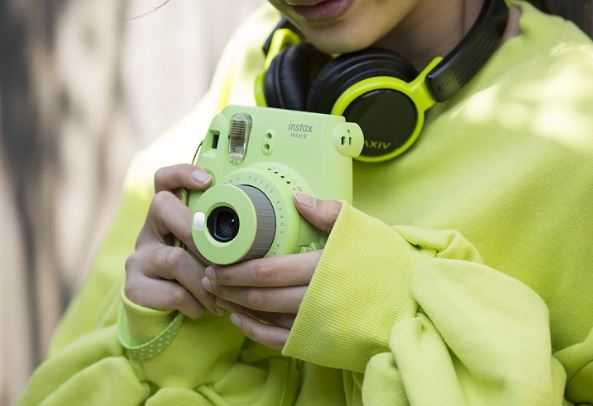 Really, it will only take you one our two pictures to figure this camera out. We were taking great looking shots from the first try, and this should be easy to replicate.

As with any film camera, the cost of prints are a little higher than a digital format. If you’re not really after the classic film look, this won’t be an asset to you. But if you love the look, then the original will outpace a replication any day of the week. 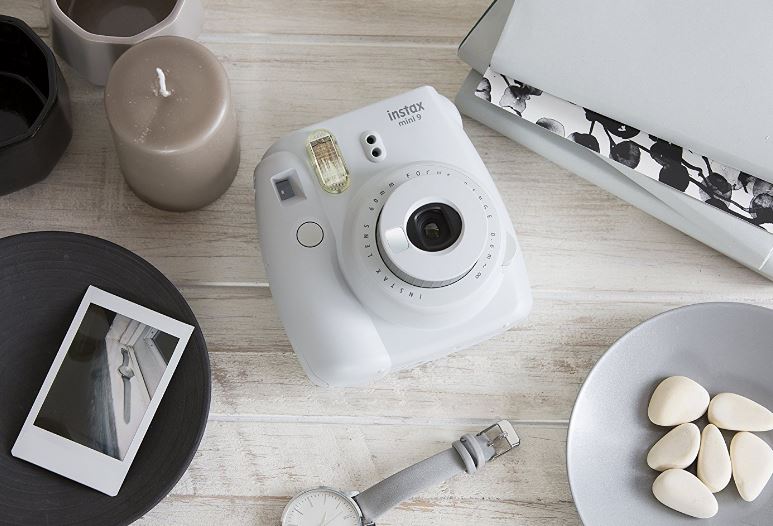 We’ve always loved the Instax series of cameras. With the Instax 8, Fujifilm really hit it out of the park. With the Instax Mini 9, they’ve tweaked the design, added some great new colors, and improved on what little shortcomings the old version had.

Would we recommend upgrading from the 8 to the 9? Probably not. Both are great cameras, and you don’t get a lot extra with the new model. But if you don’t have an Instax camera yet, we would definitely recommend that you go with the latest model.