But there is one industry that took a different approach. Instant print cameras are, on paper, obsolete. But Polaroid proved to us that these cameras were still fun, and the demand was huge.

Instant print cameras come in two flavors. Most are digital, using special paper to print out your shots. Fujifilm makes some of the only instant film cameras on the market. Consumers love them because they have the most authentic look. The SQ10 is a fusion between these two technologies. It captures photos digitally, but prints them on film. How is this possible? We decided to find out for ourselves. 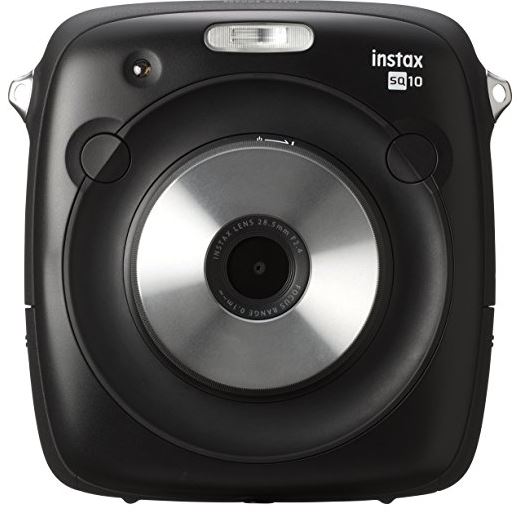 The appearance of the Fujifilm Instax Square SQ10 is iconic. With a combination of the shiny round lens and the squared off black body, these two design elements contrast each other and create something that is simply eye-catching. It’s roughly 6.5 inches in both height and width. This makes it a little too big to put in your pocket, but still very comfortable to hold in the hand. The shutter buttons are built into the large recession that circles the lens, with one on each side so you can hold it in either hand.

Flipping it over, you’ll find a large LCD display and a circular command dial. This works a little like the old touchpad on an iPod, with several buttons around the ring to call up certain commands. Overall, the camera is visually appealing, and the controls are laid out in a simple and easy to use manner. 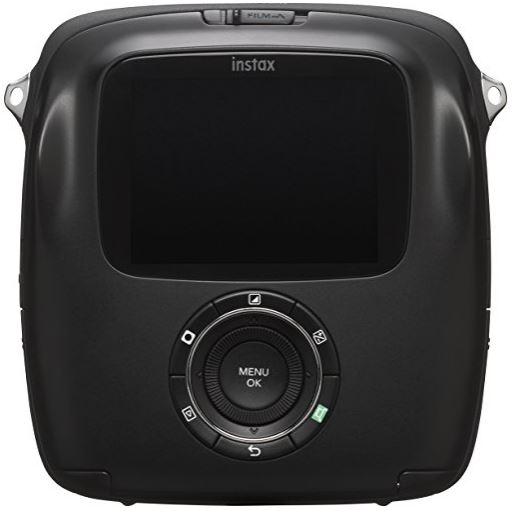 The image sensor in the SQ10 measures only 0.25 inches diagonally, making it roughly have the size of what you’ll find in a standard digital camera. It produces images with a resolution of 3.6 megapixels, which works out to be 1920 x 1920 pixels. Much like the Polaroid cameras of the 70s, these pictures are completely square.

On paper, 3.6 megapixels seems pretty low. But when you compare it to most instant print cameras on the market, this is actually a step up. If you think about it in terms of screen resolution, a 1080p film is 1920×1080. With this in mind, the images of this camera have more vertical pixels than high definition. For this application, it’s one of the best image sensors on the market.

Although the sensor itself isn’t ideal in low light, the lens really helps with this. With an aperture of f/2.8, it is several times brighter than the f/8 lens found in the film based Instax cameras.

The images have a very wide angle, which is common for this format. For reference purposes, the focal length of your eye is 50mm. An image taken with a 100mm focal length would be heavily zoomed in. This camera has an equivalent focal length of 28mm. This means that it’s great for landscape shots, or selfies. You get capture a lot of your environment, although there isn’t much room for close ups.

The end result is images that are bright, vibrant, and detailed. They aren’t quite as good as what you’d get from a dedicated digital camera, but they have a similar color balance. Images are reproduced accurately, and appear true to life. There is a small amount of grain when shooting in the dark, but it’s nothing major. Compared to the film versions which are nearly useless in dark environments, this is a huge step forward. 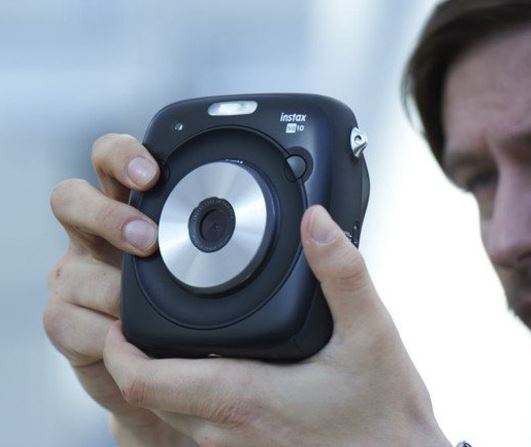 People love these cameras because they are a throwback to the classic Polaroid. Although the images aren’t perfectly color accurate, people love the end result. Straight off the sensor, these photos don’t look anything like what you’d find on Instagram, but that’s where the editing suite comes in.

The most basic (and likely the most popular) feature is the filters. There are 10 different filters to choose from in total. Just like Instagram, they all have names like “Cornelius,” “Luna,” “Martini,” and so on. They do a pretty good job of adjusting the hue, and giving your photo a bit of atmosphere. If you want a little more control, you can also adjust each color individually, creating the environment of your choosing. 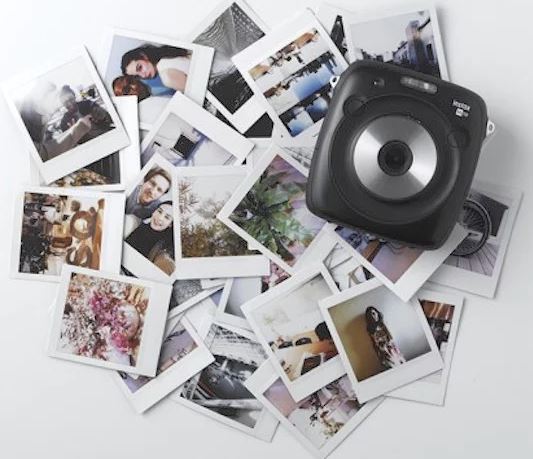 The next feature you’ll be likely to use is the vignette. This is that round area around the photo that is either faded out, or brighter. The vignette is really what gives images the analog look. Instagram chooses to include vignette as part of their filters, but Fijifilm lets you control them manually. Vignettes can be set with a range from 0 (neutral) all the way up to 100 (dark) or -100 (bright).

Finally, you’re given a few standard controls for basic image editing. You can change the brightness, contrast, or use digital zoom. Photos can be zoomed in up to 2x. This is handy from time to time, but there is definitely a bit of quality loss when zooming, so we wouldn’t want to rely on this all the time.

The printer is really what intrigued us the most. The main selling point of the instax line is the fact that they use real film, giving your photos a feel that you can never get with digital. It turns out, this is actual film. How does it work? 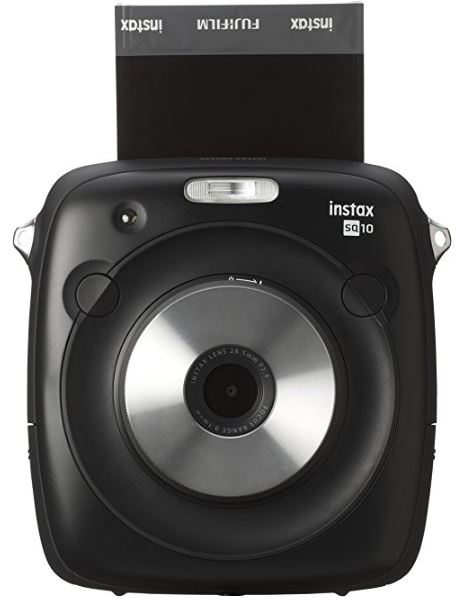 There is a second display inside the camera. Film sits below it, and the printer uses an OLED display to expose the film correctly. Once the print is done, you get something that is unmistakably film. The main advantage of this is that your pictures look better than anything that comes out of a Zink printer, but the disadvantage is that your print doesn’t perfectly match what you saw on the display.

The photos themselves are 3.4 by 2.8 inches, including the border. The print area is a square 2.4 x 2.4 inches. This is a lot bigger than most instant print cameras, and the results are a lot more enjoyable to look at.

In terms of basic usage, the Instax Square works a lot like a normal digital camera. There is only a single port on the side – A Micro-USB – which is used for both charging and downloading your photos. You can store up to 160 photos on the internal memory, and the battery allows you to take 50 on a single charge. If you want more storage, there is an SD card slot on the side, so you can expand it to the size of your choosing. Since the photos are so small, a single 4GB card could hold thousands. 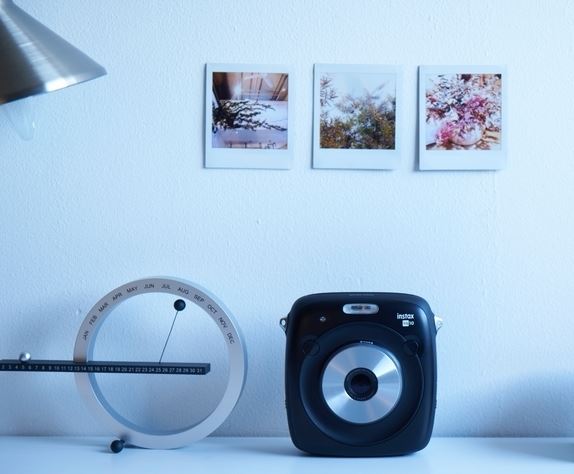 As far as price is concerned, the SQ10 does cost a little more up front than other instant print cameras. However, the film is still the same price. The film is the biggest issue with these cameras. At over a buck a shot, a single bad photo can be a real frustration. But this is where this hybrid style camera shines. You get the opportunity to look over your photos beforehand, and choose what you want to print.

With this in mind, somebody owning one of these would end up spending significantly less money than a film only version. For that reason, we’d call this a good buy. 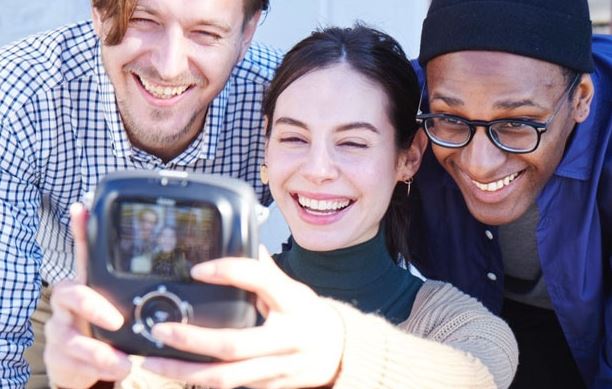 As far as instant print cameras go, the photo quality is amazing. But compared to a full size camera, or even your phone for that matter, the images just don’t look quite as sharp. It’s important to keep in mind what this camera actually is. It’s a fun little device that creates unique keepsakes – not something you’re going to want to use to document your life with.

As certified retro junkies, we have to admit that we love instant print cameras. They’re fun to use, they’ve got a very artistic appeal about them, and there is no shortage of options on the market. However, there is one problem. Consumers are forced to make a choice. On one side of the table, you’ve got the Zink printers. They provide you with all the conveniences of digital, at the expense of the authentic feel that film has. On the other side, you’ve got the film based cameras. Most consumers agree that these produce the best-looking images, but you’re going to have to have deep pockets if you want to use them regularly. 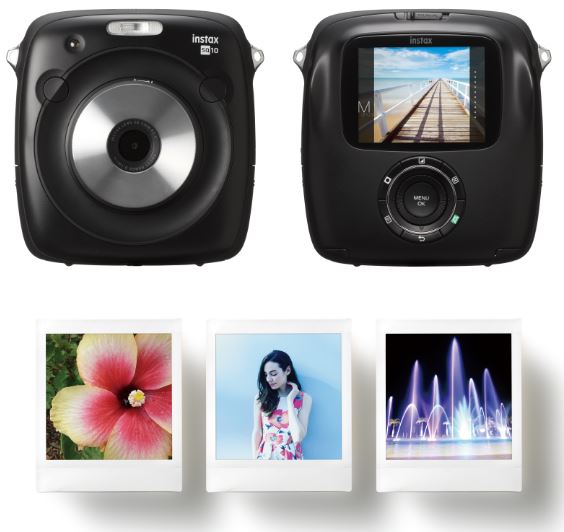 Fijifilm, the previous king of analog instant print cameras, has provided you with an alternative. The SQ10 is the much-anticipated hybrid camera, finally combining the best parts of digital with the best parts of analog. You do pay a little more for the camera itself, but the amount of money you’ll save on film more than makes up for it. With the ability to preview and edit your images, you can make sure that every shot counts.

Whether this is you first instant print camera or an upgrade, we’d highly recommend the Instax Square SQ10 to any user.