Close your eyes and, for a moment, imagine your dream home theater system. What do you see? If you’re a techy like we are, you’ve probably got something unique in there. Maybe there is a specific piece of audio equipment you’ve always wanted to own. Or, perhaps you’ve dreamed up an ideal layout that will allow you and all of your friends to enjoy an optimal seating position. But we’d be willing to bet that these dream systems all have one thing in common: a projector.

Projectors aren’t nearly as popular as standard, flat panel televisions. But that’s not because LCD technology is better. It’s because there are limitations with projectors. You can put a TV wherever you see fit. Even if you don’t have any floor-space, all you need is a bare wall and a couple bolts. But when you start looking at projectors, the size and shape of the room become a concern.

In order to create a large screen, the projector needs to be positioned a certain distance from the wall. For most of us, these special limitations mean that projectors are never a good option.

LG has an option that can change all of that. Not only is the PF1000UA pretty reasonably priced, but it’s designed in such a way that even the smallest room can enjoy screen sizes of up to 100 inches. On paper, this projector looks significantly better than most competing models. When we first stumbled across it, the question on our minds was, “What’s the catch?”.

To find out, we decided we would try it out for ourselves. Let’s go in-depth and see what this projector has to offer, and find out whether it’s a good buy. 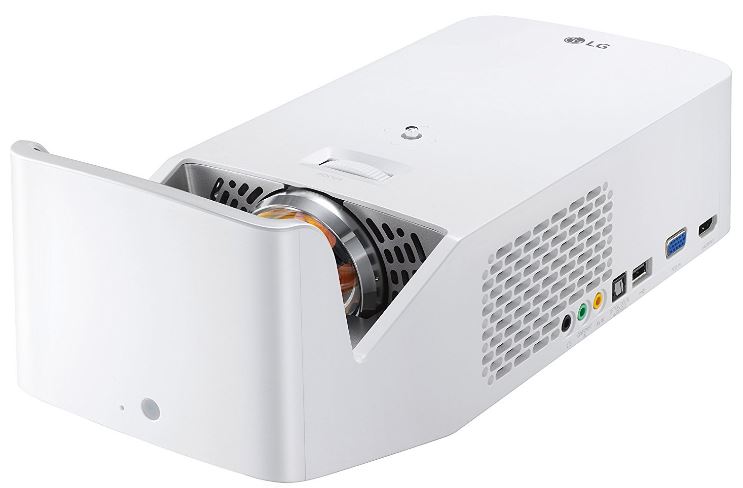 Aside from the odd-looking optics, the LG PF1000UA Ultra Short Throw Projector has a lot in common with the models we’re used to testing. It supports all of the most common video inputs, including HDMI, VGA, MLH, and can even receive over the air streams. There are two models of this projector, with the only difference between them being WebOS. WebOS is the operating system used on LGs smart TVs, turning this simple projector into an all-inclusive multimedia hub. It’s certainly checked off all of our boxes, but the ultimate test will be how it looks.

Where resolution is concerned, we’re at a bit of an awkward transitionary time. 4K is no longer a premium technology reserved exclusively for the early adopters. There is lots of content, and many devices that can play back 4K. But due to the nature of projection, 4K just isn’t totally viable. Projectors take a tiny image and blow it up, and there isn’t a good way to shove that many pixels into such a small space. 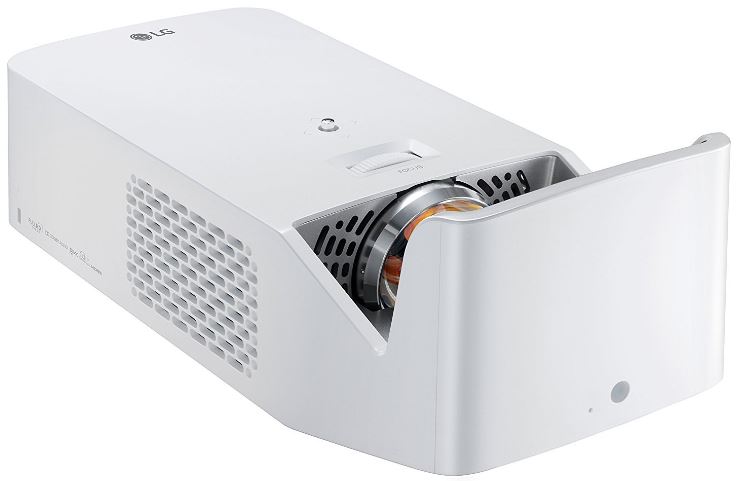 In this price bracket, 1080p is the standard option. On paper, this isn’t very impressive. But once we turned it on, we were blown away. The sharpness and detail that the PF1000UA produces drastically exceeds what we’re used to. Fine details were visible and easy to pick out. Textures looked natural and clean, and the overall image was very precise. This has a lot to do with the technology used in this projector.

DLP, also referred to as 3LCD, is still the most common method of generating an image. Instead of one tiny color display, manufacturers use three monochrome displays. Each of these displays has a filter on it. One is red, one is green, and one is blue. The image from each of these screens is all broadcasted on top of one another. The problem is that these tiny little pixels never line up perfectly. Even though there is 1080 lines of resolution, the image is slightly blurred. 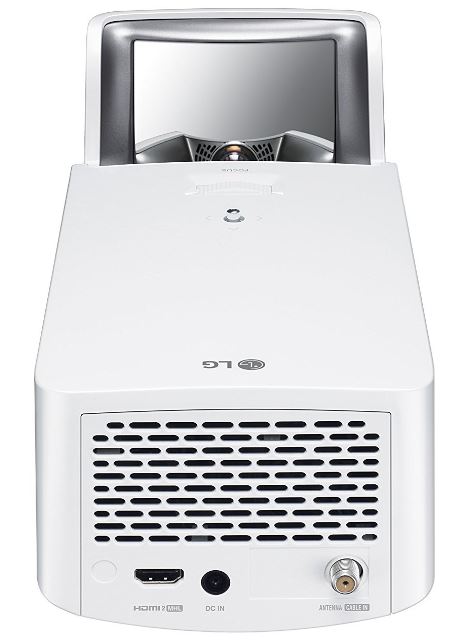 Instead, LG opted to use Tri-color LEDs to create the image. This means that the light source and the internal display are actually one in the same. Since each individual pixel can produce all three colors of light (and any combination of them) you don’t get the blurring like you do with some projectors. The resolution may be the same, but the image seems so much more crisp.

LG certainly isn’t the only manufacturer using this technology, but it’s generally found in higher end models. There are mixed reviews on it. Professional users do not like LED projectors because the colors are so vibrant. For text, documents, and diagrams, it’s better if things look as natural as possible. But for movie buffs, this is the best option there is. Vibrant colors mean that your video is much more cinematic and engaging. The image is able to accurately capture the mood that the producer intended, enhancing the profound effects of the large screen.

We’ve always been amazed by optical technology. Take cameras, for instance. An image that is literally life-sized is gently pitched and shifted through a series of shaped pieces of glass, eventually shrunk down to the size of a postage stamp. Tiny imperfections that can’t be seen by the human eye can result in enough distortion to ruin the entire image. The level of precision required to produce this glass in almost unbelievable. 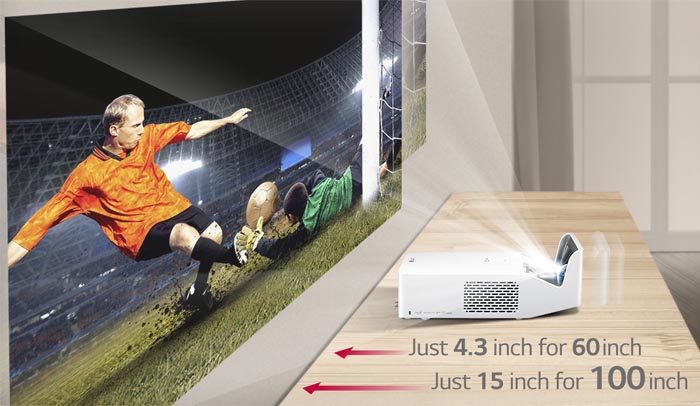 Each piece of glass in a lens is called an element. In theory, you could get away with just one element. However, that single piece of glass would have to bend the light quite a lot. The more you drastically you change the direction of the light, the more obvious flaws in the glass will become.

Instead of using one piece of glass that bends the light a lot, projectors have many lenses, each of which only changes the direction a tiny bit. Even if there are flaws, it’s almost imperceptible. This is also the reason why projectors need to be so far back from the screen. When light is changed slowly over a long distance, you have to extend that distance to get the size you want.

Based on the above, short throw projectors must cost a fortune, right? Well, LG found a way around that problem. In many ways, it’s brilliant. They made the projector face backwards. When you look at the lens, you’ll see that it’s shaped very strangely. It’s spherical like we’re used to seeing. Instead, it’s almost cone-like in shape. This is not a perfect lens. The light is heavily distorted, stretched in ways that (on its own) would never make a good image. 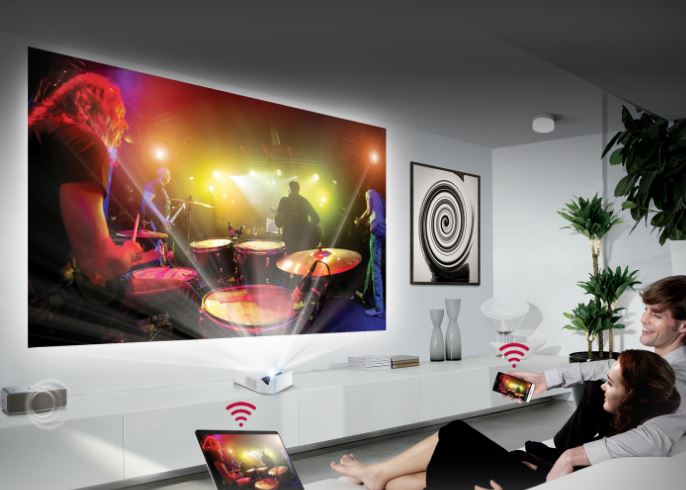 Almost immediately after the warped light leaves the lens, it hits a mirror. Not a square mirror like you’re used to. This mirror is bent and warped just like the ones you’d find in a carnival fun house. The mirror reverses the direction of the light, and warps the light in the exact opposite way of the final element.

The end result? A perfectly square and undistorted image. Because the light changes over a very short distance, you can get massive screen sizes even with the projector pushed right up against the wall. At a distance of five inches, you get a screen size of 60.” Add less than a foot of distance, and you’ve now got a 100” screen. This size is considered the “sweet spot” for projectors, and we’re willing to bet that every one of you can space 15 inches of space.

We’re happy with how the projector looks. Now we need to find out if it will work with our devices. LG made sure to include a diverse range of connectors, so you should be able to enjoy media from virtually any source. 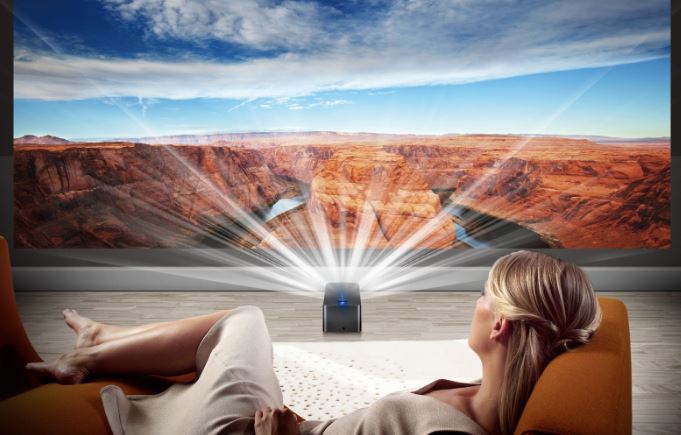 For most people, the HDMI port will be used the most. While LG gives you only one of every other port, you do get two HDMIs. Since most of us have at least two media sources, we’re happy to see this. But one of the things that stands out is the support for MHL. MHL is only supported on the second port at the back of the projector, but this feature is not very common. This allows you to use a Micro-USB to HDMI adapter with your smartphone. Most modern phones will then mirror their display on the projector, so you have a truly portable media system.

The HDMI ports are also compatible with DisplayPort and DVI. While those two ports are not provided, you can use an adapter if you like. If your computer doesn’t have HDMI, you can also choose to use analog RGB through the VGA port.

For standard definition media, a composite input is provided. However, you do need to get a 3.5mm to RCA adapter, which LG sells. You are also able to connect an antenna and tune in to free over the air HD streams, which are becoming increasingly more common.

For audio, LG gives you the choice of digital or analog. You can do audio over HDMI, optical, or even 3.5mm. If you have a Bluetooth stereo, the signal can be rebroadcasted wirelessly.

If you’re willing to spend a little extra money, you can get the “WebOS” version of this projector. In essence, WebOS is the difference between a smart TV and a regular one. This is LGs operating system, built on top of an operating system originally designed for the Palm Pre. It’s a little more advanced than many Smart TV systems, working more like a mobile phone than a TV that happens to be able to watch Netflix. There is an app store, and most modern social networks have an app. You can use all of the most popular streaming services directly through your remote, or wirelessly stream files from a local network.

Is it work the money? That really depends. WebOS is a great multimedia interface. If you don’t have a gaming console, media center, or laptop that you’re willing to plug in, then the simplicity and ease of use that comes with WebOS is a great buy. But for some, there is no sense in paying extra for something that you could get by plugging your laptop into the HDMI port.

Depending on how you intend to use this projector, the brightness could be a disadvantage. In a dark room, the image is great. But when you’ve got the blinds open or all the lights on, it appears a little washed out. The fact that you have to watch this in the dark would make us apprehensive to use it as our primary TV, but if you’re looking for something to make your movie nights that much better, then this would be a great secondary option. 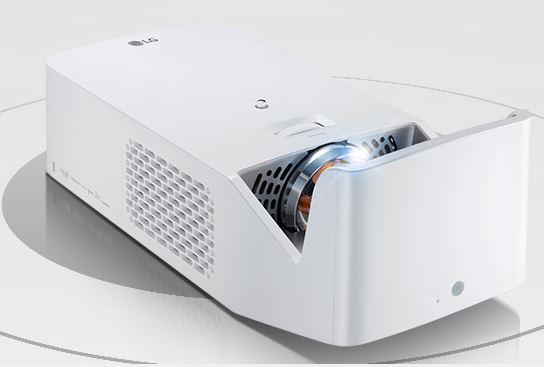 The LG PF1000UA is a unique solution to a common problem. If you’ve always wanted to see what it would be like to have a 100” screen, then this is your ticket. Whether you’re in a loft or a multi-story house, this projector operates without the physical limitations found on other models. When it’s time to make some popcorn and sit down for a movie night, LG’s short throw projector will save you from disappointment.

Have a large movie room? If so, you might want to consider another option. We just took a look at LG’s HF80JA – one of the first laser projectors on the market. It does require a longer throw distance, but it’s quite a bit brighter. For those with the space, this could be a good alternative.