There is no question that our mobile devices have changed the way we live. These days, it’s almost expected that we’ll have the ability to communicate at all times. Going offline has the potential to negatively impact our safety, our career, and even our social life. For the most part, there is very little reason to worry that this would ever happen. But when we’re out in the woods, the situation is very different.

When consumers want to squeeze a little extra battery life out of their phones, a common solution is portable batteries. But even if you get the biggest batteries on the market, power will always be a finite resource. Goal Zero has made a name for themselves by addressing this problem head-on. We’ve already had the opportunity to try out the Yeti 400 lithium battery, as well as the larger Yeti 1400. The Nomad-series solar panels are sold as an accessory to these handy batteries, but can also be on their own. Is this the ultimate solution for portable power on the go? We wanted to find out for ourselves. 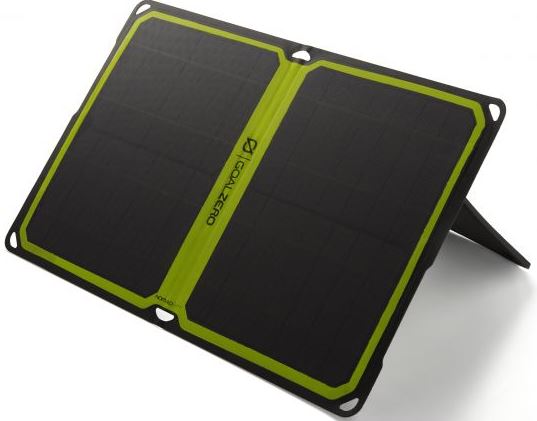 There are two versions of the Goal Zero Nomad Plus available – the 14, and the 28. These numbers refer to their total power output. The 28 pumps out 28 watts, and the 14 produces 14 watts. Originally, these panels were exclusively for use with a Goal Zero battery. With the release of the Nomad Plus, there is now a built in charge controller that lets you power up your devices straight from the panel. Goal Zero developed these panels with the active outdoorsman in mind, creating a durable system that can survive almost any environment. 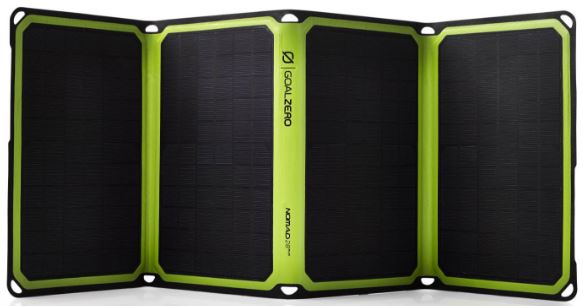 When holding it in your hand, it’s pretty obvious that the Nomad Plus isn’t an ordinary solar panel. Both the 14 and the 28-fold up to a 12.1 inches x 7.9 inches, roughly the size of a sheet of paper. Unfolded, the 14 doubles in width while the 28 expands to four times its size. In reality, each of these panels are the same size. But the Nomad 28 includes four panels, while the 14 includes two.

The Nomad is protected with a high-quality fabric case. Each corner has a rubber bumper on it, which doubles as a loop that you can use to tie it down. On the back, there is a kickstand that opens up, allowing you to get the correct angle on the panels. Next to the kick stand, you’ll find a zipper. This opens up to a little pocket that you can store all of your cables in when not in use. You can even slip a phone in there so you don’t have to leave it exposed while charging. 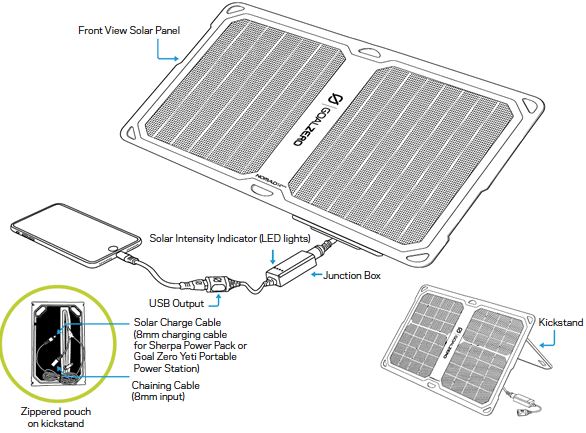 The Nomad Plus is completely water, heat, and drop resistant, but this applies only to the solar panels itself. The pocket isn’t sealed. Although we wouldn’t have any problem leaving it out while it’s raining, you’ll find that charging your phone in poor weather conditions is a bad idea.

While the appearance is fairly simple, the lime green accents give it a very aggressive look. There is no doubt in our mind that this is a serious piece of kit, highlighted by the fact that it is more visually appealing than any other solar panel on the market. 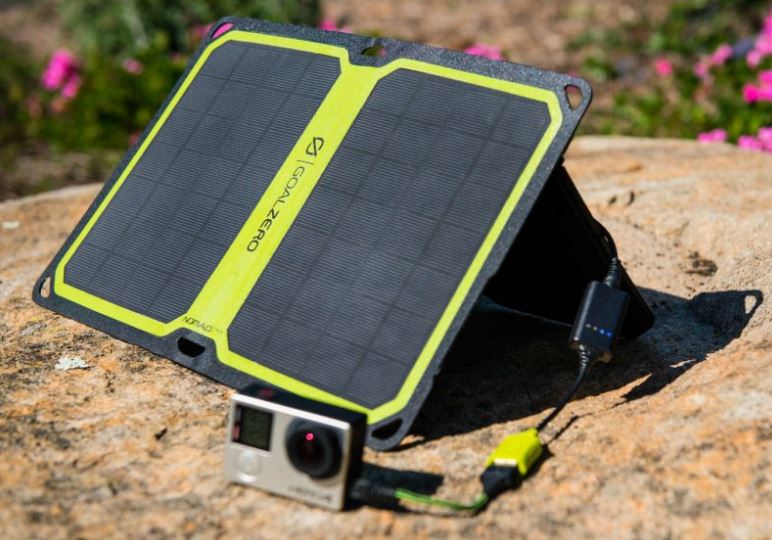 Whether you’ve found yourself disappointed with a cheap solar panel before, or simply haven’t had the chance to use one, it’s important to understand how they work before you can decide if it would make a good addition to your camping kit.

Solar panels convert sunlight to electricity. This is common knowledge. But these systems aren’t as black and white as you think. A solar panel rated at 28 watts will only produce 28 watts when it’s in full, direct sunlight. This means that it needs to be a nice day out, and you need to have the panel pointed at the correct angle. Many consumers purchase a solar charging panel and find that the results are seriously underwhelming. Until you’ve used it in many different situations, it’s hard to know if you are using it incorrectly, or if you have poor quality panels.

Most solar panels use Polycrystalline cells. This means that there are lots of tiny solar cells that make up one large panel. They are cheap, but not very effective. Goal Zero is one of the few vendors to use Monocrystalline panels. These are the best you can get, but come at a price. The advantage of mono panels is they perform better in low light conditions, and they are not as sensitive to angle as others. 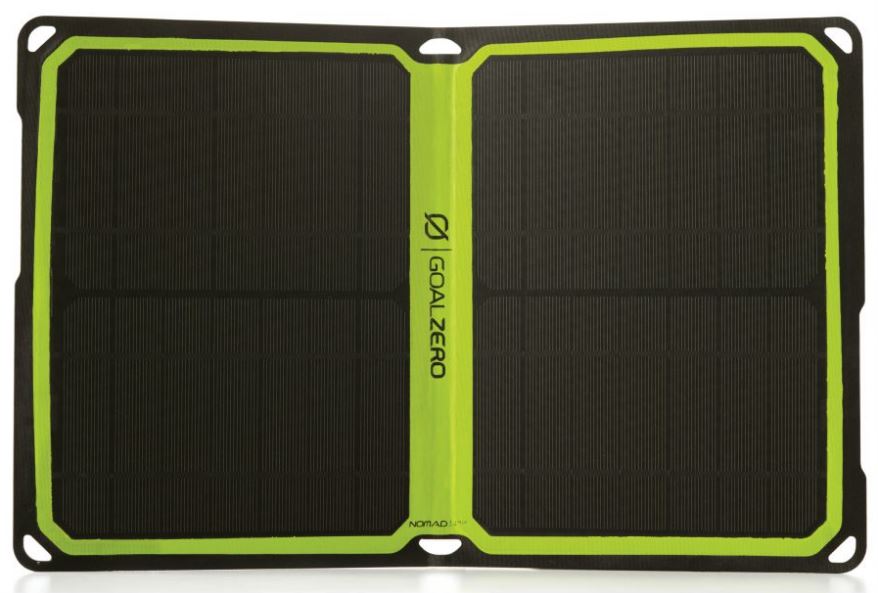 Generally, you have to fiddle with the panel to make sure it operates correctly. You’d adjust it to the angle you think is best, and move it again in a few hours. This is frustrating because you’re just guessing. What we love about the Nomad plus is the fact that they have a solar intensity indicator. This is located on the rear cable right next to the USB port. We first opened the panel in the morning, laying it flat on the table. We noticed that 3 out of 4 lights were illuminated on the indicator. Once we opened the kick stand and angled it towards the sun, the indicator showed us that 4 lights were on. As we approached mid-day, a second look at the indicator showed us that the panels were producing full power.

Generally, we only needed to adjust the panels a few times a day. Set it up in the morning, adjust it at mid-day, and again in the early afternoon. Thanks to the high-end panels and the indicator, adjustments only take a few seconds and you know that it’s been done correctly. Poly panels need to be adjusted four or more times a day, so this system is definitely much simpler.

To give some context for the power ratings, we tested our panels on a few different days. The Nomad 14 and 28 were able to produce their full rated power on a bright sunny day between the hours of 10am and 3pm. From 8:30am to 10am, and 3pm to 5pm, the power output dropped about 25%. On an overcast day, you’ll get about half the rated power. 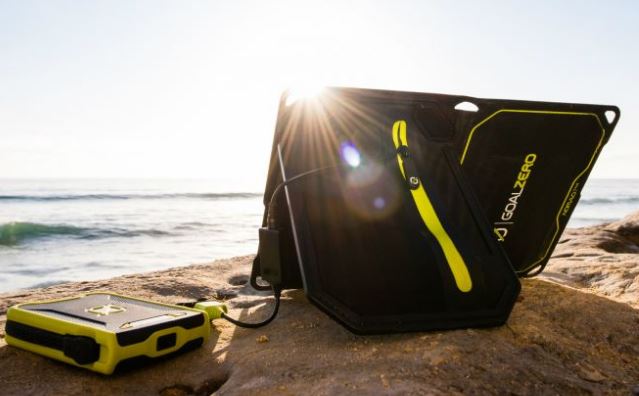 What can you do with that power? Well, the main reason somebody might want to buy this panel is to change their phones. Phones charge at 5V. Modern phones that use fast-chargers require 2.4A of current, while smaller phones and other USB hardware draws 1A. This means that you need 12 watts of power to fast-charge a phone, and 5 watts of power for a basic charge. Your phone will still charge if you’re not getting enough power, but it won’t charge any faster if you have extra.

What does this mean for you? On a beautiful sunny day, both the Nomad 14 and 28 will fast charge your phone at full speed. On a cloudy day, the 28 will still charge at full speed, while the 14 will be a little slower. Despite the Nomad 28 having twice as much power, it’s not really that much better than the 14 for charging a phone.

If you plan to use the panel to charge your Goal Zero battery, the situation is a little different. These batteries are designed to suck up every little bit of power that the panels will generate. This means that the Nomad 28 will always produce twice as much power as the smaller panel. 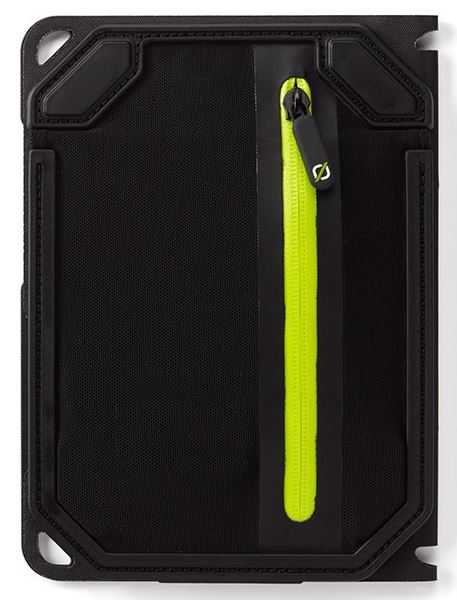 Plugging the panels in is a simple process. Inside the zippered pocket is a cable with an adapter. The cable can be plugged directly into any Goal Zero battery, as this is a direct connection to the solar panels. With the adapter in place, the panel output is converted to the proper USB signal, and the power LEDs are displayed.

Even though this adapter looks pretty basic, there is actually some pretty advanced hardware inside. It’s a fully blown charge controller. Instead of simply supplying power to your phone, it measures how your USB devices are responding, and adjusts the output accordingly. When a phone is fully charged, the power is reduced to a low voltage, preventing damage to the battery. We would never want to own a solar charger without this feature, although it’s surprisingly uncommon.

For anyone who needs a lot more power than a single panel can offer, you’re able to daisy chain them together. Officially, you can hook up five Nomad 28 panels or ten Nomad 14 panels. However, there is always power loss when travelling over a long distance. We’d recommend connecting a maximum of four panels together. Any more than that, and you’ll find that some of your power is being wasted.

Although this is one of the easiest and most reliable portable solar panels you can buy, it’s not designed to be universal. Goal Zero modified the connectors and tweaked the wiring so that you can only use it with Goal Zero branded battery. They’re a pretty high end brand, and consumers pay more for the name. It would be nice if the panel could be use with more affordable batteries, but for now we can only recommend this panel to people who either do not already own a solar battery system.

If you’re looking for a way to charge your USB devices while you’re away from a power source, we can’t recommend the Nomad Plus series panels enough. They’re extremely durable, easier to use than any panel we’ve tried before, and use on the highest quality components. If you only have a single phone to charge and plan to spend your time in the sunshine, the Goal Zero Nomad Plus 14 is the perfect choice.

The Noman 28 Plus is overkill for a single phone, but a must buy if you’re not willing to compromise on power. This panel is large enough to replenish quite a bit of charge on their battery systems, and will still work even on a cloudy day.

Need a battery? If you’re just looking to add a little capacity to your system, check out the Venture 70 Battery. This pocket-sized battery will give you a few extra charges, and works perfectly with these panels. For those of you who need a little more power, the Yeti 400 Lithium Battery holds enough power to run your whole camp site! No matter what you choose, Goal Zero gear is incredibly durable, and a must-have for the avid outdoorsman.