Whether you’re camping in the wilderness, or preparing yourself for a storm, a generator is handy to have. Electronics are becoming an essential part of our everyday lives, and we’re used to having virtually unlimited access to power at the nearest outlet.

Unfortunately, traditional generators aren’t always the best solution. Sure, a 5000 watt Honda generator can power up your entire home if there is a power outage. But they’re extremely heavy, loud, expensive, and emit toxic fumes when running. If you’ve got to run a fridge and a stove, these compromises are necessary. But for powering electronics, there is a better solution.

Goal Zero is a company that focuses on a different type of generator. Their solar generators rely on the suns renewable energy to produce power, rather than burning fossil fuels. At one point, their products were sold as all in one kits. But now that they’ve updated their battery bank to the latest technology, the Yeti 400 Lithium is a standalone battery that offers portable power on demand. There aren’t many batteries quite like it on the market, so we decided to try it out and see what it can do. 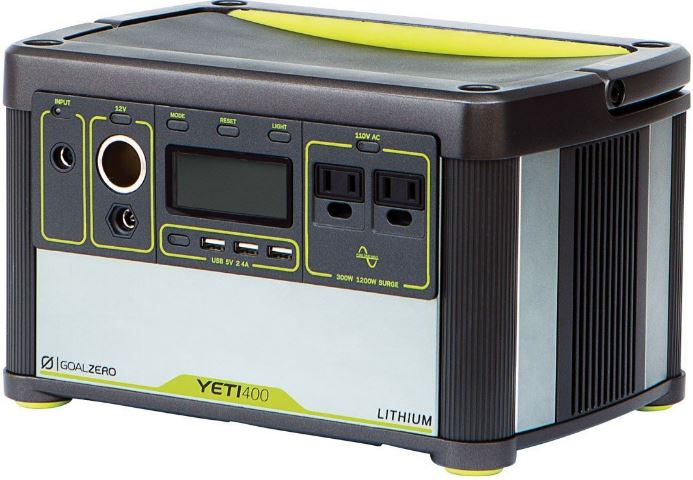 It’s easy to think of the Yeti 400 Lithium as a portable battery. In a way, that does describe the basic functionality. Charge it up. Carry it around. Plug things into it. With its built-in LCD display and diverse range of connectivity options, you might even consider it to be a little better than your standard battery. But once we started digging deep into the specifications and functionality, we realized that the design of the Yeti makes it unlike any other UPS-style battery on the market. For starters, it uses Lithium batteries. This is the same technology that made laptops and smartphones possible, but on a much larger scale. We’ll show you what sets lithium apart from standard sealed lead acid batteries, but first we’ll show you how the Yeti 400 Lithium works.

The Yeti 400 Lithium certainly has a modern appearance, but the real focus was utility. The gray and black enclosure is highlighted with bright yellow lines, providing a bit of contrast and pointing out the important parts. The handles, location of the different plugs, and button functions are all clear and easy to see.

But the Yeti isn’t just a cheap plastic case with some simple electronics thrown in. This is much more advanced than the lithium battery we’re used to seeing, and it’s far from light. At over 17 LBS, it takes a little work to lug it around. Fortunately, the large, curved metal handles make it easy to grip. All of the corners are strongly reinforced using a thick, ridged plastic that won’t crack if it’s accidentally dropped or knocked against something. For a source of backup power in your home, the strong build of the Yeti is overkill. But if you’re seeking outdoor adventure, you won’t have to worry about damaging it. 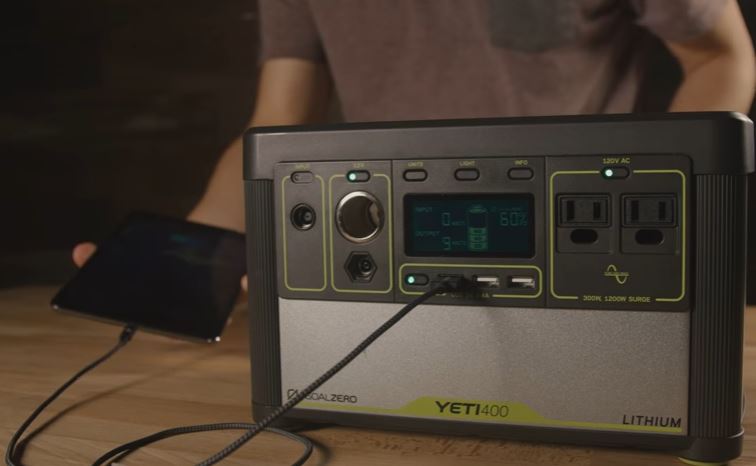 If it requires power, you can plug it into the Yeti 400 Lithium. You’re given two standard 120V outlets, three USB ports, and a pair of 12V connections for use in vehicles. The connectors on the far left are designed to help charge the Yeti. You can plug it into a wall to charge it quickly, plug it into the cigarette lighter in your car while on the go, or connect one of the optional solar panels to get free power directly from the sun.

But converting one form of power to another is not always an easy process. The internal battery runs on DC, but many consumers will be using AC. In order to convert DC power to AC, something called an inverter is used. Inverters are expensive, and this is where most manufacturers cut corners. Standard AC, like what you’d get from a wall, is a perfectly smooth analog sine wave.

Cheap inverters make a square wave, simply flipping the polarity of the signal 60 times a second. This might work for some devices, but many sensitive electronics cannot use this kind of power. This inverter uses a pure sine wave. The voltage difference between the two wires is digitally adjusted thousands of times per second. This allows phones, laptops, stereo systems, and almost any other electronic device to work perfectly.

Another nice touch with the Yeti 400 Lithium is the fact that all 4 USB ports run at 2.4A. With most modern cellphones now fast-charge compatible, this cuts your charge time almost in half. 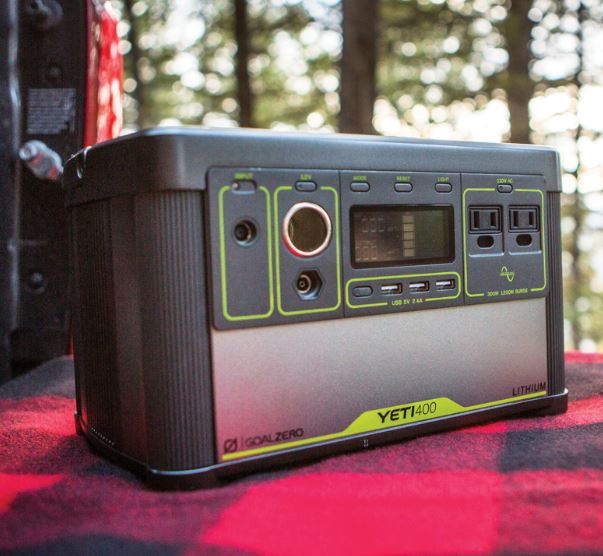 What can the Yeti run? And how long will it last? These are the two most important questions, but the answers are highly circumstantial. The total amount of power being used at any given time is measured in watts. The inverter in the Yeti 400 Lithium is rated for 300 watts. If you’re plugging in 120V electronics, you cannot use anything that requires more than 300 watts across both outlets. You could use a single 300 watt device, two 150 watt devices, or anything below. But even if you have the two AC ports running at full capacity, you can still use the USB charging ports, or the 12V socket at the same time.

Power consumption over time is measured in watt hours. If you were to use a 1 watt device for 10 hours, you’d have used 10 watt hours. The Yeti 400 Lithium has a total battery capacity of 428 watt hours. A phone charger uses 12 watts, so you could charge your phone for 35 hours in total. If you wanted to run something power hungry, like a 300W desktop computer, you’d only get about an hour and a half with it. Overall, the capacity is enough to last several days if you’re simply charging your laptop, phone, or other small electronic devices. Most of these things only need to be plugged in for an hour or two before reaching a full charge. 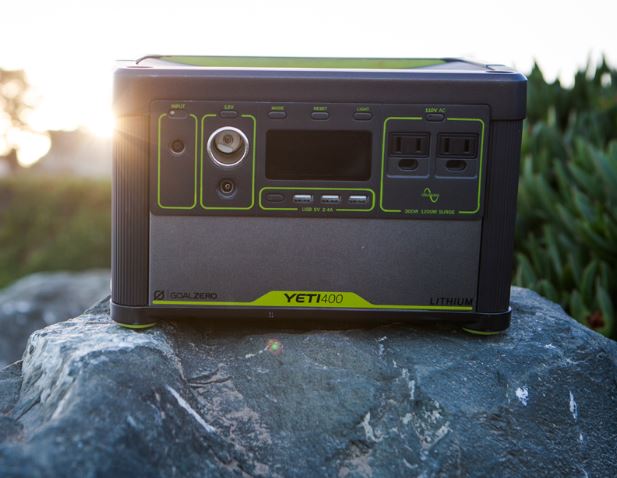 It’s also important to remember that many items don’t use quite as much power as they are rated for. Some stereo systems, for example, are rated for the maximum power they could ever produce. A 100W amplifier might only draw 3 or 4 watts at a moderate volume, or 40 watts if it’s too loud to talk over. Fortunately, the LCD display tells you exactly how much power is available, so you can keep tabs on it.

Need a recharge? By plugging the Yeti into the wall, you can completely recharge the battery in 7 hours. If you purchase the additional solar panels, you can charge the battery with those as well. The time it takes depends on the number of panels you have, and the intensity of the sunlight. With three 150W panels, you can charge it fully with 5 hours of bright sunlight. With a single panel, you’ll need closer to 15 hours. Remember, even during the summer solstice most areas only get 4 to 5 hours of peak sunlight. A safe estimate would be to assume that each 50W panel restores one quarter of the battery capacity each day.

The first benefit of the lithium batteries inside is longevity. Lithium batteries can handle 1200 cycles before the capacity is diminished. Even if you used it daily, it will continue to work for many years. Lithium also holds a charge for a long time. You can charge it up, store it in the basement, and still have a full charge six months down the road. Lead acid only lasts about 400 cycles, and will self-drain within 30 days. 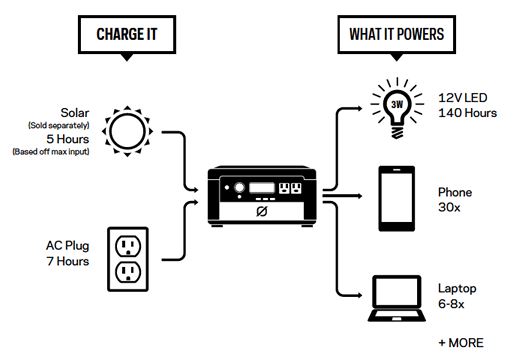 If you’re looking for something that you can take travelling with you, this might not be the best option. Many airlines do not allow high capacity lithium batteries to be transported on passenger planes. Hopefully these regulations will be loosened in the future, but for now lithium isn’t an option.

Additionally, there’s no inclusion of USB-C – the new charging standard for the next several years. This may not seem like a very big deal, but those who want the quickest possible charge times may require USB-C. 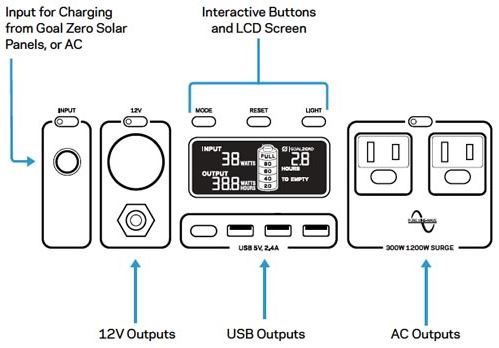 Lithium battery technology has many advantages over older battery backup systems, and the Goal Zero Yeti 400 Lithium is one of the best options on the market. While it’s a little more expensive than competing options, this is something that will last for many years to come. Even with heavy daily use, you’ll be able to replace depleted cells in a few years with drop-in replacements direct from Goal Zero. Combined with the fact that you only need a few cheap solar panels to turn this into a portable solar generator, this is a much more affordable option than full size generators if you’re just looking to charge electronics.

The Best RFID Blocking Sleeves for Passports and …
December 1, 2021