Tech companies are always looking to push the point of saturation. Whether you’re making microchips, cellphones, or any piece of tech, there comes a point where there just isn’t enough space to fit all the components you’d like to use.

How is it that there has been so much advancement in the personal audio industry? Ever since the 70s, speakers have been improving by dividing the sound across multiple drivers. One speaker cone handles the high notes, another the lows. At a concert, sound companies enlarge the sound by spreading it across an array of 20 or more speakers. But when it comes to ultra-compact earbuds, manufacturers have to find a single driver that can accurately recreate the entire spectrum of audible frequencies.

Companies like Bose, Sony, and Beats by Dre are big names in the audio space. Every year, they manage to find a few small tweaks that improve their existing designs. Once in a while, it takes a company with a whole different line of expertise to find a unique solution to an old problem.

Rosewill is a company known before for their computer hardware. Time and time again, they’ve demonstrated that they can pack powerful hardware into a tight space. Their EX-500 and EX-700 earbuds look pretty similar to others on the market, but underneath their polished exterior is a unique driver system that could change how we see the common earbud. But before we could say that conclusively, we had to try them out for ourselves. 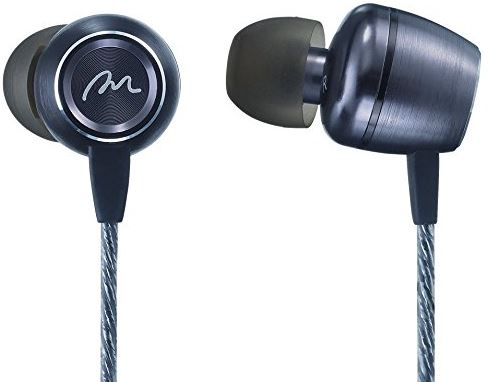 Both the EX-500 and EX-700 ship in similarly designed blue aluminum enclosures. While there are some small stylistic changes between them, it’s pretty obvious that they are cut from the same cloth. What is it that separates these earbuds from others on the market? Despite their compact size, they have two distinct drivers inside. Being as it’s so challenging to accurate recreate both treble and bass from a single driver, we were curious to see what they sounded like. 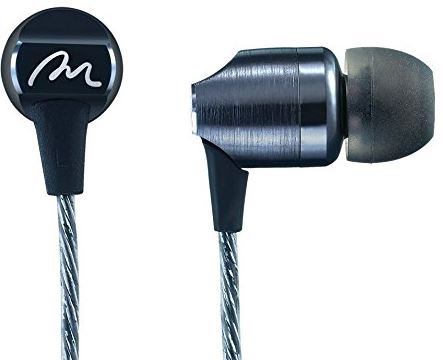 Earbud style headphones never seem to stand out that much. They’re so small and compact, that manufacturers often overlook how important appearance is. Bust just as a pair of earrings can influence someone’s entire appearance, subtle changes to the way a pair of earbuds look can make a big difference in their appearance. And this pair doesn’t disappoint. The brushed aluminum enclosure has a very premium feel to it. But there are subtle design choices that really bring them to live.

The mirror surface edge of the bud draws attention to Rosewill’s new signature-styled logo. Because the rubber inserts are offset at an angle, the earbuds sit flat in your ear giving them an orderly look.

To those who pass by, it’s the braided cord that will stand out the most. With a shiny foil overlay, the cable has a luxurious feel that you don’t often find on mid-range headphones.
The only external difference between the EX-500 and the EX-700 is the driver size and shape of the earbud. The EX-700 is a little larger, with the rear of it beveled off across a smooth gradient. 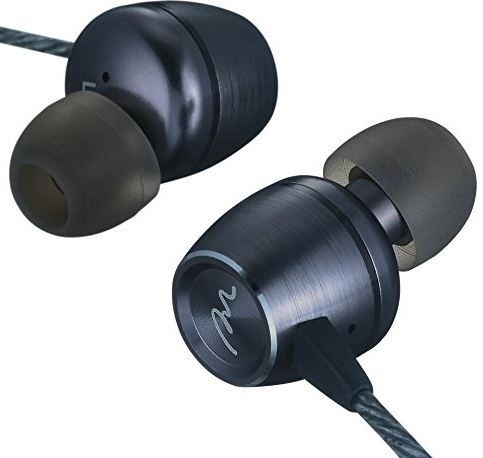 As we mentioned, dual driver audio systems are nothing new. But the way they are implemented in these earbuds is much different than the way they’re used in speakers. When earbuds are this compact, it’s not easy to fit a lot of hardware inside. This is especially challenging because you can’t combine any random tweeter with any random woofer. The two speakers need to be acoustically similar, tuned in a way that they complement each other like guitar strings.

Rosewill found a creative driver design that would minimize the importance of this. Typical drivers are made from a magnet and a coil attached to the back of a cone. The magnet forces the coil to move, vibrating the cone. For space purposes, earbud drivers aren’t cone shaped like speakers, they’re often flat. Instead of a single coil coming off the back of the driver, Rosewill attached a balanced armature, essentially two little arms coming off the back of the specially shaped cone. The main driver attaches to the main arm, providing most of the acoustic vibration. Meanwhile, the second arm connects to a magnet that is capable of very precise, controlled movements. This modifies the deep, boomy vibration from the main driver, creating the micro-movements necessary for clear treble. 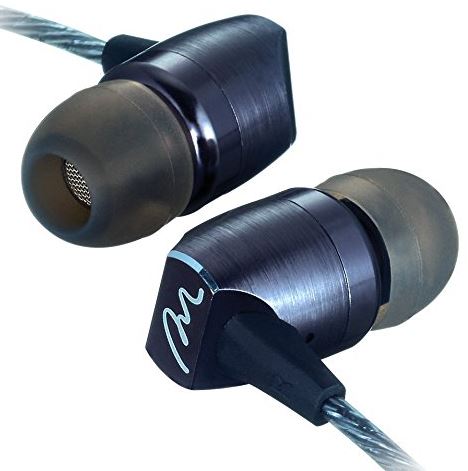 There are two different versions of this technology in each set of Rosewills headphones. The EX-700 has a single 8mm diaphragm connected to both drivers, creating a perfectly balanced sound. The EX-500 uses a ceramic drivers whereas the EX-700 doesn’t. The 10mm diaphragm produces all the bass, with a tiny ceramic attachment filling in the highs.

All headphones behave differently. Large, over the ear headphones have massive drivers that require a lot of power to move. These high impedance headphones often need special amplifiers to drive them, but the EX series earbuds are quite the opposite. They are extremely sensitive, turning the tiniest electrical fluctuations into audible sound. To reduce resistance, Rosewill made sure to gold-plate the 3.5mm adapter. This improves current flow from your audio source, reducing distortion. 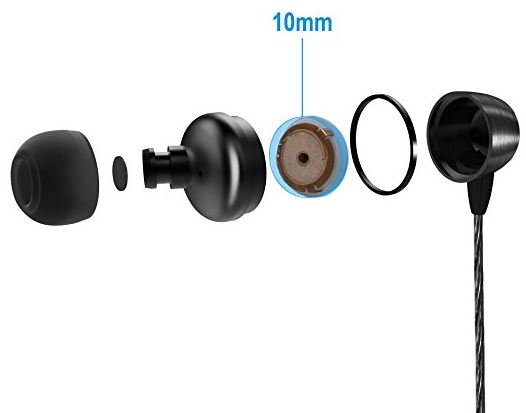 We know how it works, but how does it sound? In short, the dual driver system makes a huge difference. Music sounded a little more defined, crisp, and engaging. There is no dropout of the highs every time the bass drum kicks, and sound remains clearly defined even at high volumes. 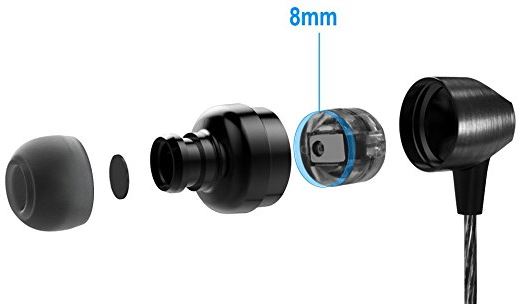 Both pairs of earbuds have a healthy portion of bass, making them ideal for anyone who listens to music with a bit of kick to it. But there are a few differences between the EX-500 and the EX-700. The 500s felt like they had a little more power behind them, with an aggressive, in your face sound signature. The 700s were a little more reserved and detailed. We felt as if there was better cohesion between separate musical elements, making for a smoother audible experience.

Overall, we liked hip-hop and electronic music best on the 500s. The 700s would be ideal for anyone who has a more involved listening process, or who takes pleasure in the subtle nuances of a song. 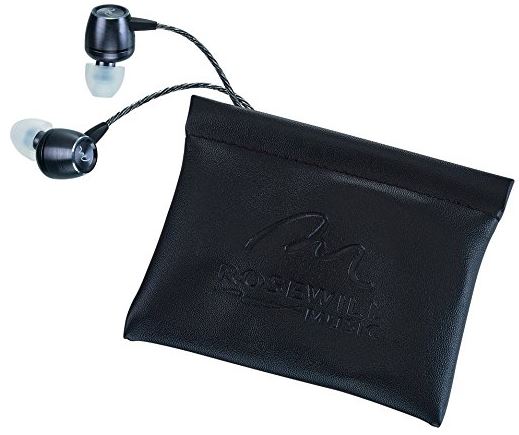 Just from holding them in your hand, it’s clear that these earbuds are made to a very high standard. While the bud enclosure is made from a two-part system, it’s bonded mechanically and chemically with a long-life adhesive. But this isn’t the only feature that can help your headphones last for a long time. The smooth finish on the cable reduces tangling, keeping your cord pristine.

In line with the cord is a small handheld remote. This allows you to change the volume with the rocker switch on the front, or answer calls with the button on the rear. There is a built-in microphone, allowing hands-free calling without removing your phone from your pocket. This is a common feature is modern earbuds, and one we wouldn’t want to go without.

After enjoying the convenience of Bluetooth headphones for quite some time, it was a little odd to go back to the classic wired style. While this does safe a little money, we’d be happy to pay extra for a wireless version of these earbuds. 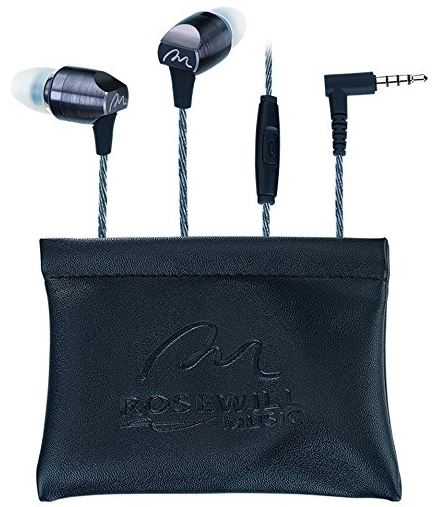 With so many established manufacturers competing neck and neck for the mid-range headphone marketplace, any new challengers need to make a pretty big statement. With the release of the EX series earbuds, Rosewill has clearly shown other vendors that they need to step up their game.

But which set is right for you? Bass heads will be satisfied with the EX-500. You definitely get a little extra oomph out of them, and save a few dollars while you’re at it. But if you’re looking for a more analytical audio experience, the EX-700 has a noticeable boost in resolution and clarity. It’s somehow able to enhance specific details while keeping the song together has a whole, something that we’ve experienced with many high-end audio devices.

Our only real gripe with them is that they aren’t wireless. If you’d prefer to use Bluetooth, you might want to add on a Jack by Podo Labs. This affordable little adapter can convert any standard 3.5mm pair of headphones to Bluetooth, so it’s handy to have around.