The Gamdias Hephaestus P1 is a pretty good example of all the different kinds of gaming-oriented features you can find on a headset. For the most part, it’s safe to assume that gamers are going to be using their headsets for extended periods of time. That means long-term comfort is a priority. Gamers are also going to want accurate surround sound features, to better help them identify targets within a soundscape. And for anyone involved in competitive gaming, microphone quality is going to be a concern. Whether you’re playing in a noisy LAN environment or you’re just looking for clear communication, call quality matters. 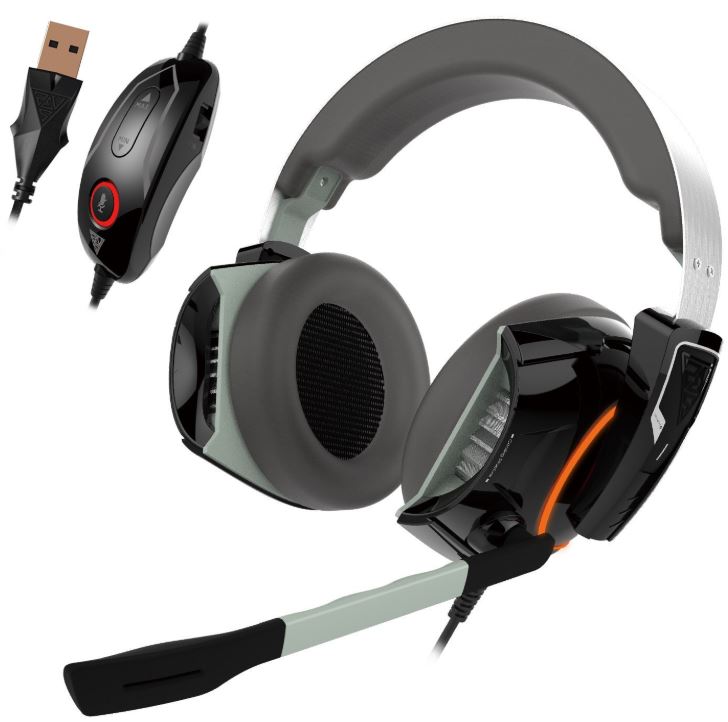 And those are just a handful of ways in which the Hephaestus P1 manages to deliver on features uniquely useful for gamers. But one of the more compelling features is actually onboard vibration, naturally triggered by low-frequency sounds like explosions. The vibration causes pulses around your ears, and can be triggered independently on each ear cup. Consequently, you can use those vibrations to help you better identify the directionality of sound. If you’re playing the right style of games, you’ll also find the vibration can be quite immersive, which is the reason that feature is so widely used on gaming console controllers.

Moreover, that vibration allows you to have an exceptionally strong advantage when you’re playing games with poor surround sound support. When other players are scarcely able to hear a difference between their left and right, the Hephaestus P1’s vibration feature can be a significant tactical edge. In some circumstances, being able to take advantage of the directionality of sound is like having a sense that other players don’t have. 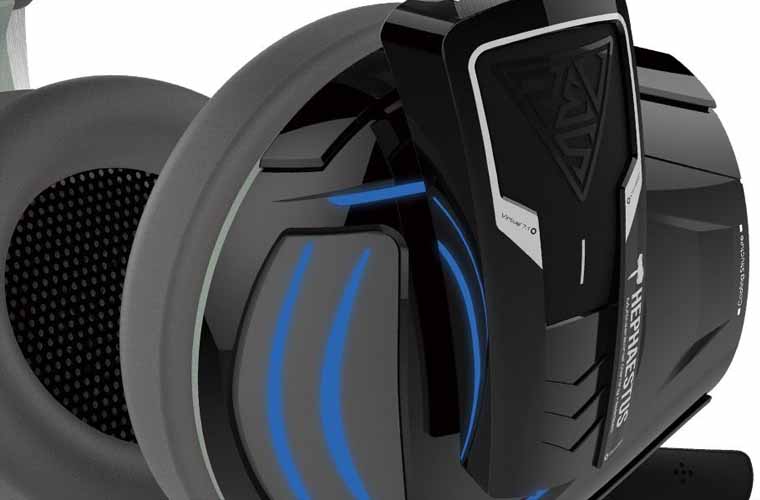 Every headset needs some measure of comfort. But gaming headsets need more than those built for casual listening. Gamers need their headsets to be equally comfortable their first moment of wear as they are after six-hours of use. And GAMDIAS can deliver that, in large part due to the P1’s particularly large over-ear design. That large design allows GAMDIAS to use an ample amount of padding, ensuring the weight and pressure of the P1 is well-distributed over the surface of your head.

When you’re wearing well-padded headphones for an extended period of time, heat can quickly become an issue. In the absence of a thermally sound design, direct contact between your skin and the padding on the ear-cups can quickly lead to sweating. But the P1 was equipped with built-in aluminum heatsinks, which allow heat to be drawn away from your headphones. That heatsink design isn’t all that different from the heatsinks used inside gaming computers, the key difference being there isn’t a tiny fan to help distribute air over the heatsinks on the P1.

Aesthetically, aluminum construction makes it easy to have confidence in the quality of the build. But there is one downside to such sturdy parts, and that’s weight. The Hephaestus P1 weighs a little more than one full pound. That’s roughly twice as heavy as an ordinary pair of over-ear headphones, which means the P1 can feel weighty on your head. They’re certainly not the type of headphones you want to take with you on a jog. 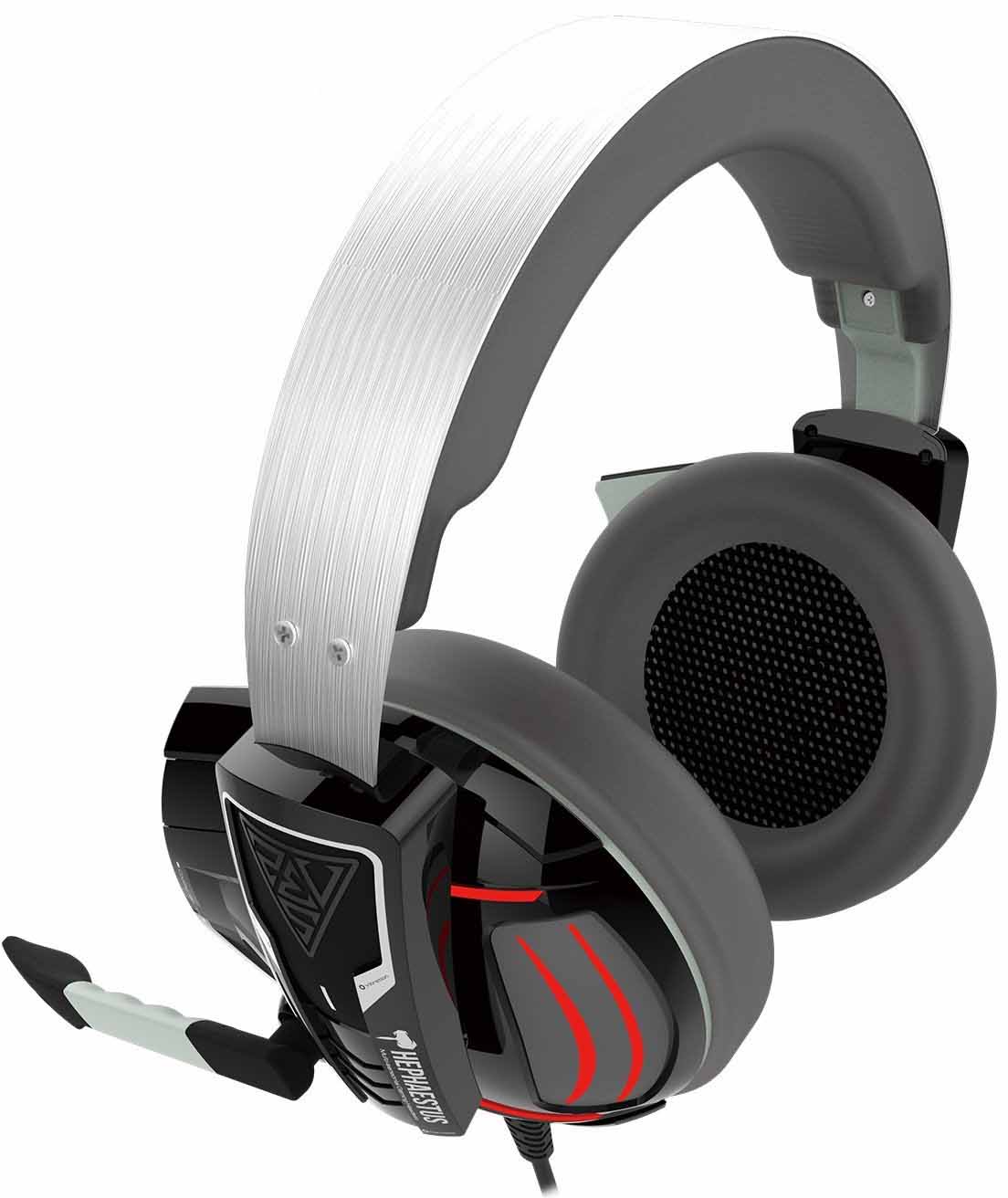 The design of the P1 makes use of exceptionally large 50mm drivers in each ear-cup. That’s nearly 20% larger than what you find on most full-sized headphones. Those larger drivers help contribute to greater volume capabilities, sound clarity, and a more immersive 3D soundscape. For gaming, that translates into more accuracy in sound, giving you a better idea of the position of objects around you in a game. That means you may end up with a competitive advantage even relative to other players who have surround sound headphones.

Two more things to notice about the build are the USB connection, and the length of the cable. Many headphones are phasing out standard 3.5mm aux connections in favor of USB, and the P1 is no exception. For both PC and console gamers, that should be no inconvenience. As far as the cable goes, its a lengthy 1.8-meter design, which is nearly six feet. Cables that long can be a little unwieldy, but are particularly great when you’re not expecting a headset to be very mobile to begin with. 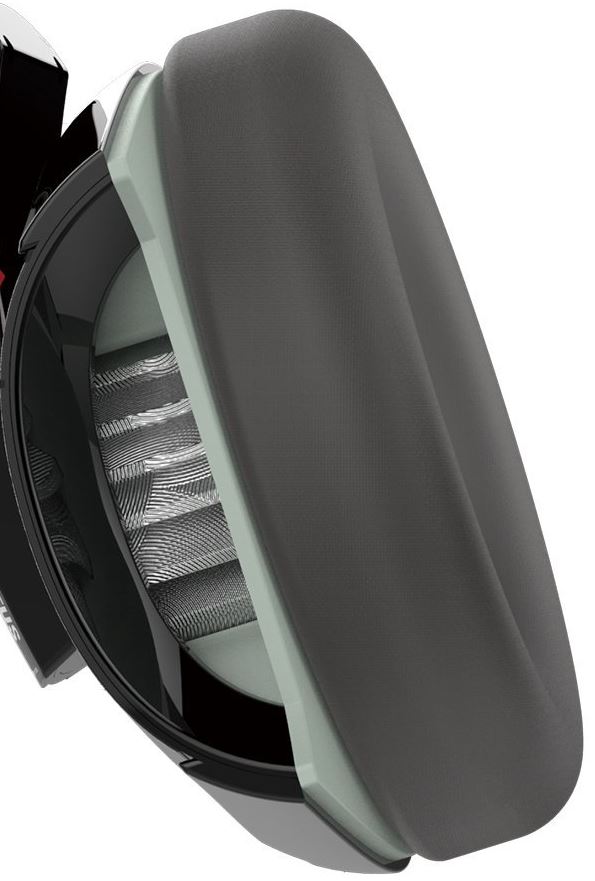 Gaming gear typically comes with a gaming aesthetic, and the P1 is no exception. Along each ear cup, you’ll find RGB lighting. But what makes the P1 exceptional is your ability to switch those LEDs to whatever color you want, making their full aesthetic customizable. If the rest of your PC gear is red, it’s quite easy to match the exact same shade of red.

There are three things to note about the sound quality of Gamdias Hephaestus P1. The first is noise isolation. For playing in louder environments, noise isolation is essential to keep out distractions. That makes it great for attending a LAN, or living with rambunctious children. Thankfully, the over-ear design of the P1 helps provide a reasonably strong degree of noise isolation.

The next thing you’ll want to notice is the virtual 7.1 surround sound. Of course, real surround sound is only possible by having several speakers positioned around you, which can’t be fully achieved with two speakers placed directly on your head. But sticking those drivers right next to your ears does provide a number of advantages, which is how the P1 delivers on providing an accurate 3D soundscape. That sound can also be adjusted to match your preferences through the HERA software.

The third thing to notice about the sound quality of the P1 is its impedance. Impedance is basically the resistance to which some material restricts the flow of AC. In other words, headphones with lower impedance are efficient at concerting electrical signals to sound. For the same amount of power, you get better quality and more volume. But headphones that require higher impendence capable of creating more detailed sound than those that use less power. 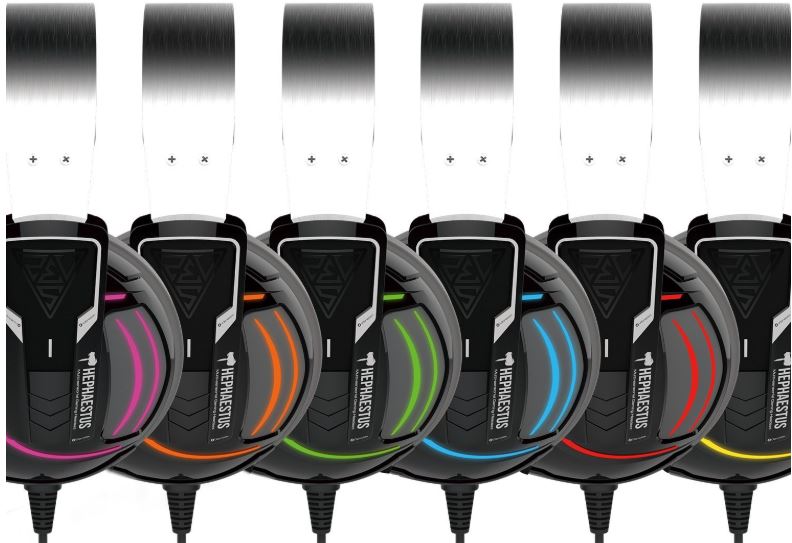 The design of the P1 places it at 32-ohm impedance, and that’s a tricky position to be in. Many laptops, smartphones, and similar devices aren’t equipped to handle 32-ohms. For example, the output of MacBook is about 24 Ohm. PC gamers will find that unless they’ve got a top-shelf motherboard or a dedicated sound card, even most desktop computers aren’t going to be able to fully support the P1.

When you run 32-ohm headphones on computers that aren’t equipped for the task, those headphones won’t reach their full potential in sound quality. But here’s the tricky part – 32 ohms isn’t actually that high. The kind of gains or losses in sound quality we’re talking about aren’t a night and day difference, and certainly not enough to warrant investing in a soundcard if you don’t already have one.

When you’re using them without appropriate impedance support, the Hephaestus P1 will sound slightly above average for headphones in this price range. But if you’re fortunate enough to have equipment that can support 32-ohms, they sound substantially better than any of their competitors, providing what feels like close to high-resolution sound. And they’re capable of reaching large volume levels without drastically increasing distortion in the process. 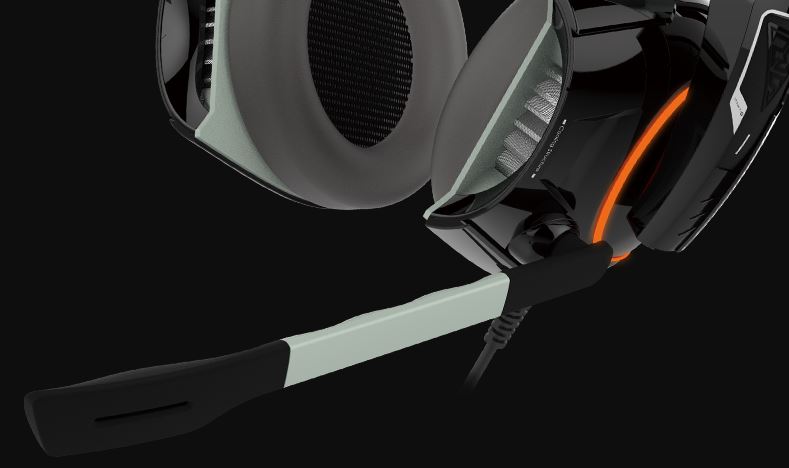 The microphone pickup on the P1 is unidirectional rather than omnidirectional. A unidirectional mic receives sound from all directions, so positioning is extremely important to properly capturing sound. Thankfully, the P1’s design has the mic extended out from a flexible arm built on a swiveling base. That allows you to find the right position for the mic rather easily. Beyond that, it’s worth noting that the P1 makes use of digital noise cancelling. That means your mic is about as protected from external noise as your ears are.

It’s increasingly common to see controls implemented directly onto the bodies of headsets, but the P1 doesn’t need any more weight than it already has. Instead those controls are managed through an included smart remote controller. The remote allows you to toggle settings for the vibration, the mic, and the volume of the headset. Whether or not that controller ends up being useful largely depends on if you’re currently making use of keyboard shortcuts for media controls. 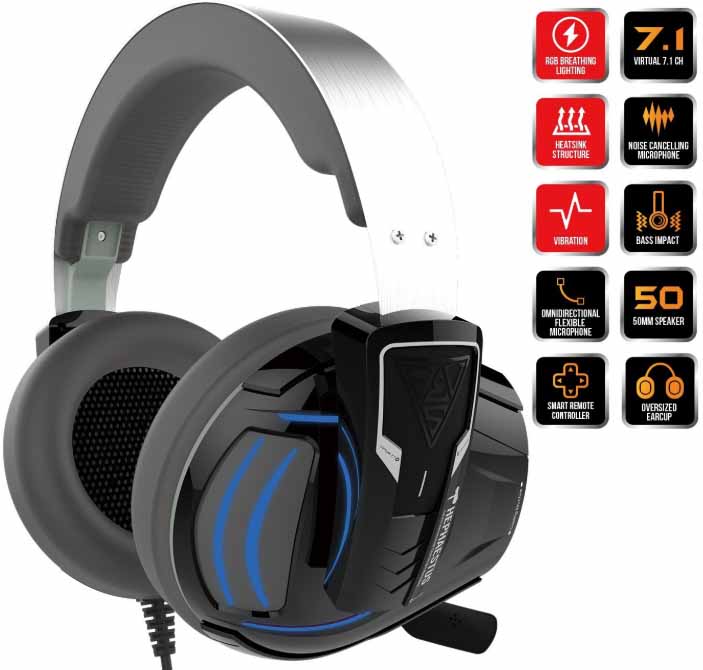 Who Should Choose the Gamdias Hephaestus P1?

Within this price range, headphones are typically made to trade sound quality in exchange for better features. The Gamdias Hephaestus P1 manages to maintain an excellent level of sound quality while having numerous interesting features. Its microphone offers clear and crisp audio that’s nicer than anything you’ll need for the limits of common VOIP services. And for listening to music, the P1 isn’t bad either.

If you’re not going to use the mic, and you don’t need noise isolation, you can probably find a headset with more to offer you. And if you plan on playing literally all day long, after 8 or 10 hours, some people may find the weight of the P1 wearing on them. But for a headset that needs to hold up to noisy environments, and a headset with a strong positional mic, the P1 delivers on what it promises.

Exactly how much of an edge the P1 offers depends on a number of factors. In most FPS matches, battles are won or lost depending on who had initiative. And to that end, the Hephaestus P1 can be strong at helping you identify where things are happening within a 3D space, which translates into you getting the drop on your opponent. But for more causal titles, you might find those types of advantages thinner.

All in all, the P1 is a good choice for people who play competitive or social games. The directionality of the sound can make for a competitive edge; and the high quality mic delivers on call clarity. The P1 is also excellent for those who play smaller budget indie games because the vibration feature may allow you to get an advantage over players relying on a game’s in-built surround sound.