The Game Boy Advance family of handheld consoles was one of the most successful of all time. In its lifetime, the GBA and related systems sold over 81 million units. As a matter of fact, it’s the tenth best-selling game console of all time. Not the tenth-best handheld console. That number includes full-sized bestsellers like the PlayStation 2 and Nintendo Wii. And the two handheld consoles that rank higher are both Nintendo systems: the original Game Boy and the Nintendo DS. Suffice it to say that Nintendo seems to have the handheld gaming market cornered.

These older handheld consoles aren’t just doorstops. For many people, they’re still daily drivers, or at least something you pull out once a month. After all, there are plenty of titles you still can’t play anywhere else. Maybe you want to relive The Legend of Zelda: A Link to the Past or Final Fantasy Tactics Advance. Maybe you want to play some one of the oodles of Pokemon titles that are only available on the Advance. But some parts are inevitably going to wear down over time. The most obvious is the battery. In fact, if you’re using a Game Boy Advance, there’s a good chance it already has a replacement battery inside.

Fortunately, finding a replacement Game Boy Advance battery is easy. Thanks to the Advance’s high sales numbers, there’s still a healthy aftermarket for parts. We’re about to review three of the best Game Boy Advance SP batteries available on today’s market. We’ll begin by looking at the Sumoto Game Boy Advance SP Replacement Battery Pack. This is a straightforward replacement for the original battery, along with a screwdriver. We’ll also examine the OSTENT Rechargeable Lithium-ion Battery + Tool Pack Kit and the HANTOLK Rechargeable Li-ion Battery Pack. These are more powerful batteries that also include their own screwdrivers. Which one is the best? Let’s dig a little deeper, and find out.

The original Nintendo Game Boy was created in 1989. It utilized an 8-bit Z80 processor, and worked only in black and white. Other than that limitation, the technology was roughly equivalent to the NES. As a result, there were a wide variety of titles that were similar to original NES titles. For example, Super Mario Land’s gameplay is identical to Super Mario Bros 3 for the NES. In 1998, Nintendo released the Game Boy Color. This variant had twice the processor speed, and supported full color, similar to the NES. 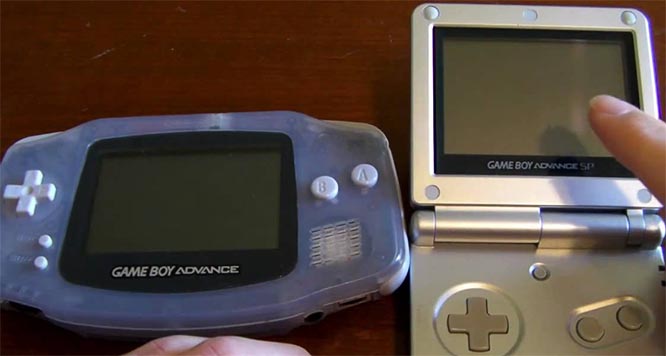 But even when it was released, the Game Boy Color was already close to becoming obsolete. To be fair, handheld gaming always lags behind console gaming in terms of graphics. But for all the fanfare, the Game Boy Color was equivalent to a console from the early 80s. Even so, it sold well, and remained Nintendo’s flagship handheld console into the PlayStation 2 era, if only slightly.

On March 21st, 2001, just 17 days after the launch of the PlayStation 2, Nintendo released the Game Boy Advance. It sported a faster processor, and 32-bit graphics and a processor similar to the Super Nintendo. Shoulder buttons had been added to accommodate the increasingly complex control schemes of newer games. The Game Boy Advance was highly successful, and saw a number of popular titles. It’s the console that gave us The Legend of Zelda: A Link to the Past, and Mario Kart: Super Circuit. Importantly, it was also backwards-compatible with earlier Game Boy and Game Boy Color games.

So, how do you actually use your replacement battery? You’ll be relieved to find out that replacing the Game Boy Advance SP battery is relatively easy. It’s not like changing out other components, like the screen or the speaker. Unlike those parts, the battery is designed to be easy to access for the average person. To begin with, remove any game cartridges, and unplug the power adapter. You don’t want to accidentally cause a short circuit and damage your game or your system.

Turn the system over, and you’ll notice a removable panel on the bottom, secured by a screw. This is a very small Philips #00 screw, and requires an undersized screwdriver to open it. The batteries we’re looking at today all come with compatible screwdrivers. However, if you’re using a different battery, you might need to buy your own. The screw will not actually come all the way out. It’s designed to remain partially retained in the hole on the battery cover, which makes it impossible to lose. Just lift the cover, screw and all, and set it aside.

When you remove the old battery, inspect it first to see if it’s swelling or leaking anything. If it is, you should remove it with a plastic tool to avoid getting anything on your fingers. Use caution with a swelling battery in particular, since it could be a fire hazard. With the old battery removed, insert your new one in the same orientation. The Game Boy Advance SP battery compartment has a set of recesses, which correspond to tabs on the battery. As a result, it’s virtually impossible to insert the battery in the wrong direction. Screw the cover back down, and you’re almost done. 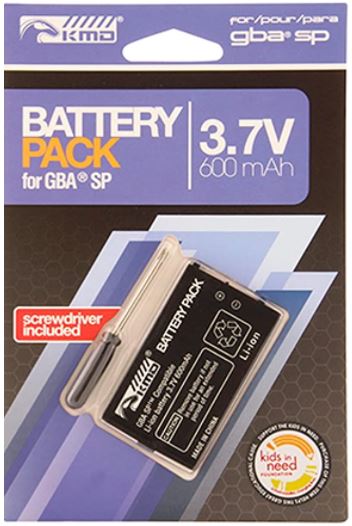 The Sumoto Game Boy Advance SP Replacement Battery Pack is nearly identical to the original. It’s black, it’s rectangular, and there are a pair of tabs at one end to hold it in place. On the back, there’s a bunch of text with your standard warnings and recycling information. It’s not pretty, but it doesn’t have to be. Nobody’s ever going to see it. It’s a purely functional battery that does what you need it to do.

All of today’s options have the same form factor. That’s essential for the battery to function. But the Sumoto battery also has the same amount of power, 3.7 volts at 600mAh. That’s identical to what you got from the original Nintendo Game Boy Advance SP battery. The kit also includes a Philips #00 screwdriver to allow you to open the battery compartment. It’s just a small driver with a black plastic handle, but it gets the job done. 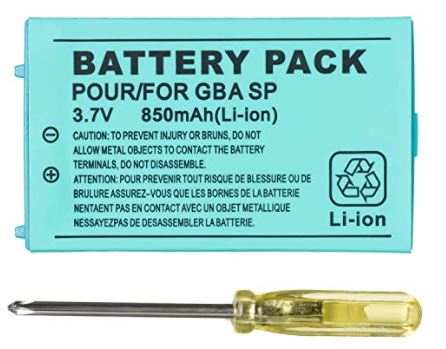 The OSTENT Rechargeable Lithium-ion Battery + Tool Pack Kit is another rectangular battery. Like the Sumoto, it has a set of tabs to keep it in place. But rather than black, it has a teal shell, which suits Nintendo’s playful aesthetic. On the back, you’ll see all the usual safety and recycling text. This is pretty standard stuff, and not worth looking at further.

What sets the OSTENT battery pack apart is its power. Instead of the 600mAh capacity of the original, it’s been upgraded to 850mAh. This is an increase of more than 40 percent. In terms of gameplay, the original battery will get you about 10 hours, depending on what you’re doing. So the OSTENT battery’s 40 percent increase equates to around four extra hours of playtime. That’s a significant improvement that shouldn’t be ignored. Like the Sumoto battery, it also comes with a screwdriver. It’s a bit longer, with a transparent yellow handle. But there’s nothing else that makes it stand out. It’s just a basic courtesy tool so you can actually use the battery. 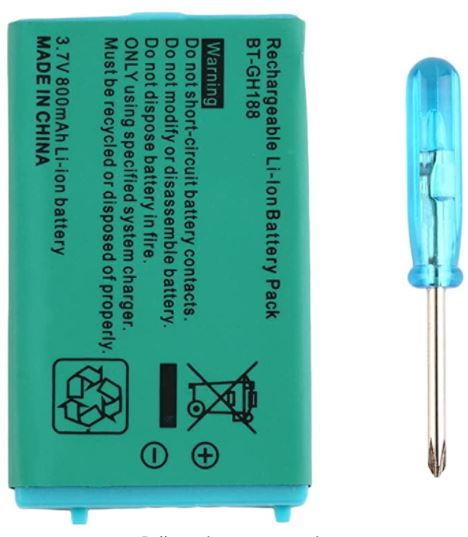 The HANTOLK Rechargeable Li-ion Battery Pack is similar to the previous two. It’s rectangular, and there are a pair of positioning tabs. The only major difference in terms of appearance is the color. It’s a dark green, with informational text similar to the last two batteries we looked at. Like the OSTENT, the actual capacity is higher than the original. It packs an impressive 850mAh of power, the same 40 percent upgrade we just discussed. So you’re also getting four extra hours of playtime per charge, give or take.

Along with the battery, the kit also includes a short, Philips #00 screwdriver. It’s stubby, with a transparent blue handle that’s easy to grip. Like the last two drivers, it’s not exactly the pinnacle of engineering. But it’s good enough to change your Game Boy Advance battery without any trouble.

So, where does this leave us? Let’s start with the Sumoto Game Boy Advance SP Replacement Battery Pack. It’s a fine replacement battery, and it does its job without creating any issues. That said, it’s just not as powerful as the other two. With pricing being more or less equal, we can’t see any reason to use a less powerful battery.

The OSTENT Rechargeable Lithium-ion Battery + Tool Pack Kit and HANTOLK Rechargeable Li-ion Battery Pack provide identical power. Either way, you’re getting an 850mAh battery that’s more than a third more powerful than the original. The result is more gaming with less downtime for charging. The only significant difference between the two is the screwdriver. The OSTENT’s is slightly longer, while the HANTOLK is slightly shorter. Choose the style you prefer, but both batteries are well worth your money.