The GameSir G6 was designed specifically for mobile games, and specifically for the iPhone. The general idea seems to be allowing players to enjoy both the advantages of a touchscreen, and the advantages of having an actual analogue controller in your hand, without making any real sacrifices in the process. Though technically, you do make your phone a little bigger and less portable by attaching the controller. 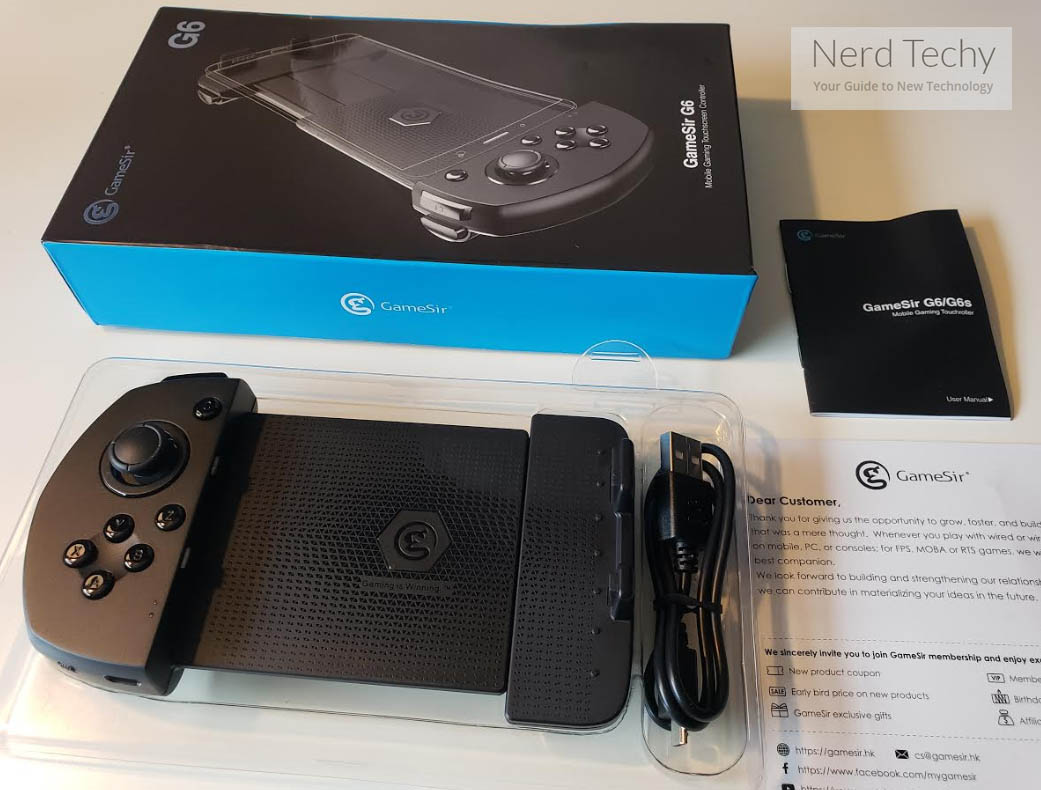 But if you’re willing to make that sacrifice, there’s little question that having a controller like the G6 gives you more refined control over your actions. Not only the placement of your actions, but the timeliness of those actions. It’s an almost general and universal advantage that virtually anyone can access, provided that they’re going to start using a controller.

Without native support for the iPhone, controllers are prone to being mistaken as some kind of cheat, from the perspective of the game. Unfortunately, that leads many players who use incompatible equipment to end up being banned from some of the games they play. That’s partially because having hardware advantages over other players can really make or break a game. But how does the G6 manage this? 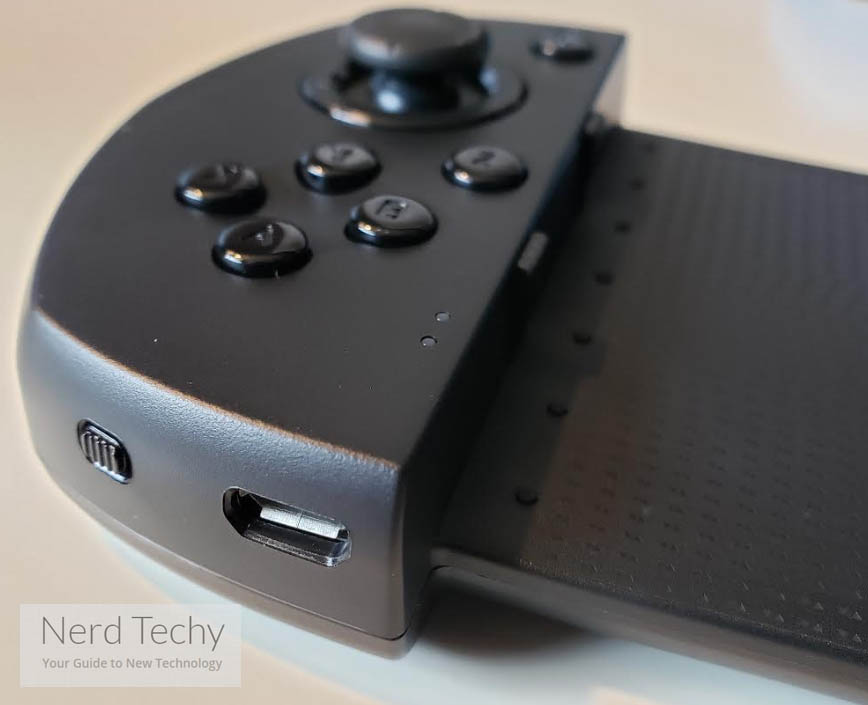 The G6 was designed rather specifically with FPS titles and MOBA titles in mind. Sure, you could use this controller to play your point-and-click farming games. But it would be just a little redundant in those kinds of games, which are already well played using nothing more than the touchscreen interface. No – it’s FPS and MOBA titles that really allow the G6 to shine.

Because those are the kind of games where having analogue controls are a really big advantage. They allow you a greater degree of precision than someone feebly tapping away at their screen can ever achieve. They also keep your hands off your display as much as possible, so you can actually see what’s going on around you. Clearly, that’s hugely advantageous in any number of games where you need situational awareness. 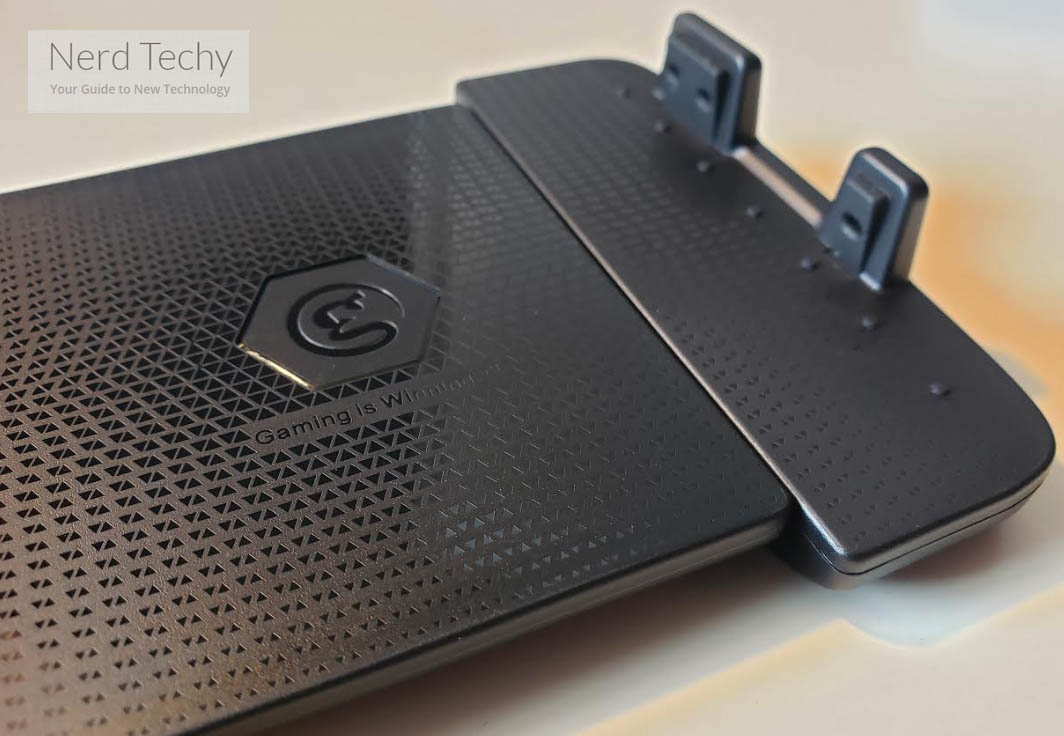 Fully extended, this controller measures 6.8 x 4.29 x 1.69 inches, and it weighs around nine ounces. That does add a little bit of heft to your smartphone when holding the controller, but that’s also for the best. GameSir has done a great job of balancing the weight of this controller. And the included charging cable length runs 1.6ft.

The G6’s joystick is fairly short. Being short comes with advantages and disadvantages. It’s quite good for close quarters aiming, or steering your character around from place to place. It’s not as good when it comes to aiming over great distances, like with sniper weapons. When you’re aiming long distances, you’re actually better off with a longer joystick. It would be nice if this joystick was swappable, but alas, it’s permanently fixed into position.

The ABXY buttons aren’t something that need too much special attention. Each button is designed with a smart mechanical switch that firmly pops back into place after actuation. The controller is primarily held in your left hand, but it actually attaches to both the left side and right side of your display.

On the backside of the controller, you’ll find pairs of trigger buttons. Each is marked L1, L2, and so forth. I’m not sure why they felt the need to label the left triggers as being on the left side. Even if you forgot which side was left, I don’t think the labels would help you out at that point. Just about the only instance that might be useful is if a small child was trying to setup the G6 on a smartphone. 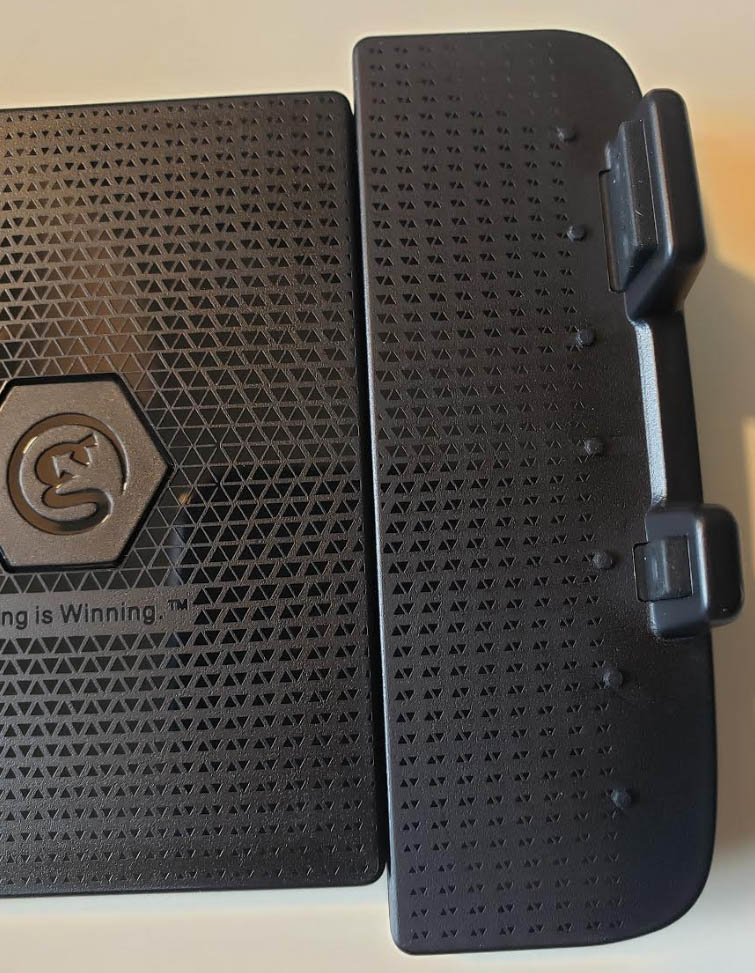 In any case, the buttons are closely positioned to the bottom-side of the controller. Because there is no handle extending below these controls, like a real game controller, you’re forced to grip the screen in such a way that makes accessing the ABXY buttons a little awkward. At least, depending on the size of your hands. If you have average sized hands or smaller hands, then you probably won’t encounter any issues with the button placement. But for people with larger hands, it may be necessary to figure out how to hold the screen in an atypical way.

There’s actually something called G-touch technology that makes these buttons more suitable for FPS games specifically. This G-touch technology basically means that the entire controller is technically touching the screen in order to control your character in a game. Even though you are not physically touching the screen, when you press a button, that button basically works by making the screen think that you’ve pressed in a particular place. And that’s how you avoid getting banned in games that don’t allow for this kind of thing. 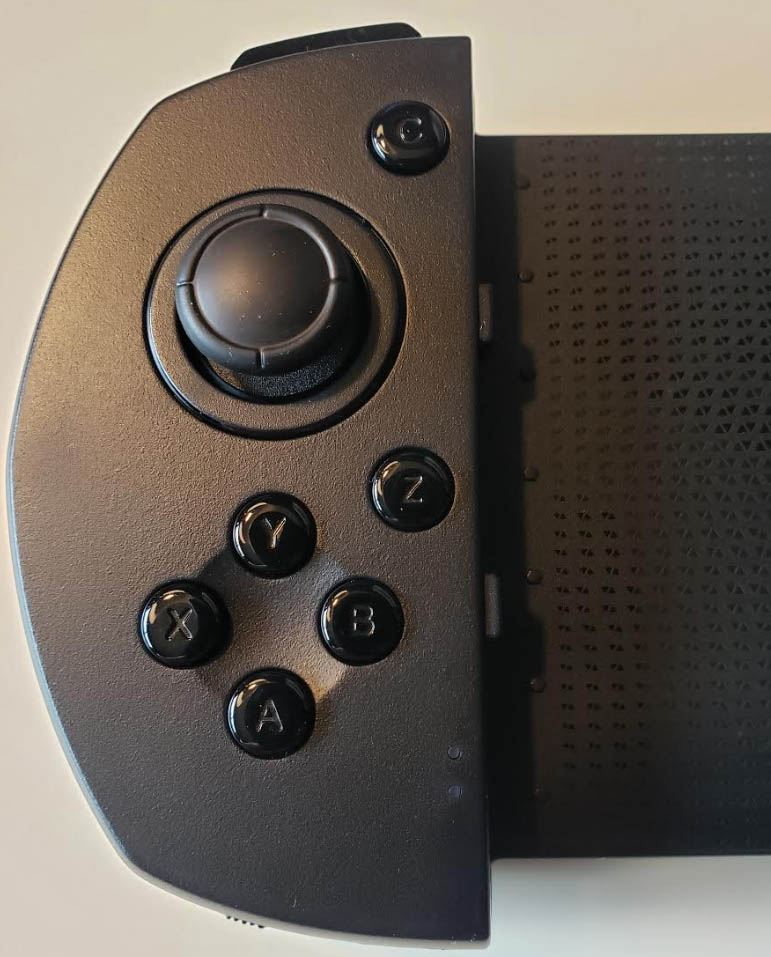 The triggers have fast mechanical action, putting them back into place within a fraction of a second after you press the switch. That allows for higher sensitivity and a shorter travel distance. You barely have to suppress the triggers at all for them to activate, it’s the total opposite of feeling as though the buttons are squishy and unresponsive.

Naturally, the buttons are fully configurable. You can map and remap them as needed.
That includes auto-fire, drop shot, and one click swaps for equipment. And the physical device is just as configurable, because the controller has a two-stage retractable structure. That allows you to slip the phone between the two sides, and keep your phone in a more stable permanent position while holding in and the controller. That way, your screen won’t shake while you’re playing.

For connectivity, as you would probably expect from a controlled aimed at serving mobile devices, the GameSir G6 was made to connect in a completely wireless fashion. That means there aren’t any awkward cables dangling around, as is sometimes the case with these kinds of controllers. And the wireless is carried over Bluetooth 5, which is the least iteration of the format.

Though the features of Bluetooth are typically touted relative to their advantages for audio equipment, Bluetooth 5 is actually excellent for gaming as well. It allows for exceptionally high sensitivity and low latency connections between your mobile devices and the controller. The end result feels as though you’re playing with a wired controller that just happens to have no wires.

The controller pulls around 3mAh off the included battery. That’s a ridiculously small amount of power, which is why even though the built-in battery is a little on the small side, it still can last a long time. Exactly how much time? Actually, pretty close to 80-hours of continuous playtime. 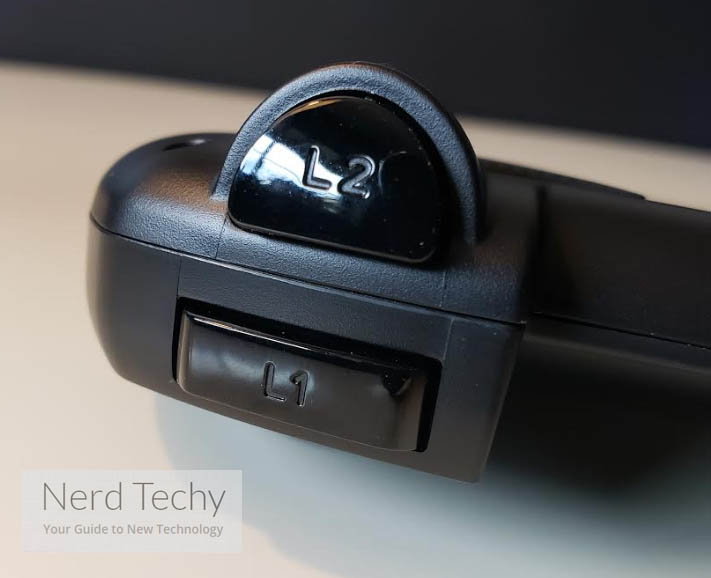 That estimate can shrink slightly depending on exactly how much button-mashing you’ll end up doing during those 80-hours. It can also shrink depending on how cold it is in the area where you’re playing your games. But assuming you’re not out in the Arctic, you can probably expect a worst case scenario to still provide at least 70-hours of playtime.

But you really wont wander far off the 80-hour estimate. At least, not at first. Like any device that contains a lithium-ion battery inside, sooner or later the battery will decay, and performance will slip. But you’re starting from such a high position that even when the battery decay sets in after a few years, you should still end up with 40+ hours to work with. 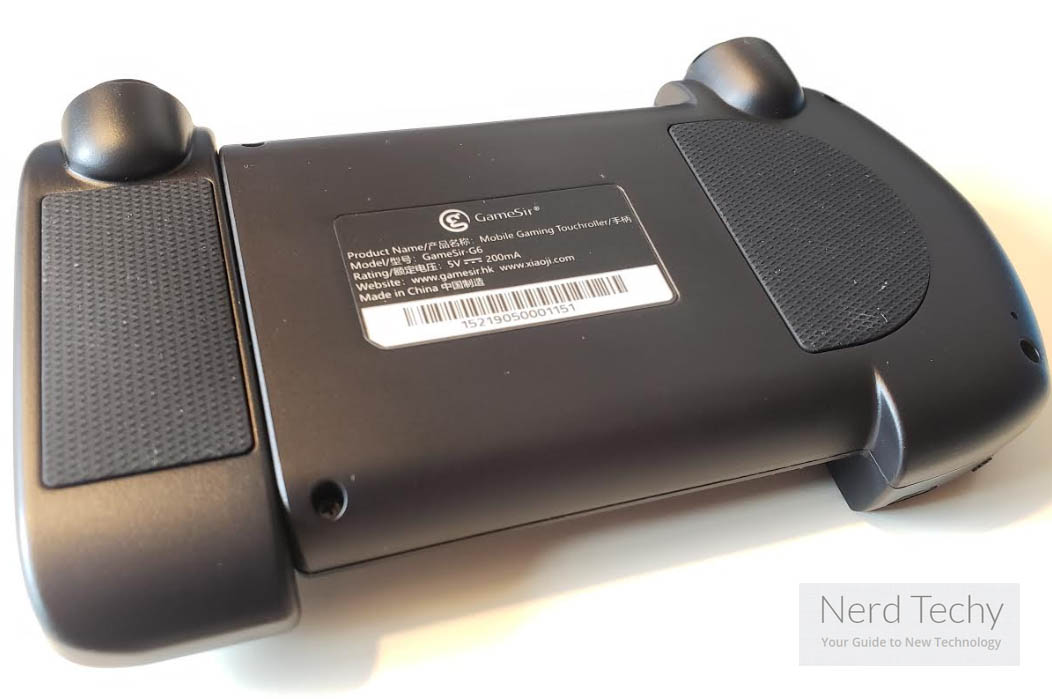 These buttons are supposed to be able to withstand about 3 million keystrokes. In practice, that means you should be able to expect around five years of very heavy use out of this controller. Very heavy means using the controller day and night, draining your phone over and over again.

Most of the time, you’re really not supposed to use your batteries while they are recharging. But the tiny power draw this battery requires has helped change the rules. The GameSir G6 was built in such a way that you are allowed to recharge it while it’s in use. You might do that with a portable power station, for instance. 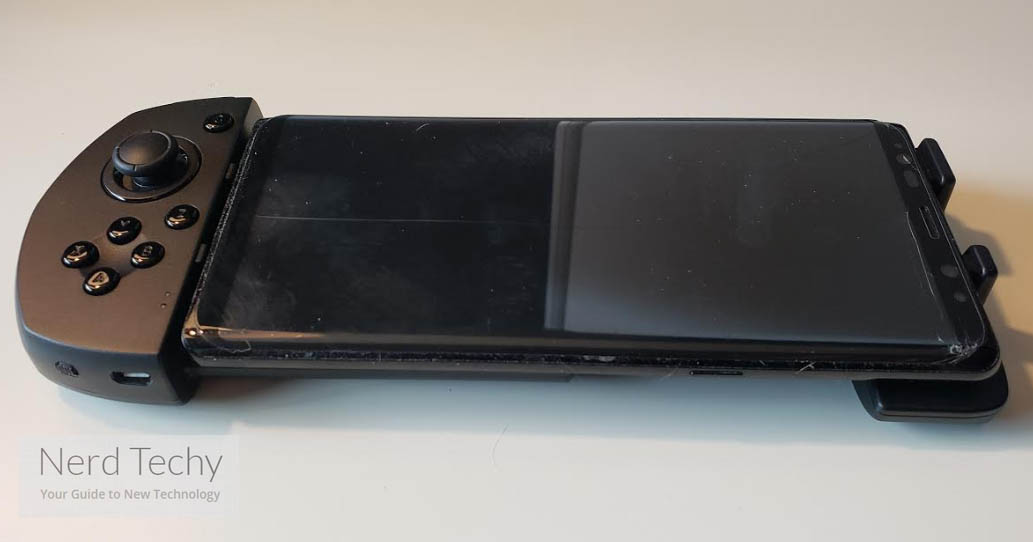 You’re also able to continue using your earphones or headsets, even while the controller is connected. Though depending on the model phone you have, you may find your port placement is blocked by the controller. The controller was designed to provide clear port access to every Apple phone. But if you’re trying to use a more obscure device, or a generation of iPhone that was invented after the release of the G6, you’re going to want to double check for access. 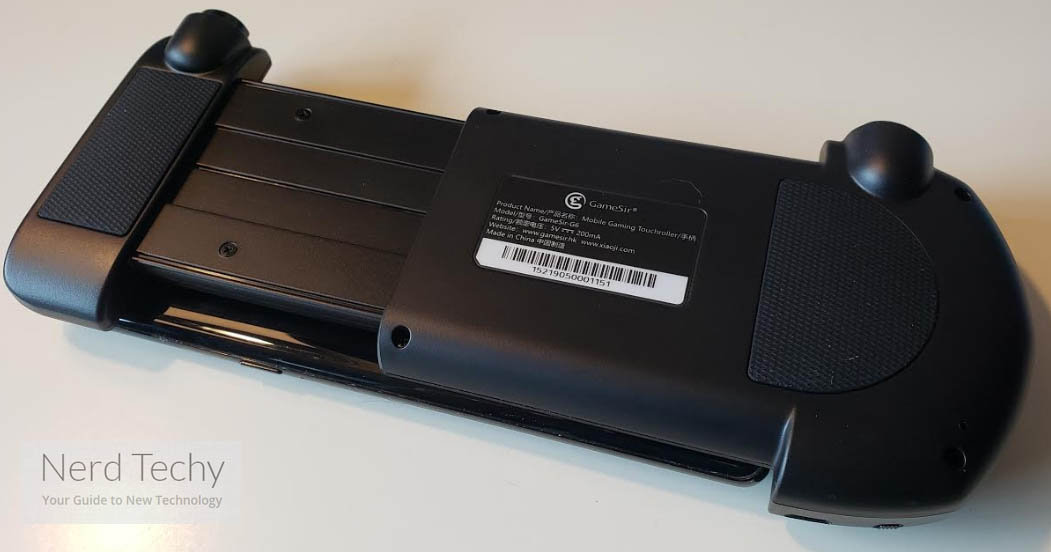 In total, there’s 30 different inputs you can squeeze out of this controller. That’s a combination of the backside trigger buttons, the ABXY buttons, the C and Z buttons, and the analogue joystick’s directional inputs. But 30 different ways to enter macros? That’s a lot of different options at your disposal.

There’s no vibration function, and that’s a minor drawback. But in terms of the technology inside this controller, everything is up to par. Bluetooth 5 keeps the wireless connection flawless, and it doesn’t hurt that you’re connected to a smartphone that’s literally in contact with the controller. The game buttons themselves are pretty excellent as well, they’ve been designed to the same standards you would expect from a console controller. 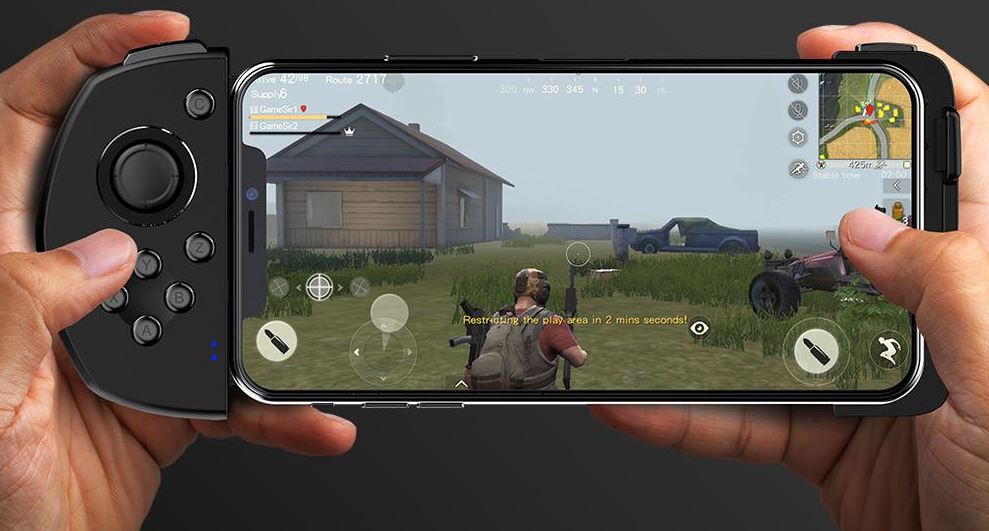 Though you might have reason to hesitate if you have giant hands, basically everybody else should be able to check out the GameSir G6 without a second thought… provided only that you’re someone who plays games which might be affected by a controller like the G6.