From a value perspective, you still can’t beat a wired mouse. Even though wireless technology has reached the point that it can effectively perform just as well as a wired mouse, going wired will always be a small fraction better. And that’s without mentioning the convenience of never having to recharge. But it takes more than that to make a great wired gaming mouse.

When people think BenQ, they mostly think about monitors. But over the past couple of years, BenQ has been making an entrance into the gaming space more broadly with their Zowie brand. Most recently, that includes the release of two new gaming mice, the S1 and the S2. Though it’s tough to call these two separate mice — they’re so similar that it’s really more like two styles of one mouse. 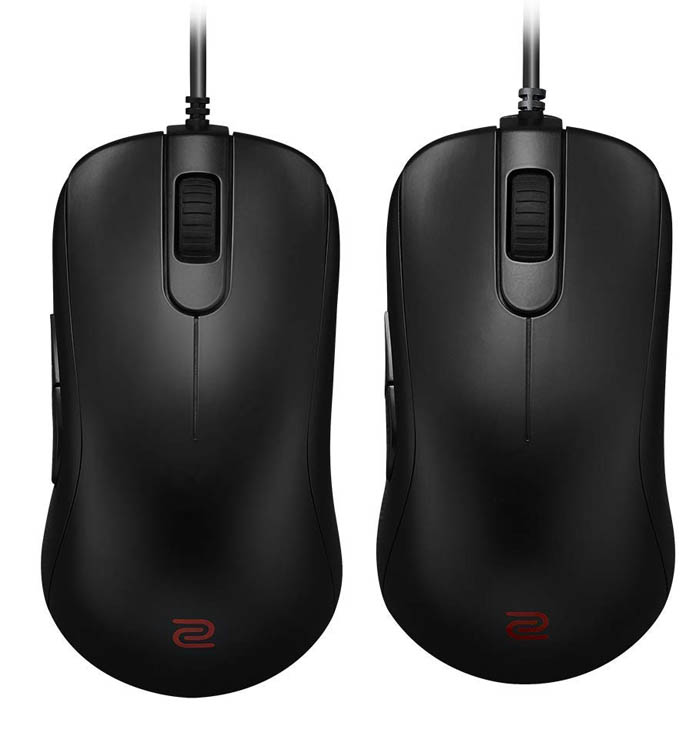 Aesthetically speaking, the S1 and the S2 look as though they are ambidextrous mice, but these are actually right handed mice. That’s because the position of the thumb buttons on the left side of the mouse would be inaccessible to the pinky finger of a left-handed person. The left-sided positioning might even be a big of a burden, causing you to accidentally click them with your pinky, depending on how you hold the mouse.

Apart from being a right handed mouse, both the S1 and the S2 have a clear slant in their design towards a specific type of gamers. Here you have to ask, what do you want on your gaming mouse? And the answer depends on what kind of gamer you are. If you’re playing MMOs or MOBA games, then you might want a mouse that has upwards of 12 buttons on it. That can be very handy for mapping out macros, especially if you can only use your left hand on the keyboard while playing. Other times, you really only need a couple of extra side buttons.

The S1 and S2 belong to the latter category. In addition, the left click and right click, you’ll find only a standard set of two thumb buttons, which are positioned on the left side of the mouse. Each button is about three quarters of an inch across, making them large enough for your fingers to easily discern between them during use. And you should be able to press both without repositioning your hand. 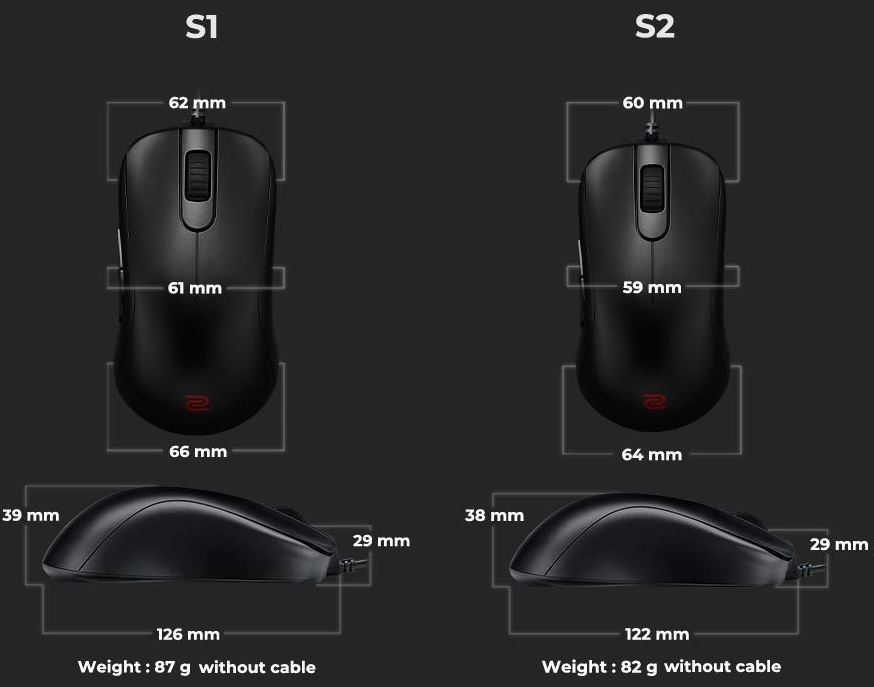 Stylistically, the Zowie S1 and S2 are a little bland. Often times, gaming mice are specifically developed with tons of RGB lighting in order to look a little more high-end. Then again, not everybody likes having a bunch of LEDs on their electronics, and some people even find them a bit distracting. For those who are more interested in a professional looking mouse, which could easily be taken into an office setting and used by serious professionals, the Zowie S1 and S2 fits the part. The black chassis is only highlighted by the BenQ Zowie logo using a small red icon that’s painted on the base of the palm rest. The rest of the mouse is otherwise fairly non-descript.

Turning to the bottom side, you’ll first find a DPI sensor button on the left side of the S1’s sensor. If you press the button once, you’ll move from 125Hz polling rate, to a 500Hz polling rate. If you press it again, you’ll leap from 500Hz to 1000Hz. One more click will drop you back to 125Hz. Pretty straightforward. And being able to do that from on the physical hardware instead of having to dig around inside a software program is pretty convenient.

On the other side of the sensor, you’ll find a DPI button, which functions in effectively the same way. The standard sensor begins at 400dpi, but with clicking it, you can raise that to 800dpi, 1600dpi, or 3200dpi. When you look at similar gaming mice, like the ones made by Logitech, you’ll find that its usually possible to set your own specific DPI settings.

For example, you could open Logitech’s gaming software and then decide your DPI buttons should move you between 531dpi, 793dpi, and 2515dpi. With most gaming mice, you’re usually allowed to make your own highly DPI settings – but BenQ is forcing you to pick between their presets. That’s a little restrictive, which might make this mouse alienating to certain kinds of pro-gamers.

However, for people who don’t want to bother having to setup their own DPI profiles, this system is admittedly very simple and straightforward. And the distances between each DPI setting they’ve provided do make sense. Starting at 800dpi is a nice low point that should be sufficient for most players who want to drop their DPI to lower settings, with few exceptions.

And the leap to 1600dpi and 3200dpi make just as much sense, with the 3200dpi setting being ideal for browsing the web, or other circumstances where you want to make small motions with your hand and get big motions out of your mouse cursor. Being able to move the polling rate is another nice convenience, and here it certainly makes a lot more sense that you’re picking between a couple of preset figures.

If you’re playing a FPS game, you might want to throw your mouse up to 1000Hz. But you probably won’t end up needing to move this around that frequently, depending on the stability of the surface which your mouse is resting on while in use.

And there’s also a hidden benefit to having all the buttons be available through hardware interaction. More specifically, you don’t have to download any special software to configure or maintain the Zowie S1 or S2. The mouse is entirely self-contained, which also means you don’t need to worry about software support being eliminated in the future.

Different people hold their mice in different ways. Part of this is just personal preference because some people are comfortable in different positons. Part of it has to do with the length of your fingers, the size of your hands, and even the types of games and activities you end up doing on your PC.

Which brings us to the one big difference between the Zowie S1 and the Zowie S2. The S1 is a medium sized mouse, which has a build most people would describe as average. It’s good for people who have average sized hands, and it’s pretty solid for people who have slightly large hands. On the other hand, the S2 is a slightly smaller version of the S1. Most women, young adults, and men with smaller hands are going to be better off selecting the S2. 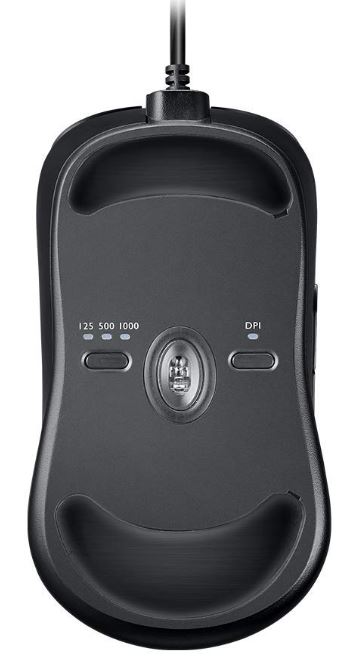 How much of a difference are we talking about? Well, the S1 measures 4.96 x 2.4 x 1.5 inches, and the S2 measures 4.8 x 2.32 x 1.5 inches. So it’s a difference of a fraction of an inch. Those differences are so small that the imperial measurement system makes them difficult to appreciate. In metric terms, the S2 is only 2mm shorter than the S1. It’s only 2mm less wide, and 1mm shorter.

Of course, that also means the S2 is 5g lighter than the S1 — but that kind of weight difference is something that most gamers will struggle to appreciate or feel. Both end up staying quite lightweight, and lighter than most wireless mice because of the lack of a need for carrying a battery.

Interestingly, the Zowie S1 and the Zowie S2 were made to be held in either a palm grip or a claw grip. That makes them approachable for most people. And if you use a claw grip, even if you have small hands, you might have a good reason to prefer the slightly larger S1. But again, the difference is fairly small, and it can be tough to appreciate even in a side by side comparison, so it’s nothing to get hung up about.

Another small detail of design that’s easy to overlook is how BenQ has positioned the cable at the end of the mouse. It’s angled slightly upwards, which reduces the amount of cable drag you experience next to your mouse. Of course, when you’re using a mouse with a cable, you can’t eliminate cable drag entirely. But the angling does help create a smoother motion.

It would have been nice if you could attach and detach the cable. That’s by no means an essential feature, but being able to do so can make cleaning your mouse, or transporting your mouse a little easier. It can also be better in the interests of longevity because cables are one of the places where mice are most vulnerable. Unfortunately, the cable on the S1 and S2 is nothing special. It’s not woven in nylon or given extra layers of protection, which means it’s more vulnerable to damage and less likely to survive longer than a decade.

The S1 and S2 are right handed mice. Even though their design looks like an ambidextrous mouse, and someone might easily mistake it for one, these really aren’t the best call for a left handed person. The buttons on the side of the mouse can’t be unbound, and would feel awkward impacting with your pinky.

In terms of their support for gaming, being able to move up and down the polling rate and DPI adjustment is fantastic. You don’t need any special driver software to do it, which makes this a good mouse for using on several PCs, or for using at a friend’s place. Though you can’t customize those settings with the same level of depth on some other gaming mice, simplicity can be a good thing.

Could you care less about paying for the aesthetic of LEDs? Would you get annoyed by the LEDs and flip them off anyway? That being the case, you’ll probably like the straightforward and professional style of the Zowie S1 & S2 gaming mice. For a discerning gamer who really cares more about performance than anything else, these mice are probably a good call.