Over the past year, 360-degree video has come a long way. When Facebook announced support for the video format, journalists implied that it was a passing gimmick. The format did gain some traction early on, and many concerts, DJs, and news events were broadcast in 360. However, the high cost of equipment meant that this technology was inaccessible to consumers.

Giroptic wants to change all that. They made a splash with their first consumer-accessible 3D cam, but limitations of the platform meant that it’s wasn’t ideal for all uses. Now, they’re back with the simply-titled Giroptic iO HD 360° Camera. Is this little camera going to bring immersive video to the home, or is it simply another gimmick? We put it to the test to find out. 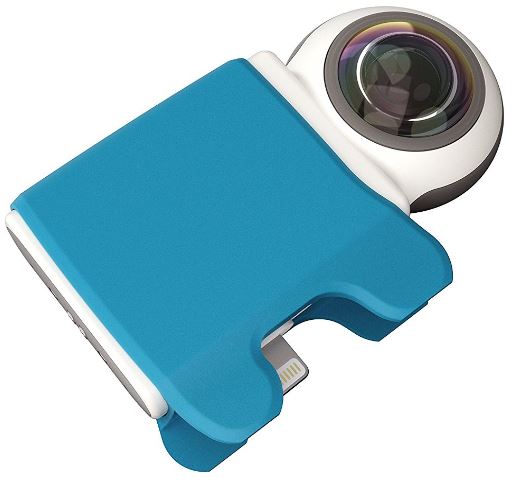 Having used several 360° cameras before, we were shocked to see how small this device was. Measuring 2.9 inches by 1.4 inches, it can fit comfortably in the palm of your hand. And at only half an inch thick, you could slip it into your pocket as well. But this isn’t a standalone camera. It is an add on for your phone, and can only be used when plugged in. Designing it this way means that it’s more powerful than most 360° cameras on the market, but costs a fraction of the price.

Due to the large amount of data being transferred, Groptic’s 360° Camera is only available with a Lightening port. This means that it will work only on IOS devices. The app that runs it is also pretty demanding. If you have an iPhone 5S and up, you’ll have no problems. It also works with the iPad Pro, Mini (2 and up), or iPad Air (2 and up).

It’s designed with live streaming in mind, and comes pre-configured to work with a number of popular services. Facebook, YouTube, Periscope, and Twitter are supported as of now. But additional services are scheduled to be supported in the future. 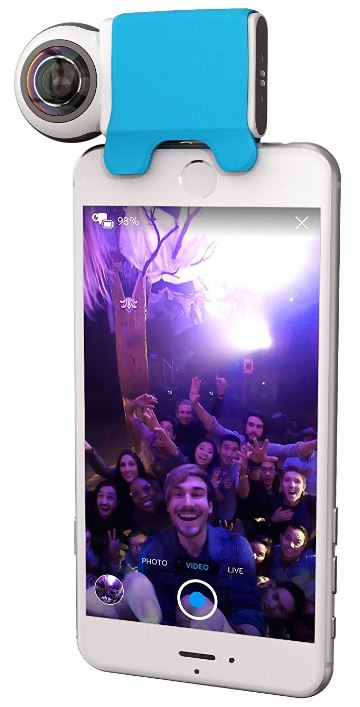 Opening the box, you’ll find three things inside. There is the camera itself, a silicone sleeve, and a hard-plastic case. The sleeve fits over the camera, and has four little legs on the bottom that grip around your phone. The sleeve gives it a cartoony, animal-like appearance, and helps keep the camera securely on your phone. The enclosure of the camera fits directly against the bottom of your phone, which means that you’ll have to take your case of before you can use it.

Once it’s plugged in, you can download the IO 360 app from the app store. There is no Bluetooth or WiFi setup required like some of the other 360° cameras we tested, so getting it up and running is very simple. The app automatically detects which social networks you are logged into before you can stream. Although Facebook did request permission on behalf of the app, the setup procedure was no more challenging that downloading an app. 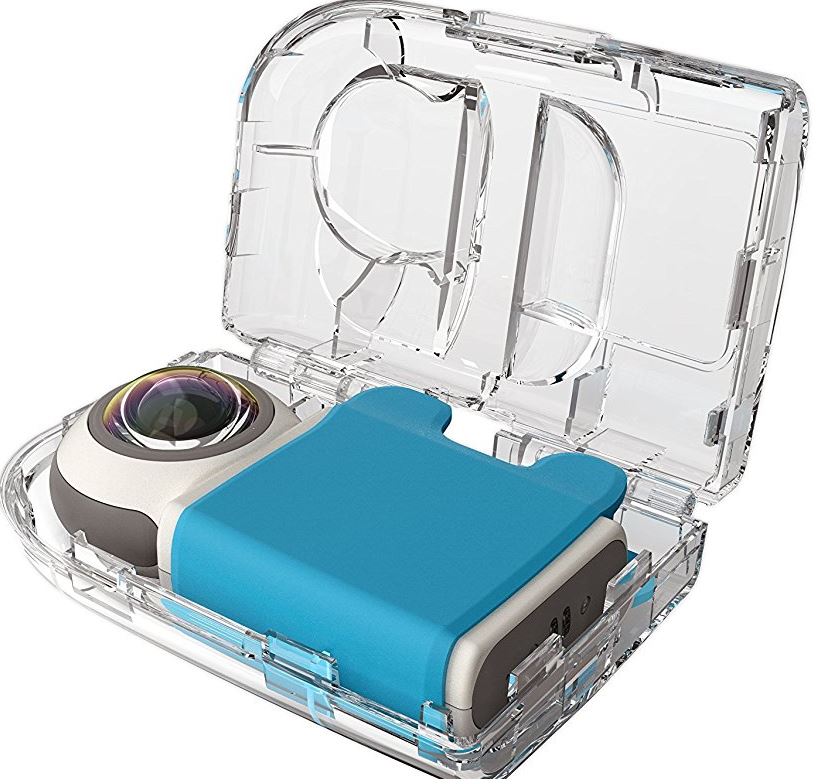 Using the IO 360 app is very intuitive right from the start. It works just like the camera app on your phone. You see an image on the screen, giving you the option to either take a picture or start video recording. One of the things we liked about this particular implementation is that what you see on the screen looks like a normal image. You can swipe your finger around to ‘move’ the display to the subject of your choice.

Technically, you’re not really previewing the full video. However, trying to cram an immersive video feed onto a square display makes everything look stretched and skewed. It’s very hard to understand what you’re filming, so this is the most accessible way to do so. 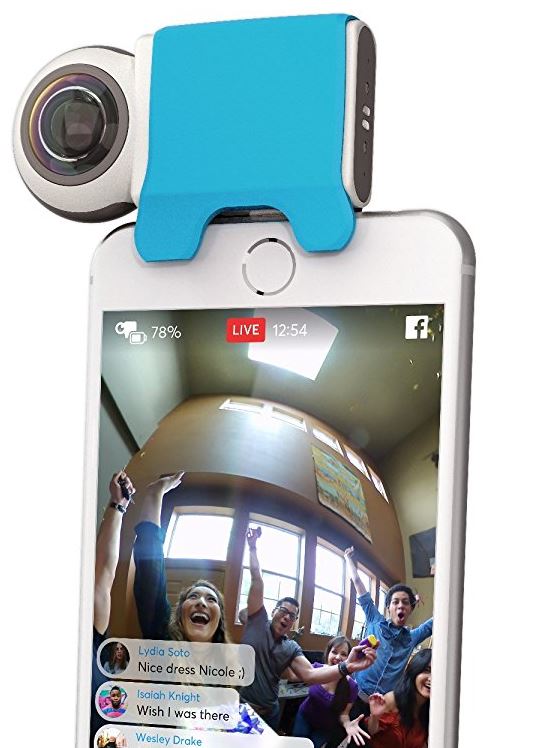 When you record a video, it is saved directly into your camera roll. You can watch the video with any standard player, but you do get the distorted appearance. If you play it back in the IO 360 app, you get the proper 360-degree experience.

On our iPhone 7, the app felt very responsive and fast. There is a split second of delay between what you see on your screen and what happens in the real world, which is comparable with a standard camera. Input is responded to quickly, and the app didn’t feel laggy at all. If you’re using an iPhone 5S or anything that barely meets the minimum requirements, it’s possible that it will be a little more sluggish. But overall, we’d say the app is just as good as the stock camera app.

Having used our fair share of gimmicky 360° cameras, the high-quality video produced by the Giroptic model was like a breath of fresh air. Colors were clear and vibrant, lines where sharp and detailed, and there was very little distortion or noise. In terms of color and presentation, the video looks just as good as what you’d get out of your stock camera.

But there is one area where you’ll be making a few compromises – resolution. On paper, 1920 x 960 seems pretty good. After all, that’s just a few pixels short of 1080p, right? Not exactly.

When you watch a 1080p HD movie, you’re seeing all of the pixels on the screen at the same time. When you’re watching a 3D video, you’re only seeing a portion of the pixels on the screen. On most displays, you’re seeing about 25% of the full field of view at any given time. Even though the video was recorded in close to 1080p, what you see on your screen is a step above 480p.
For streaming, this is more than adequate. Most streams are limited by bandwidth anyway, and this is the best quality that you are going to get, even if you had a higher resolution camera. Compared to standard video, you do lose a little bit of details. But the excellent color reproduction and sharp lenses to help compensate for that. 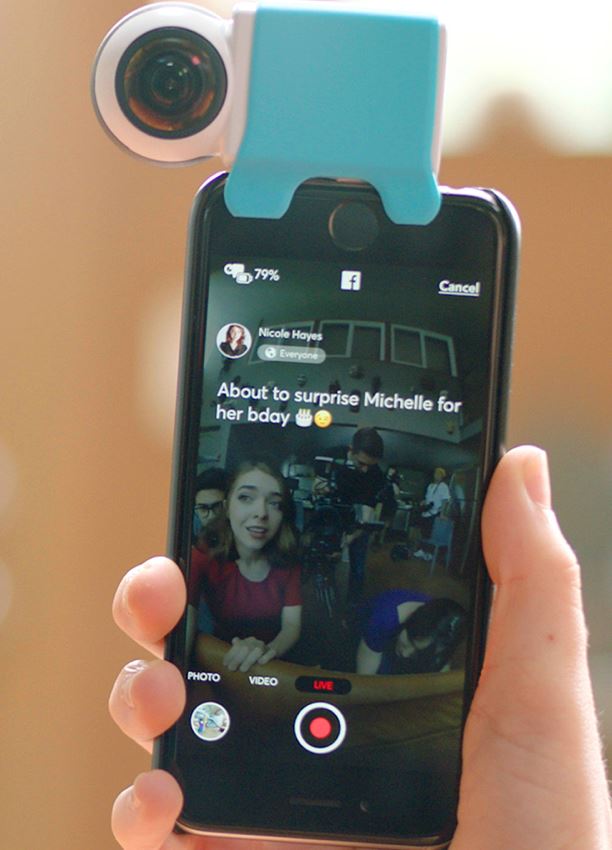 Getting a stream up and running couldn’t be easier. While you’re in live view in the app, you’ll see three small indicators near the record button. “Video” is in the center, “Photo” is to the left, and “Live” is to the right. By swiping the whole screen to the right, any video you take will be live streamed to the service of your choosing. When you hit the record button, a window will pop up asking which service you’d like to stream to. Both Facebook and Twitter were one-click operations, while YouTube required a little extra info.

While streaming, you are using quite a bit of data. It is possible to stream over LTE, but you should expect to use 1.5GB per hour. Ideally, you’ll be streaming where there is a Wi-Fi connection. Either way, the camera does buffer about 15 seconds of video, so you won’t have the feed stutter or cut out. 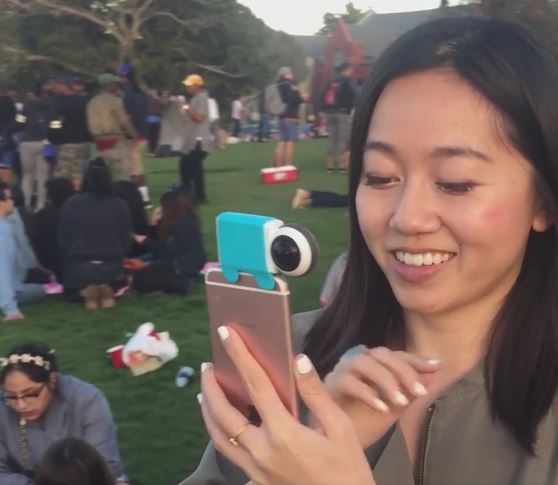 For the most part, using the camera was no different than any other. But there were two key usability differences that stood out to us. The first was how the lens was shaped. Because each lens captures a full 180 degrees of light, the lenses are quite round. They stick out a fair bit from your phone, and are at risk to get scratched if you just throw it in your pocket along with a set of keys. When not in use, it’s important that you put it back in the case.

Another thing to consider is the battery life. Most external cameras are known to drain the battery of your phone. What Giroptic did was install a lithium ion battery inside the camera.

Although it communicates with your phone through the lightening port, it doesn’t use any of your phones internal battery. It takes about 40 minutes to charge the camera up, and you get about 1.5 hours of use out of it. 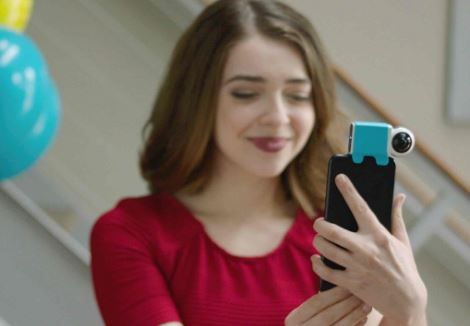 The internal battery isn’t user replaceable, which limits the functional life of this camera. Typically, a lithium battery will last about 500 cycles. A die-hard streamer might broadcast for a half hour per day, five days per week. In this circumstance, you’d get about 3 years before you noticed a decline in battery life. 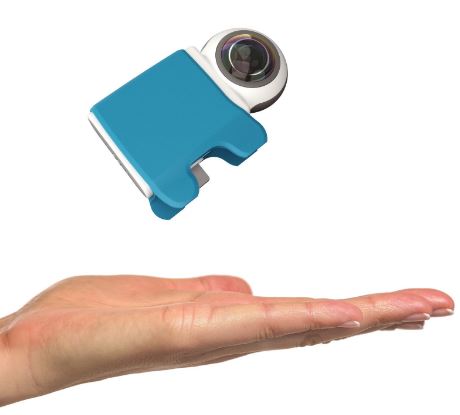 If you’re not interested in streaming, this might not be the best camera for you. For sports, the Nikon Keymission 360 is a pretty impressive piece of hardware. It doesn’t require the user if your phone, and is durable enough to withstand extreme environments.