If you spend much time with your smartphone, then you know the terror of looking down at a battery indicator and seeing only one bar. Even if you’re not playing around on your mobile devices all day, batteries gradually lose their maximum capacity with the passage of time. Whether you’re trying to compensate for a low battery lifespan or you’re hammering away at your favorite devices with heavy use, a power bank can help keep you online. 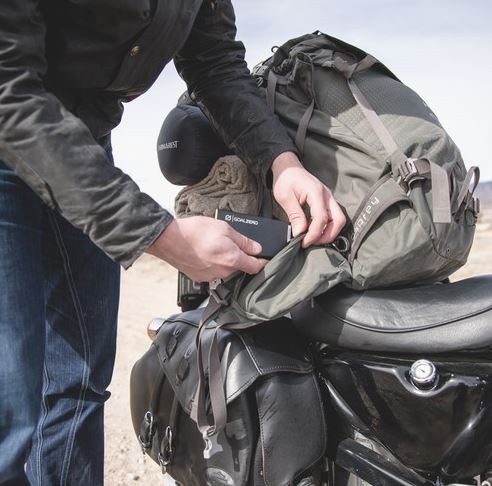 When you’re buying large batteries, there’s two concerns. The first is avoiding terrible products. If you’ve bought a couple different brands of disposable batteries, then you know the kind of variation in quality they have. The same is true of lithium-ion batteries, and it’s not uncommon to encounter products using third-rate design.

Your second concern is safety. Lithium-ion batteries contain an incredible amount of energy, and are essentially small bombs. If you’re buying something that has the potential to be dangerous, you want to know it’s well built, and you want to know it’s built with features like short circuit and over-charging protection. 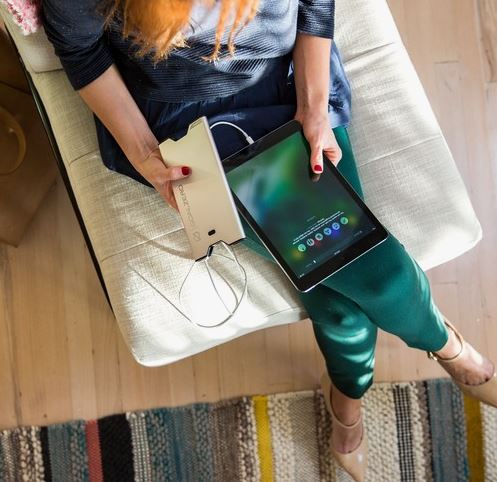 Beyond that, choosing the right power bank is mostly about capacity. Generally speaking, batteries rated with a higher milliAmpere (mAh) will have greater capacity. If your phone uses a 1000mAH battery, then a power bank with a 1000mAH capacity would be capable of charging it about once. By contrast, a 10,000mAH battery would be equipped to fully charge your phone about five times.

But bigger isn’t necessarily better. It’s not hard to find giant batteries on the market, but choosing one adds to the weight of the power bank, not to mention the cost. Choosing the right power bank is about finding the option that’s most appropriate to the kind of power demands you’re planning around. For getting one charge out of one phone, a modest 2000mAH battery would be well suited to the task.

Choosing the right power capacity is a tradeoff. You want to extend the lifespan of your power bank without ending up carrying around a giant weight in the process. That’s because the physical build of the device plays into its portability, including whether or not it’s a hassle to hold and move. 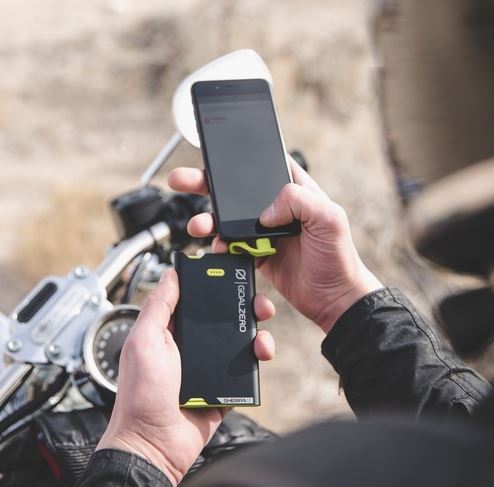 Another thing to note is the amperage each port on the power bank, which helps determine charging speeds. 2-amps is optimal for charging smartphones, and provides moderately fast charges for tablets. 2.4 amp ports are equipped to handle multiple devices simultaneously, though the charge speed for each individually will suffer. And 5.4 amp ports can charge multiple devices at the highest speeds.

If you’re not sure that your devices will work with a power bank, you’ll want to look at the voltage output of the power bank and ensure it matches up. If the output voltage is lower than the devices you want to charge, it won’t work. But unless you’re using obscure devices with unique power demands, it’s unlikely you’ll run into any of those issues. 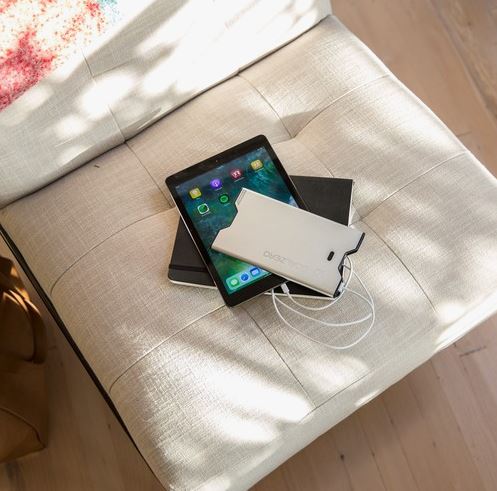 Most power bank chargers will be USB based. Some of the older designs on the market still make use of ancient ports and cables. But in the case of USB, there’s essentially no reason to look for legacy ports, and essentially no reason to choose older designs. Fortunately, many modern power banks are adapting the latest version of the USB standard. But you’ll still want to know if there’s more than on USB connection, allowing you to charge more than one thing at a time. You’ll also want to know the specific way that you end up making a connection.

Often times, the USB used for charging are built-in to their power bank. Whether or not that’s a good feature mostly comes down to taste. You may enjoy the convenience of always having a cable right there and ready, or it may bug you to death. A similar concern is whether or not an electric socket and a USB cable are the only way it’s possible to charge the power bank. If you’re spending extended periods of time in nature, you might want recharge features that don’t depend on you being among the rest of civilization.

When it comes to batteries, you tend to get exactly what you pay for. Like with the disposable batteries you’ll find at a drug store, there’s a huge range of quality on lithium-ion batteries. It’s important you don’t go extremely cheap because you’re almost guaranteed to buy something that won’t live up to humble expectations.

On the other hand, all batteries are essentially perishable goods. After one year of regular use, lithium-ion batteries can lose nearly half of their total charging capacity. After two or three years, even the best batteries will have endured significant wear. That means you don’t probably don’t want to invest in some insanely expensive power bank because in all likelihood, you’ll need to replace it after a couple of years of use. A great power bank has to ride the line between being inexpensive enough to be replaceable, but quality enough to last for years. 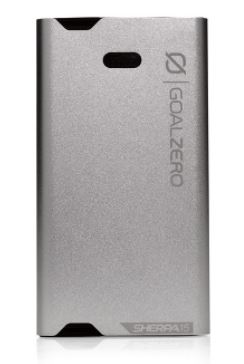 Most people don’t need to carry around a battery the size of a brick. If you’re only looking to charge one or two devices, and you can charge your power bank each night, then you’re looking for a power bank like the Sherpa 15. It’s got a modern, slim body made from a durable aluminum casing. The seam-free design looks as durable as it feels, and provides an aesthetic that doesn’t look out of place next to expensive mobile devices. 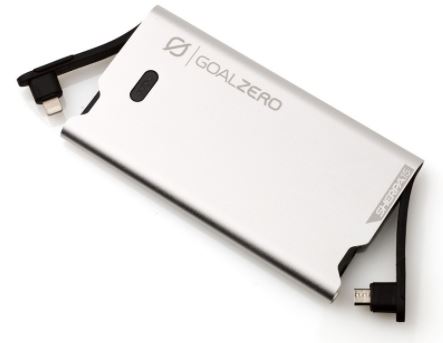 The goal of the Sherpa 15 is to provide a streamlined and convenient charge, as emphasized by its unique approach to cables. It’s made with a built-in micro USB, USB-C, and Lighting cable, so you don’t have to worry about losing any attachments. Each connection is 2.1A, offering a quick charge for smartphones, but a dragging charge on larger tablet devices.
The Sherpa 15 is a 3,870mAh battery, giving it the same weight and capacity as you’ll find on many laptop batteries. Although the 15 has been specifically designed with smartphones in mind, there’s nothing stopping you from powering up your other devices with it. It weighs only 4.6oz, and is built with a slim 5 x 2.7 x 0.4-inch body. Along that edges of that slim body, you’ll find the built-in cabling safely tucked away. 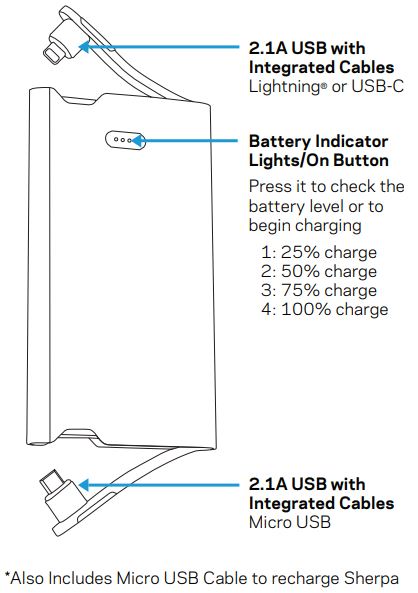 Charge Time and Other Considerations

You can recharge the Sherpa 15 through a standard wall charger for 2.5 hours, or you can connect it to a compatible solar panel to charge between 4 and 8 hours. Charge times depend largely on the panel you’re using and the weather conditions on that day, so they’re hard to predict accurately. When fully charged, the battery is well suited for 1-2 charges of a smartphone, 2-4 charges for a headlamp, or 2-3 charges of a POV camera. 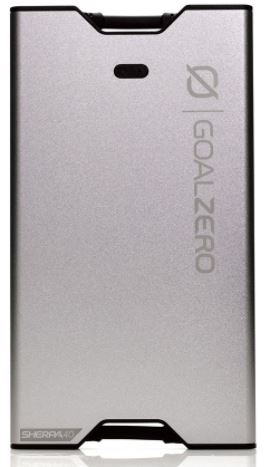 Sometimes you want a bigger battery. If you’re going camping in the woods and won’t have access to electrical outlets for three days, then you’re going to want to be able to get more than two charges out of your power bank. If you’re trying to power up power-hungry devices like tablets, then you’re going to want a battery that won’t run out of juice before you even complete the charge. And unless you place an extremely high demand on portability, there’s essentially no reason not to choose a bigger bank. 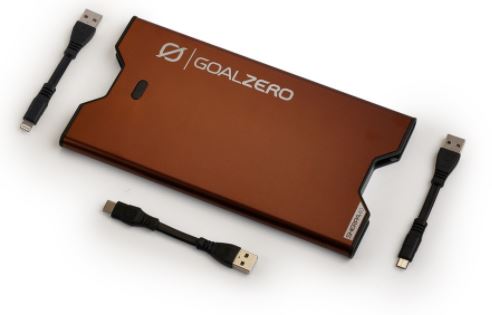 And the Sherpa 40 is exactly that. It uses an immensely large 12,000 mAh battery, paired with an equally impressive 4.8A USB output. That makes the Sherpa 40 well equipped to rapidly charge up all of your devices, including the most power hungry tablets. Unlike the Sherpa 15, there aren’t any built-in wires. But the Sherpa 40 includes a number of portable four-inch cables, including a USB-C cable, Lighting cable, and micro USB cable.

Physically speaking, the build of this device is a relatively lengthy 7.5 x 4.2 x 0.45-inches, making it only about two inches taller and longer than the Sherpa 15. That long square design closely resembles the dimensions of an ordinary smartphone. And in spite of being fairly heavy, it maintains nearly all of the portability of the 15. But the total weight of the Sherpa 40 is almost an entire pound, meaning it weighs roughly three times as much as the Sherpa 15. 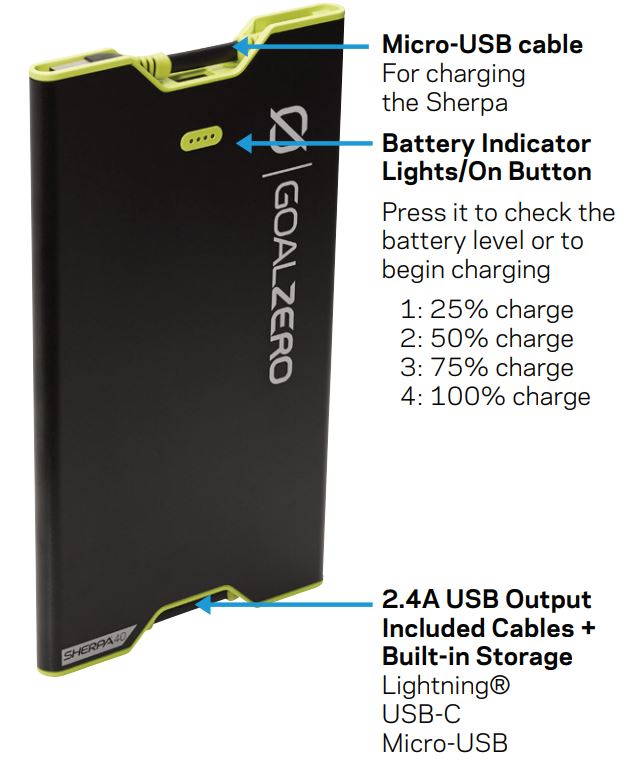 Charge Time and Other Considerations

Like with the Sherpa 15, the Sherpa 40 can recharge by attaching the bank to a solar panel. Solar paneling isn’t included, which makes the solar charge time of the Sherpa 40 is difficult to estimate. It will ultimately depend on weather conditions and the solar panels you end up using, but a full charge is usually possible between 8 and 12 hours. When you’re recharging from a wall socket, a full charge takes just under eight hours.

From one full charge of this power bank, you’ll be able to squeeze 3-4 smartphone charges, 4-5 charges of a POV camera, and 1-2 complete tablet recharges. That’s thanks to that huge 12,000mAh battery, which is similar to cramming the power of three full laptop batteries into one device.

Choosing Between the Sherpa 15 and Sherpa 40

Both the Sherpa 15 and the Sherpa 40 share a number of qualities. They both use a sturdy metal-based build, and they’re both built to be equal parts powerful and portable. Both include a 30-day money back guarantee, and support the same types of essential connectivity. Both can be rigged to a solar panel, helping you get unlimited free charges even if you’re in the middle of the woods. It may be tempting to think of the Sherpa 40 as a better version of the Sherpa 15, but each was designed for a different type of person.

What the Sherpa 15 offers is portability, convenience, and a strong value. You’re not going to have to worry about losing cables, or about the size and weight of the device becoming burdensome. If you already carry a smartphone, then you can probably carry around the Sherpa 15 all day without even noticing it’s there. And yet it doesn’t look cheap, it has the kind of sturdy build you want for a potentially hazardous object like a battery, and it generally delivers on all it tries to offer. It’ll be the right pick for most people who are looking for a power bank.

But sometimes you’re dealing with bigger battery problems. If you’re charging multiple devices, you’re going camping, or you’re otherwise chewing through lots of electricity, then you’re going to want a bigger battery. The Sherpa 40 is about as large as you can make a power bank without it becoming burdensome. It’s only slightly larger than the Sherpa 15, but it has tremendously more power. The cabling isn’t attached, but its amperage is high enough to charge your devices much faster than the Sherpa 15. If you’re looking for a big battery and all that comes with it, the Sherpa 40 is an excellent choice.