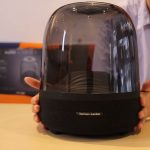 If you think Bluetooth speakers aren’t worth owning, you can be forgiven. Not long ago, this was actually true. Bluetooth speakers offered some of the lowest quality of any speaker type. Even an expensive, well-constructed model was limited by poor connectivity. But this has changed in recent years. The invention of True Wireless Stereo and Bluetooth have significantly improved wireless audio quality. Now, you can enjoy high-bitrate audio, even on a wireless connection. As long as the speaker is well-constructed, it’s going to sound just fine.

Over the years, we’ve reviewed several Bluetooth speakers, from boom box-sized units to pint-sized speakers. In general, we’ve stuck with the same few tried and true manufacturers, but today, we opted for something different. We’re about to review the Harman Kardon Aura Studio 3. Harman Kardon is a well-known European manufacturer, but might be unfamiliar to some American consumers. Nonetheless, they have a longstanding reputation for building quality, well-engineered speakers. Because of this, we were excited to see what the Aura Studio 3 has to offer.

We’re going to examine the speaker thoroughly, from top to bottom. We’ll start with the physical design, including the attractive LED lights. Next, we’ll talk about the power supply and the connectivity of the unit. Finally, we’ll look at the most important feature; the sound quality. Once we fully understand all the features, we’ll be prepared to render a final verdict. Has Harman Kardon lived up to their international reputation for high quality? Or is this one Bluetooth speaker you should give a hard pass. Let’s dig in, and see what it brings to the table! 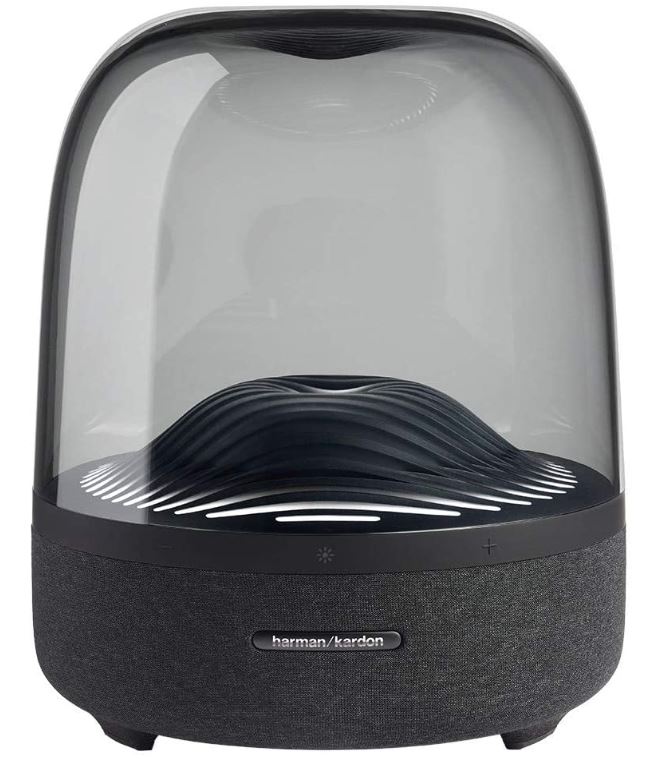 The first thing we noticed about the Aura Studio 3 is its unusual design. Most Bluetooth speakers look like, well, speakers. They have a faceplate with a grill or screen, just like traditional wired speakers. Even 360-degree speakers that look like Coke cans still look like speakers, albeit unorthodox ones. On the other hand, the Aura Studio 3 looks more like a humidifier than a speaker. It’s all black, with a round, solid base and a smoky bubble lid that arches over the top. If you’ve ever played the board game “Trouble”, you’ll be tempted to press down on the lid. 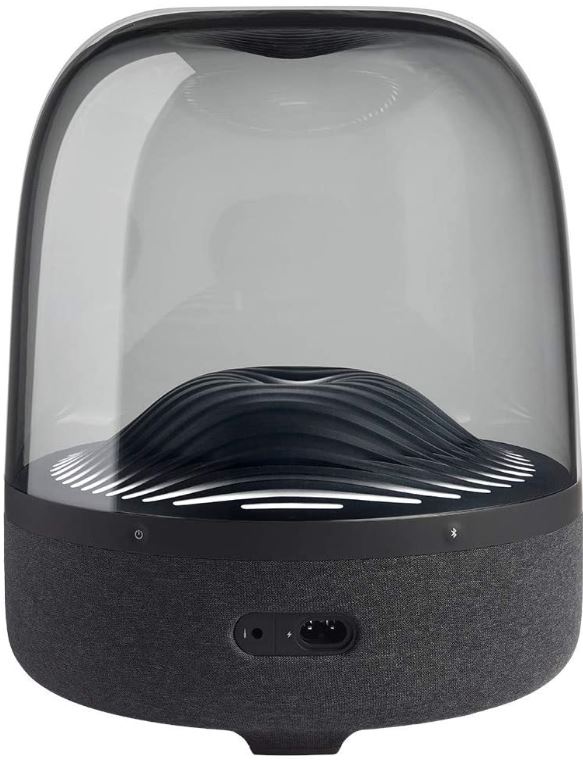 The reason for this design is that the speaker has built-in LED lights. They illuminate the inside of the dome, and move in a rippling pattern along with the music. The light is projected from a series of curved ridges on the top of the base, and reflects on the top of the dome. In a well-lit room, the effect is understated and you’ll barely even notice it. On the other hand, when the room lights are dim, the light effect on the dome is fairly striking. In other words, you’re not just looking at a speaker. You’re looking at a piece of home décor that’s sure to be a conversation piece at your next party.

The overall dimensions of the speaker are 9.1 inches in diameter and 11.2 inches in height. This lends it a medium-sized profile, which is suitable for most locations. You can set it on a table, a shelf, a desk, or just about anywhere it’s suitable to place a speaker. And at 7 pounds, it’s relatively light for the size. Not only that, but by its very nature, the design is bottom-heavy. As a result, it’s just about impossible to knock over by accident. 90 percent of the weight is located in the bottom third of the unit. Even a hard bump will not cause it to fall over like some other Bluetooth speaker models. 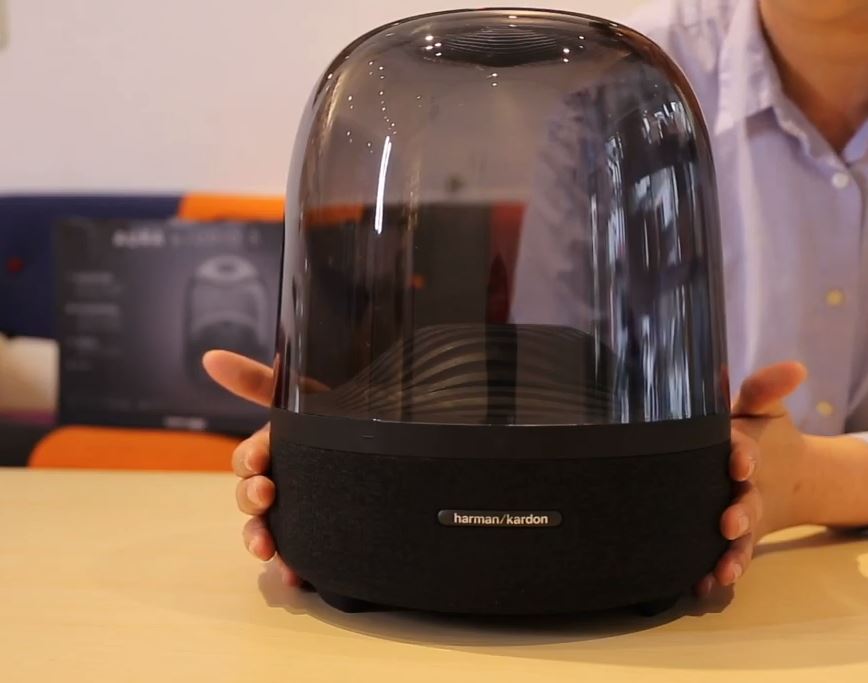 On the bottom of the speaker, you’ll find a set of three rubber feet. These feet are anti-skid, and prevent slipping, even on a wet or slippery surface. There’s also a USB port, which is covered by a rubber plug. This port is for service use only, and doesn’t actually serve as an audio input. Unless you need to have the firmware updated, it’s never going to see any use. On the back of the speaker, you’ll find a couple of different ports. The first is a simple 2-prong power port, which connects to the AC power adapter. The second is a 3.5mm aux jack, which we’ll talk about more in a minute. 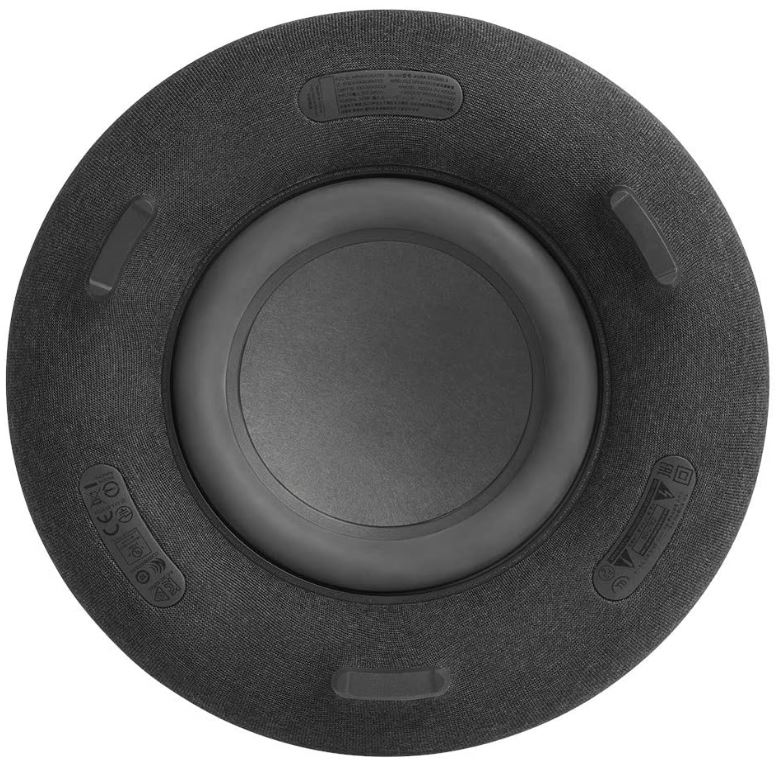 On the front of the base, just under the dome, you’ll see a three different control buttons. These are relatively simple and easy to understand, so the learning curve is very shallow. You get a simple volume up and volume down button, along with an on/off button for the LED lights. On the back, there’s a power button, as well as a button to turn the Bluetooth on and off. All of these buttons are located on a narrow band between the base and the top dome. They’re very discreet, so you won’t really see them unless you’re looking for them.

Along with the speaker and the instruction sheet, you’ll also get a couple of extras. First, you’ll get a power cable with a 2-prong AC plug. Keep in mind that we’re reviewing the American version of this speaker, so it supports 110/120-volt power only. Harman Kardon offers a different version of the AC plug for European customers. You’ll also get a warranty card. Make sure to send this card in as soon as possible to ensure you’re covered by Harmon Kardon’s warranty.

The Harmon Kardon Aura Studio 3 is a bit unusual for a Bluetooth speaker. Most Bluetooth speakers have a battery as the primary power source. As a result, they’re generally very portable. You can move them from room to room, or even take them outside without losing power. On the other hand, the Aura Studio 3 supports corded power only. This is a limiting factor, since you’ll only be able to use it within a few feet of a power outlet. On the other hand, you won’t have to worry about your battery running out, either. But since most Bluetooth speakers also have the option for USB power, this isn’t a major benefit. 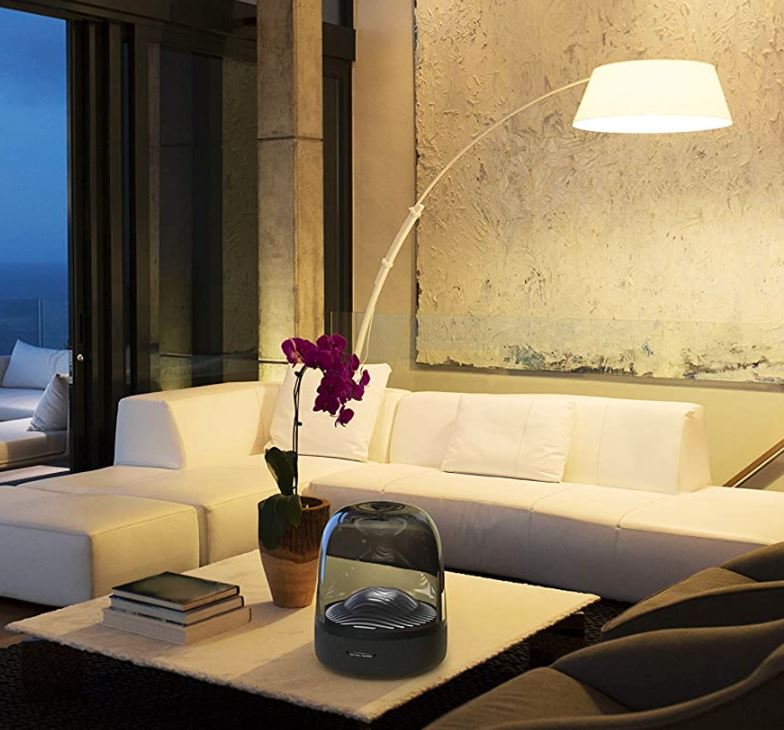 Another limiting factor of the Aura Studio 3 is that you don’t get a ton of input options. Now, we should be clear, the assumption is that you’re planning on using Bluetooth. This is more or less true for any Bluetooth speaker. It’s in the name! But many Bluetooth speakers support USB flash drives, SD cards, and cell phone USB inputs. The Aura Studio 3 gives you only two options: Bluetooth and 3.5mm. If your phone or MP3 player supports 3.5mm cords, you can still use them. You can also use most modern stereo systems. On the other hand, you won’t be able to use less traditional audio sources.

The Aura Studio 3’s Bluetooth connection is very secure and stable. It utilizes the Bluetooth 4.2 protocol, which ensures both low latency and high bitrates. Because of the low latency, you can use it to watch movies, and the audio will be in sync with the video. The range of the signal is 33 feet. For ordinary, everyday indoor use, this should be more than sufficient. 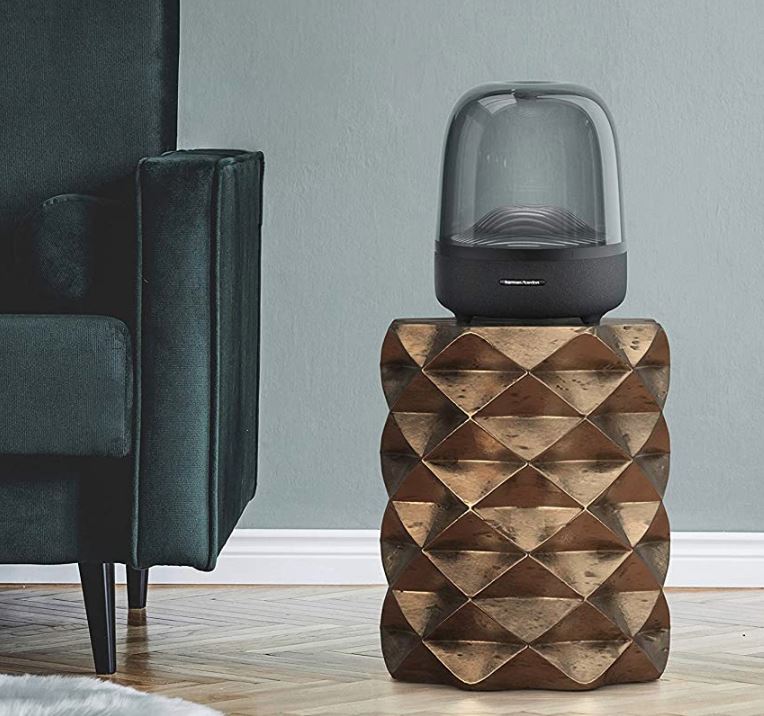 What the Aura Studio 3 lacks in connection options, it more than makes up for in sound quality. To begin with, this is a true 360-degree speaker. It projects sound throughout the room, and does so evenly on all sides. Obviously, this isn’t a significant benefit if the speaker is positioned on a shelf or entertainment center. But if it’s on a table in the middle of the room, it will fill the room from corner to corner without any issues.

This feature is accentuated by the Aura Studio 3’s capacity for very high volumes. In fact, it can produce clear, distortion-free sound at volumes as high as 100dB. This is very loud for a mid-sized Bluetooth speaker. You can easily hear 100dB music on the other end of the house, even if the house is fairly loud. For most people, you’re never going to actually want to use the maximum volume. But that’s a good thing. You can crank up the volume enough for just about any purpose, and not have to worry about audio quality. 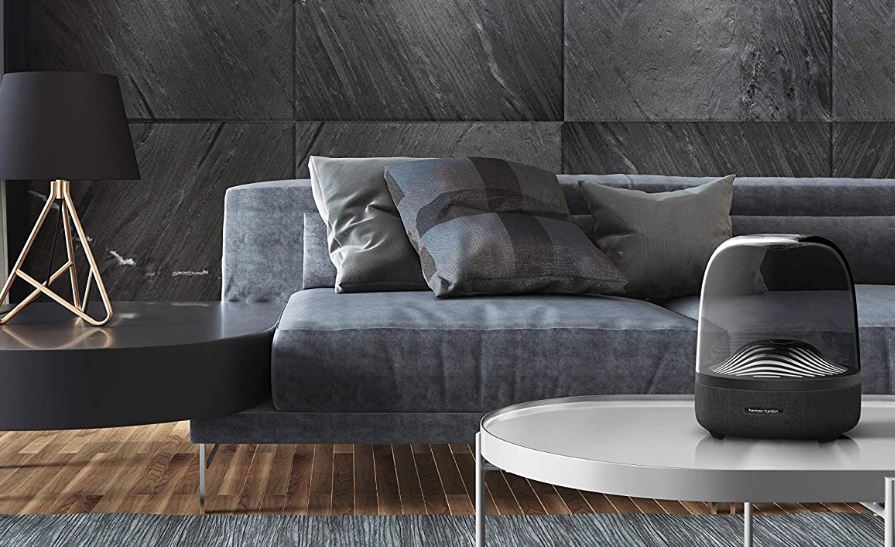 Another defining feature of the Aura Studio 3’s sound quality is the clarity across all frequencies. Highs are clean and clear, whether you’re listening to strings, cymbals, or synths. Mids are similarly clear, without any distortion or crossover from the highs and the bass. Finally, the bass is also very clear. It’s also well-equalized. If you’re listening to dance music or metal, you’re going to feel the thumb of the bass. This sets the Aura Studio 3 a cut above some other Bluetooth speakers, which still sound a bit hollow. The soundstage is also very wide. There’s plenty of separation between all frequencies, without any crossover or interference. 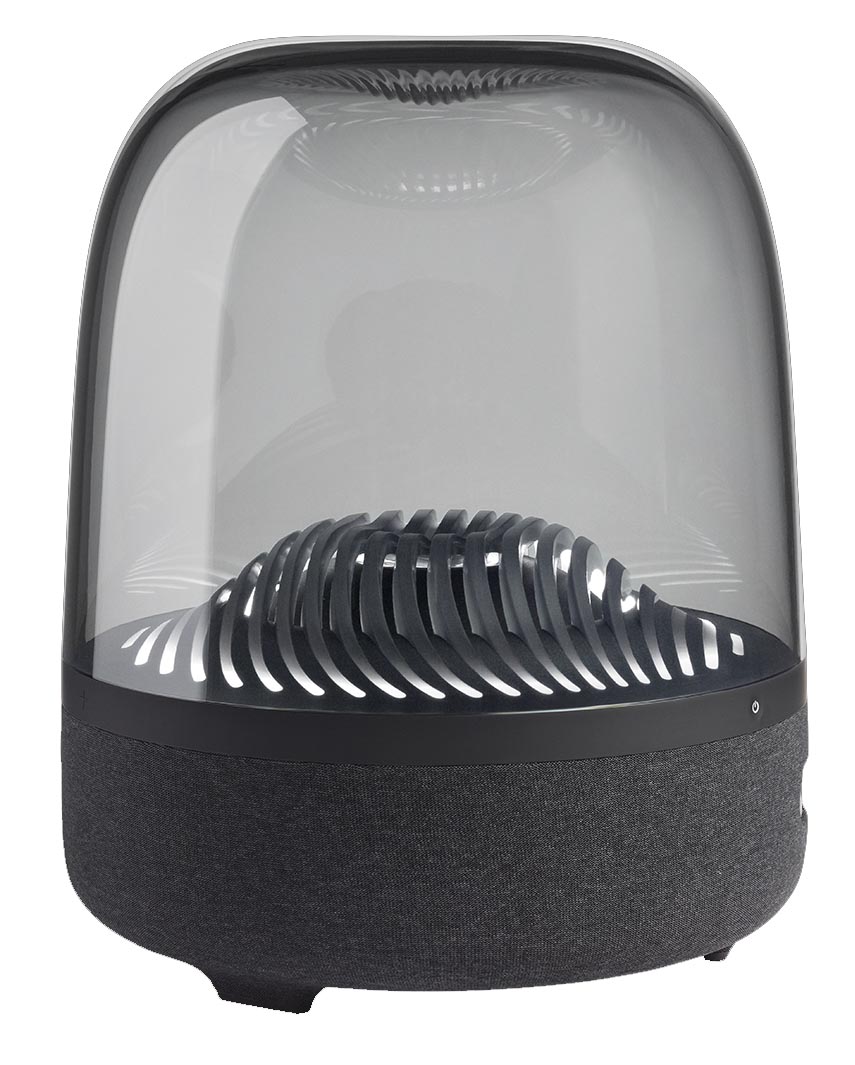 The Harman Kardon Aura Studio 3 is a bit of a unique animal. This is obvious from the moment you open the box. It just doesn’t look like your typical Bluetooth speaker. If it’s turned off, your friends might even ask you what it is. But the LED lighting makes it an attractive accent for just about any room. Whether you’re relaxing to Beethoven or playing Cardi B at a party, the lights will compliment the music. Not only that, but the bottom-heavy design ensures that the speaker won’t easily get knocked over.

The connection and power options are some of the Aura Studio 3’s weakest points. Without a battery, you’re limited to corded power only. And without USB support, you won’t be able to play music from a flash drive. That said, most people buy a Bluetooth speaker because they want Bluetooth. The Aura Studio 3 performs marvelously in that regard. Moreover, the sound quality is some of the best on the market. It’s very powerful, with enough volume potential to knock your socks off. Not only that, but it performs well at all frequencies, so it’s suitable for any genre of music.