Whether at home or in a business, backflow is serious trouble for any plumbing system. Your family and your customers rely on your water to be safe to drink. If contaminated water is getting sucked back into the plumbing, that’s a serious problem. This can happen due to a variety of causes, from excessive back-pressure to backflow siphonage. Hydrants, sprinkler systems, and other high-usage applications are most likely to cause backflow. Other common causes include pressure changes due to frozen pipes and water main breaks. Basically, any time there’s a major change in water pressure, there’s some risk of backflow.

We’ve reviewed commercial testing equipment in the past, including megohmmeter insulation resistance testers. Now, we’re going to review the three best backflow preventer test kits on today’s market. First, we’ll look at the Buffalo TK9S. This is a three-valve kit that comes with a six-year manufacturer’s warranty. Next, we’ll review the Bac-Flo-3. This is another three-valve kit, but with five-foot hoses and replaceable sediment filters. Last, we’ll check out the Mid-West 835. This is a five-valve kit for larger, more complex backflow preventer. Let’s take a look at all three of our options, and see how they stack up to the competition!

What is Backflow Testing?

To understand backflow testing, we first need to understand how backflow happens. Backflow is when the water in a plumbing system flows in the wrong direction. This can potentially introduce used water into the potable water supply. If that water has been contaminated with germs, waste, or chemicals, it can poison people or make them sick. This is why backflow prevention is so important. Backflow happens for two main reasons: backsiphonage and backpressure. Here’s a quick explanation of each.

Backsiphonage happens when there’s a drop in water pressure on the supply side of a system. Water wants to reach a place of equilibrium, and will start to flow backwards through the system to equalize. A good example is if there’s a water main break in the neighborhood. Suddenly, local homes and businesses will lose pressure. If there’s a restaurant without a proper backflow preventer, dirty wash water can get sucked into the water supply. Backsiphonage can also happen at home. This sometimes happens with garden hoses, which can suck up dirt, compost, and fertilizer. None of those are things you want in your drinking water.

Backpressure happens for the opposite reason: water pressure downstream of a valve or connection is too high. Imagine a neighborhood laundromat. Clean water flows into the laundromat, is used for washing, and flows out a drain pipe. As long as the water pressure upstream is higher than the downstream pressure, the water flows through just fine. Now, imagine the lint filter on one of the washers fails, and lint clogs the drain pipe. Suddenly there will be a ton of pressure on that end. Without a backflow preventer, dirty water will start flowing backwards into the water main.

Like any other equipment, backflow preventers can fail. To make sure they’re functioning properly, they need to be tested from time to time. Thankfully, the testing process is relatively simple. You connect a tester to special valves on the backflow prevention device. The valves are then opened and closed, and you read the pressure gauge. As long as the pressure readings check out, you’re good to go. If they’re not, repairs are not typically too difficult.

How do Backflow Preventers Work?

There are many ways to design a backflow preventer, and as many configurations as their are models. That said, they can be sorted into four broad categories. These are Pressure Vacuum Breakers (PVB), spill-resistant PVBs, Double Check Valve assemblies (DCVA), and Reduced Pressure Zone (RPZ). Here’s how each concept works.

Pressure Vacuum Breakers are one of the more common types, because they’re relatively simple. They’re also more affordable than most other designs, and cheaper and easier to maintain. They consist of inlet and outlet shutoff valves, along with a simple spring-loaded check valve. Behind the check valve, there’s a small air inlet valve. This valve will open when the pressure inside the PVB is higher than the upstream pressure. Essentially, instead of dirty water getting sucked upstream, the pipe will just suck in air instead. Because of this simple, reliable design, PVBs are suited for even high-hazard applications.

That said, PVBs’ design leaves them with a couple of limitations. In order to function, they need to be installed higher than any of the downstream plumbing system. So if your piping is high up, your PVB will also need to be high up. They also need to be installed vertically. This can save square footage, but it makes underground use difficult. Their other main limitation is that they’re only effective against backsiphonage. They won’t do anything to prevent backflow caused by backpressure. As a result, they’re not suitable for applications where backpressure is a concern. Finally, PVBs won’t protect against chemigation backflow.

Double check valve assemblies are better suited for in-line applications. This means the valve is parallel to the pipe, rather than vertical. There are no restrictions on placement, provided you have about a foot of clearance underneath for maintenance.

A DCVA uses a pair of independent spring-loaded check valves to prevent backflow. The use of double valves provides redundancy in the event that one should fail. Because of this design, DCVAs can be used to protect against both backsiphonage and backpressure. That said, their spring-loaded design makes them slightly less reliable than PVBs, so they’re only suitable for low-hazard applications. They also can’t be used to prevent chemigation backflow. That said, they’re relatively affordable and easy to install.

Reduced Pressure Zone assemblies are the most complicated and expensive type of backflow preventer. They cost more both to install and maintain. However, they’re by far the most reliable and effective variety. The heart of the design is similar at first glance to a DCVA preventer. You have an inflow and an outflow valve, along with two independent check valves in-between. However, between the check valves, there’s an additional pressure differential release valve. This is paired with a second, independent relief valve to maintain low pressure between the check valves.

RPZ preventers typically must be installed horizontally. However, some are specially designed for vertical use. They can prevent chemigation backflow, the only type of backflow preventer that works for this application. In addition, they can protect against both backsiphonage and backpressure. And because they’re so reliable, they can be used for high-hazard applications. 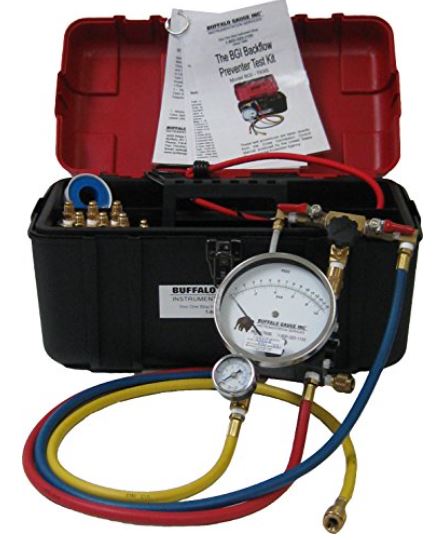 The Buffalo TK9S is a three-valve test kit that’s suitable for PVB, DCVA, and RPZ systems. The hoses are three feet long, and are colored blue, red, and yellow so they can be easily distinguished. All are connected to a central valve and gauge, with an easy-to-read layout. It shows you PSI differential from 0 to 15, as well as overall pressure from 0 to 105kPa. The aluminum housing is quite rugged, and is designed to withstand a pressure of up to 250 PSI. 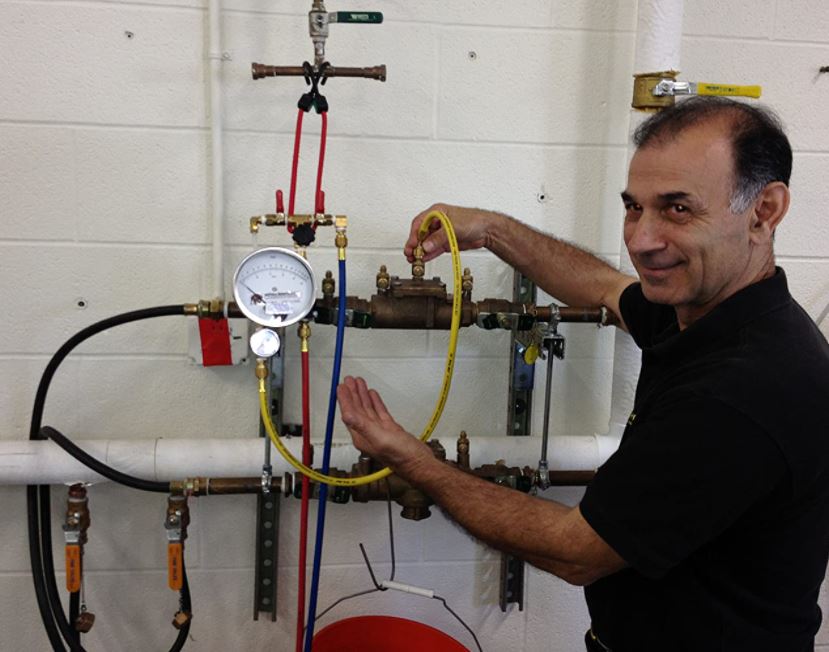 Along with the tester itself, there are a few useful accessories in the kit. First, there’s a set of adapters from ¼ to ¾ inches in size. There’s also a bungee harness to support the gauge while it’s in use, along with teflon tape for the adapters. Perhaps the best “accessory” is the traceable NIST certification, which is good for one year. All of this comes in a rugged tool box, and is protected by an impressive six-year manufacturer’s warranty. 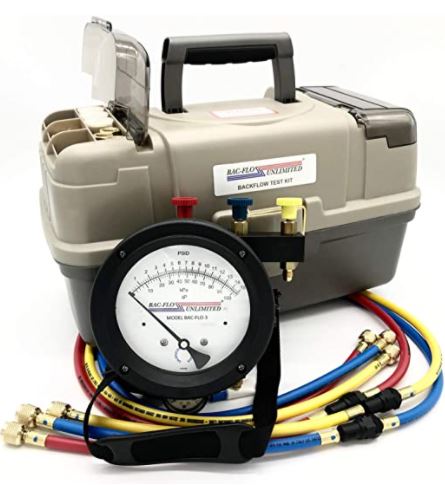 The Bac-Flo-3 is a three-valve test kit from Bac-Flo, a respected manufacturer of both backflow preventers and testers. It has a similar design to the TK9S, with a near-identical gauge that shows the same readings. That said, the tester valves themselves have filters inside, which prevent sediment from clogging up the kit. These filters are removable, and are easy to replace. In addition to that, the color-coded hoses are a bit longer than those on the TK9S. At five feet, they can be stretched to accommodate even very large backflow prevention devices. On the downside, the maximum pressure is “only” 200 PSI.

Along with the tester itself, the kit includes a handful of extras. There’s a full set of brass adapters, ranging from ¼ to ¾ of an inch in size. There are waterproof, laminated testing instructions. There’s even a calibration certificate dated from your date of purchase. All of this comes in a tough plastic tote with a large, comfortable handle. 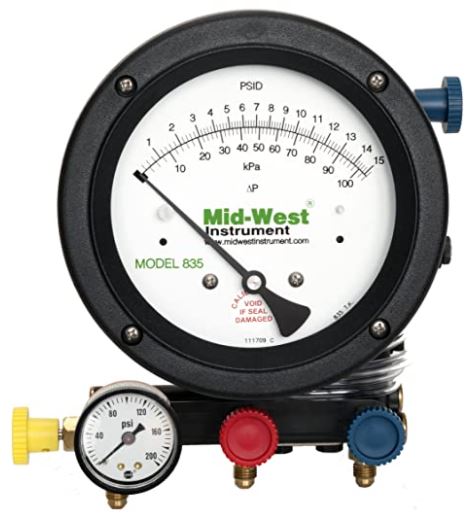 The Mid-West 835 is the most versatile of all the test kits we looked at. With three, five-foot color coded hoses, a three-valve gauge, and two additional valves, it has everything. It comes in a molded plastic carrying case that does a good job of keeping the gauge protected. Like the Bac-Flo-3, this case includes a set of laminated instructions for different backflow preventer types. The gauge even mounts in the case in such a way that you can perform testing without taking it out.

The valves are all very high quality needle valves, with replaceable valve seats. They’re protected by fine, 90-micron filters that prevent virtually all scaling. These filters can be cleaned as well as replaced, so you don’t necessarily have to buy new ones. The valves are rated for 200 PSI, and the whole kit is covered by a five-year warranty.

As you can see, these three testers have a lot in common. They all use the same nearly-identical gauge, and they all come in a case with a set of adapters. That said, there are a couple of minor differences that are worth taking note of. We started off our list with the Buffalo TK9S. The TK95 has the longest warranty of the bunch, at six years. It’s also surprisingly tough for an inexpensive test kit, with a maximum pressure of 250 PSI. That said, the lack of filters means you’ll have to clean the tester itself more frequently. Moreover, it only has three valves.

The Bac-Flo-3 is a bit more lightweight, with a 200 PSI maximum pressure. That said, has built-in replaceable filters to keep sediment from building up. It also has a longer set of hoses, so it can be used on a wider variety of backflow preventers. It’s still a three-valve kit, though, and won’t work on four or five-valve preventers.

Finally, we looked at the Mid-West 835. This large, five-valve kit can work with the widest variety of preventers. The 90-micron filters are both replaceable and washable, which makes a big difference in operating costs. The 200 PSI rating might not be as high as the TK9S, but it’s very good. And the five-year warranty provides some guarantee of good quality.