When you’re selecting a HOTAS flight stick, you’re generally looking to get two things. Greater degrees of control and immersion. A great flight stick can really help you feel like you’re flying the aircraft in your sim. Both immersion and control are intermixed, with one factor affecting the other.

Whether or not you believe the hype, the HORI Ace Combat 7 is supposed to be among the most realistic and fierce air combat experiences created to date. With development spanning about half of a decade, a quick glance at the game is exciting for any fan of the Ace Combat series. Whether or not you’re a fan of the series specifically, it’s always nice to see great flight sims made more accessible to consoles. 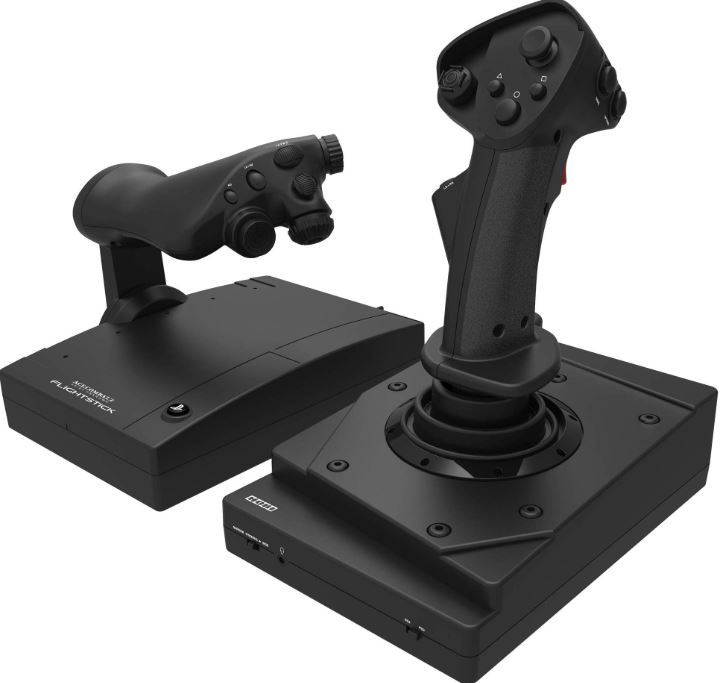 Unfortunately, buying game peripherals can be tricky when you don’t know the brand. There is a great deal of cheap junk sold in the space of game accessories, especially among off-brand products. In that regard, HORI is like a diamond in the rough.

They’re specialized in making licensed video game accessories, and have been making quality flight sticks for quite some time. And HORI gets their products licensed by Microsoft, Sony, BANDAI, and NAMCO. Having those brand partnerships helps ensure some level of quality out of the gate.

In the case of the Ace Combat 7 HOTAS Flight Stick, HORI trying to bring accessible and reasonably detailed flight simulation to consoles like the PlayStation 4 and Xbox One. Players on the PC platform tend to have grave advantages over console players, but a good HOTAS flight stick can level the playing field.

HOTAS flight sticks are almost always broken into two separate parts, the joystick and the throttle. Used in conjunction, they allow you to tilt the axis, pitch, or otherwise adjust your aircraft. Each console uses a thick base that’s about 1” thick. And each weighs about three pounds in total. 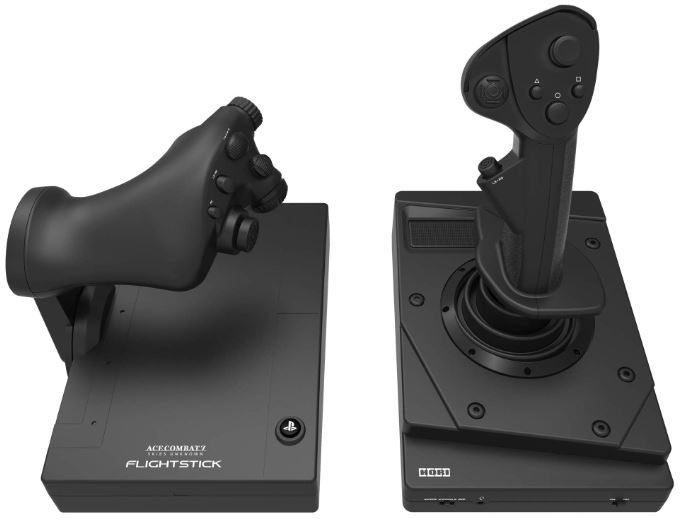 That slightly weighty design has a low-center of gravity, which allows both controllers to remain firmly in place during use. The front side of the right controller also has an audio jack, which allows you to connect your headset and maintain team communication.

The external chassis of both the stick and throttle are composed of ABS plastic, which is the same material used to make most mainstream game controllers. It’s a relatively inexpensive and sturdy material that’s good at dissipating heat and resisting scratches. Though over hundreds of hours of use, these controllers will begin to develop the glossy shine and oily texture of polished ABS plastic.

There are several things to like about the design. It’s been ergonomically adapted, allowing it to be comfortable to use, even over lengthy periods of time. The comfort of both the stick and throttle partially depend on how you set things up, including the angle from which you’re using the throttle. But provided that you don’t go out of your way to use an awkward setup, you’ll find the HORI Ace Combat 7 HOTAS Flight Stick is quite comfortable.

Like with most flight sticks, this is a right handed load-out. The left controller is the throttle, intended to be used by your left hand. Where your hand makes contact with the throttle, you’ll find about half-a-dozen fairly standard control buttons. The right controller is the joystick, with its top half providing another half-a-dozen standard control buttons. 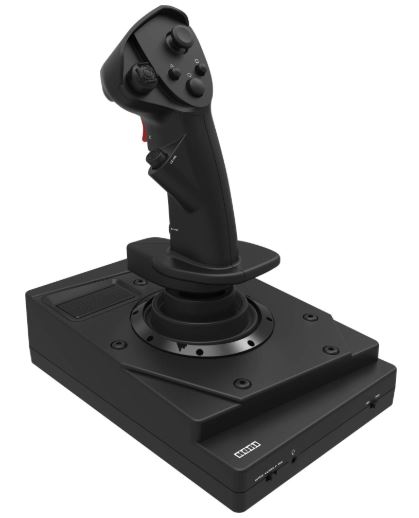 Placing the stick in your hand, you immediately get the sense it’s well constructed. The throttle provides smooth feedback as you adjust it, and the joystick rolls nicely with contact. The buttons themselves are pretty standard for a HOTAS setup, including triggers, automatic fire switches, and so forth. Each trigger response smoothly as you apply pressure, and mechanically kicks back into place.

Compared to previous Ace Combat flight sticks, you may notice control buttons are either unlabeled, or loosely labeled. On some of the earliest HORI flight sticks, the D-PAD was literally labeled D-PAD1. That might make it slightly easier to get started using the equipment. But after you’ve used the flight stick for more than ten seconds, you generally know where everything is located.

The HORI Ace Combat 7 eliminated many of these labels, which aesthetically resulted in a flight stick that’s a lot truer to character. Though it hasn’t left every button unlabeled, it comes quite close. And that helps make both controllers feel less like console controllers and more like flight equipment. 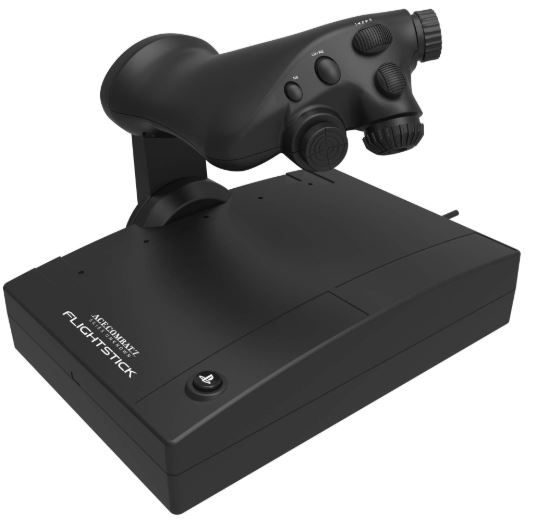 Though you do not have the same customization ability as PC players, with the right controller, it can come close. The HORI Ace Combat 7 HOTAS Flight Stick has full support across the PS4 and Xbox One consoles. That leaves the range of adjustability in the hands of game developers more than anything else.

With that said, between its two controllers, the Ace Combat 7 HOTAS provides an almost redundant degree of control options. The joystick sensitivity is adjustable, and the throttle resistance is adjustable. That allows for fairly precise control, and ultimately a more realistic flight simulation experience. And it’s these kind of levels of customization that really separate a good flight stick from a great one.

The design of the HORI Ace Combat 7 HOTAS Flight Stick is loosely modeled after actual aircraft controls. The idea is to recreate some of the realism and excitement of flying an aircraft while playing a sim. But having a proper flight stick actually gives you far more than just that. You can feel it in the difference between trying to take-off by using the button on a console controller, or using a throttle and stick.

A console controller can help you take off. Perhaps it has pressure-sensitive buttons. You might be able to slightly squeeze those buttons, and scarcely work out enough control to scrape by through a flight sim. You could also try playing blindfolded. But after you’ve played a few rounds with a decent flight stick, it can be tough to go back to inferior control layouts. Because any decent stick like the HORI Ace Combat 7 HOTAS Flight Stick provides definitive advantages over your competition.

With respect to immersion, both controllers use haptic feedback, allowing them to shakes and rumble with intensity that’s slightly greater than the rumbling of a typical PS4/Xbox One controller. When your craft is struck and a piece of the wing is torn away, vibration can be a nice touch to add to the experience. 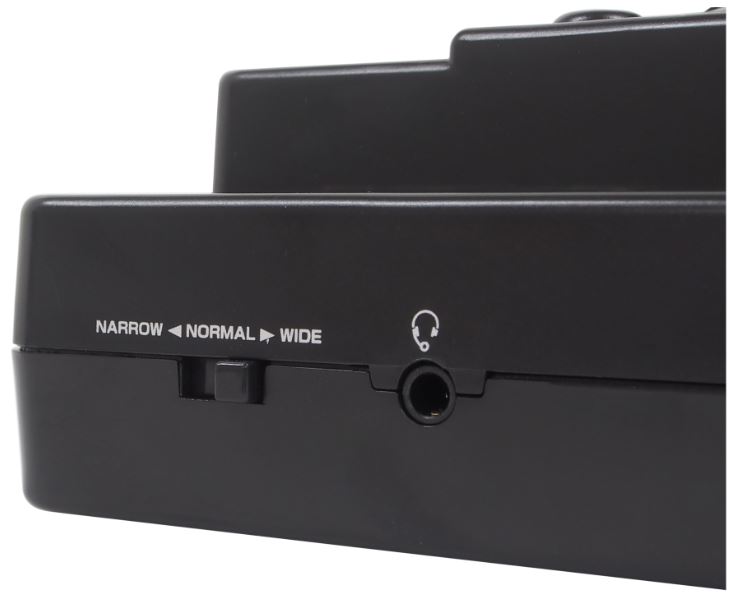 The HORI Ace Combat 7 HOTAS Flight Stick is specifically for PlayStation 4 and Xbox One. Though a little technical wizardry would be all it takes to get this stick to work in a PC, vibrational controls would not work because they’re part of the PS4 infrastructure.

If the name didn’t give it away, the HORI Ace Combat 7 also enjoys full compatibility with the upcoming Ace Combat 7. It’s been almost specifically designed for Ace Combat games, though there are quite a few great flight sims on the PS4 that are also compatible. 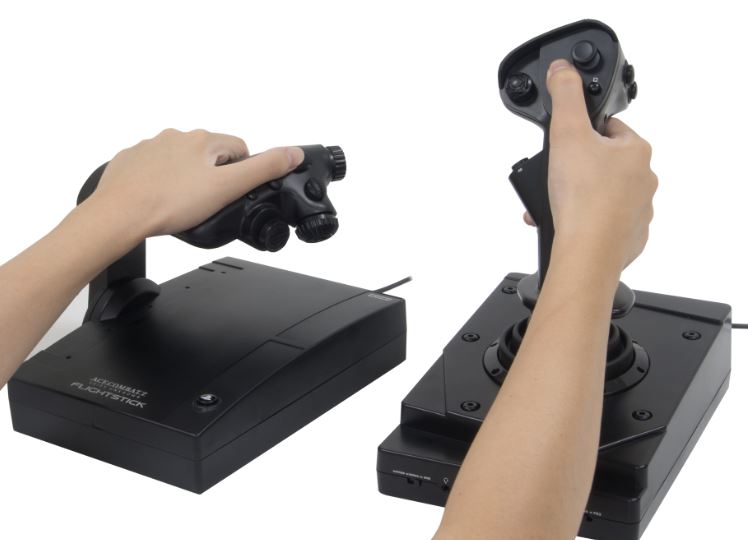 Who Should Choose the HORI Ace Combat 7 HOTAS Flight Stick?

For the absolute best flight simulation equipment on the market, you still need to turn to PC gaming. Within PC gaming flight sims, you’ll find flight sim equipment options which are only a few steps short of recreating an actual aircraft cockpit. But relative to consoles, the HORI Ace Combat 7 HOTAS Flight Stick is phenomenal in almost every regard.

People who love flight sims have no shortage of options for Flight Stick controllers. If you’ve got a bottomless budget, you can setup a play-cockpit that’s almost exactly like flying the real thing. It is a bit more challenging to find great HOTAS layouts for the PS4/Xbox One, but the HORI Ace Combat 7 HOTAS Flight Stick is definitely among a short list of greats.

People who take flight sims exceptionally seriously will intuitively understand the HORI Ace Combat 7 is not technically a top-shelf controller. The very best sim controllers on the market use heavily mechanical constructions that make huge efforts to carefully emulate the feeling of using an aircraft.

But the HORI Ace Combat 7 comes fairly close to those levels of performance. And it does so at a fraction of the cost. Both the stick and throttle are high quality controllers, each capable of delivering exactly what aviation fans want from this kind of equipment. From a purely physical standpoint, there’s nothing about this setup that feels cheap. And that makes it a good choice for gamers and hobbyists alike.