Gaming earbuds are pretty close to ordinary earbuds, with only a few exceptions. Because gaming earbuds tend to be made for two things. The first is to help make your games sound more immersive. The second thing is to bolster clarity, especially among headsets aimed at gamers who are playing multiplayer titles with microphones. In other words, the two most important factors for picking a headset for the average gamer.

The Nintendo Switch Gaming Earbuds Pro are one of the latest releases from HORI. And while as a brand, HORI tends to focus itself fairly strictly on gaming peripherals, it’s not unusual for them to enter the audio space. It’s not like they’re without experience coming into this project. On the contrary, they’ve made at least a couple of decent headsets before. 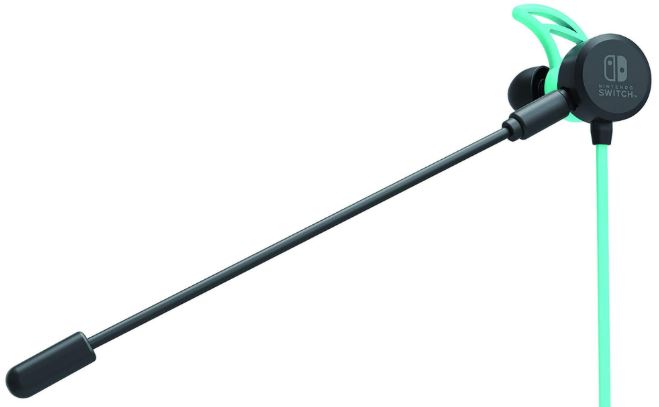 And their earbuds have at least a couple of unique things to offer. For starters, they’re designed to be used specifically for gamers. That includes a soundscape that was made aimed at supporting audio from the Switch. But that support continues on through the microphone, as we’ll dig into a little more later on.

Another big thing that comes up with gaming peripherals is compatibility. After you integrate a microphone, your headphones don’t necessarily have to work with your gaming consoles. But as is often the case with HORI products, you don’t have to worry about that with these earbuds. HORI tends to get their stuff certified for the console for which their components are intended to be used on, and includes their Gaming Earbuds Pro.

Aesthetically speaking, the Gaming Earbuds Pro earbuds are quite distinct. One wire is bright red while the other is sky blue, a uniquely Nintendo-feeling kind of gaming aesthetic. It really helps emphasize the design and orientation of these earbuds. And whether or not you end up using them outside of your console, they certainly make sense paired up with a Switch. 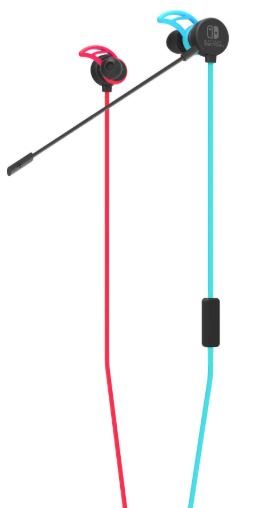 The end of the cable terminates in one red 3.5mm jack, and one black 3.5mm jack. Those are used to direct the audio input and microphone output. Since they’re color coordinated, it’s pretty easy to figure out which end goes where. Things get a little more involved when you notice there’s an in-line remote, a small box that’s about six inches down from the right ear-bud. That control center allows you to manage the volume, and initiate muting.

But no small part of what makes these earbuds special is the inclusion of support for the Nintendo Switch Online App. Inside that app, you can access a mixer. The app is a core part of these earbuds because even though these buds are supposed to provide two things, entertainment audio and gaming audio, they’re really only good at doing one thing at a time.

For people who really want to give the bass a little extra boost to make their games a little more immersive, the app can let you change the soundstage as you see fit. And for people who value clarity above all else, which could be the case for people who are mostly interested in multiplayer games, that makes the app good for creating a more neutral soundstage.

Perhaps you’re someone who wants to stay more hands-off, and you don’t see yourself sitting there and micromanaging the app on a regular basis. In that case there are also some presets you can choose between. But more on that later.

Most impressively, HORI decided to include both an in-line microphone, and a separate detachable microphone that can be added to the blue side of the earbuds. The microphone you can add rests on the end of an extended 6” wire that can be bent or adjusted to better accommodate positioning in front of your face.

What’s the difference between these two microphones? Well, it really has to do with what you consider passable audio. In a lot of environments, a microphone positioned near your ear is going to work just fine. Especially if you don’t have to worry much about ambient noise, or if clarity isn’t going to be a huge issue because you’re not playing an enormously loud game.

But there are other circumstances where it makes sense to move to the second mic. Being able to position that microphone in front of your face makes it much easier to pick-up on the things that you’re saying. In either case, having options is almost always a good thing. Even if you ended up losing the extended mic, you wouldn’t be totally out of luck.

Notably, these earbuds make use of in-ear fins in order to help secure the earbuds inside your ears. To some people, that might seem like a strange design decision. Why? Because ear-fins tend to be something you use with athletic earbuds, where you’re doing vigorous exercise or high levels of motion and activity. And that’s not exactly what comes to mind when you start to think about playing the Switch. 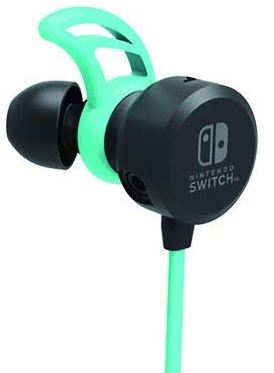 Even if you start to account for things like motion controls, those controls usually aren’t so interactive that you’re at risk of earbuds slipping out of your ear. And the reason why HORI went with ear-fins mostly has to do with comfort. The silicone ear-tips they’ve selected do not have to penetrate your ear canal in order to stay inside your ear. They just push up against the entrance of your ear.

There are several big advantages to that design. One is that sizing for ear-tips is less important. Another is that noise isolation goes up. And naturally, comfort improves because you don’t need as much force to be used pushing against your ear canal. That’s especially good for the kind of long-term comfort that gamers might be looking for.

Because let’s face it, when it comes to long-term comfort, earbuds tend to be the worst kind of headphones. Especially when they use a design that penetrate inside your ear canal. But for what they are, these HORI earbuds do manage to maintain comfort for a surprisingly long amount of time. There are three sizes of ear-tips included, which is a pretty standard array for earbuds like these.

Because these earbuds connect with red/black connection terminals, you don’t have to think about wireless connectivity between them. You also don’t have to think about a battery lifespan. And that’s a good thing. Because even though it’s not necessarily a terrible idea to use wireless peripherals for gaming, especially on a wireless friendly console like the switch, it can still be a bad idea in general. This way, you don’t have to worry about the batteries eventually needing to be recharged, or eventually breaking after a few years of use. 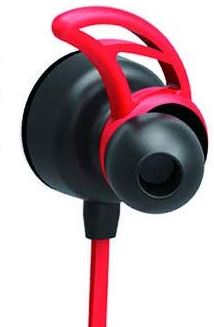 Earbuds are almost always going to have some pretty mundane limitations. Especially if you’re not spending hundreds to get some kind of multi-driver setup. You can’t expect the sort of booming bass you’d be able to get from larger 50mm over-ear headphones. The soundstage of a 6mm audio driver just isn’t going to compare to the soundstage of drivers that are almost ten times larger.

However, the inclusion of their app makes it possible to push these headphones into a direction that makes them sound great for whatever you might be trying to listen to. You can take them out of the box, connect them, and never actually interact with the app if you want. They still sound pretty good, fresh out of the box, though they’re tuned more to clarity than anything else at first.

Without making any adjustments, these earbuds are mostly tuned in the interests of clarity across voice communications. So for people who are looking to make these aimed a little more at music, it might help taking the time to open and explore to app to see what kind of different soundstages you can move between. Though no matter your selection, you’re not going to be able to get some deep, thumping bass out of these small audio drivers. To their credit, the bass section is respectable relative to the earbud format.

Compatibility isn’t a great concern for earbuds. But in this case, HORI has gone out of their way to get a certification from Nintendo for these earbuds. Though that really doesn’t mean that much in relation to earbuds, it tends to mean more when it comes to controllers. But t’s nice to be able to rest easy knowing that your microphones are never going to encounter some kind of compatibility issue.

Who Should Choose the Nintendo Switch Gaming Earbuds Pro with Mixer by HORI?

These earbuds are a little bit niche. Sure, it wouldn’t necessarily look odd for you to be using them outside of the Switch. But they’re not really designed for that. And even though they’ve got the kind of stability you might need for athleticism, you probably would want to hesitate to use them for those kind of activities. Because these earbuds are sweat resistant, but really not designed to endure a downpour.

For people who prioritize communication features, being able to move between two microphones is great. You’ll probably end up using the extended mic more of than not. But being able to pop it off entirely is also very cool. Especially for those who find the earbud mic to be adequate, and don’t need the extension. Though again, having options is great.

Which really allows the Nintendo Switch Gaming Earbuds Pro to appeal to a decently wide audience, at least, within the niche of Switch gamers. Basically anyone who owns a Switch and wants to use earbuds while playing should be able to see some appeal here. It’s only people who cannot make use of the microphones who should be second guessing the selection of these earbuds. Even then, at least they look pretty cool. And it doesn’t hurt they’re pretty cost effective, especially considering they come with a two microphone setup.