Sometimes you need more USB ports than you have available. That’s actually an increasingly common problem. Because from mice to smartphones, just about everything is on the USB format now. Luckily, adding some additional USB ports to your setup is easy. Or at least, it can be. It really depends on whether or not you’re able to find the right hub to help.

It’s not hard to find some decent USB hubs. But as is often the case, some small design decisions can have a big impact on the user experience. Which means it pays to look at the smaller details, especially when it comes to a USB hub. How many cable connections do you plan on using? How often will you need to plug and unplug your cables? Will anyone else be using the hub?

The answer to those questions can often direct your choice in one direction or another. But Orico has actually made things much simpler. Because between 3 similar designs, their transparent USB hub is able to accommodate several distinct kinds of use cases. So no matter who you are or how many connections you need to make, they’ve probably got a hub that can handle what you need.

When it comes to aesthetics, each of the Orico USB hubs are made totally transparent. It’s a cool design for two reasons. One is that it looks pretty high tech, whereas solid plastic hubs will almost invariably look cheap. Another reason is that it’s much harder to dirty or damage this clear plastic chassis. Wear and tear is harder to see due to the transparent nature of the device. But between the three, how do you find the most appropriate one for you?

For starters, the four port version measures 4.82 x 3 x 1.5 inches, and weighs about 3 ounces. Those four ports run in a straight line from top to bottom, making the unit a very simple rectangular shape that’s easy to hide away or shove in your pocket. People who need something simple and sweet are probably going to be drawn to the simplicity of this design. 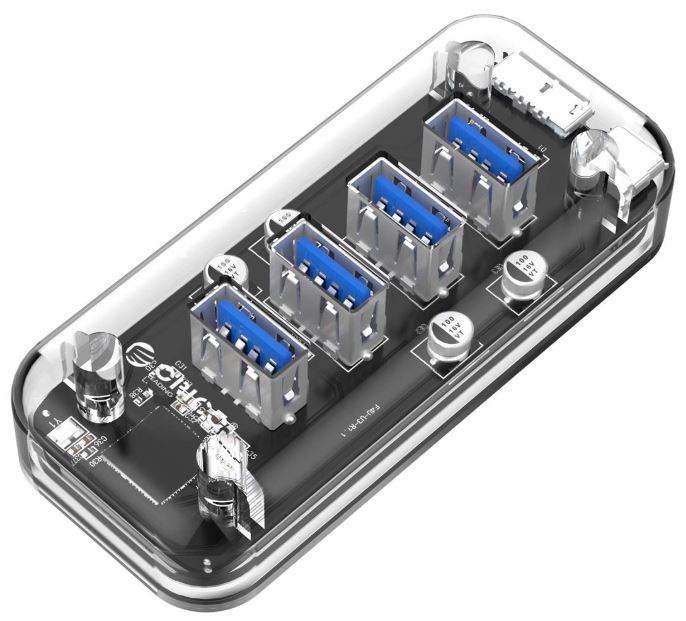 But of course, four ports aren’t going to cut it for everyone. The first seven port version measures 7.28 x 4.33 x 1.38 inches, and weighs much closer to 4 ounces. Plus, it has the ports in a circular arrangement instead of a line, with each running along the edges of the adapter. That makes a lot of sense for an adapter that’s positioned in a stationary place, possibly where several people might want to connect with it. For someone doing lots of plugging and unplugging, this design is pretty smart. 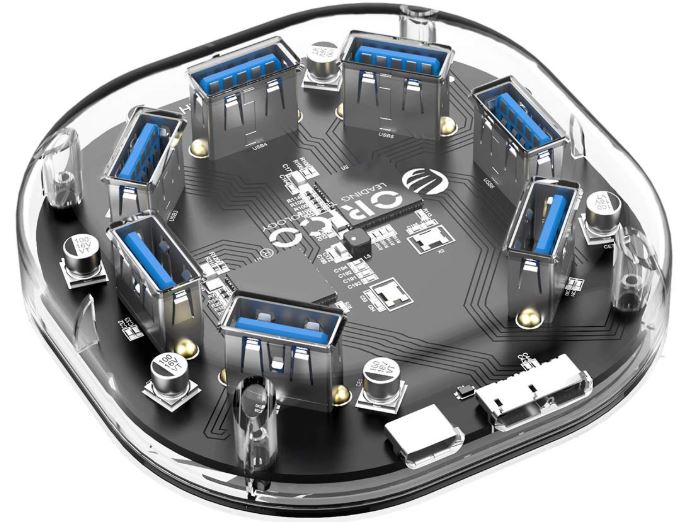 What if you preferred the simpler rectangular design? In that case, you’ll probably like the second 7-port version of this hub. It measures 7.3 x 4.3 x 1.4 inches, and weighs about 5 ounces. Instead of placing the ports in a rounded arrangement, it goes back to a simple rectangle. And that row of seven ports stretches out quite far. For someone who’s doing static placement of cables that won’t see a lot of plugging and unplugging, this design can make a lot of sense. 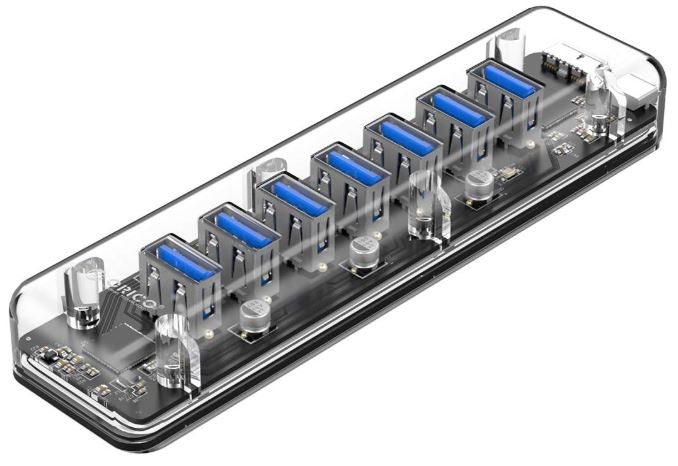 When you have seven ports in a row, it can be difficult to access the middle ports without also removing the devices directly above or below it. Because unplugging more than you want or need to unplug is usually a bad thing, that makes this version a bit less suitable for people who are trying to share the hub with others, or are making repeated connections.

Any solid USB Hub requires the integration of several design elements, the simplest of which is how many ports are onboard the hub. But there are far more concerns than that. You might want to know if the ports can with stand bending forces while lines are connected to them. And you might want to know about how many times each port is supposed to be able to have a connection inserted and removed before it wears down. 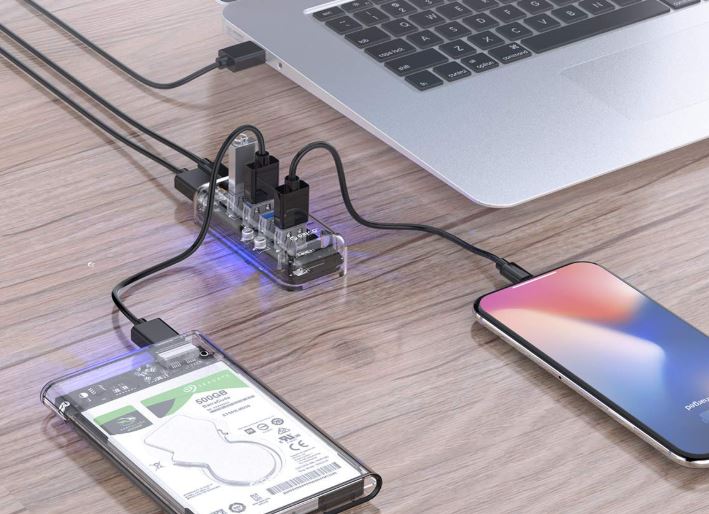 Because even though it sounds a little odd, USB ports are very much capable of wearing out. In order for your USB connections to remain stable, the cable and the USB port need to be able to make a nice firm connection. When the connection is even a little loose, the result can be intermittent connecting and disconnecting, and failure to recognize your devices. You see this mostly in USB drives, that’s when you have to start wiggling them in order to get them recognized on a PC. 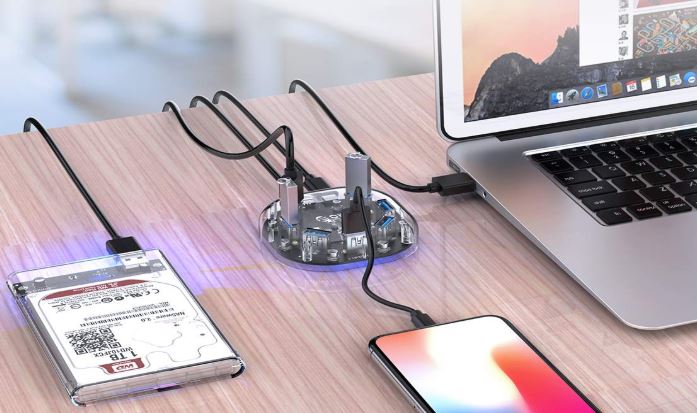 And that’s when you’d have to start thinking about replacing your USB hub or whatever other connections were involved. Because even a USB hub is vulnerable to these kind of wear-and-tear forces. A typical port is made to last for something like 20,000 repeated cycles of entry and removal. And that figure does depend on the quality of the port construction. Though if you’re someone who plugs in some connections to your USB hub, and then never remove them ever again, you can worry less about the general quality of construction. Then you can focus more on the level of USB support being provided, i.e. the format behind each port. 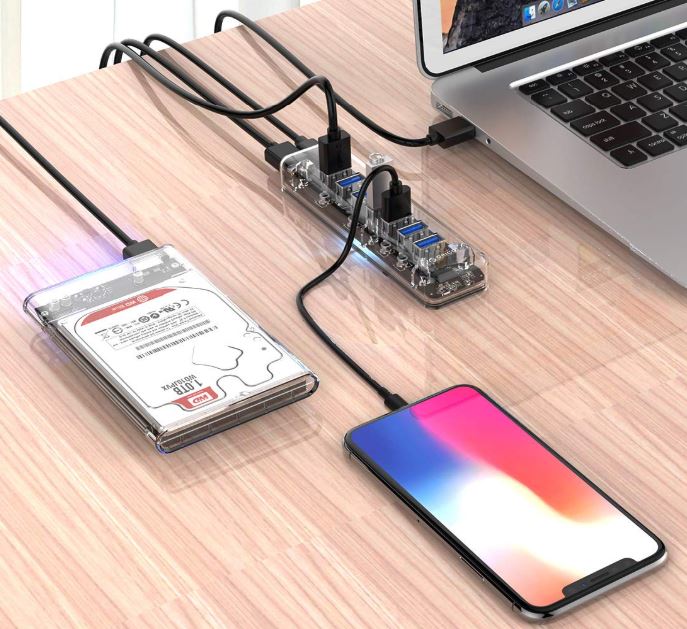 In this instance, you’ll find the Orico Transparent USB 3.0 Hub was designed specifically to anticipate users regularly interacting with the unit. So it’s supposed to be able to withstand tens of thousands of user interactions as a result. Even for someone who plans on plugging in their cables and forgetting about them, being built to a higher standard is usually a good thing.

For port support, you’re looking at four USB 3.0 ports. That means you’re capable of transmitting 5Gbps of data. Which is quite convenient for managing several kinds of peripherals, like a mouse, hard drive, game pad, fan, and so on. And each 3.0 port stays out of the way of the others. So if you have 4 devices connected, you don’t end up with those devices splitting power between all those ports. The 5Gbps data transmission speeds allow you to take full advantage of the USB 3.0 format. 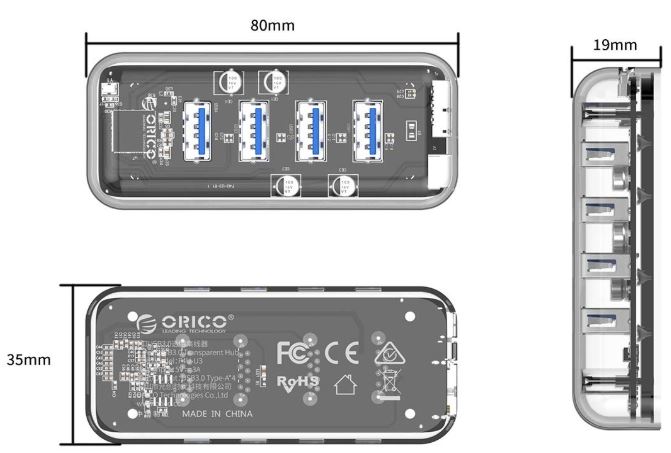 Compared to USB 2.0, the difference is about tenfold faster. Though as is always the case, it’s important to look at the lowest common denominator within your set of USB connections. If you happen to be connecting this adapter to a USB 2.0 interface, then every one of these ports would be reduced to the USB 2.0 format speed.

Inside the transparent chassis, you’ll find a VL817 main control chip. Each hub is powered by this chip to offer a more stable and managed means of charging and powering your devices. So it’s able to determine exactly how much amperage it should deliver to a device that’s trying to recharge, and how to appropriately handle its battery based on the status of the cells. 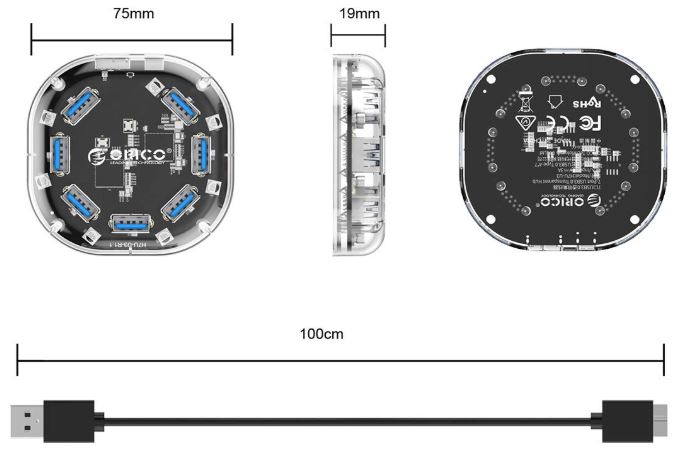 Each ORICO USB hub contains two independent interfaces that are responsible for power supply connections. That means each USB 3.0 port can allow for four the others to be charged at the same time. Though if you’re near-empty on a battery, the smart chip might determine that the best course of action is to finish emptying the battery before recharging from zero. That would be in the interests of the longevity of the battery, not in the interests of speed. Or it might notice you only need to be topped off, and can quickly rush to get that done. 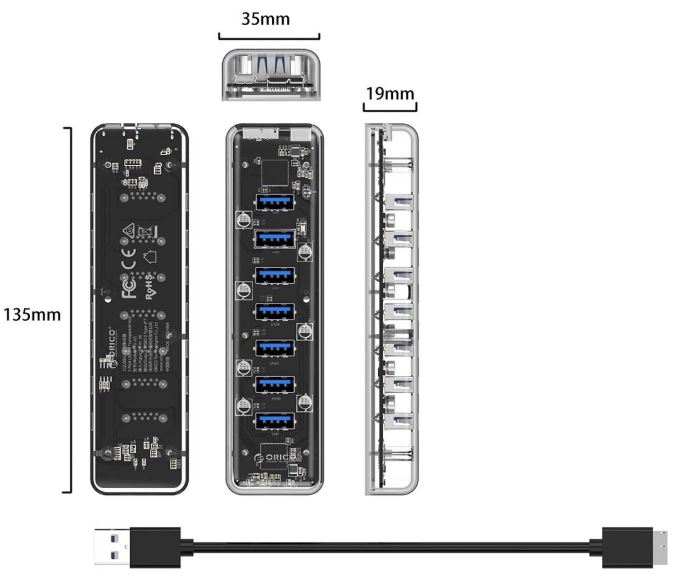 Another thing the transparent chassis does is help light escape from the LEDs on the bottom side of the unit. Those LEDs are there to let you know the hub is working and connected. It’s a simple and quick visual indicator that can prevent you from having to question whether the hub is connected.

You have support for Mac OS, Linux, and Windows. Since these hubs utilize the USB format and nothing else, you don’t actually need to get any drivers or control software to start using the hub. You can pretty much plug it in and start using it on almost any computer where you’d like to add some USB ports.

The Orico Transparent USB 3.0 USB Hub includes one hub, one 3-ft USB cable, and one user guide. They also give you an 18-month warranty and endless tech support. Though you probably won’t need tech support in order to figure out how to connect a USB cable.

Which Orico Transparent USB 3.0 Hub Is Right for Me?

In all cases, these hubs allow you to recharge your devices rather quickly, and to take advantage of the higher speeds made available by USB 3.0. They also offer essentially the same quality of construction, as well as the same cool transparent aesthetic. But ow many USB ports do you need to get your hands on?

If you can manage with four ports, then you probably are better off sticking with the four port version of this hub. This version is also the best for people who are principally concerned with portability, as might be the case for someone who’s using a hub to extend a laptop.

By contrast, the 7-Port round version of the ORICO Hub is going to be a better choice for someone who’s sharing access with others. Or someone who is making repeated connections with their USB cables. Because the circular design makes it so it doesn’t matter how big or small the headers on your USB cables are – you’ll have no trouble connecting or disconnecting wires from this design.

And the 7-Port (New) version that runs in a line will be a better choice for someone who’s got a stationary and static setup. Perhaps you plan on plugging in your PC peripherals, and then almost never touching the hub again. That being the case, this layout will likely be preferential to you.