Recharging your controllers isn’t exactly difficult. But sooner or later you’re going to have to do it, and that can bring on some downtime. Fortunately, there are some ways to get around that downtime and manage your charge without having to go back to a wired connection. Unfortunately, charging systems tend to be pretty hit and miss when it comes to several important elements of design.

The PDP Ultra Slim Charging System will mostly let you know everything that you need to know about it from its name alone. For one thing, this system is quite slim. It’s supposed to be easy to store away, not unlike controllers themselves. That way, there’s a minimal degree of intrusiveness inside your home while the charger is in play. Ensuring that this thing can fit unnoticed atop or adjacent to your Xbox is no small task for a charger like this one. 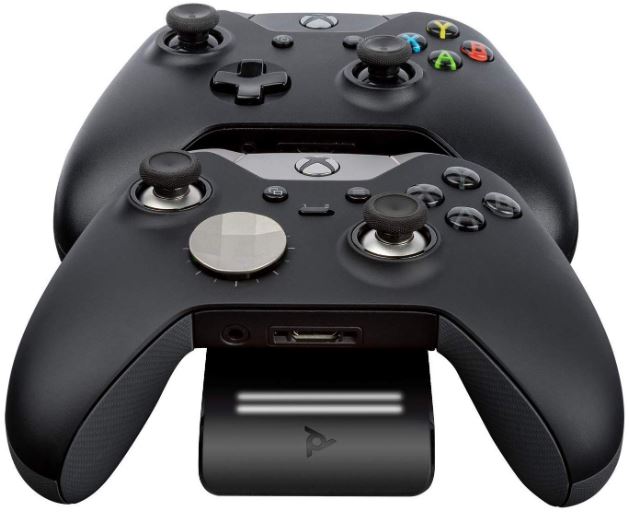 Another thing this system is supposed to help with is a little more transparent — it’s supposed to recharge your stuff. But anytime you’re not using a simple cable adapter, recharging will always be something that requires a higher degree of attention. In this case, you’ll find you need to pay attention to the way in which your controllers actually connect with the charging system.

The PDP Gaming Ultra is available in two separate types. The first type was designed specifically for the Xbox One. The second type was designed specifically for the PS4. Apart from that, they’re identical units, so you don’t have to look for any further differentiation. But you will want to start thinking about the general quality of the charger. 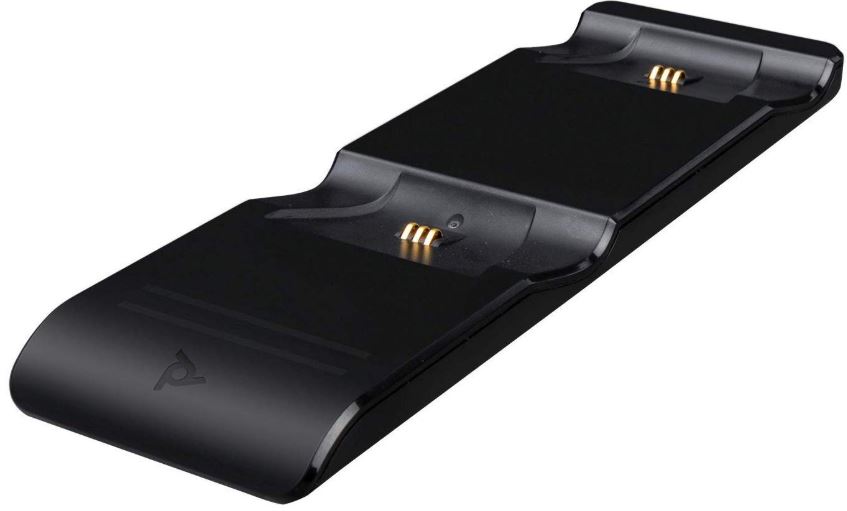 As is often the case with a device like this, whether or not it does a good job is really a matter of getting several small details right. You need to look at the quality of the construction of the chassis, whether or not the charging pins are going to be vulnerable to damage, and so on. And for the most part, this system seems to have been very well thought out. A lot of the common sense stuff is totally taken care of.

For instance, you don’t have to worry about this device being easily broken from a fall, or from someone carelessly slamming their controller on it. Sure, the bland black chassis isn’t going to blow you away with any cool LEDs. And the external shell of the charging system basically looks like a big slab of plastic. But even that is probably a good thing, given that the black blends in with the typical black coloration of the Xbox. 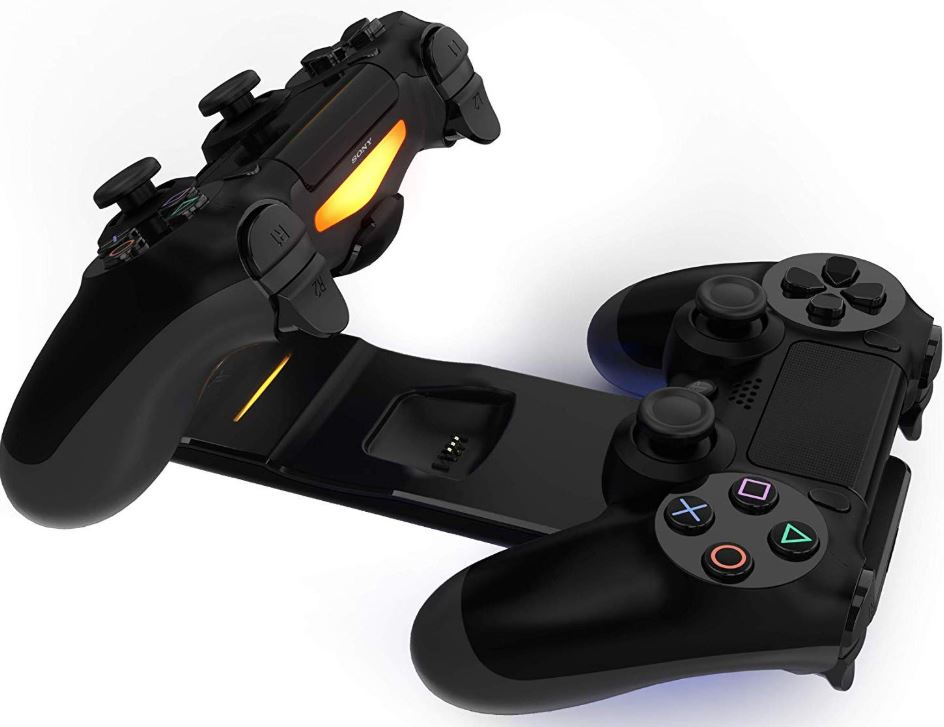 Turning to the bottom, you’ll notice the developer went out of their way to do a lot of things a little better than average. For instance, micro-suction material is used along the bottom of the case to help keep the charging base affixed to the surfaces its placed upon. That way, you don’t have to worry about your controllers sliding around, nor the base sliding when you place controllers.

That sounds like a small thing – but it’s can actually be a big deal. You don’t want your controllers to stop charging because they got nudged in the wrong direction. And that’s something that can happen without a nice firm sticky padding on the bottom of the unit. As it stands, you can give this thing a pretty big bump without having worry about your controller being dismounted from the unit.

The PDP gaming Ultra Slim was designed specifically for the Xbox One or the PS4. That way, the magnetic parts are supposed to have a one handed drop and charge system. So you don’t have to think about whether or not the controller is actually positioned to charge. It is basically fool proof, so you can’t mess it up.

You can tell from just looking at the system, it’s able to accommodate a total of two controllers at one time. That’s also why they’ve included a total of two battery packs. It’s a shame they haven’t made this a four controller system, but it would be trivially difficult to start using two of them for four controllers. Technically speaking, you could still charge four controllers on this system using a rotational system, as well. 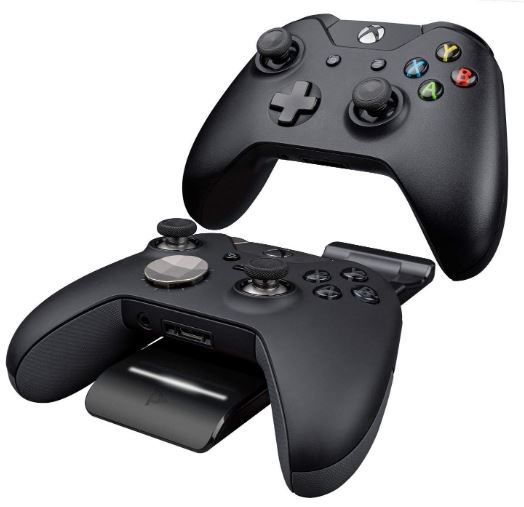 And if something isn’t working, that is also immediately obvious due to the LED indicators. So between those factors, the PDP Gaming Ultra basically removes all the guesswork. Those LEDs will also let you know when you can start playing again. It’s also nice that the LEDs don’t go overboard with their brightness.

When it comes to gaming peripherals, it’s getting increasingly common to throw on a bunch of ultimately pointless LED lights for a sense of ambiance. The PDP Gaming Ultra Slim Charging System doesn’t actually use any pointless LEDs, but they do use dorm informative ones. Ambient light surrounding the base of the charging system can keep you informed about the status of your charge. While recovering battery, the LEDs will breathe in and out.

The use of auto-dim technology allows the charging station to adapt to its own ambient lighting conditions without the need for you to manage it. So if you’re in a dark room and don’t want the lights blinking at you, you don’t need to think twice about it. There’s no switch to manage, the system takes care of everything itself. 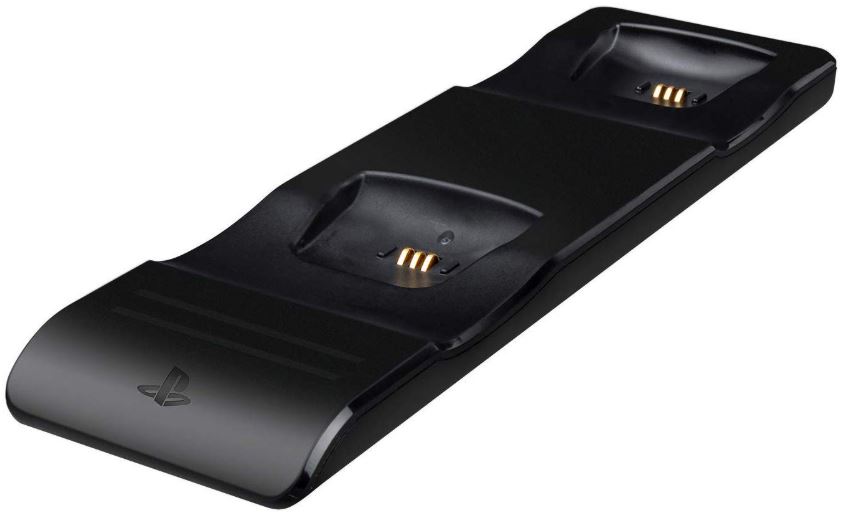 Getting wiped out in a game because your controller dies is pretty horrible. Any loss that isn’t due to you, but is due to some kind of external circumstance, can feel terrible. It doesn’t matter if it’s an internet disruption or hardware failure, it’s a bad time all around. For a lot of people, these kinds of concerns are only becoming more common. Because the increasing popularity of games involving permanent death mechanics, and other games in the so-called rogue-like genre, an ill-timed disconnect can be devastating.

So when it comes to battery capacity, you can expect fairly similar performance to the batteries you’ll find in a typical Xbox wireless controller. In this instance, you’re looking at about 40hrs of power from a full charge. Of course that means you’re also going to end up facing some lengthy recharging times, so it’s beneficial if your controller can get as much time on the pad as possible.

Are you going to pause your game so you can get up and grab a drink? Throw your controller onto the charging system. Those kind of short recharges can actually add up and start padding the already formidable lifespan out even further. In terms of harm to the battery, there’s nothing wrong with small frequent charges. In fact, the battery will likely have a better lifespan if you’re keeping them between 40% and 80% instead of running them very low or totally topped off.

So whether it was by design or not, these batteries are positioned to end up lasting for a very long time. At some point in time, every battery will need replacement, even rechargeable lithium-ion ones. But in this case, you can anticipate around three or four years of heavy use before that might become a concern. That makes the PDP Gaming Ultra Slim Charging System surprisingly cost effective. 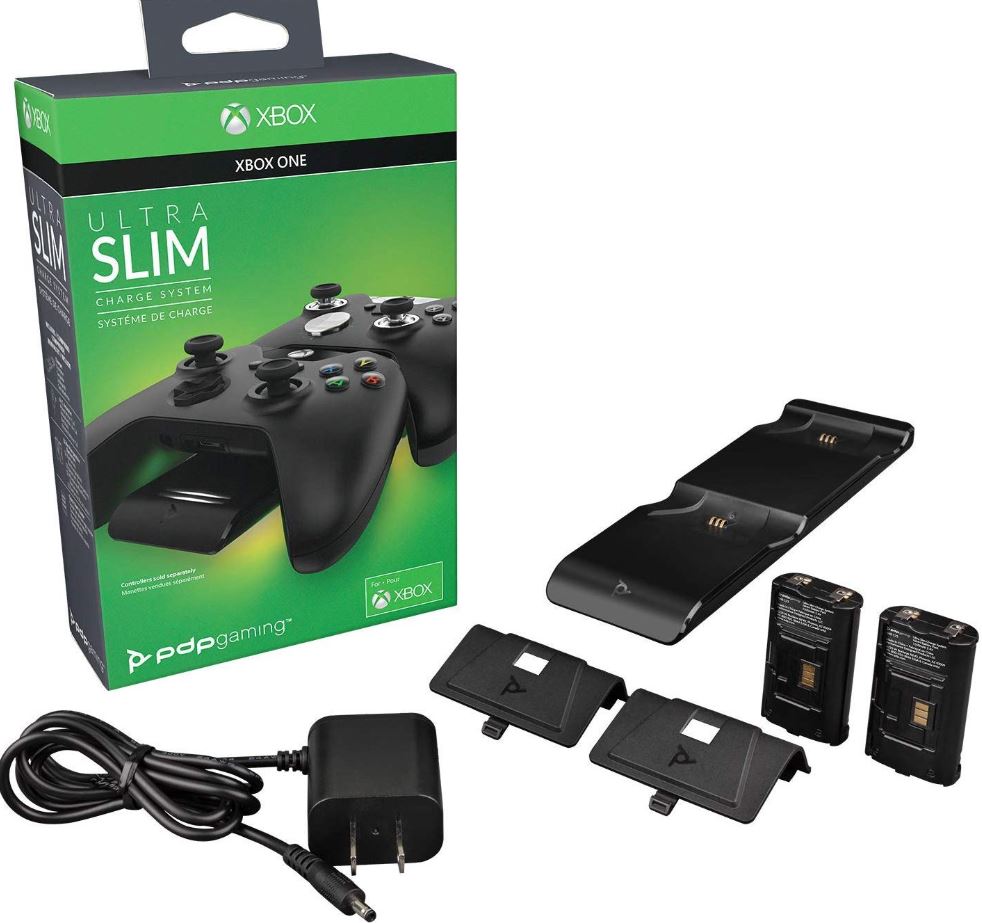 One area where they might have tried to make things better? They could’ve used a stronger battery for the kit. Sure, they’ve gone and matched the typical batteries you see inside PS4 controllers and Xbox One controllers. And sure, the battery being bigger would probably end up having some negative consequences when it comes to comfort.

But having the option to run a larger battery would be pretty cool, and would’ve been very easy to implement as an option for this system. It’s a shame they didn’t go that route. In any case, this kit includes a pair of rechargeable battery packs designed for the Xbox wireless and Elite controllers. The included charging cable is actually a little impressive. The connection head doesn’t take up too much space when placed on an AC socket, so it won’t block other plugs.

The cable itself can run about the same distance as a wired controller, about six feet. So it’s unlikely you’ll need to get an extension cable involved. And the batteries they’ve included were made to match-up with the batteries inside of the regular Xbox wireless and Elite controllers. So you don’t really need to think twice about compatibility. 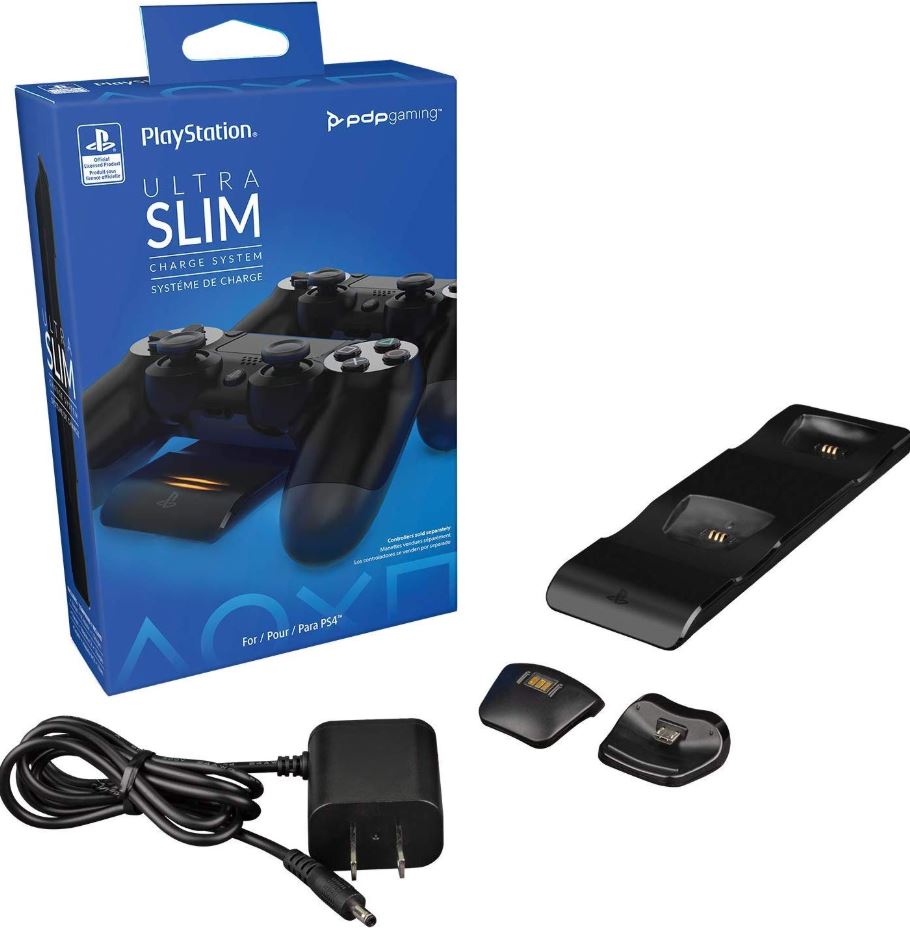 Who Should Choose the PDP Gaming Ultra Slim Charging System for PS4 and Xbox One?

A wireless controller gives you great freedom, right up to the moment that you have to start recharging them. Suddenly, you can’t even play your games. You’re at the total mercy of your battery. The PDP Gaming Ultra Slim Charging System is supposed to restore your freedom. It’s supposed to make charging your controllers faster and simpler. So even if you start to run out of battery while playing, you’re not completely out of luck.

This kind of charging system is for people who want to put in several hours playing, and never want to have their opportunity to play interrupted by low batteries. In order words, it’s for people who consider gaming more of a hobby than a mere distraction. Of course, even people who are just looking to maintain the convenience of wireless play, this controller provides more than a few ways to do that effectively.

It also doesn’t hurt that this charging system is wonderfully inexpensive. That makes approachable for people who otherwise wouldn’t necessarily go out of the way to get a charging accessory like this one. So whether you’re the biggest console fan in the world, or you just like to have fun playing a few games, the PDP Gaming Ultra Slim could have a place for virtually anyone.