In a bunch of circumstances, Joy-Con controllers are perfectly respectable. They make a lot of sense if you have smaller hands. And since they add little bulk to the side of your console, they make sense if you’re going to be playing your Switch the portable mode. At least, sometimes. When you want to go wireless, or when you want to use features like NFC, things get more complicated.

And it’s not all about comfort and convenience. When you’re playing a fast-paced action oriented game, like the Smash Bros series, then Joy-Cons might not cut it. And losing matches because your controller is inadequate will never stop being frustrating, which draws a lot of gamers to start searching for alternatives.

That’s pretty much where the HORI Nintendo Switch Split Pad Pro comes into play. This controller is basically a Switch Pro Controller that has been sliced into two separate parts. Each piece is its own grip, which is then attached to either side of the Switch, exactly like a regular Joy-Con controller. But this design is supposed to be able to provide more hold and grip over your Switch, as well as give you a couple extra tools for playing. 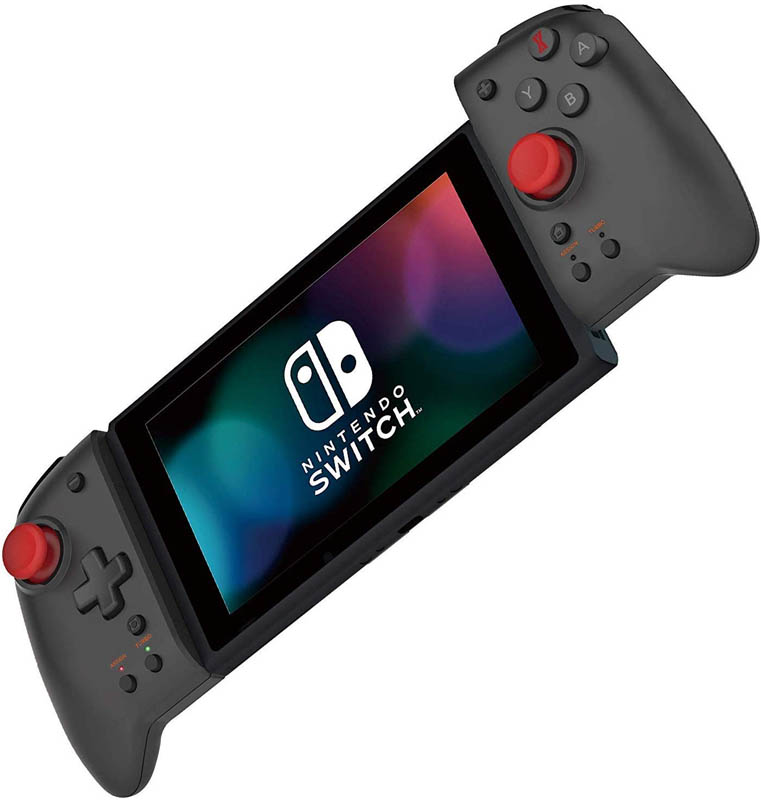 Two things are typically true of HORI gaming accessories. The first thing is that they tend to be pretty well made. That means they make use of switches that were actually designed to be put inside game controllers, and they have a quality of construction that isn’t going to break the first time you drop something.

Another thing that HORI tends to do pretty well is make attractive controllers. That’s certainly the case with the Split Pad Pro. It has a highly professional, gorgeous exterior that looks every bit as solid as controllers made straight from Nintendo. Unfortunately, there are at least a couple of minor problems with this controller, and a few ways in which it doesn’t totally live up to HORI’s reputation.

Perhaps most important of all, this is a full sized controller. Compared to the Joy-Cons, that means it’s far more suitable for adults with large hands. The larger grip, buttons, triggers, analogue sticks, and D-pad all help make this controller more accessible to adults. Of course, anytime you’re looking at a controller that wasn’t made by Nintendo, there are going to be some advantages and disadvantages.

For advantages, it’s worth noting you’ve also got several turbo buttons available. For disadvantages, you have to get a little more into the details about how this controller works from day to day. But in general, you’re looking at a fairly standard set of controls, and that’s probably a good thing. If nothing else, it means you should be able to pick up this controller and start feeling comfortable using it in only a matter of minutes. 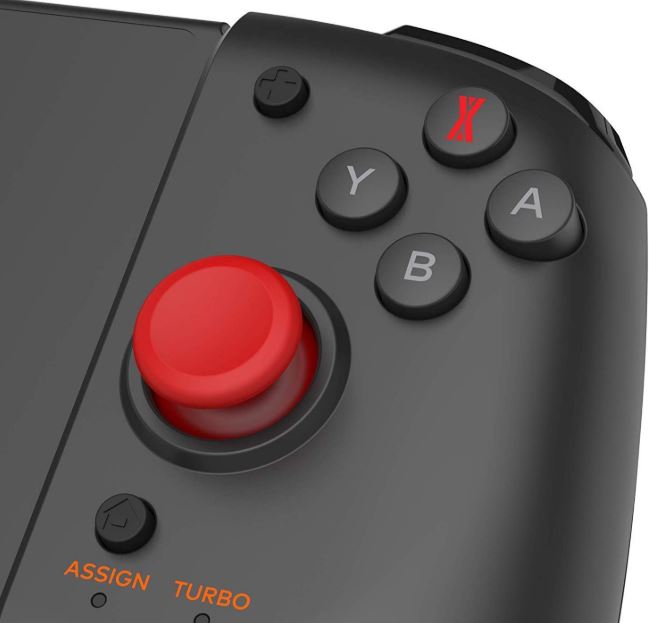 A good place to begin looking at this controller is over on the top side of the left grip, where you’ll find a firetruck red joystick. This joystick was given a slightly higher than average position, helping you grip against the bottom of the controller at a lower point. That’s not only suitable for people with large hands, it’s suitable for people with average sized hands as well because it allows you to make use of more of more physical space.

Notably, this is not an especially tall joystick, but it’s basically the same size as the one you’ll find on the Switch Pro controller. Likewise, the left grip features a perfectly standardized D-pad. Since there’s no direct comparison on the Joy-Cons, it’s hard to talk about the efficacy of the D-pad in that context. But this D-pad is pretty much the same as the one on the wired Pro controller.

Beneath the D-pad, you’ll find an assign switch, and a pair of turbo buttons. Those buttons are separated by a red and green LED, indicating when they’ve been switched on, and when they’ve been toggled off. Atop the left grip, there’s a standard trigger button, properly positioned for your index or middle finger. It’s worth pointing out that the switches inside those buttons feel springy and responsive, plus you don’t have to move the buttons very far in order for them to actuate the switch.

There’s also a minus button, with the adjoining plus button being placed on the other side of the controller. Speaking of the other half, towards the right half, you’ll find a very similar layout to the left half. That includes a bright red joystick, except it’s positioned closer to the center of the pad. The different positioning is because of the XYAB buttons, which are placed right above it. This placement ensures you just have to move your thumb down briefly to conveniently access the second joystick, which is very accessible.

As with the left half, there’s a trigger button placed atop the grip, and again on the middle of the backside. Additionally, there’s another turbo button, and a home-screen button for returning to your Switch’s home screen. All in all, that’s a fairly balanced controller. The only big difference between this and an official Pro controller is style and turbo capacity. 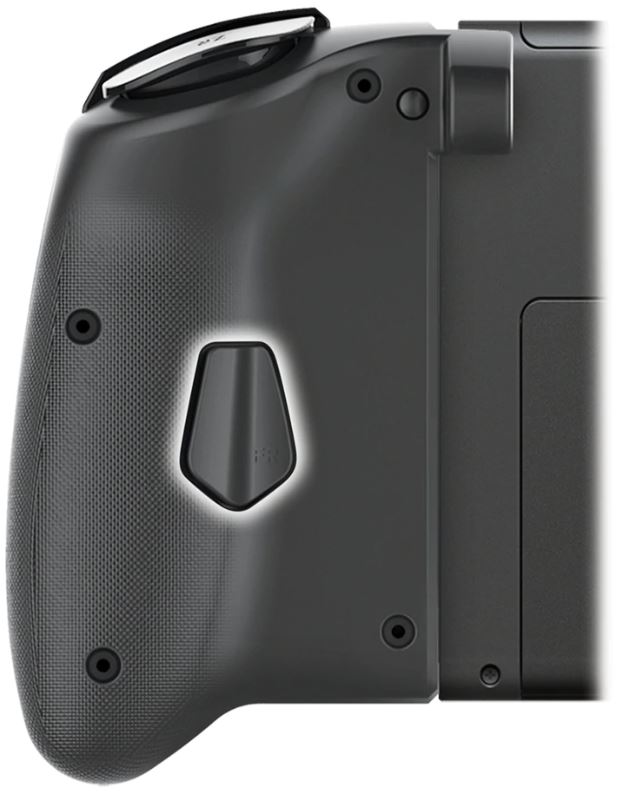 Ease of Use & Adaptability

Notably, all of these buttons are fixed. In some of the higher end gaming controllers out there, it’s possible to swap out multiple different kinds of joysticks, or even change out the standard XYAB buttons into something else. Given the more middle-of-the-road pricing, it’s not surprising that this controller doesn’t use a modular design. And apart from that, you should find that actually using the Split Pad Pro is pretty straightforward.

Actually placing your Switch into the controller is as simple as attaching a pair of Lego bricks. Probably simpler because you essentially just slide the controllers into place. That makes the installation and removal process virtually foolproof, It’s also impossible to damage or wear-down your switch or the controllers by repeatedly adding or removing the remote because there aren’t any parts which move or lock into place, so there’s nothing to break.

Because this controller is a tad larger than the Joy-Cons, it’s fair for people with smaller or average sized hands to wonder about how it will end up feeling. For the most part, you can rest easy. Since this design is essentially just a regular Switch Pro controller that’s been split into two halves, if your hands fit decently on a regular Pro controller, they will fit about the same with this controller.

The only difference is that the weight of the controller feels a bit heftier once you’ve got it wrapped around the Switch’s panel. That weightiness doesn’t really become bothersome though because the size of the controller keeps that weight well distributed, and so feeling a bit lighter than it really is. Plus, the weight of the Split Pad Pro actually compares favorably with standard Joy-Cons.

Do the HORI Switch Split Pad Pro controllers have everything a regular Pro controller would have? Unfortunately, the answer is no. The size and separate distribution of these controls makes it uniquely challenging to implement a compelling rumble feature. As such, these controllers do not support HD rumble.

Fortunately, there are basically no games on the Switch platform that treat rumble as essential, virtually all of them treat it as an afterthought. Unfortunately, there are still a few more missing features. Since these are not battery powered, there are a couple limitations there. Additionally, there is no NFC reader, and there’s no IR camera.

It’s only when cases are made for a specific device that you’ll have a harder time managing the Split Pad Pro, due to it being split in half. Speaking of being split in half, if there’s one thing to dislike about this controller, it’s the missed opportunity HORI passed up in its split design. It would make so much sense for you to be able to take these two separate grips and combine them into one unit. Even if it wasn’t actually any good being used in that way, even if you were only using it for storage, that would’ve been really cool. So it feels like it’s a missed opportunity.

But while you’re portable, there’s no denying that this controller is a much better choice for action games. It’s also a greatly better choice for people who have larger hands, and so may find the Joy-Con remotes a little restrictive. Especially for games that are faster paced action games, which require more timely inputs from your controller.

If you’re willing to spend far more for a portable controller, then you can makeup some of the missing features from this device. But around this price range, which is the typical price for most game controllers, the HORI Switch Split Pad Pro represents a pretty strong value. It’s a reasonably well built controller that should represent an equally strong value.