Clean air can really be important to your health. For people who have allergic reactions, it’s reliability that seems to count the most. But the importance of air purification is present even if you don’t have allergies. After all, air pollution has been shown to increase aging on the cellular level. Even just living in a bigger city, like Los Angeles, would ensure that you’re breathing in enough polluted air to shave years off your lifespan.

Regardless of the reasons why you’re selecting the unit, an air purifier should just work. You should be able to plug it in and then forget about it. When it’s doing its job, you really shouldn’t even know it’s there. And that’s essentially the kind of machine the Levoit LV-PUR131S was made to be. It should work out of the box, and it should be as easy to setup as plugging in a cable. 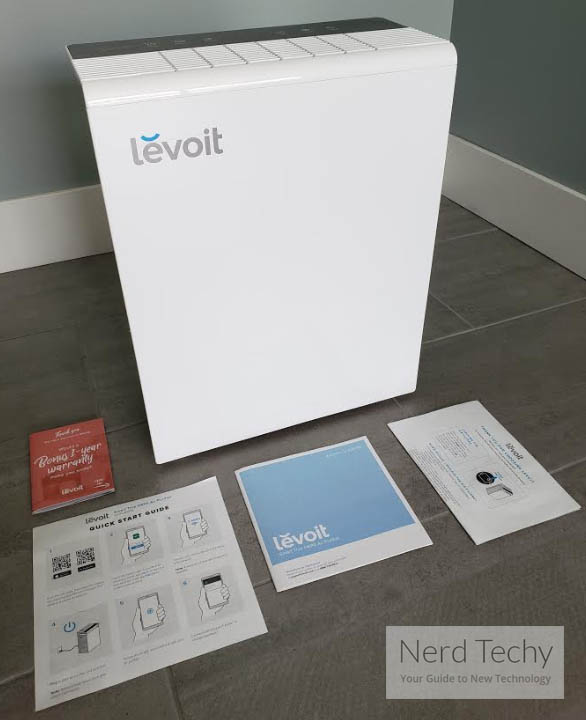 Of course, when you’re running a slightly larger air purifier like this, you probably have to spend more time thinking about when you want the machine to operate. Because if it’s always humming along at the lowest speeds, then it’s not going to be able to plow through large quantities of air, making it less suitable for larger rooms. Conversely, if you’ve always got it running at the higher speeds, you’ll necessarily be wearing down your filters a little bit earlier. You’ll also end up with a persistent humming noise that most people would prefer to avoid.

That’s why people need to be able to manage their air purifier, or have the air purifier manage itself. Because some days there are more pollutants than others. On a bright summer day, many tons of pollen spores are constantly coming through your windows. In the fall, maybe you pull some old things out of the back of your closet, and they’re all coated in dust which gets pushed up into the air. In either case, you need your air purifier to be a little more adaptable on those days. 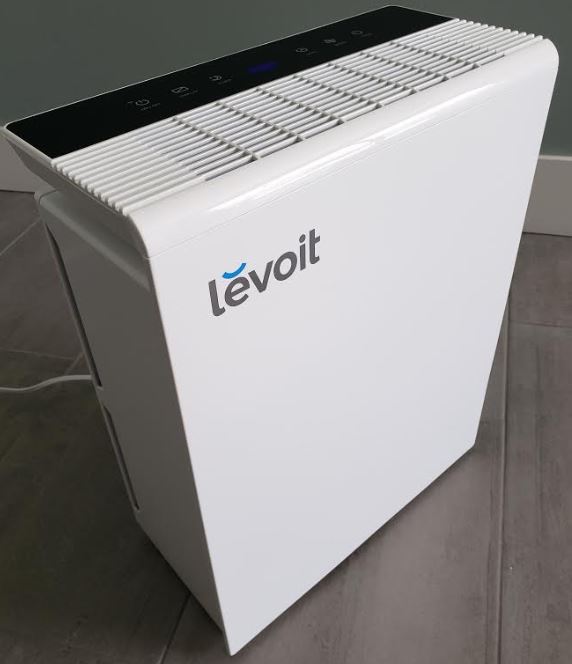 The LV-PUR131S has a large, square build. It measures roughly 22 x 17.5 x 10 inches, giving it a definite presence within a room. One could easily mistake it for a small space heater. Likewise, the body weight around 14lbs, which is surprisingly heavy for what is effectively a couple of filters being run over some high efficiency fans. You could technically position this unit anywhere in your home, but with that kind of weight, a floor placement probably makes the most sense.

Instead of having to rely solely on the physical-digital interface on the machine, you’ve got a pretty good amount of app support available. From the app, you can initiate the automatic sleep mode, or swap over to the auto mode. The auto mode is reliant on internal sensors which test air quality, and then make a judgment call on how fast the fans should be run.

If the air is in pristine condition, the air purifier will start running on a very low setting, drawing very little power in the process. If the purifier senses more pollutants than it would like, it will kick into high action and start pulling them out of the air at higher speeds. As with the digital interface on the machine, the app also lets you monitor air quality from afar. That includes four ratings, ranging from very good to bad. Depending on your own sensitivity, you may find that ‘good’ is livable, while anything less than the good setting could set off allergies.

In order to remain adaptable, Levoit LV-PUR131S does a couple of neat things. For starters, there’s the VeSync app, from which you can teach the purifier to have its own schedule. You can then remotely monitor the quality from your app. Within the app, you can also set timers, change the operation mode, flip on or off the LED display, and so forth. This remote control allows you to adjust purification settings from anywhere you happen to be. At least, provided you have an internet connection on your phone or tablet at the time. 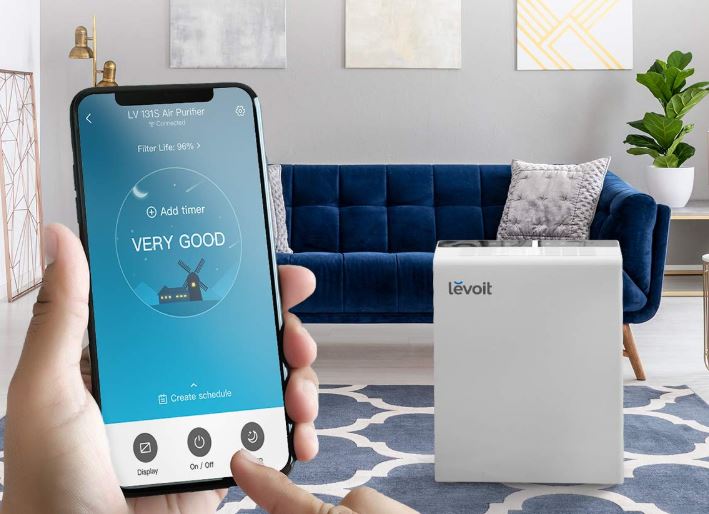 The next layer of control relates to voice commands. The LV-PUR131S is compatible with Google Assistant, IFTTT, and Alexa. That means you can pretty much connect your purifier into your smart home in a totally seamless fashion. For people who are looking to be terribly hands-on, it would be possible to coordinate your lights, security camera, and other home electronics to integrate smoothly with the air purifier. That way, the next time you pull into your driveway from work, the air purifier can spin down to a lower setting.

With IFTTT, your imagination is pretty much the limit. Of course, for people who aren’t looking to do a bunch of IFTTT programming, support for voice assistants also means you can control your air purifier through simple voice commands. That might include something as simple as “Echo, turn up the air purifier.”

Most of these Levoit air purifiers make use of a three stage filtration system, including the LV-PUR131S. The first stage involves a basic pre-filter, there to catch dust and debris. The second stage involves a HEPA filter, which is there to collect the smaller particles, which are the most hazardous towards your health. 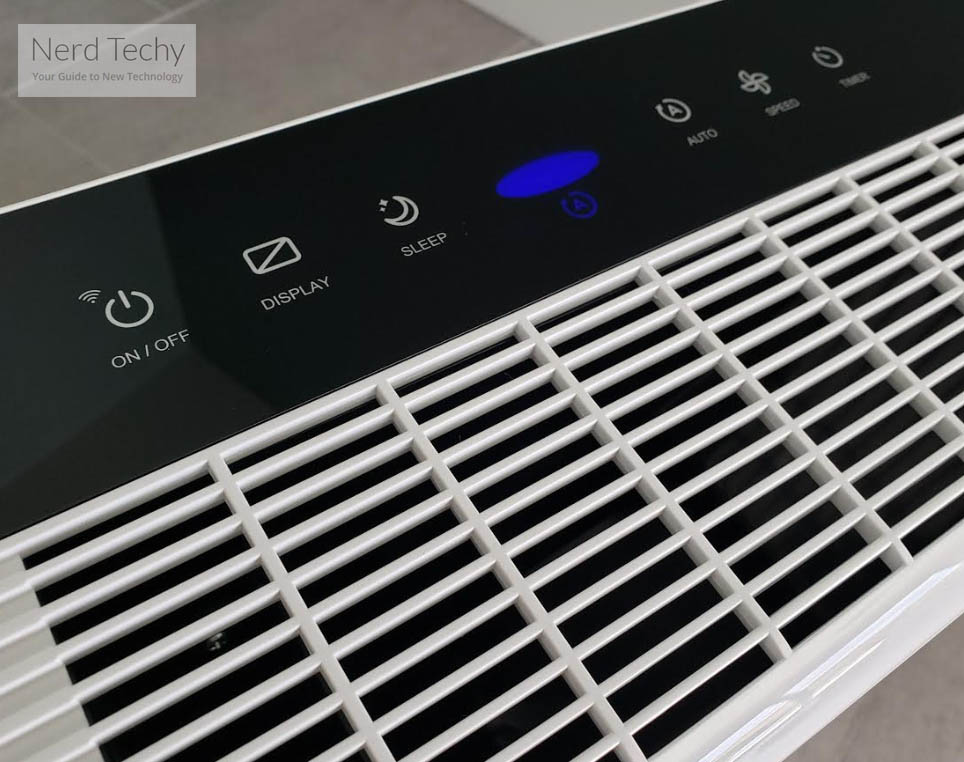 The third and final filter is an activated charcoal filter, which is really just there to help scrub smells out of the air. These three working together are actually quite effective at pulling particulates out of the air. That includes smoke, dust, pollen, hair, and of course mold spores. Keep in mind that this filtration process is not designed to handle most chemicals — but it will remove smells. 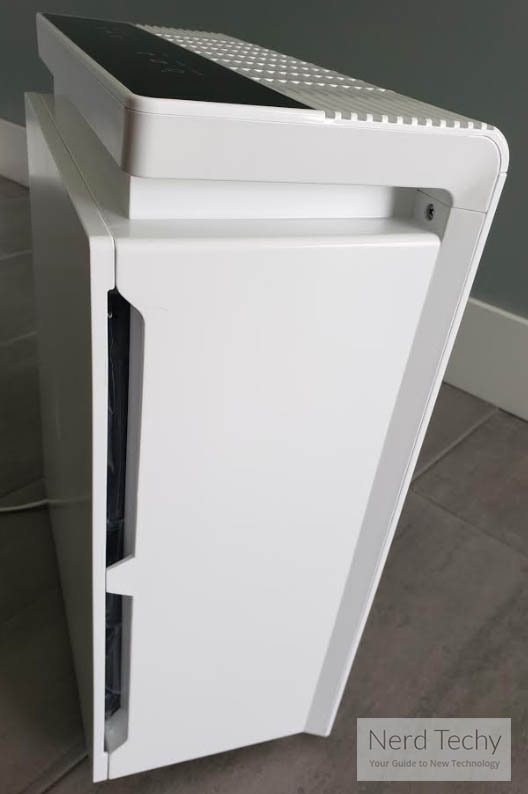 You can’t give too much credit to the efficacy of this system, as it’s essentially the same system used by virtually all similar purifiers. But there is at least one exception which I reviewed recently, the Molekule Air Purifier. Compared to the LV-PUR131S, it’s enormously expensive. But it’s also able to destroy what it captures rather than merely collect it, which is far more sanitary. 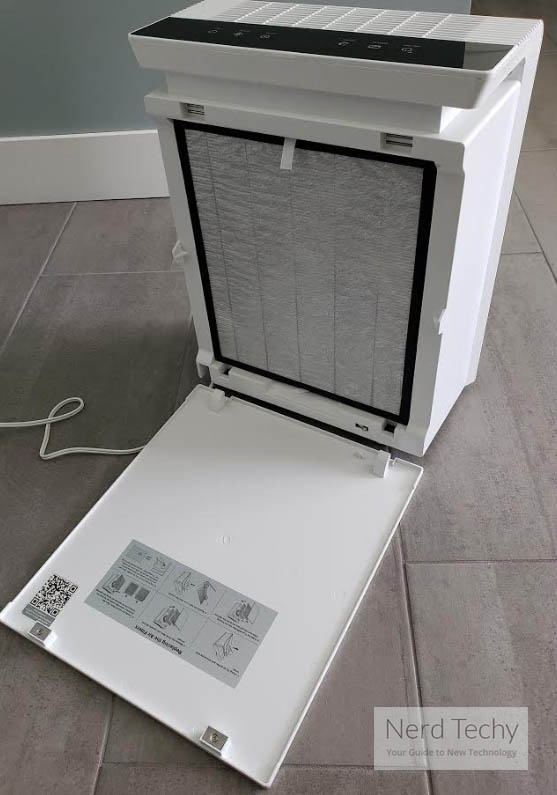 Most of the time, you probably don’t want to micromanage your air purifier. You may just want to the ability to operate it through Wi-Fi as needed, and otherwise expect the machine to take care of itself. And the LV-PUR131S was pretty much made to do that. Using a so-called smart algorithm, the purifier is able to calculate the lifespan of the filter in relation to the specific filter’s circumstances. In other words, not based on some arbitrary timeline given by the manufacturer who wants to sell a bunch of filters, but given by an actual evaluation of the speed at which air is passing through the filters. 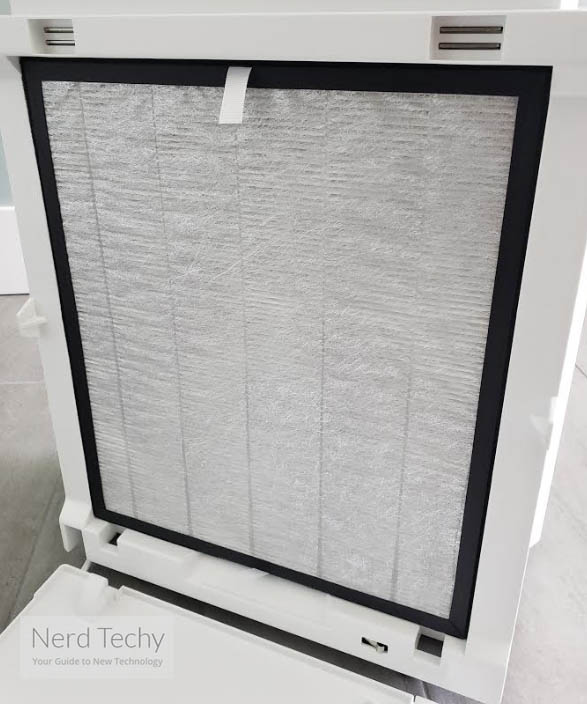 You can also find adaptability. For instance, there’s a 1 to 12-hour timer which you can set. That’s the same range of options Levoit placed on their higher-end machine, the LV-H134. And when you’ve got a little bit of smoke in your kitchen, hitting the 2-hour timer is a nice way to handle the problem.

Notably, the LV-PUR131S actually uses a higher efficiency design, aimed at pulling lots and lots of air through, and aimed at facilitating a larger room. It can comb through 360 square feet of air in around 4.5 times per hour. That makes it suitable for almost any room in a home, from bedrooms to kitchens. That makes this purifier about 30% faster than a couple of the other similarly sized Levoit purifiers. 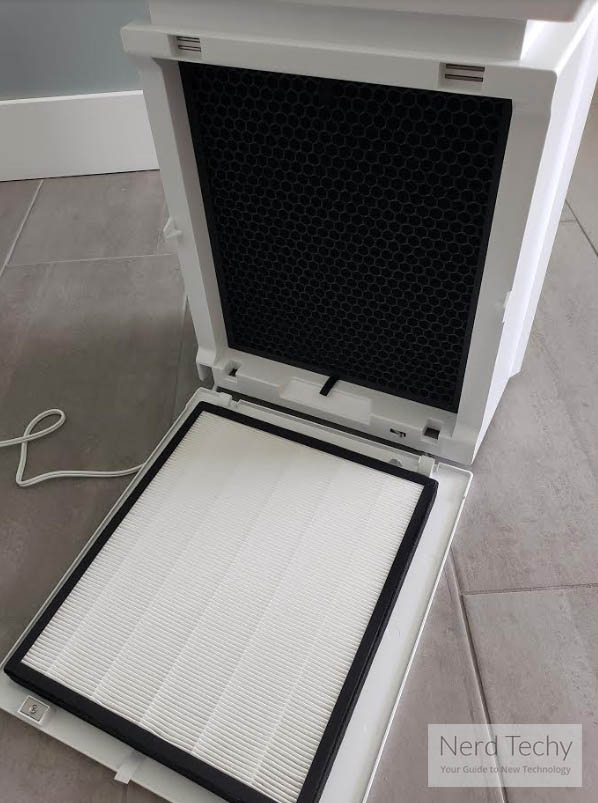 How about the noise? Well, you probably won’t be bothered by the noise put out by this machine. At the lower level of operation, this purifier puts out around 27dB of ambient noise. But if you have tons of pollutants entering your home, perhaps as a result of good airflow moving through your place, then you’re probably going to need this thing running on higher speeds more often. Or perhaps you’re just really bothered by these kinds of noises.

In any case, you might decide to have the filter do most of its cleaning while you’re away at work or asleep, that way you don’t have to listen to it. And admittedly, it’s a pretty quiet filter, even while in full operation. It peaks up around 55dB, which is loud enough that you would probably wouldn’t want it running while you were watching television, but not so loud that it would interrupt conversations. 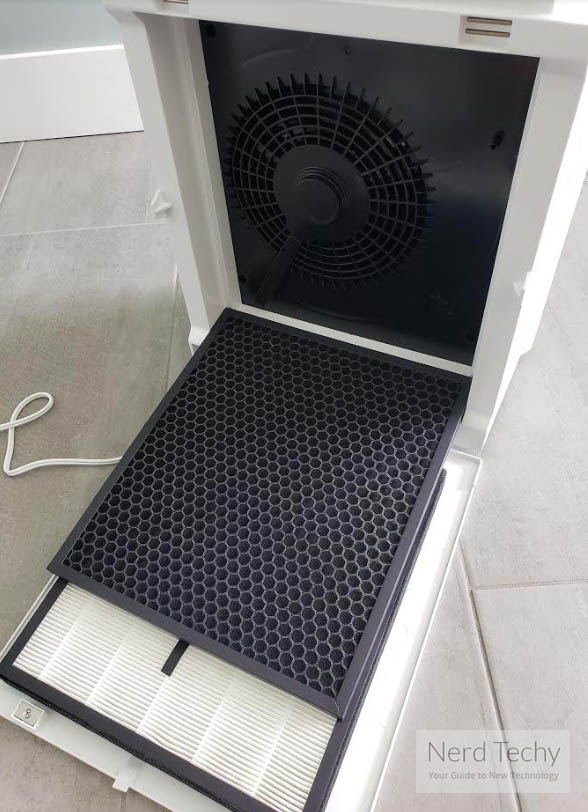 The LV-PUR131S also uses an energy efficient design, which is FCC certified, CE and ETL listed. That helps keep operational costs down over time. The replacement filters for the LV-PUR131 are also about averagely priced for HEPA filters. So there’s no additional savings to be found, but at least they’re not unusually expensive.

For a Wi-Fi connection with the unit, using the app, you’ll need to be able to position the purifier in an area of the home where it can join your Wi-Fi network. Because the purifier does not have Wi-Fi direct technologies, which means you can’t connect with it independently of a Wi-Fi network, you have to be on the network to connect. Additionally, you can’t use the 5 GHz band for your connection, you’ve got to be using the more common 2.4 GHz band. 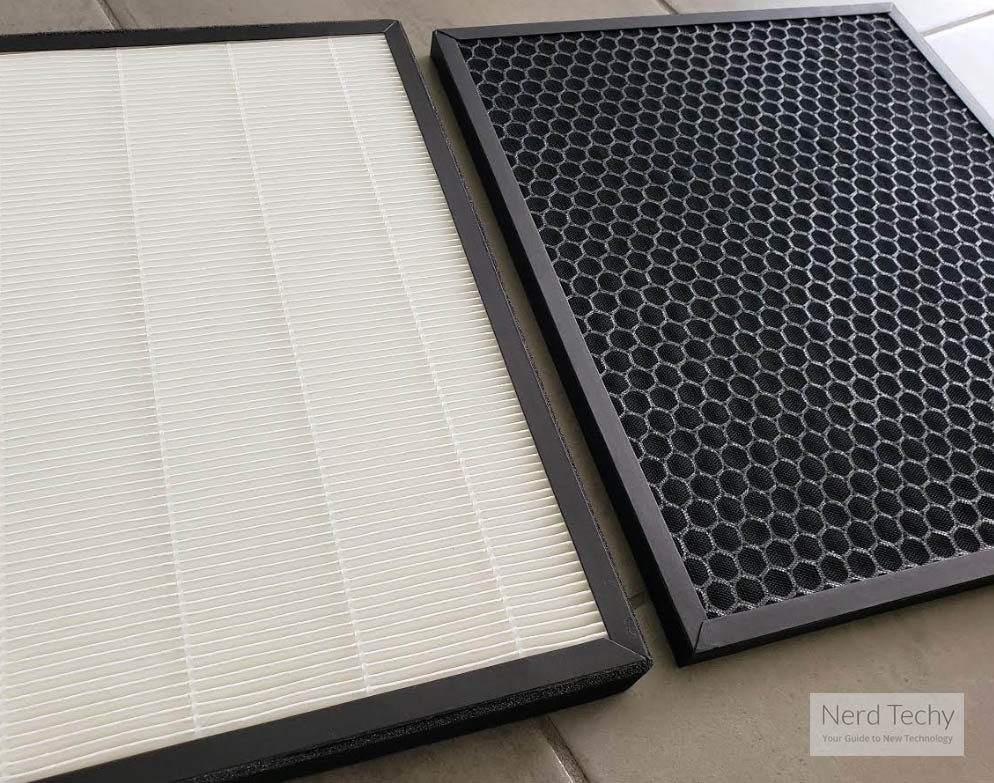 Who Should Choose the LEVOIT LV-PUR131S Air Purifier?

The Levoit LV-PUR131S is a higher capacity unit, aimed at larger rooms and smaller homes. It also has a heavily emphasis on remote control features. That makes it especially useful for people who want to minimize the noise coming out of their air purifier. When properly managed, this unit is about as quiet as any of the Levoit air purifiers, which really ought to be encouraging.

If you needed to purify the air in a much larger room, like a 30 x 30 space, then you’d need something a little bit larger, like the LV-H134. For higher capacity units, you’ll end up paying considerably more, so it’s best to go with the smallest unit that can still manage the area you need managed. But for people who only need to cover around a few hundred square feet of space, this machine really ought to do the trick.