You’re out trying to shoot a video. Maybe it’s impromptu and you just happened to see something you want to record. Maybe it’s something you’ve planned, and you have got some time to determine where you want to shoot. In either case, you’re going to run into trouble if you expect the mic on your smartphone or camera to be sufficient on their own.

Because when you’re using a microphone placed deep inside the chassis of some device, like a smartphone or earbud microphone, then that mic will invariably have some real limitations. It’s not going to be able to capture a lot of the directionality of sound, which is really important information when our brain is deciding whether something sounds realistic, or if it sounds like a poor reproduction.

The idea of adding a separate microphone to a camera isn’t exactly a revolutionary idea. But adding them to smartphones is something that’s actually fairly new, and it opens up some surprisingly fresh possibilities for a variety of content creators.

From first glance, the Rollei Hear Me Mini seems like a pretty basic video microphone. But it actually takes a lot to make your microphones work well. That’s why recording studios exist, which are essentially just an extremely controlled environment that ensures your microphones aren’t battling environmental conditions during recording. 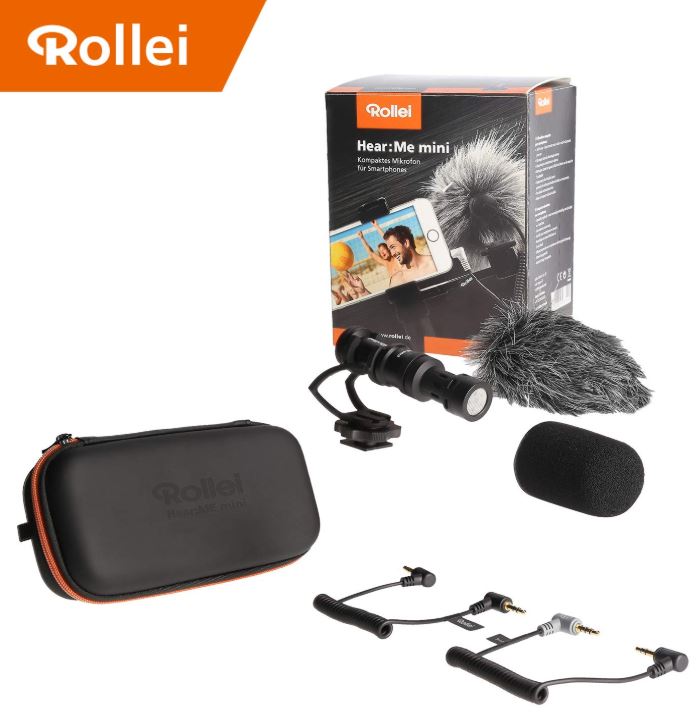 But in reality, we cannot carry a recording studio with us. Microphones need tools to be able to fight off unwanted environmental sound. That means if you want to record sound on the go, you have to get a little more creative with your sound capture. You might need to get some kind of arm to extend the microphone into position, and you’ll almost certainly want a couple of different shielding options to protect the mic from various environmental conditions.

So even though the Rolei Hear Me Mini looks like a pretty ordinary microphone, again, there’s actually a lot going on here. But fortunately, characterizing who this microphone is for is quite easy. It seems that the Hear Me Mini is generally aimed at fans of vlogging, and YouTube content creators. But basically anyone who is dissatisfied with the recording quality of the microphone on their smartphone should be able to find at least some appeal.

The microphone itself is pretty small — it measures about 0.8 x 3.3 inches. Though the diameter will change slightly depending on the filter you have attached at the time. So when you’re using the longest and largest filter, it might extend an inch or so further. With respect to the rest of the device, you’ll find it has an extremely lightweight design, coming in around 34 grams.

That means once you’ve got it attached to your smartphone or camera, you can pretty much stop noticing that it’s there. Notably, you could connect this device to a tablet as well. Or a laptop, or even a home PC. But this design was clearly made for outdoor use, which really emphasizes the smartphone and camera over all other alternatives.

In terms of installation, things remain pretty simple even for the most complex of possibilities. For instance, suppose you wanted to mount this microphone to your DSLR camera. In order to do that, you could screw the mic atop your cold shoe using the included shock mount. And that’s it – screw it on and you’re done.

The shock mount deserves special mention because it helps contribute to a more even sound quality, especially through stronger gusts of wind and other potential interruptions to the recording. For instance, if you start jogging while recording, the shocks can come in handy. Because anything that can make the microphone a little less shaky will help recording quality. 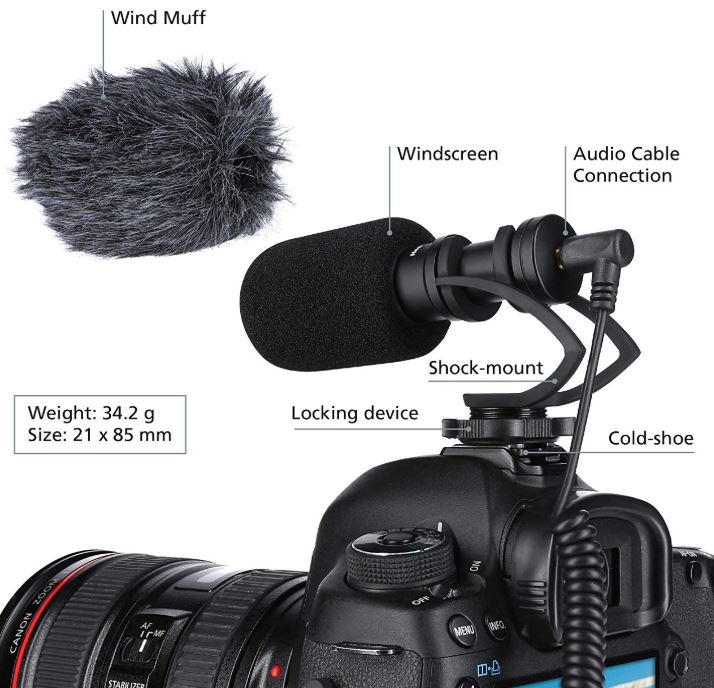 Using the Rollei Hear Me Mini

How does this mic install, exactly? Well, it’s really no more difficult than connecting a pair of headphones to your smartphone. In this case, the external microphone gets connected to your smartphone or your camera with the aid of an included cable. And that’s it. You just pop the microphone into place, add the cable, and you’re ready to start shooting. You could hardly ask for a simpler setup process, with perhaps the exception of a one button Bluetooth setup.

Once connected, your camera or smartphone should pretty much instantly recognize the Rollei Hear Me Mini. There’s no need to start downloading any special software or app in order to manage the microphone — it’s as plug and play as anything.

The Rolle Hear includes one fur protector, one pop protector, one connection cable to hook-up with your smartphone/camera, and one carrying bag. The bag isn’t technically hard shelled, but its firm enough to keep its shape. A large zipper runs along the edges, making the case open widely.

Between all those included accessories, it’s quite easy to shoot in a wide variety of different conditions. That way, the weather doesn’t have to stop you in your tracks. But you will have to be prepared to swap between the different filters as needed. Adding and removing the accessories is basically as simple as popping them into place. You don’t need special tools, and you don’t need large amounts of strength. 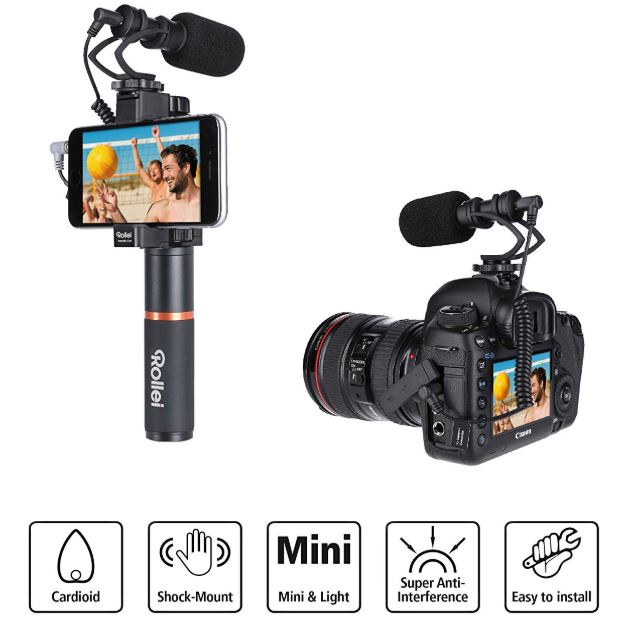 The frequency range of recordings runs from 80Hz to 16000Hz. That’s not actually that far into the upper treble range. So if you’re trying to record extremely high pitched noses, you could encounter some issues. But for most types of recording, that’s just not going to matter. Or it could even be beneficial because it means you’re less likely to be disturbed by unwanted high-pitched sounds, like a bus throwing on its brakes. Experientially, most people don’t encounter sounds beyond 16000Hz in ordinary day-to-day life.

Another thing to note is the sound pressure level for this microphone is set at 100 dB sensitivity. More than enough for attaching to your phone. You’re able to pick-up fairly small noises even from pretty good distances away. You can basically think of this microphone has having the hearing capacity of a person. If you’re 50 yards away from the microphone, then a conversational tone isn’t going to get picked up. But if you’re in a range where a person could hear you, then that’s about as good as the mic will hear as well.

When it comes to recording quality, especially in the outdoors, a lot of what this microphone can do for you is only possible because of help from included accessories. Of course, in this case, the Rollei Hear Me Mini helps ensure you don’t necessarily need to use those accessories in order to get good recordings. Because the integrated swing compensation is there to help reduce the amount of noise you hear around your environment.

But the built-in compensation isn’t going to be enough to protect you in all circumstances. So that’s when you need to look towards the accessories you can throw on to help the microphone have an easier time when conditions change. Perhaps most notably, there’s a fur protector included to protect the microphone from the wind. There’s also a pop protector that comes preinstalled.

Between the two of them, you pretty much have the ability to shoot in nearly any common environment. You just aren’t ready to take a dip into the ocean. And it might be worth noting that because all of these filters can be removed, it’s possible to find replacements as needed. So if your windscreen becomes damaged, replacing it wouldn’t be a great challenge. That also means that theoretically, you could try upgrading the included filters with others, perhaps some you already own. 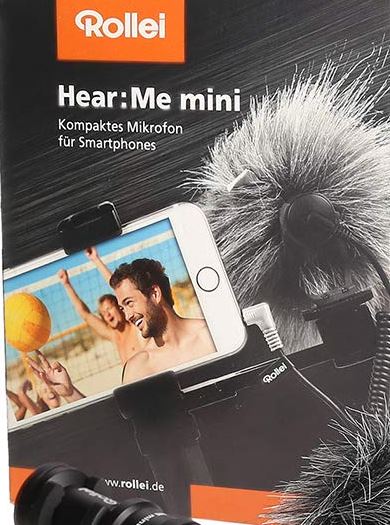 If you’re trying to record sound inside an absurdly loud space, and you expect to get good results in your recording, then there’s no way around the need for specialty equipment. You might need to run several mics working together in order to create a sound that can help eliminate environmental noise.

For people who want to try recording inside of a busy airport terminal in the middle of the day, you’ll find the Rollei Hear has essentially all the same limits you’ll find on attached to any other one microphone kit. You can’t thrive in extremely noisy environments. But for recording alongside the road? It’s not so bad. 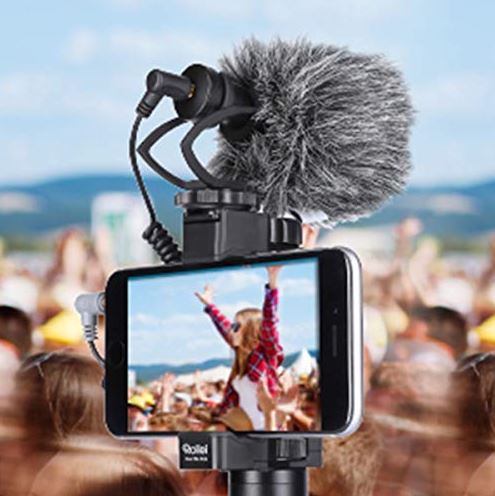 Who Should Choose Rollei Hear: Me Mini Compact Microphone for Smartphones?

One thing that’s easy to like about this microphone is that it is easy to install. That’s largely because it’s possible to mount the Rollei Hear Me using a camera shoe, with a standard quarter inch thread. So if you can screw in a light bulb, then you’re going to be able to handle installing the Rollei Hear: Me Mini to a camera. And it’s about just as simple for a smartphone, even though you don’t have the stability benefits of the quarter inch threads.

The microphone quality of the average smartphone is going to be passable in a lot of circumstances. But again, there’s only so much you can do with a microphone stuffed into the inside of a tiny space. A larger mic like this one can collect sound with a better sense of directionality, and add a lot of professionalism and production value to the content you create on your smartphone.

For people who do vlogging as a hobby, that makes the Rollei Hear Me Mini a pretty good way to instantly add to the protection quality of your kit. For people who create content in a more professional capacity, this kind of microphone might be a necessity. Because nobody wants to listen to a video that sounds like it was shot on someone’s smartphone. Most of the time, we’ll still listen to those videos. But it can deter people. And that makes Rollei’s mic a smart investment for certain types of content creators.