Compared to playing with a regular console controller, having an actual fight stick can be an infinite improvement. Especially if you’re someone who’s practiced around these types of controls in the past, since they can have a big impact on your ability to control the game. Having a good fight stick by your side can be just as immersive as playing on an arcade cabinet. But given the individualistic nature of this type of equipment, finding the right stick can be tough.

Again, some players take fighting games a little more seriously. Some players are more casual. And even though both groups of players will enjoy fighting games, they’re probably going to want to use different equipment for playing. With that in mind, the HORI Switch Fighting Stick Mini was clearly made for players who are a little more on a casual end of the spectrum. 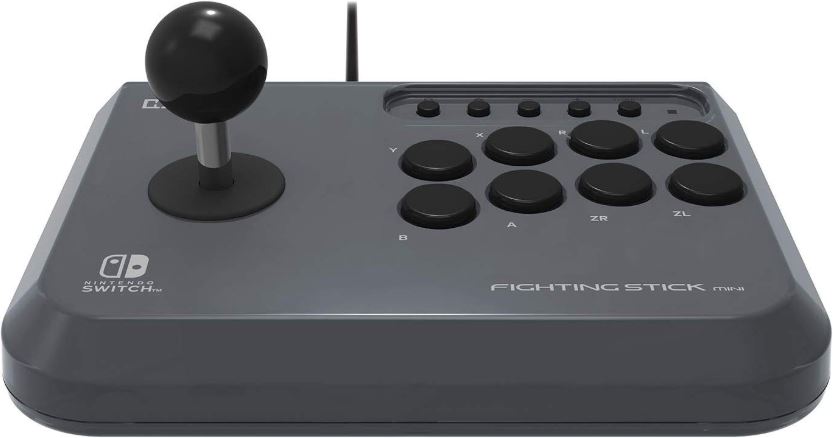 That’s not to say it’s a weaker fight stick. On the contrary, the Mini maintains a design that pros wouldn’t necessarily turn their noses up at. And especially among players who are trying to get a quality fighting stick while sticking with a smaller budget. Because the performance of the mechanical switches behind each button on this pad compares favorably with some pretty high end gaming gear.

And the performance of the stick itself is almost equally admirable. It’s really only when you start to dig in and look for customization options that you might be disappointed with this fighting stick. Because you can’t really swap out the stick for another stick, or change the buttons around in any significant way. The user interface is basic and straightforward, which is probably both its greatest strength and its greatest weakness.

Living up to its name, the HORI Mini measures 8 x 3.4 x 6 inches. Fairly small and compact. One problem that’s common with fighting sticks is that this type of game controller tends to get pretty big. Some of the best sticks on the market are actually large enough to cover your entire lap, much larger than the size of a cafeteria tray. But the HORI Mini is hardly any larger than the size of an ordinary game controller.

Likewise, its weight is reflective of a pretty small and compact device. It weighs about 4 ounces, making it a great option for gamers who are on the go. Because that weight isn’t going to stop you from shoving the controller into your bag, or otherwise taking it with you to play on the go.

Small can be a good thing, and small can be a bad thing. In this case, you’ll find that even though the HORI Switch Mini is quite small, it’s actually fairly comfortable. Because it was made large enough for both of your wrists to rest on it. It’s not totally unlike resting on a wrist pad in front of a keyboard. Though there’s no padding, similar to a proper arcade cabinet. 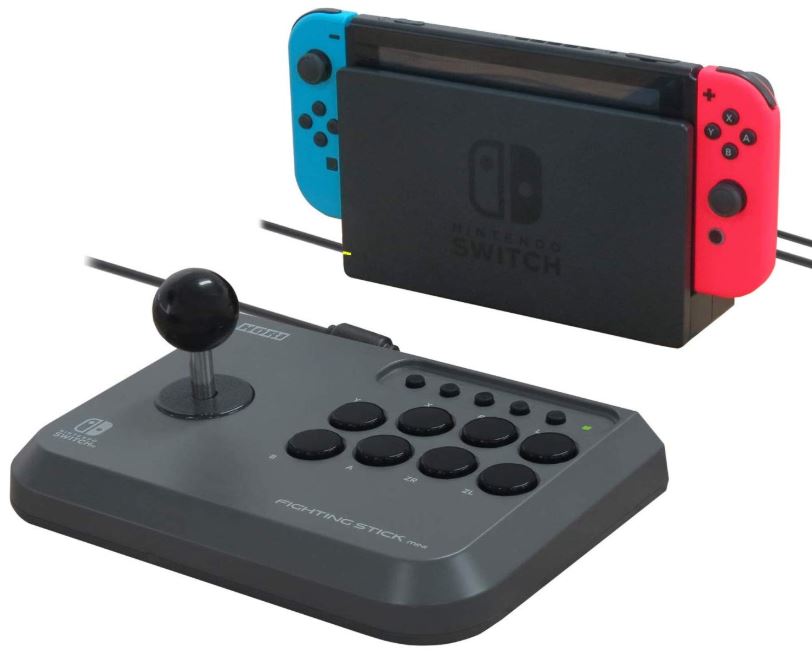 Stability is something that tends to be at odds with size. Even though it’s quite small, the Stick Mini is also quite stable. That’s mostly the result of some rubberized feet on the bottom, which help you stick the Mini onto various surfaces with ease. Even if that surface happens to be glass, the rubberized feet do a pretty good job of keeping everything stable and steady.

There are only a couple more things to highlight about the physical design of this fighting stick, but one of them that really needs to be pointed out is the wired connection. The cable runs about nine feet in length, which compares favorably with ordinary game controllers. That’s something which is easily overlooked, but it can really hamstring your play when you end up with a controller that doesn’t give you enough range.

Naturally, you could use the HORI Switch Fighting Stick Mini to play any number of different games. You could probably play some shooters on this and have a blast. But it’s clear as day that this gamepad was designed for fighting games first and foremost. And you can mostly tell that from the full eight button layout. 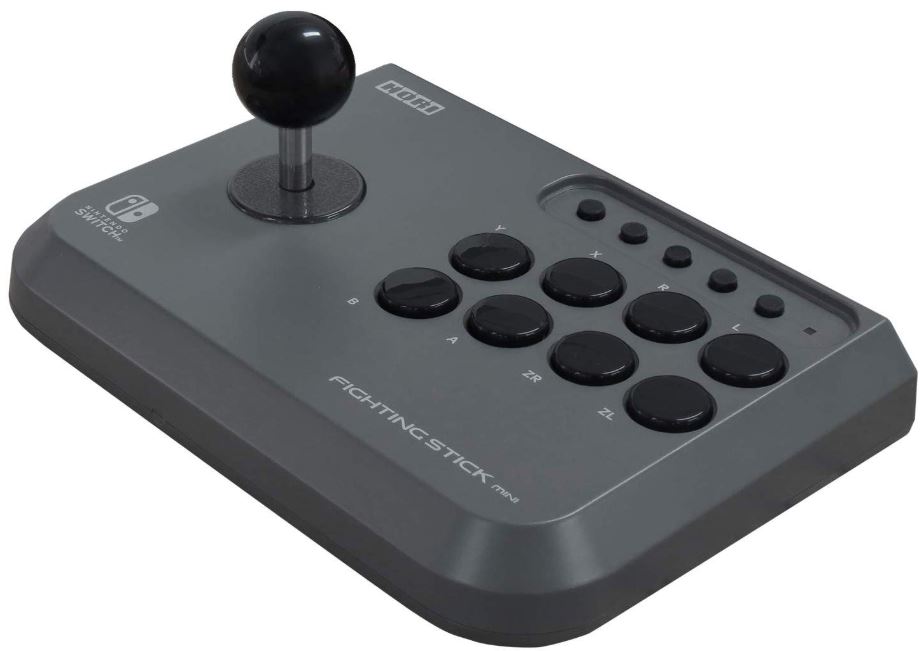 Thankfully, each of the buttons is clearly labeled with Switch-friendly button identifications: Y, X, R, L, B, A, ZR, ZL. People who are not familiar with using these kinds of Fighting Stick controllers will be able to get up to speed quite quickly because clearly this is a fairly standard layout for a Switch controller. And if you need to change these buttons by remapping them inside of a game, that shouldn’t be too challenging if the game allows it. But unlike some premium-tier fight sticks, this equipment doesn’t allow you to independently remap the buttons without the assistance of a game.

The diameter of each button is pretty large, each approaching the diameter of a quarter. Large enough for players with hands of any size to make good use of while playing a fighting game. The buttons have a nice deep when you push into them. They react like proper mechanical switches. Even though they’re not constructed with premium-tier mechanical construction, they still have a generally high quality design that’s about on par with what you’d expect from a controller manufactured by a Nintendo or a similar large console maker.

It would’ve been nice if HORI had made the stick swappable. The included stick is pretty good, but being able to move to a slightly longer or slightly shorter stick, or being able to swap out the grip on the stick, that would’ve really pushed this controller to the next level. But again, the included stick is pretty good, so this is a minor complaint. 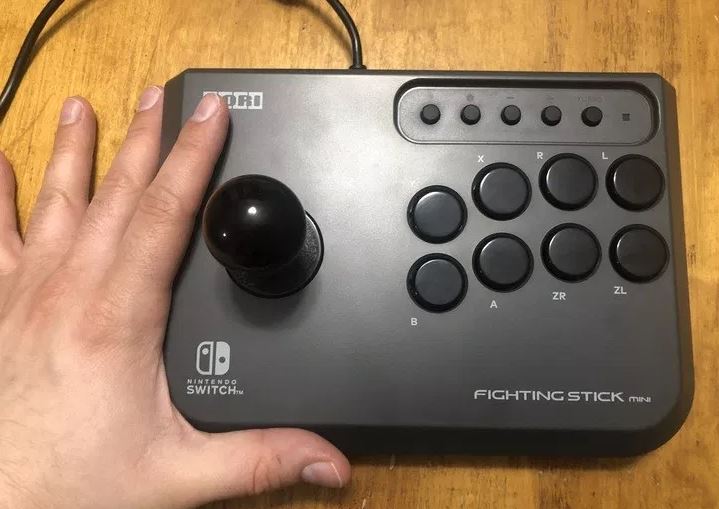 The positioning and spacing between the buttons and the joystick is pretty much perfect. Once again, it allows people with either small or large hands to make easy access with the controller. And the joystick itself is just about a work of art. Like a proper joystick, it’s micro switch activated for the sort of control you need in fighting games.

Whether you’re trying to input a cheat code or you’re trying to execute a complicated technique, you need exact timing, and that’s only possible when your controller doesn’t feel sluggish and irresponsive. The HORI Switch Fighting Stick Mini is quite the opposite, reacting with great responsiveness. 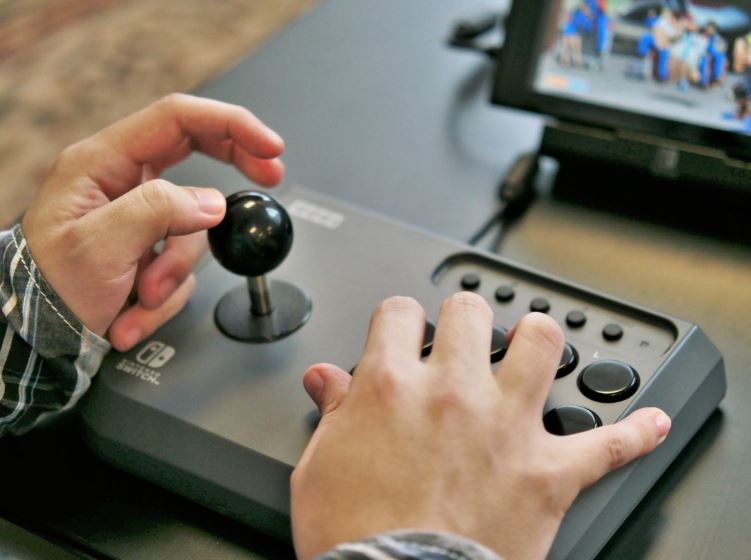 If you were interested in playing fighting games on a more competitive level, the HORI Switch Fighting Stick Mini would be better than playing with an ordinary controller. It wouldn’t quite compare to using something from top shelf, like the Victrix PS4 Pro FS Arcade Fight Stick.

And the reason why is mostly because high-end customization options aren’t there. Though this equipment is certainly above-average in its quality, it’s not the performance-grade gear you can find when you’re willing to spend $200 or more. With that said, the HORI Switch Mini holds its own compared to other fighting sticks in this price range. 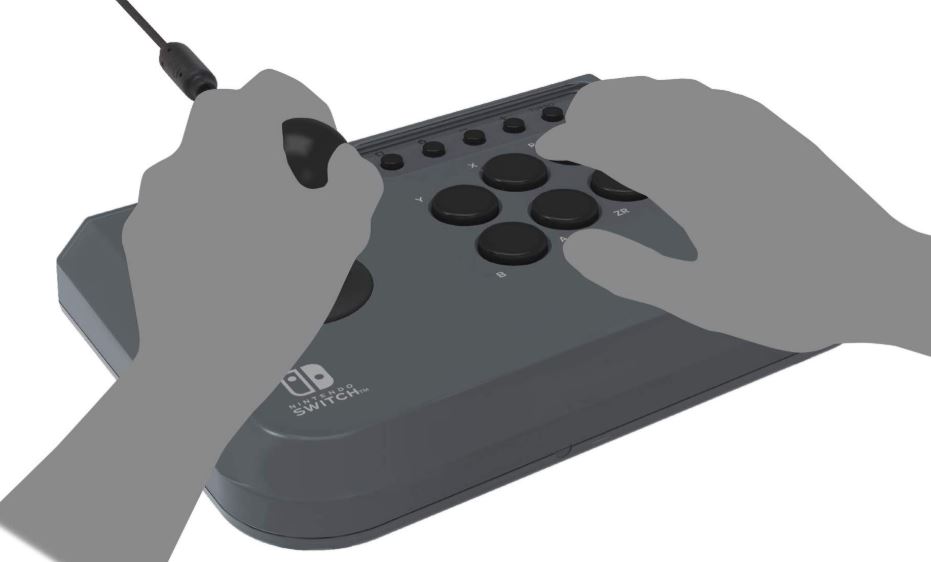 Above the eight button layout, you’ll find some basic controls you should be able to immediately identify as Switch controls. But in addition to the buttons which let you navigate the Switch, you’ll find a plus and minus button, a turbo button, and a small LED. The extra buttons are really nothing too special, but having them transforms the Fighting Stick Mini into a full-fledged Nintendo controller, which is a bit convenient. And it was probably necessary for HORI to get Nintendo’s certification of their design.

There are advantages of being certified and officially licensed by Nintendo. The biggest advantage mostly relates to compatibility. More specifically, you don’t have to think twice about running into compatibility issues when you’re using a controller that’s been officially licensed. That means you can expect toe HORI Switch Fighting Stick Mini to perform every bit as reliably as an ordinary stock Nintendo controller.

However, as mentioned earlier, there isn’t cross platform support. You can’t take this controller and use it on a PlayStation, Xbox, or even a PC. That doesn’t sound like much of a fault, until you realize it’s actually a very common feature among similar fighting sticks. Nevertheless, for people who are only concerned about playing in the Switch, that’s something you can easily look past. 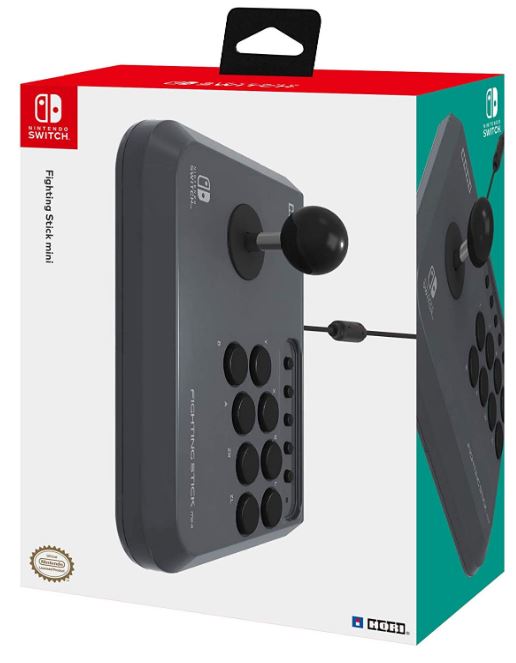 Who Should Choose the HORI Switch Fighting Stick Mini?

The Hori Switch Fighting Stick Mini is a good choice for a number of different scenarios. It’s a good choice for someone who’s interested in having a highly portable controller. A lot of different fighting sticks end up being large and unwieldy, occasionally requiring carrying cases to keep them together. By contrast, this is pretty much as portable as a typical console controller.

You don’t find deep customization here. That’s something you really have to start paying lots of money to be able to access, and it’s something that the target audience of this fighting stick probably don’t care about. You don’t need to be a pro to use the Stick Mini, you just need to be someone who likes to have fun playing fighting games on the Switch.

It’s increasingly common for fighting sticks like this to allow you to use them on multiple platforms, which isn’t the case here. This is basically just a robust mid-shelf fighting stick, making it pretty close to the kind of thing that Nintendo would make themselves. Which is probably why Nintendo certified this stick. In any case, for people looking for an affordable fight stick that’s worth using, the Mini is a great way to get absorbed inside your favorite games again.