A high-quality gaming headset is an essential part of any gamers rig. Between high quality audio and accurate microphones, these headsets help pull you into your game in a way that nothing else can. But if you’re on the market, you likely know that it’s not always easy to find a suitable model. Many manufacturers put form over function, focusing on stylish looks instead of high quality sound.

When Kingston released their first headset, it instantly became a hit. A company that was known primarily for their flash storage had produced something that left many famous audio brands in the dust.

With the release of the HyperX Cloud Revolver S headset, prospective buyers are wondering if this is the evolution of their hit product, or just them riding out their fame. We decided to go hands on, and see what this headset could do. 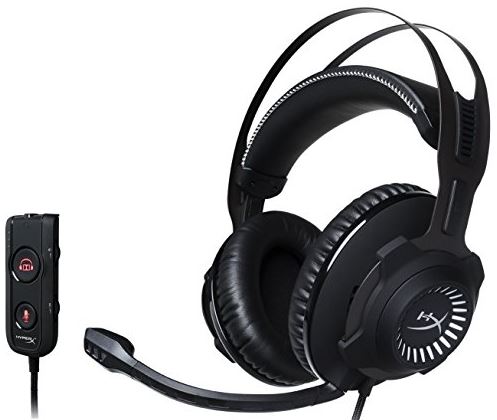 The Kingston HyperX Cloud Revolver S is one stylish looking headset. With an all-black design and plush percussions, it’s easy to see yourself wearing it. But with a built-in sound card, 7.1 surround sound audio, and memory foam earpads, it’s clear that this headset will be unlike anything you’ve used before.

When it comes to design, less is more. Sure, it’s easy to see the appeal of a bulky pair of plastic gimmicks covered in neon lighting and aggressive patterns, but that kind of look gets old very fast. Many elements of the Cloud Revolver S are simple. The flat black material, the sleek lines around the earcups, and the simple white accents in the center of the headset. But all of these elements give them a premium feel, making it easy to appreciate the design. 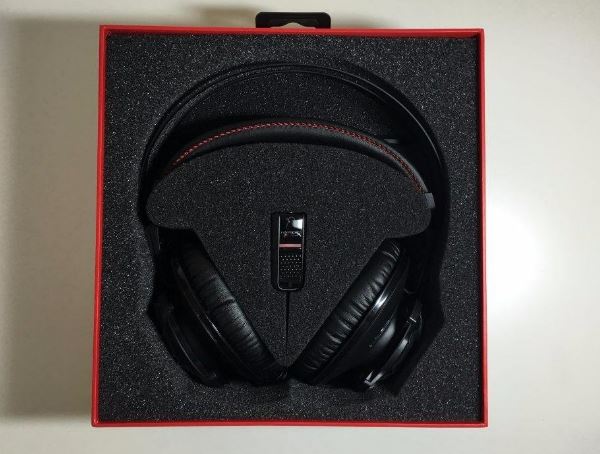 Even though nothing is ‘over the top’ fancy about them, you know instantly that they’re a premium product. Small changes like the fabric cable sheath and the exposed stitching on the headband really add to this effect.

The design is also highly functional. They’re easy to adjust to any head size. The microphone is easy to place exactly where you’d like. It only takes a few seconds after putting them on to get them arranged the way you want.

One of the things we really liked is how the controls are moved away from the headset itself. You’re not reaching up and fiddling around with controls you can’t see. Instead, they’re all placed conveniently on a cabled remote. Two large, LED illuminated buttons allow you to turn on Dolby surround sound, or mute the microphone. The volume of both the headphones and the microphone are controlled by two analog wheels on the side of the remote, which are quite precise. It’s easy to get the exact volume you want with just a quick movement of your finger. 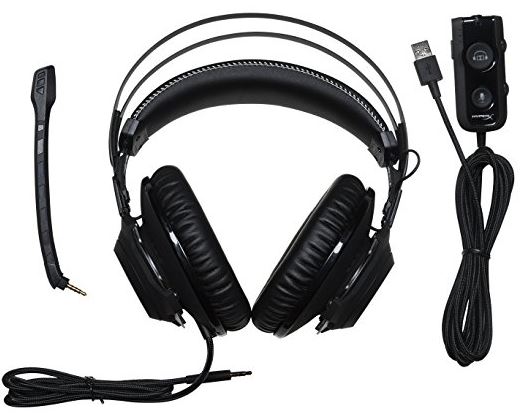 The HyperX Cloud Revolver S is built around a solid steel frame, but every part that touches your head is plush and comfortable. The wide headband evenly distributes weight across the top of your head, leading to very little pressure or discomfort, even during long gaming sections. The thick padding that surrounds the earcups is the perfect balance between firm and soft. The headphones hold themselves in place very well, but easily adapt to the shape of your head. 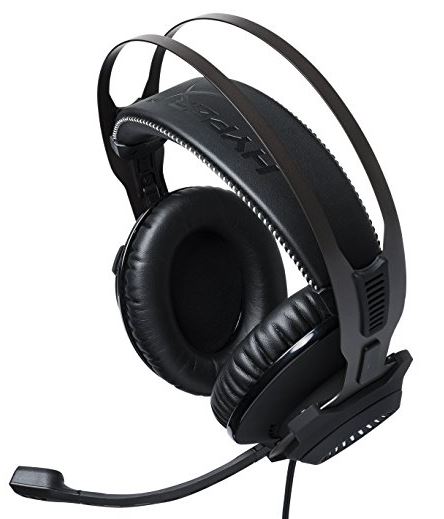 These aren’t your everyday headphones. They don’t plug into a 3.5mm port. These are USB headphones, with their own dedicated sound card.

The job of a sound card is to take a digital audio stream and convert it into an analog signal that the drivers can understand. When you get into the upper echelon of audio gear, you’ll often need a dedicated headphone amplifier. Since these are expensive, most manufacturers are restricted in what drivers they can use as they need to be compatible with your average, everyday audio output. Because Kingston went with their own dedicated model, they were able to beef them up quite a bit.

The virtual 7.1 surround is digitally encoded by the soundcard before it’s converted to analog. This drastically reduces noise and improves the quality of the surround. The part of the sound card that converts the signal to analog is specifically tuned for them, supporting the higher power and larger impedance of the drivers. 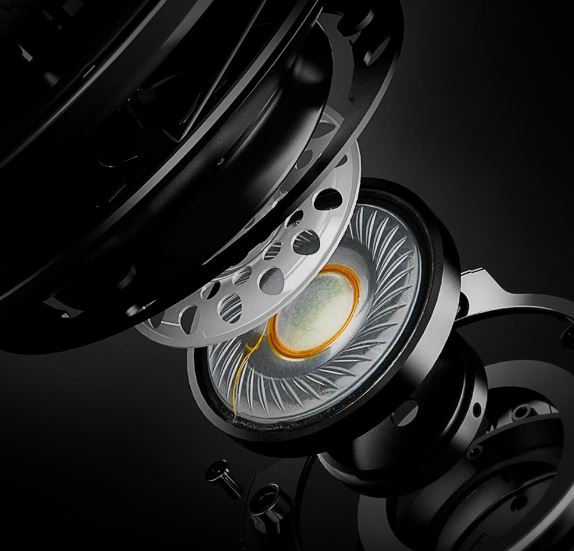 How does all of this come together? In short, the sound is very impressive. It’s worth noting that the surround sound isn’t true 7.1. It’s simulated. This allows Kingston to use very large, dynamic drivers, so you don’t lose any of the low-end sounds. Simulated surround works by delaying portions of the audio. Let’s say that you’re sitting in a home theater. If the rear right speaker plays a sound, it will hit your right ear first, then you’re left a split second later. Although the audio is transmitted digitally to the sound card in 7.1, when this audio is merged it’s ever so slightly delayed to simulate this effect.

The end result is something that sounds simply expansive. The soundstage is massive, and you really do feel as if the sound is coming from different parts of the world around you. If you haven’t used headphones like this, it might take a few minutes to get used to. But overall, the sound is very active and engaging.

The Cloud Revolver S has a very large amount of clarity. This is noted most in the highs. Sounds are sharp, clear and precise. Even subtle details are very well defined, allowing you to pick up on those subtle audio queues you’d miss otherwise. 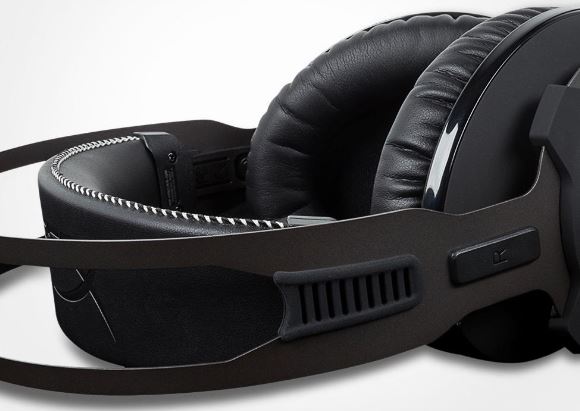 While these headphone aren’t the bassiest, they still have prominent lows that are properly accentuated for gaming. The low end sounds properly reinforce and add power behind sounds like explosions, or a punch bassline of the backing track.

Overall, it’s definitely one of the better gaming headsets we’ve heard. This sound isn’t our first choice for standard music, but it’s on a whole different level from standard gaming headsets.

The microphone is directional, meaning that it picks up sound coming from one direction and ignores the rest. This is where the long mic arm really comes into play. When you position it properly near your mouth, environmental sounds in the background seem to fade away, ensuring that your teammates only hear what you want them to hear. 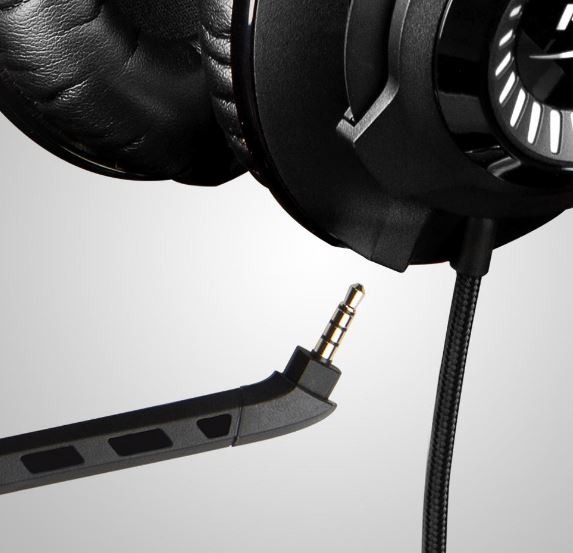 What we liked most about the microphone was the fact that it sounds a little reserved. Its smooth, well formed, and doesn’t come across as harsh or annoying when in-game. If you’ve ever had to listen to the shrill, intolerable sounds of a cheap microphone in a game, you know how frustrating it is. While you might not notice it too much, everyone you game with will appreciate the high-quality microphone on this headset.

One of the biggest selling points on this headset is the simulated surround sound. Without this feature, they’re acceptable. But with it, they’re several steps ahead of the competition. Unfortunately, you need a PC or a PS4 to take advantage of this feature. If you’re using an Xbox One, the headphones operate in stereo. For a long time, this was a common issue with the Xbox. But when Microsoft made the One S, they corrected the problem. Unfortunately, Kingston isn’t quite up to date with these standards, so Xbox owners will have to look elsewhere for their headset needs. 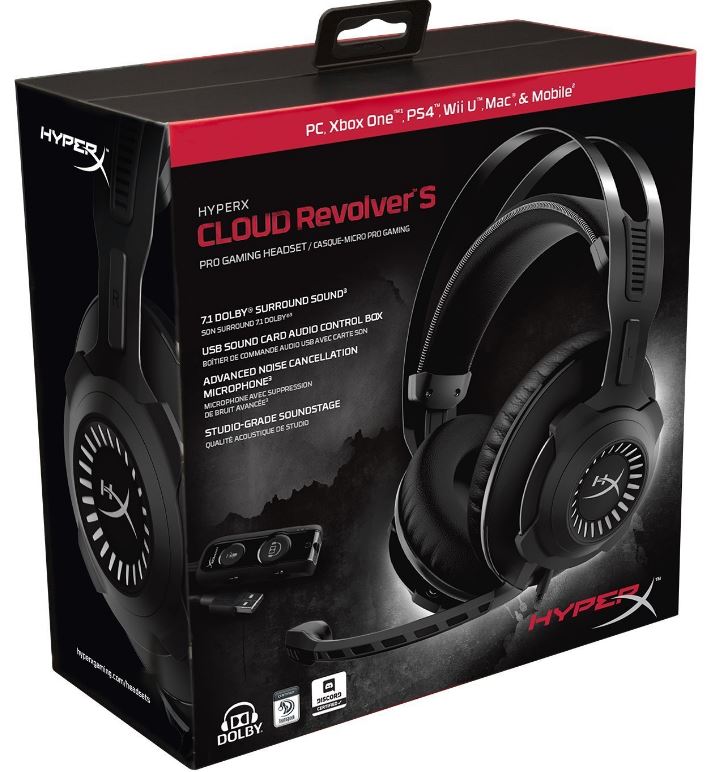 The Kingston HyperX Cloud Revolver S has a lot going for it. The high-quality build, stylish exterior, and plush padding make this headset a direct competitor to some of the top-tier headsets. This is the kind of thing we’d recommend to any gamer who wants a headset that can be worn for a very long time without any discomfort or risk of damage.

But once you try it on, what’s really going to sell you is the sound quality. Simulated 7.1 surround expands the audible world around you beyond the boundaries of the headphones, creating a stimulating environment that will help you take your game to the next level. Combined with crystal clear highs, well-articulated bass, and a smooth yet detailed mid-range, there are very few headsets on the market that perform quite as well as these ones.

Are they worth the money? In our eyes, absolutely. Sound is one of the most commonly overlooked part of your gaming experience. If you put your money elsewhere, you might be able to get a slightly larger monitor, a decent keyboard, or squeeze a few more frames per second out of your gaming computer. While all of these things are an improvement, none of them come close to the incredible realism you get with a good gaming headset.