Having a portable power station can be incredibly useful. Whether you’re worried about recharging your laptop or powering something a bit more substantial, there’s likely a power station suitable for your needs. But identifying that station can be a bit of a challenge. If you’re only trying to keep your phone alive, then you’ll need a different kind of device than the power banks used by someone who wants to run a small refrigerator.

The Explorer 500 offers a number of unique strengths. Not every strength is easy to appreciate. Some have to do with heat dissipation, for instance. But some of them are much easier to enjoy. For instance, when it comes to longevity, this power station puts a lot of competitors to shame. 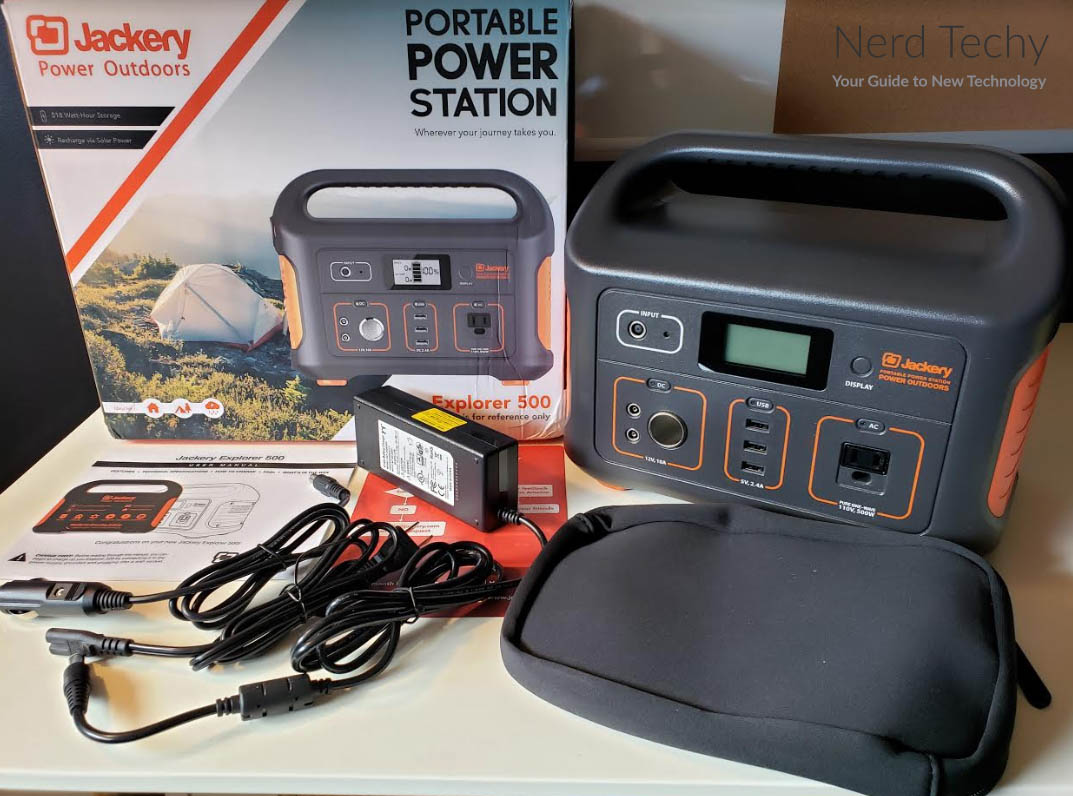 But the Explorer 500 does come pretty close to covering all your bases. It allows you to use about half a dozen different power inputs, supporting connections for smartphones, tablets, and even larger accessories. And as a 518Wh power station, this thing has no shortage of raw electrical current to provide. But how well does it work in practice? 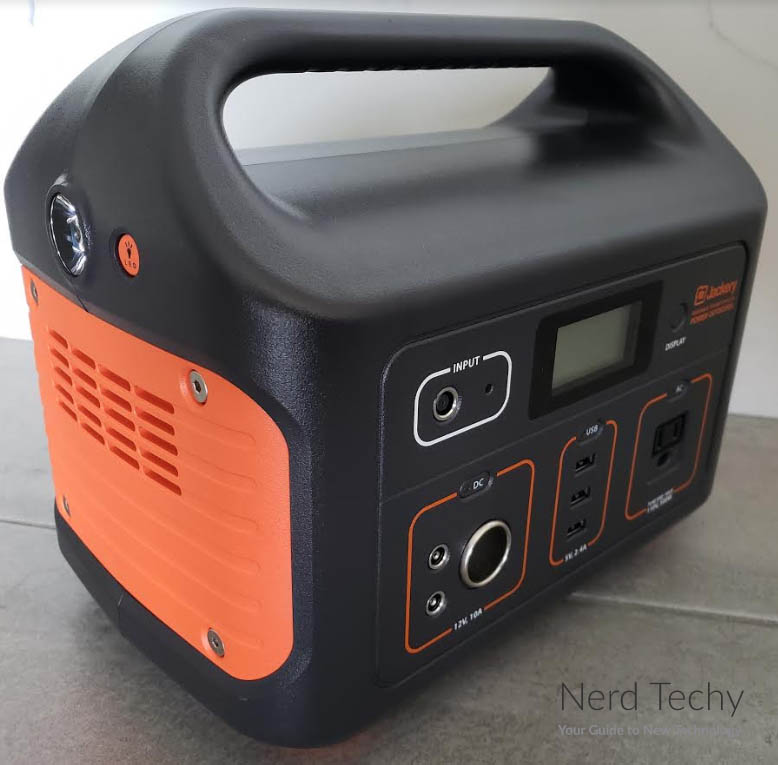 Considering how much power is packed inside of this unit, it’s reasonable to say that the Explorer 500 is fairly compact. It measures about 11.84 x 7.59 x 9.2 inches. That’s pretty much the same size as a handheld radio, or perhaps a larger Bluetooth speaker. The gray and orange chassis has a high-visibility design that seems like it would be welcome on almost any worksite.

Batteries are heavy. It’s pretty much an unavoidable fact about their design. In this instance, you’ll find the Explorer 500 weighs about 13lbs. That makes it a pretty hefty little device for sure. It’s almost the weight of two gallons of milk. Fortunately, the elongated handle on the topside makes it possible to get a good firm grip. Even for a younger person or an elderly person who needed to use two hands, it should be possible to get a nice stable hold on the Explorer 500. 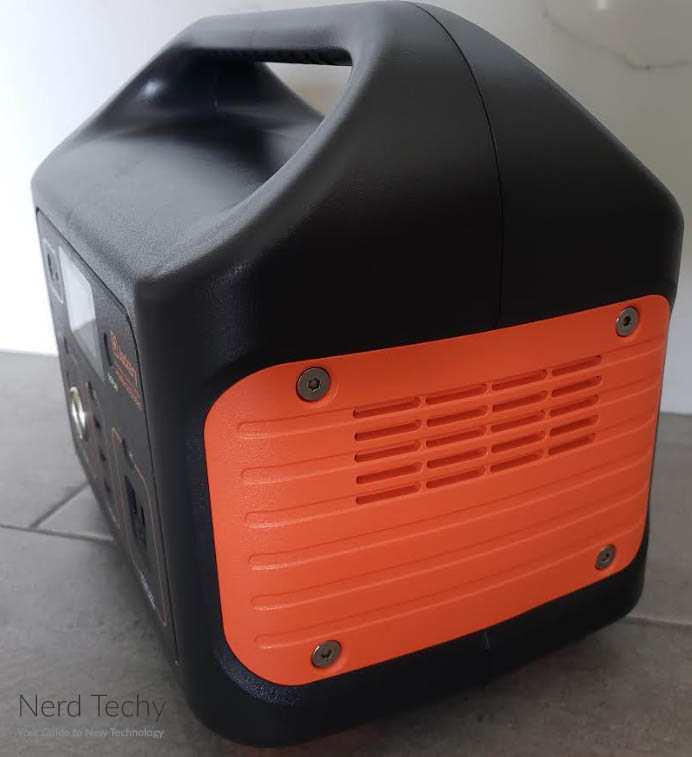 On the left side of the unit, you’ll find a large LED flashlight. They kept the light running at a modest 5W, so throwing it on doesn’t tear through the battery. Staying at 5W doesn’t sound like it would be very bright, but since these are high efficiency LEDs, it’s pretty good for a handheld flashlight. The flashlight also has a couple of SOS modes to flash and blink in an eye-catching manner. 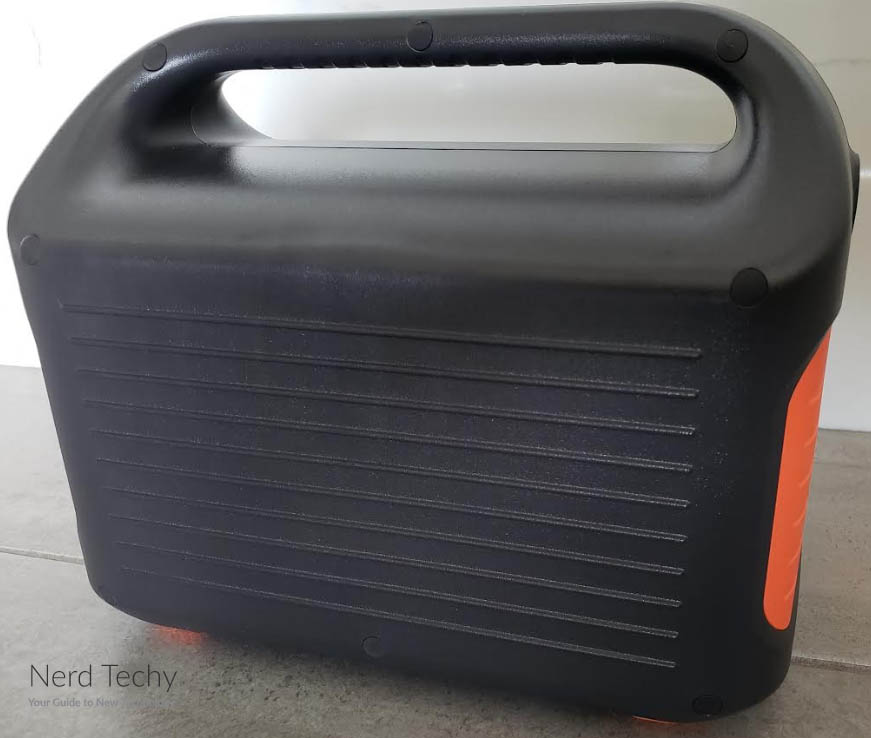 For port options, you’ve got a pretty big array at your disposal. On the front side, you’ll find three USB ports. Each use 2.4A output and the Type-A format. Past that, there is a standard AC outlet. For someone who wants to plug something into a wall socket, the AC socket is where you’ll want to direct your attention.

Rounding things out, there’s a 12V car charger port. Technically, you could stick a cigarette lighter in there and use this power station for that as well. But the general idea seems to be allowing you to use devices that require car chargers, without necessarily having to use a car. Pretty cool. 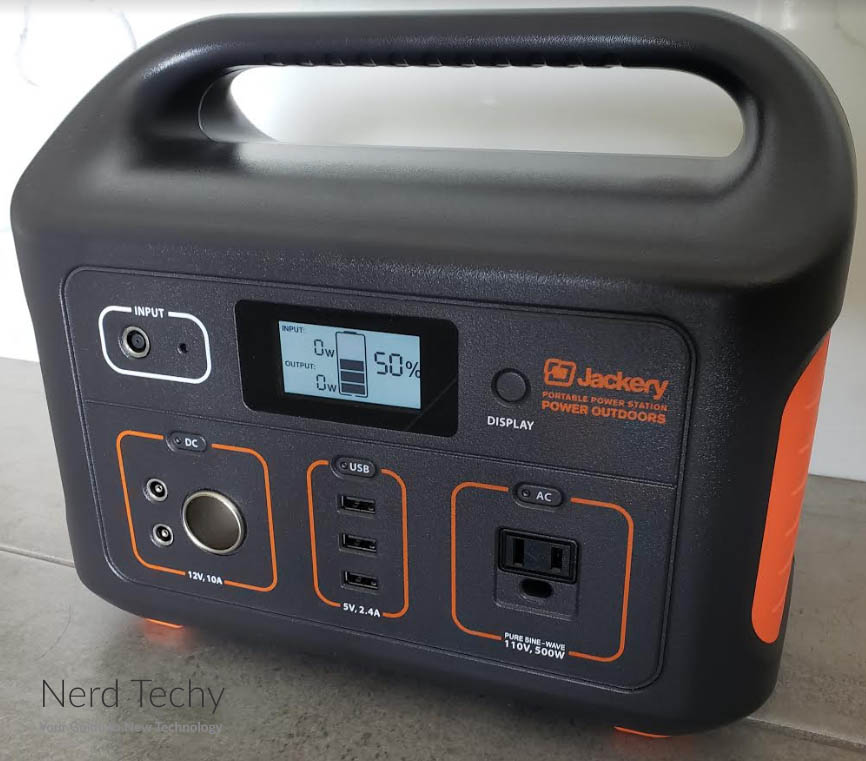 In any case, between all those ports, you can handle smaller appliances and most mainstream electronic devices without a second thought. That includes cameras, drones, laptops, smartphones, and so forth. You really only start to see limitations once you need a device to draw more than 500W, which we’ll look at closer in a moment. 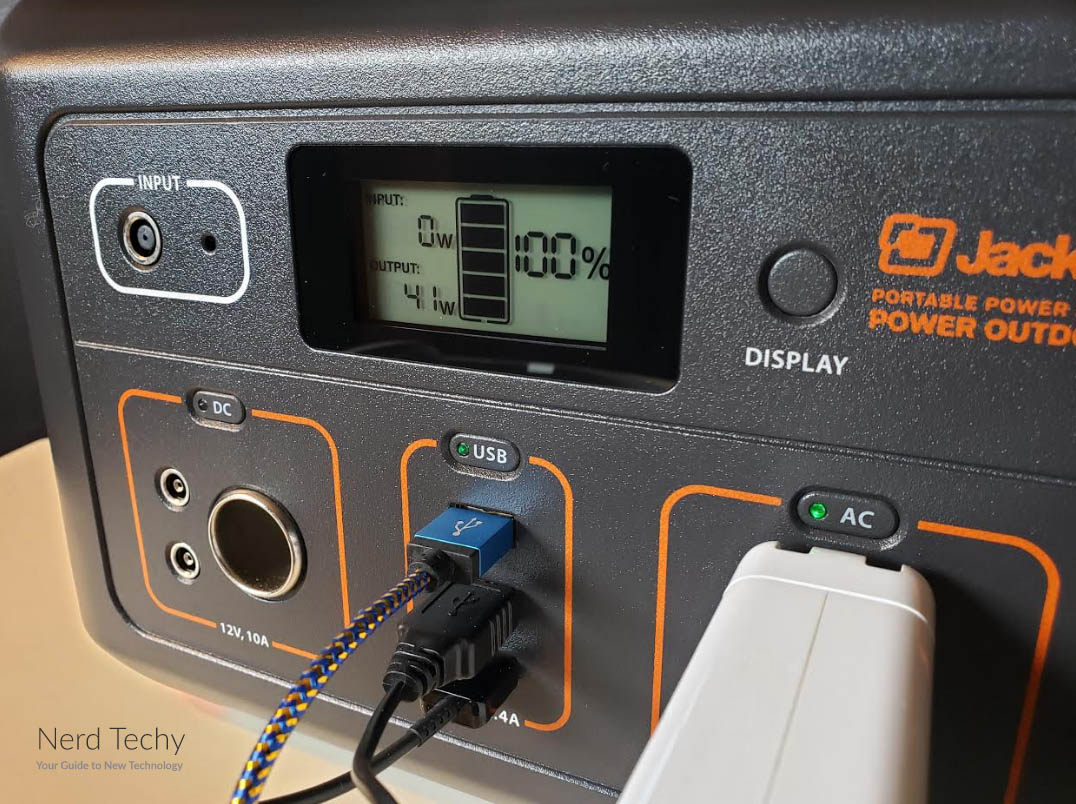 So where many power banks leave you guessing how much battery is left by only showing four small LED lights, or four small battery bar icons, this display is much more accurate. It also allows you to extrapolate how much time you’ve got left from the battery at any given rate of exchange.

Adjacent to the display, you’ll find a small round button marked “display.” It allows you to turn on and turn off the LED display so it’s not burning through power while you’re not looking at it. For a battery that’s expected to conserve power for days or weeks, that’s a pretty smart design. But the display draws so little power, you generally don’t have to beat yourself up if you forget to switch it off. The auto-off feature will help you out after a while, too.

One port we haven’t touched on yet is the input port, to the left side of the LED display. That input port is actually intended for a solar power connection. So if you want to recharge the battery using a solar panel.

Jackery designed the SolarSaga 100W to be used specifically in conjunction with the Explorer Series power stations. Although you must purchase it separately, it’s a wise investment if you truly want to go “off-grid” or utilize the power of the sun. 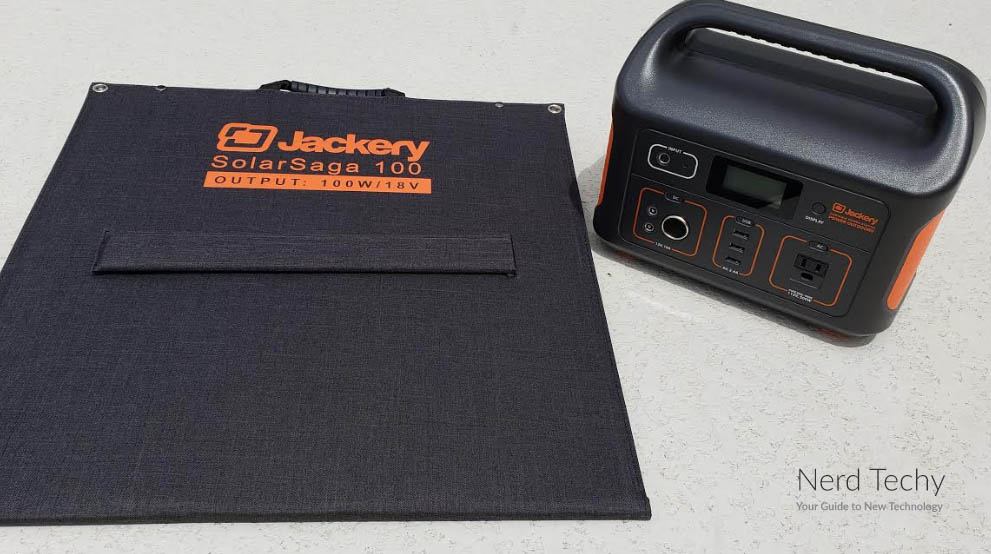 Built with a portable design, the SolarSaga is constructed with a nylon fabric shell and a snap-button enclosure that lets you fold it up for easy transport. When unfolded, the back has two kickstands that let you prop it up at an angle to capture the sun’s rays and convert them directly into usable power that’s store within the Explorer 500. Standing about 2 feet tall by about 3 and a half feet wide when setup, it’s not exactly small, but outside it shouldn’t really matter. However, weighing just over 5 lbs, it’s lightweight design and rubbeized handle lets you carry it like a suitcase wherever you end up. 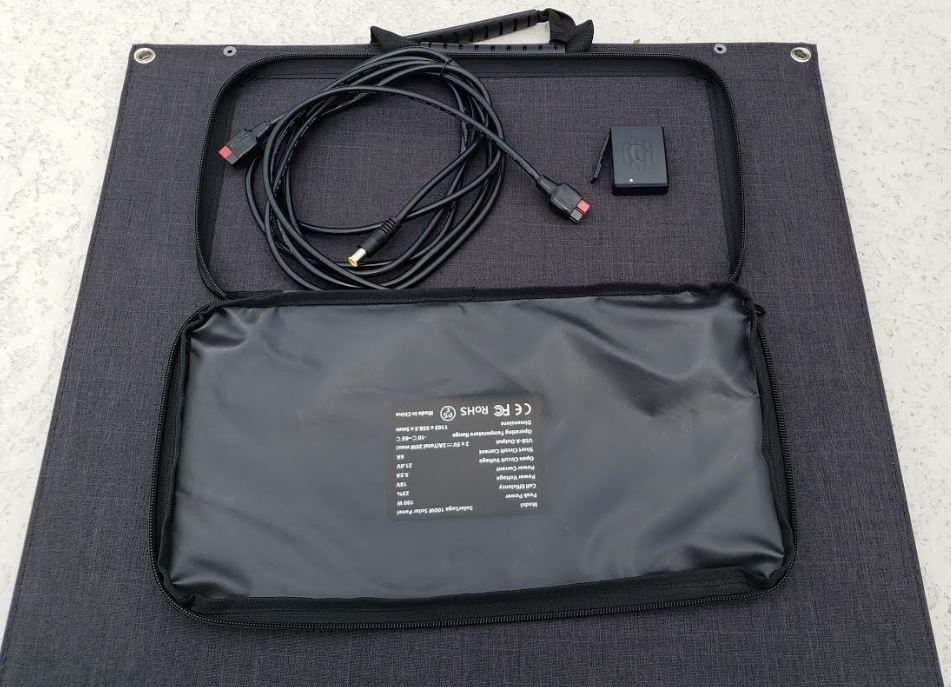 On the back side of the panel is a small zippered pouch that contains the connection ports for hooking it up to the power station. In addition, there are two USB ports that let you directly charge from the panel itself, right into your devices.

Although the SolarSaga is not waterproof, its built in a way that keeps it rugged enough to take with you to virtually any camp. There are a few things to keep in mind, however. One is that the direction and angle that you set it up can greatly effect its ability to capture sunlight. We highly recommend utilizing the kickstand design in order to point the panels as perpindicular to the suns’ rays as possible. Cloudy weather makes it much more difficult to be efficient whereas a bright and warm sunny day is ideal. 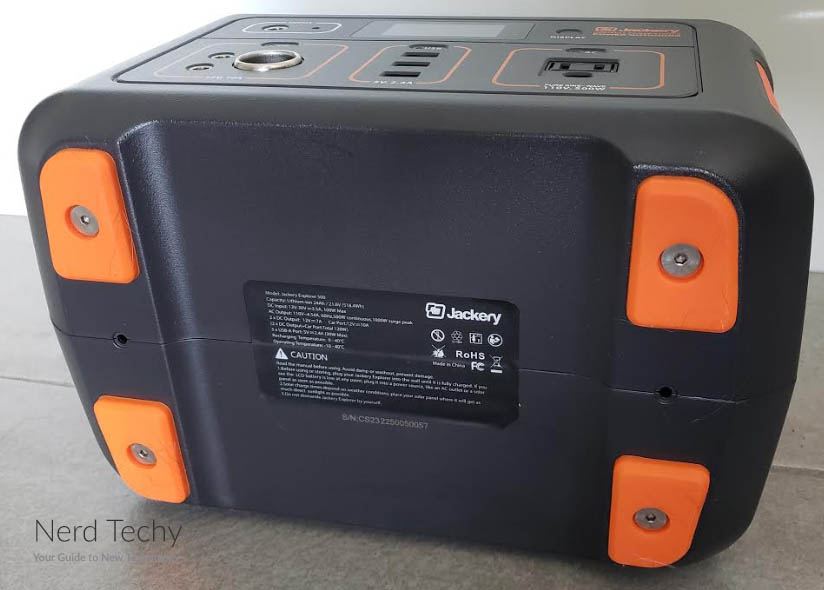 The charging capacity is 12V-30V, 3.5A (100W Max), which means once the battery is empty, it can take a while to refill. From a steady source of DC power, the total recharge time can easily exceed 8-hours. Basically, you have to plan ahead. When you’re recharging through a solar connection, outcomes will literally depend on the weather. But with some decently strong solar panels, and with the right weather, you can end up recharging the unit in about 14-16 hours.

The Explorer 500 runs a 144,400mAh battery, capable of 500W rated power alongside 1000W surge protection when using the AC port. That means you’re able to power basically anything except a larger home appliance on this device. 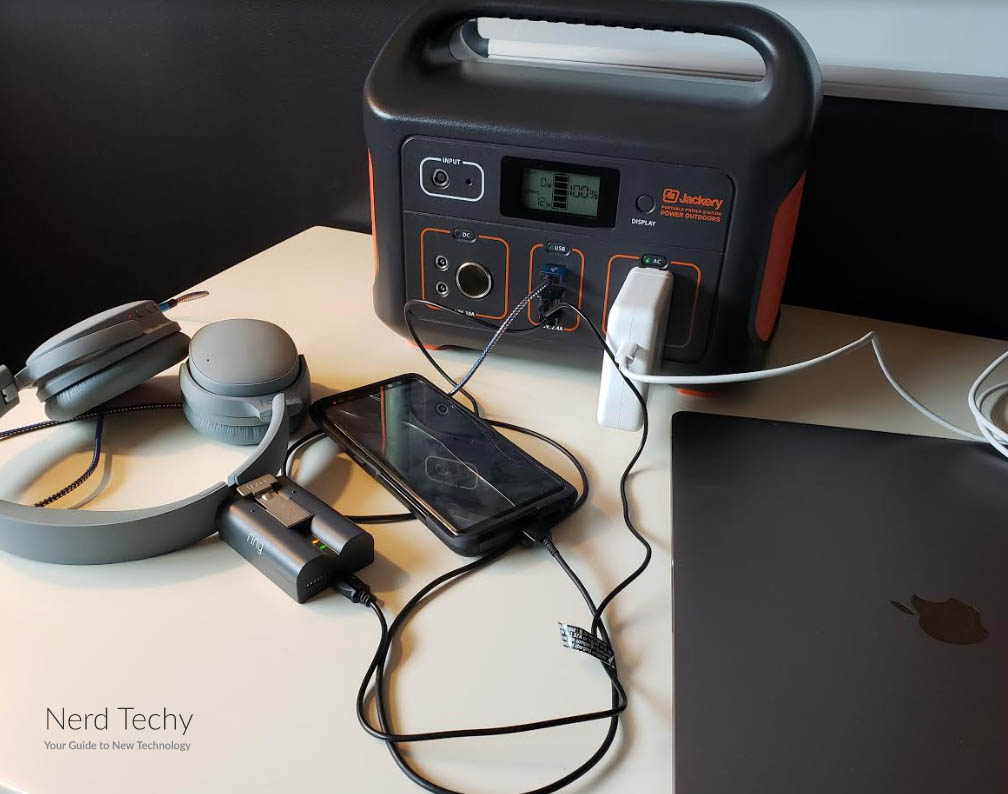 How long can you expect the Explorer 500 to last? The battery was rated to last more than 500 cycles before the battery falls to 80% capacity. After about 500 recharge cycles, you’re going to be looking at a steady decline in capacity from there.

For people who are making use of this battery constantly, that means you can anticipate perhaps four years of heavy use before the capacity begins to dip in an appreciable way. For someone who’s using the battery more infrequently, that estimate would be closer to six years. Even when treated very well, batteries are ultimately disposable, and vulnerable to natural decay over time.

How many recharges can you get from this power station? Well, that’s actually hard to predict. Because if you’re using more than one device, and you’re recharging multiple devices at different rates, then the amount of power you get will vary widely. But there are some rough estimations that can be made to give you a better idea of exactly how much juice is inside.

For a typical $250 drone, you can expect about nine recharges from the station. For a more powerful device like a 12” MacBook, you’re looking at about seven recharges. A large 5W LED might get 50-hours. Pretty good! Though you do need to keep the Explorer 300 safe with decent weather conditions. Below freezing or above 104F, the battery will not be able to perform to your expectations. 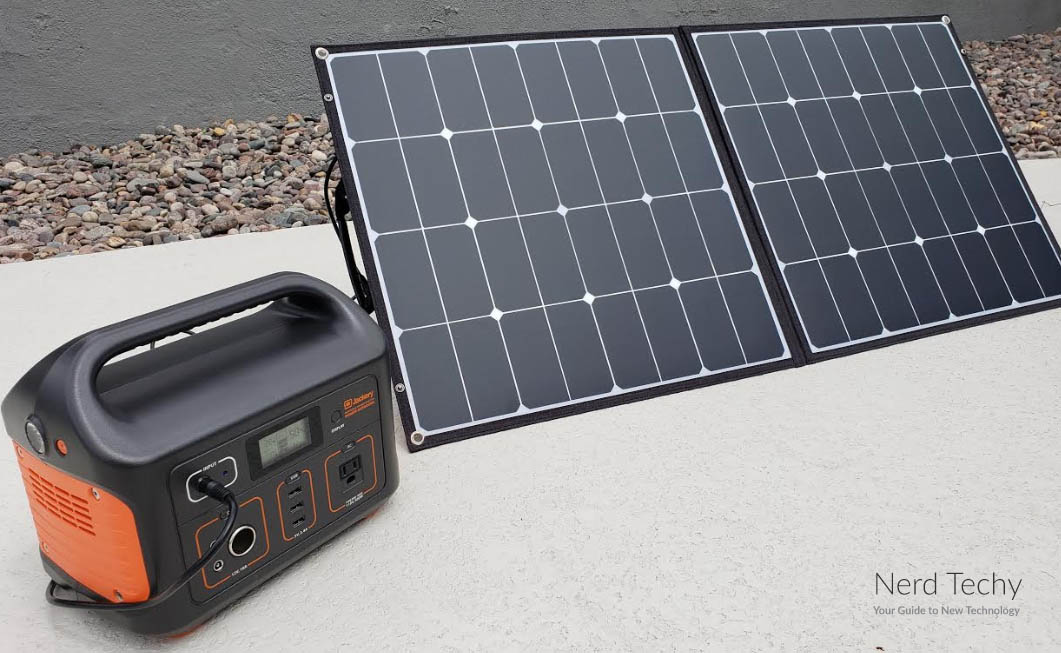 The Jackery Explorer 500 includes a 1-year warranty. For optional accessories, you could try adding a 100W SolarSaga Solar Panel or 60W SolarSaga, both would be pretty suitable for a power station of this size. Though the SolarSaga would have a harder time keeping the battery full if you were making heavy use of it. Also, you don’t actually need to use one of their solar panels to connect with this device because the connection is made with a standardized port. 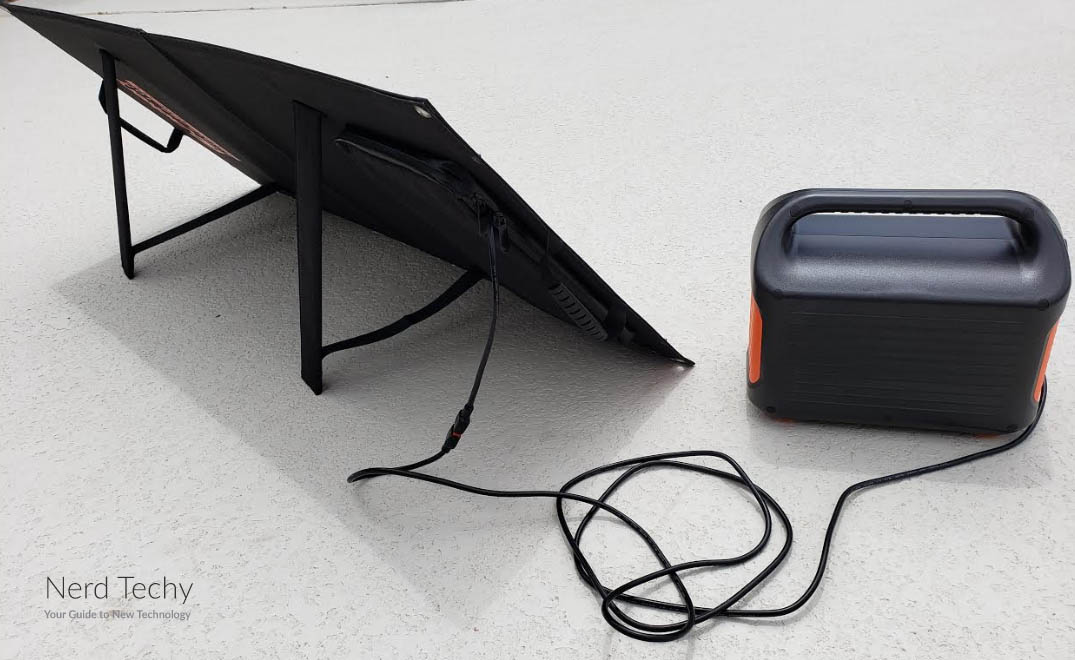 Who Should Choose the Jackery Explorer 500 Portable Power Station?

It might be odd to think of this as a power generator. It doesn’t really generate power, at least, not unless you end up attaching some solar panels to it. But in the right circumstances, this power station can do a lot of good. It’s got a huge capacity, and it’s not very limited when it comes to the kind of devices which can use it to recharge.

For inputs, you’ve got basically everything a person might need. USB slots, a cigarette lighter adapter, and a standard AC plug are at the core of almost any good portable power station. The fact there’s only a single AC plug might be a slight discouragement, but a single plug is fairly proportional to the power of this station.

Placed in action, these inputs perform pretty well. Each is made sturdy and ready to be connected and unplugged continuously. Though you have to be cautious with the weather, the Jackery Explorer 500 Portable Power Station should be a solid choice for someone who expects their battery to see a lot of shelf time.