In most cases, computers are bottlenecked by their hard drive. This is especially the case when you’re looking at HHDs with spinning platters. While SATA SSDs did a lot to help open those bottlenecks up a bit, the SATA interface frankly is still quite limiting on your bandwidth. And that’s where NVMe PCIe SSDs come into play.

The Kingston KC2000 is a continuation of ongoing attempts to blow-open the full potential of a PCIe based SSD. Here you’re looking at an SSD that’s using the latest Gen 3 x3 controller, allowing for wide compatibility and high bandwidth exchange. That’s essentially what makes it ideal for workstations, high performance computing scenarios, and even desktops. 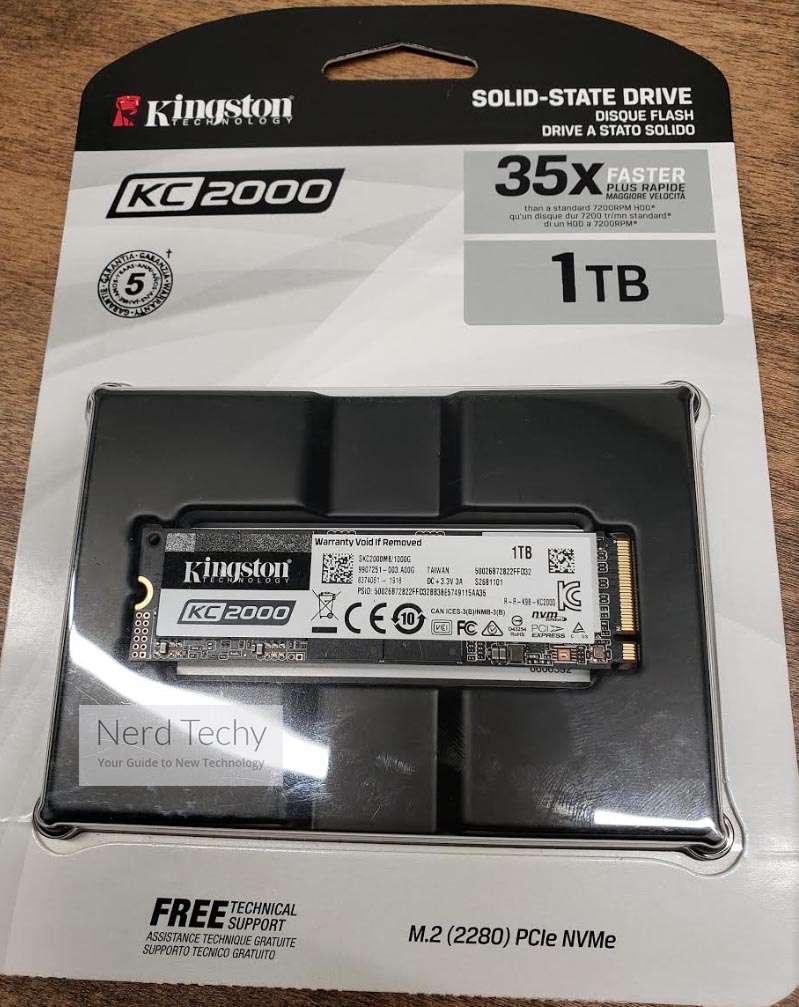 If you already have experience using SSDs, then you know these things are fast. What kind of people need drives that are even faster than this? Well, it really depends on your relationship to content creation and HD media. Even when it comes to gaming, you can find a couple of advantages to getting some speed improvements in these drives. Slower read speeds means your games will load a bit slower. Slower write speeds translate into more time spent moving data between your various data drives.

If you’re using a smaller file, like a 1080p movie, then you probably won’t be able to really experience a big difference between the KC2000 and an entry-level SATA SSD. However, when you turn your attention over to UHD content, the difference becomes far more stark. That’s because 4K content actually require as much as four times as much data storage as HD content. Along with the rising adoption rates of UHD content, that makes NVMe PCIe SSD drives a little bit more appealing with each passing year. 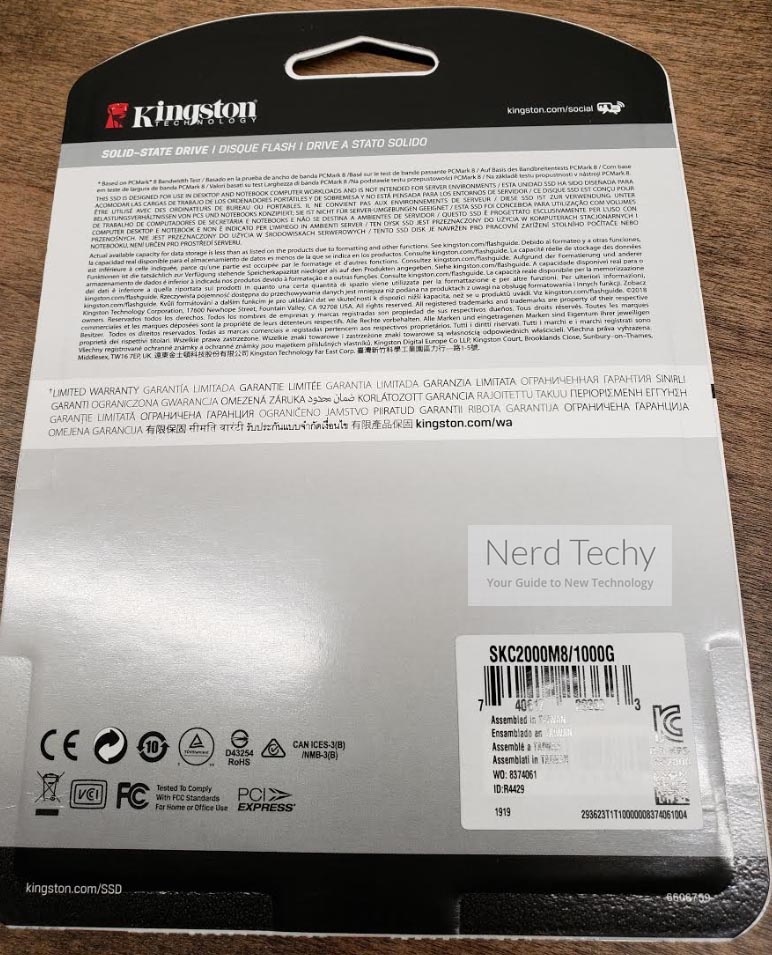 The KC2000 uses standardized dimensions for a 2280 form factor drive, measuring 80mm x 22mm x 3.5mm. That makes it fairly compact, though not more compact than basically any other drive using this particular form factor. In this case, you’re looking at form factor of 2280. That’s one of the more common options for PCIe SSD drives like the KC2000. Being fairly standard, its’ also easy to slip inside a variety of different protective shells.

SSDs don’t tend to have many remarkable physical features, and the Kingston KC2000 isn’t any different. Though it may be worth noting the power operation while idle is incredibly small, roughly 0.003W. While in operation, the average power draw is around 0.2W, which is also quite small. Though under maximum load, you’ll reach 2.1W while reading or 7W while writing, which can be a little heavier. Those low power draws are pretty much perfect for people who are trying to shove their drive inside basically any variety of portable electronics. Because the difference really can be felt when it comes to saving power. 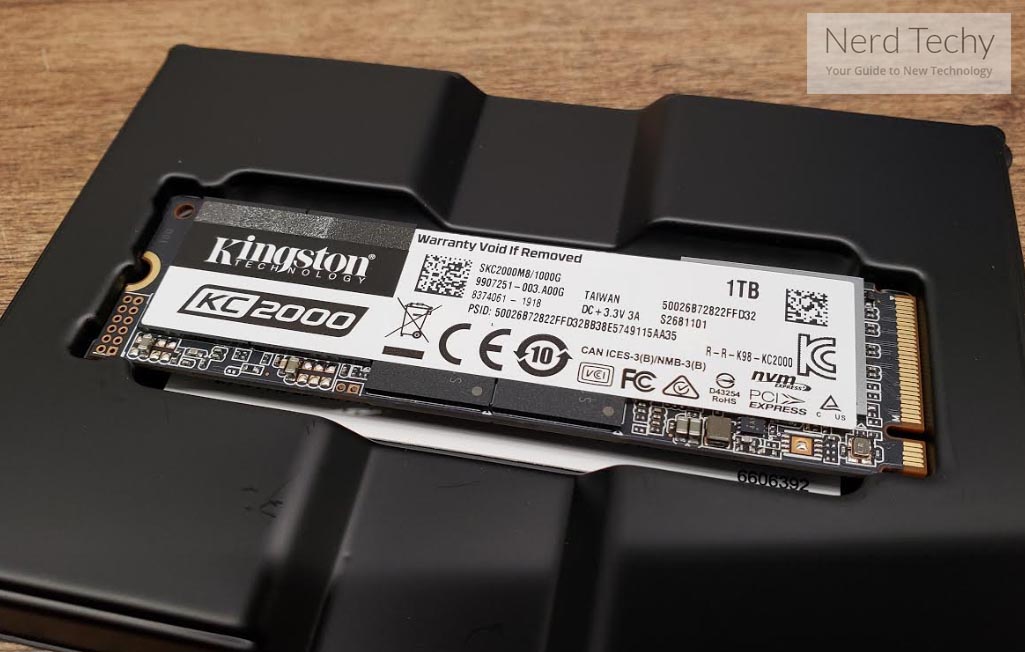 The KC2000 is available in four capacities. The first is a standard 250GB. The second has a storage capacity of 500GB. The third reaches 1TB, and the fourth capacity available reaches 2TB. Interestingly, the read and write speeds you get from this drive remain stable regardless of how much storage you have. So one KC2000 will perform basically as well any other.

Exactly how fast are we talking? Well, the KC2000 is capable of reading up to 3,200MB/s. For the sake of comparison, an entry-level SSD reads around 500MB/s, which is around six times slower. Things don’t look that much different when you look at the write speeds, either. You’re actually looking at write speeds reaching out towards 2,200MB/s. Again, for the sake of comparison, an entry level SSD like the A400 would be able to provide closer to 450MB/s.

That’s nearly five times as fast. All in all, that makes the KC2000 the fastest Kingston SSD out there right now. It would be safe to say these speeds are essentially future-proof. Not only are they able to hold their own against 4K content, they’re able to do reasonably well when faced with giant 8K recordings as well. Though that’s only in reference to their ability to read/write the content. Actually storing 8K content could be quite challenging, especially for people who were using one of the drives that had less than 2TB of total storage capacity.

For a lot of people, this drive will perform no better than an entry-level SSD. People who are only interested in checking their email or playing games don’t really need something like the KC2000. Even people who are using 1440p content really don’t need to take advantage of these kinds of speeds.

If you’re already using an SSD for your operating system, switching over to a drive like the KC2000 isn’t going to help your PC boot faster. Because even with a pretty basic SSD, those processes are being bottlenecked somewhere outside of your hard drive. So who should use something with this much power? There’s basically three answers to that question, but we’ll answer that a little later. 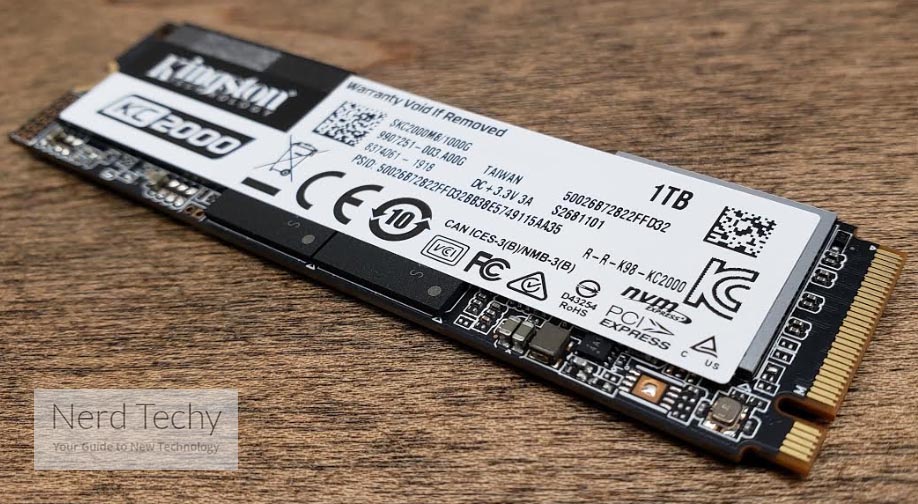 Among the many components that make up a PC, the hard drive is among the most likely to eventually break. When drives die, data gets lost. When you’re choosing RAM, it can make sense to try and save a few bucks by running with an off-brand. But when you’re choosing storage drives, you typically want to go with something as reliable as possible. Because again, your data is typically what’s on the line. Not to mention the inconvenience of having to set everything up all over again after losing your operating system.

The KC2000 is supported by some basic Kingston drive software, which helps you manage the drive. It’s nothing you can’t get online for free from another developer, and it’s mostly making use of basic Windows utilities that can be accessed without the help of software at all. But for novices who don’t necessarily know how to check the health of their drive, this kind of software can be nice to have. Especially when you don’t have to go out of your way to find it, and when you know it’s going to work with the KC2000. 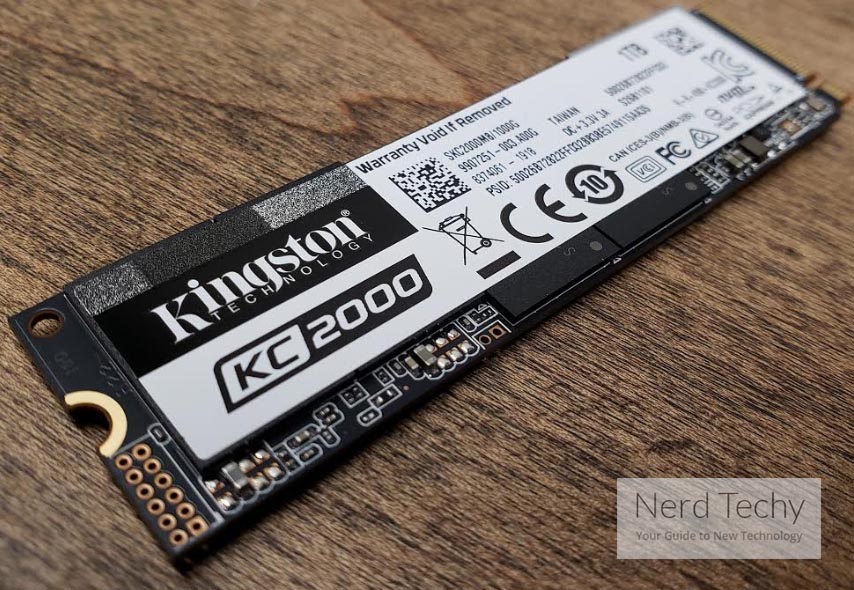 Interestingly, one of the best reasons to swap over to an SSD is for their longevity. Though longevity actually used to be a weak point of these drives, the technology has greatly developed over the past eight years or so. Provided you don’t go out of your way to abuse your drives, you can typically expect these things to last the better part of a decade.

Which means when it comes to lasting power, what you really need to be concerned with is the storage space of your drive. How big will 2TB really be five years from now? Maybe not very much at all. So ultimately it’s tough to make good predictions about the longevity of these sorts of devices, especially because SSDs are still getting much better with respect to their overall storage capacity. But it’s probably safe to say that if you don’t get a defective drive, you can anticipate at least a decade of use.

Kingston actually expects the KC2000 to survive decades under optimal circumstances. But again, whether you actually get your drive to last that long partially depends on how you treat it. If you’ve got a case with very poor cooling, and you’re running some large GPUs that are constantly dumping tons of heat into your case, then you’ll probably see a little bit of the lifespan shaved off of everything in your case. That includes your M.2 drives. 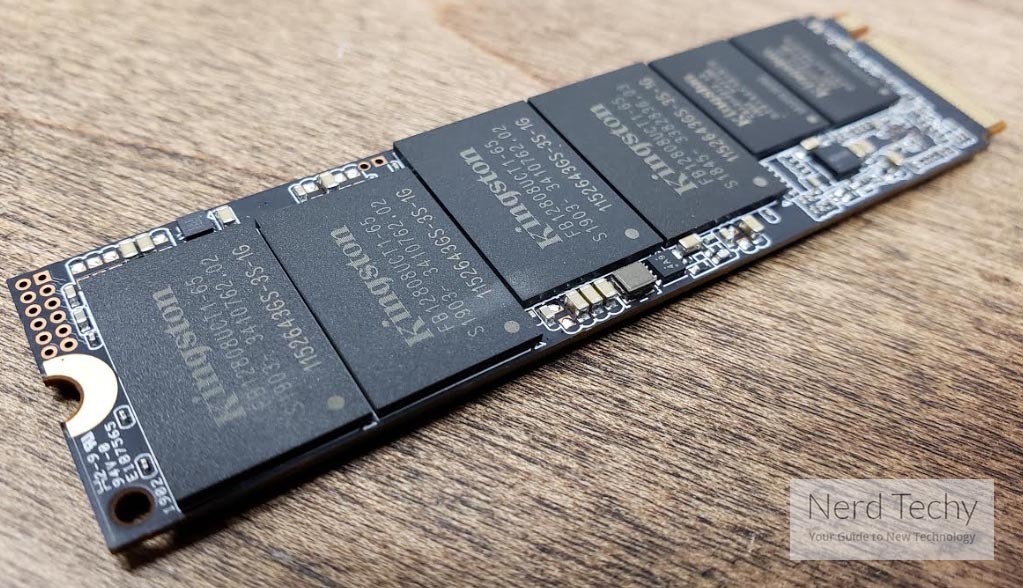 Kingston provides tech support as needed, in a wide variety of different formats. That includes some reasonably good self-help materials so you can solve your own problems, US based phone lines, and so forth. Though the KC2000 doesn’t come with a bunch of extra stuff, it does include a 5-year warranty from Kingston. And being one of the larger names in electronics, a warranty from Kingston actually means something. 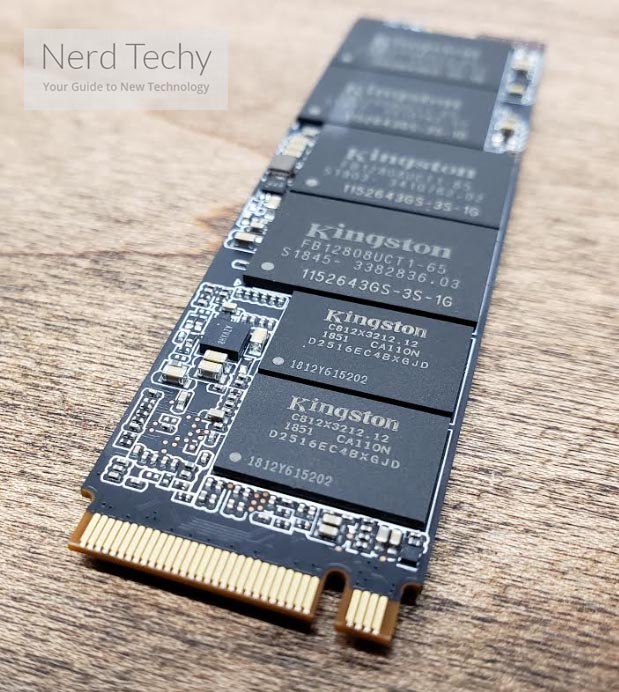 Because this is a PCIe SSD, you don’t need to be worried about providing SATA cables. In fact, you don’t have to deal with cables at all, which is probably pretty great for people who aren’t experts at installing hardware inside PCs. Installation for the KC2000 is essentially plug and play, virtually no more difficult than installing a stick of RAM. Even the drive itself has a more than superficial resemblance to some RAM.

Who Should Choose the Kingston KC2000 NVMe PCIe SSD?

There are basically three groups of people who might want to take advantage of the Kingston KC2000. The first group are professional video editors, who routinely work with enormously large video files, and can immediately benefit from the kind of read/write speeds the KC2000 is capable of deliver when it comes to rendering video. If you need to write/record video content, especially 4K content, these speeds should definitely appeal to you.

The second group are media-fans who have tons and tons of digital movies. For instance, you might be a cinephile. Once again, it really matters if you care about 4K content or not. If you’re a big fan of the 4K format, you’ll absolutely be able to see some real improvements in speed and performance using the KC2000. If you don’t touch 4K content in movies or in games, then you probably would be better served with a simpler drive.

The third group are enthusiasts. An enthusiast doesn’t need any special reason to have a powerful PC, they just want to have a strong system because they love their PC. It’s not totally unlike people who are really into working on cars who want their car to be able to drive at 150mph, even though they probably won’t be doing much of that in their day to day lives.

If you’re a PC enthusiast, a 4K gamer and movie lover, or a professional content creator, then the KC2000 is probably an excellent choice for your build. If you’re looking for the best bargains you can possibly find, then it probably won’t be.