While many new devices lean on smart technology in order to make their functionality more accessible, Knocki seeks to overhaul the entire process. For example, a smartphone can act as a streaming and control hub for your home theater system, pet tracker, thermostat, security camera and even your alarm clock, all at the same time. It offers smart updates and quick access to functions built into their respective apps.

Knocki’s Kickstarter campaign points out that rather than picking up your phone, navigating through menus and selecting a smart function, all of this can be accomplished by a series of knocks or taps on any hard, flat surface. There are many other advanced and useful features made available by Knocki, and the hardware has already been developed to do it, as well as a completely open source API. 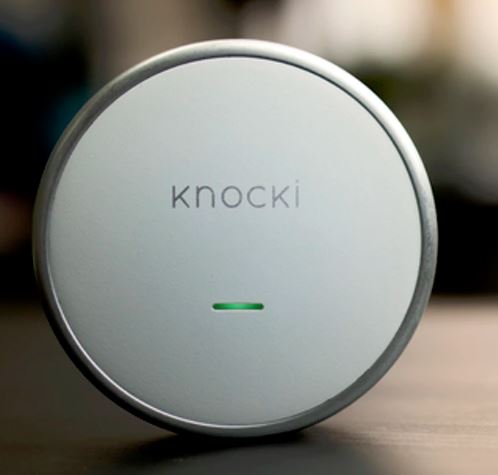 The purpose of the campaign is to provide greater access to devices like Sonos speakers and direct HTTP communication. The latter could potentially bypass a device’s API for cloud service, or the technical expertise required to integrate with various firmware. A certain portion of their funding is also going toward providing a black colored version of the Knocki, as an alternate to the standard white and gray model.

Knocki doesn’t pick up sound vibrations. This answers a big question many people have, in that a particular sound won’t trigger any unwanted functions, like calling the police from your home security system when there’s a knock at your door or something. 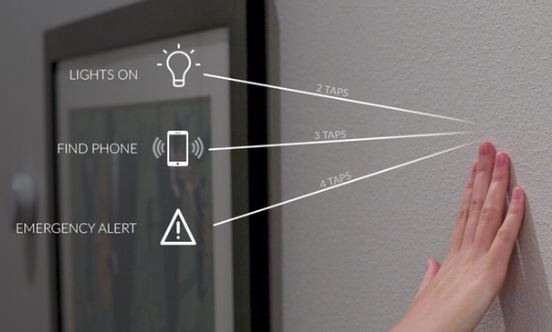 It’s also capable of discerning how many taps you make on a particular surface, whether they’re made quickly or slowly, abruptly or softly. A set series of knocks on your selected surface can be programmed to make a gesture, and a function associated with it.

You can save up to 10 custom gestures, and they can be as simple or complex as you choose. For example, one knock followed by a pause and then another knock could trigger your thermometer to a selected temperature for you home. It’s not only capable of understanding pauses between a series of taps, but requires one simple action – knocking – and it can understand very specific commands.

The beauty of this, is because of IFTTT technology and one-step the functionality of many smart devices, you can completely bypass physical dependency on your smartphone. This way, you can have a saved gesture perform multiple actions at once. Examples of this are dimming your lights and playing a specific playlist of music, or turning off all the lights in your home, setting your home’s temperature or locking the doors and activating your alarm system. 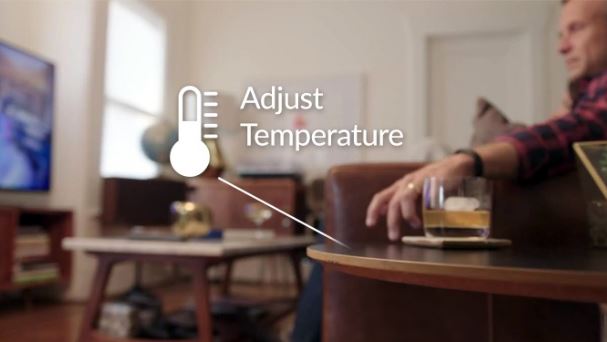 Knocki’s SurfaceLink technology is also capable of discerning between deliberate and accidental or environmental taps, which is useful for simple gestures of only a few knocks.

Setup is a major hurdle for many people, and while there’s a software setup protocol discussed in a later section, the hardware is intuitive and simple. For starters, it’s to be placed directly on, under or behind any flat, hard surface, such as behind a door, under a table or on an entire wall. It can also pick up taps from several feet away, which expands its versatility for each room. 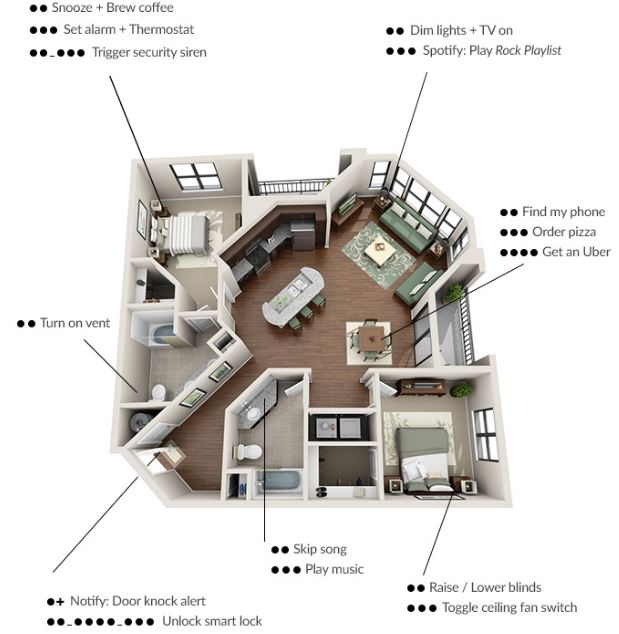 You’re given two options for physically installing it, including a replaceable 3M adhesive tape to simply stick it on, and you’re ready to go. For a more secure and permanent setup, there’s also a screw-fastener mounting option that takes very little time and requires nothing more than possibly a drill and a screwdriver.

Beyond that, there’s also a AAA battery requirement. Before thinking that it’s much harder to work with than a rechargeable battery option, you can purchase rechargeable batteries for it, and this also makes it completely wireless. There are mercury-free Duracell alkaline batteries included, which will deliver about an entire year of service (12 months), so it’s not much of an inconvenience overall.

Knocki doesn’t use Bluetooth and relies exclusively on WiFi, so without this you won’t be able to use it. Its setup also requires a smartphone at first, either Android or iOS, in combination with the free Knocki companion app. This allows you to sync your smart devices, create custom gestures and set them up to carry out your desired commands. 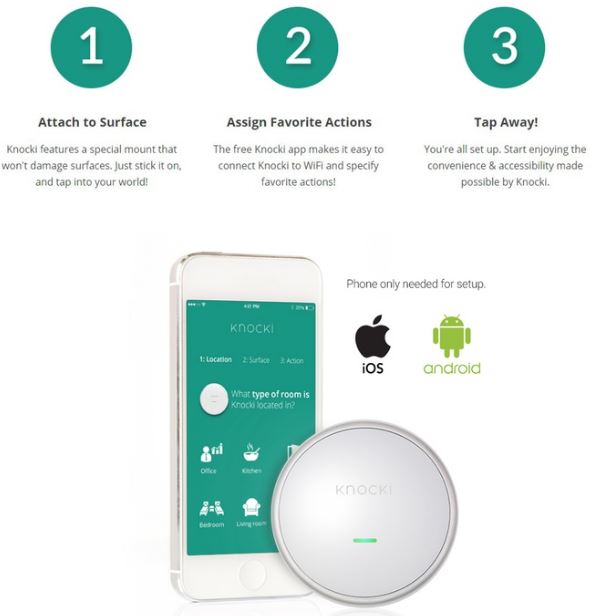 In fact, once you’ve connected to internet and synced to your favorite devices, you don’t require so much as a smartphone or tablet in your home for full functionality. One of the positive aspects of using WiFi exclusively is that it gives you access to Cloud services, which allows you to control synced devices from anywhere in the world, however this is limited in some ways.

First, because APIs must provide access to these services and many of them aren’t open source, you can’t even custom program functionality for them. On the other hand, Knocki is compatible with all IFTTT enabled devices which includes a vast majority of the smart devices you likely use. Some of the current compatible platforms includes:

As you know, a portion of Knocki’s funding is being dedicated to HTTP connection technology, which will remove the barrier between it and other devices’ APIs. A positive aspect to this is, because your smartphone can use both Bluetooth and WiFi, it still acts as a hub for all of your devices. This provides access to Knocki with a potentially very low barrier to entry across all devices.

For those devices that do have an open source API, Knocki is fully compatible and programmable, however you may be limited by the programming languages available for the devices that you’re working with. In other words, you can create accessibility functions of your own, for any platforms in this category that aren’t already supported by Knocki. This may seem very complex and too much of a headache, however a community of Knocki users who are looking for many of the same functions could mean a huge benefit. 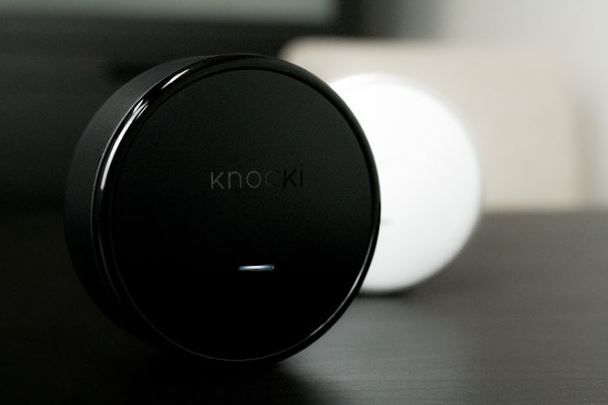 By taking advantage of the developments of other users, you’d be able to plug and play the custom functions written by other users, and at the very least it makes it very versatile in terms of performance. Also, because the Knocki developers have so much expertise in this area with their ever-expanding list of supported platforms, it’s been designed to integrate smoothly for you, making it pretty easy to work with.

As you know, Knocki does rely on a select amount of software and hardware for setting up and using the functionality of many of your smart devices. On the other hand, it works entirely on its own as a remote control device, and looking beyond its advanced knocking and gesture capabilities, there are still unanswered questions about its structural integrity. 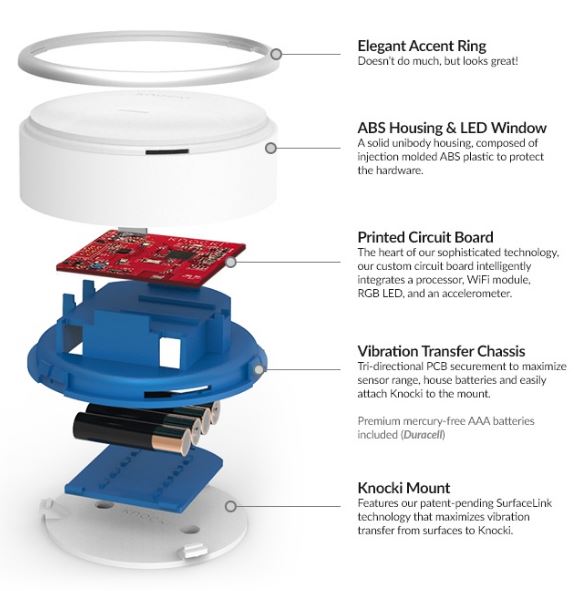 As you probably know, it relies on some pretty sensitive circuitry in order to operate effectively, including a processor, WiFi module and an accelerometer. This is all housed within an injection molded ABS plastic cover that features an accent ring along its outside edge. There’s also an RGB LED to display its status via a small window in the cover.

Underneath that is a vibration transfer chassis to increase the sensor’s effectiveness and house the batteries. An important aspect of the chassis’ design is the use of a tri-directional detector switch with PCB style termination for greater sensor range.

The mount plays an important part as well, because it increases the vibration received from a given surface and transfers it directly to the sensor. Because of this attention to detail, it works on virtually any hard surface without any other requirements for where you place it.

In terms of durability, because you’re not physically handling it during use, it sustains little to no harm from that type of interaction. At the same time, it has a soft finish and looks nice in your home.

The technology used in Knocki is straightforward and quite intuitive. However, it’s worth mentioning that not only does it provide an effective ease of use method to using all of your smart devices, but it works better than many other solutions of its kind. It by no means replaces the usefulness and desirability of your smartphone, however it’s a relatively small investment for a better way to communicate with your devices than voice control, or many other methods. 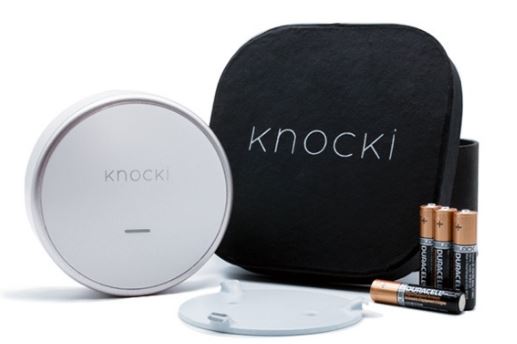 That’s a great accomplishment. While the ease of use features you’re already using are generally free and come stock with any smartphone, they’re in no way as simple or effective as Knocki.

As the limitations between devices diminish, and this wave of interconnectivity started by technologies like advanced Bluetooth evolve and become more readily available, its desirability can really only increase. At this time, it’s a lot more useful for tech-friendly, hobbyist level programming users, however its lifespan and effectiveness definitely give it an advantage in this area as well.