After air, water is the most basic of human needs. While humans can survive, unhappily, for multiple weeks without food, we can’t last for more than a few days without water. While estimates show close to a billion people lack access to regular sources of clean water, this tremendously necessary resource gets taken for granted by much of the developed world.

Though we have access to some of the best public water systems in the world, our water supply isn’t completely free of contaminants. Many people choose to bring water with them or purchase plastic bottled water. In an effort to drink clean, convenient water, we’ve buried ourselves and our landfills in single use plastic bottles.

Though many don’t give a second thought about purchasing or tossing an individual water bottle, the collective statistics should give anyone pause. We use 20,000 plastic water bottles every second. That works out to one million bottles per hour and a staggering 480 billion bottles every single year. While different types of plastic degrade at different rates, estimate show bottles may last 450 to even 1000 years! Many communities have taken extra steps to improve recycling efforts, but the fact remains that a very large portion of plastic bottles will end up in landfills where they will remain for centuries to come.

The LARQ Self-Cleaning water bottle looks to provide owners with a simple, eco-friendly way to ensure access to purified water in a clean, fresh bottle. Let’s explore what the LARQ has to offer and we’ll see if the benefits are crystal clear. 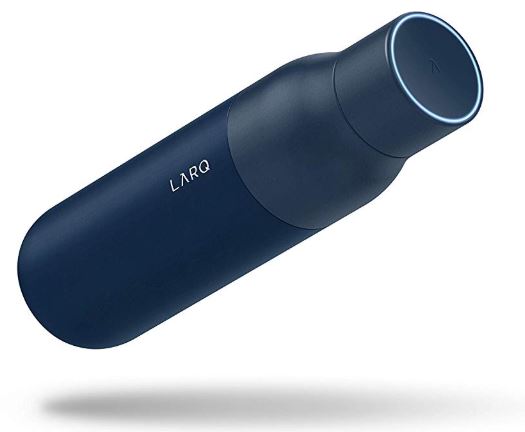 While reusable water bottles are nothing new, they haven’t exactly halted the flood of disposable plastic.

LARQ conducted a survey to find out why people don’t like using reusable bottles. While most of us would prefer not to cause long term environmental harm, that eco mindset seems to stop when we feel inconvenienced. Survey respondents’ most common issues focused on reusable bottles being difficult to clean and developing unpleasant smells. Additionally, many felt that they preferred bottled water because they knew it was purified.

The LARQ bottle hopes to overcome all of those challenges. Constructed of BPA free, polished stainless steel, the LARQ bottle holds 18 ounces of liquid and measures 9.1 inches tall with a 2.7 inch diameter. Given the additional internal parts, LARQ weighs a bit more than traditional bottles at about 13 ounces. 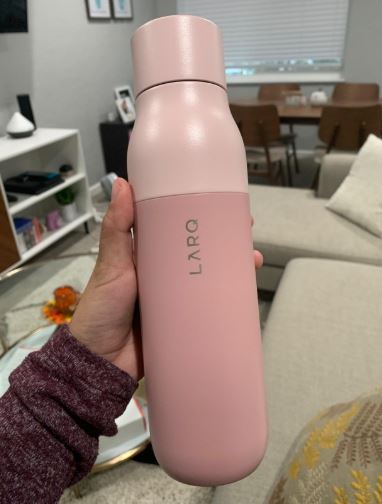 Stylistically, the LARQ has a simple but classy look with dual textures on the exterior. The bottle tapers slightly toward the lid but keeps a wide opening for easy grip and cleaning. You can select from 5 different colors: Obsidian Black, Monaco Blue, Seaside Mint, Himalayan Pink, and Granite White. The black and blue are deep, dark colors while the mint, pink, and white look soft and muted. Everyone should find a color they like with the variety of choices available.

With an 18-ounce capacity, we felt that the LARQ was just slightly small. Expert recommendations range widely, but generally advise drinking 60-100 ounces of water daily, if not more. Based on those numbers, we’d need to re-fill our bottle quite a few times compared to other popular bottles that hold 24 to 32 ounces. Aside from extra filling, we did appreciate the smaller size that would fit more easily into a cup holder. 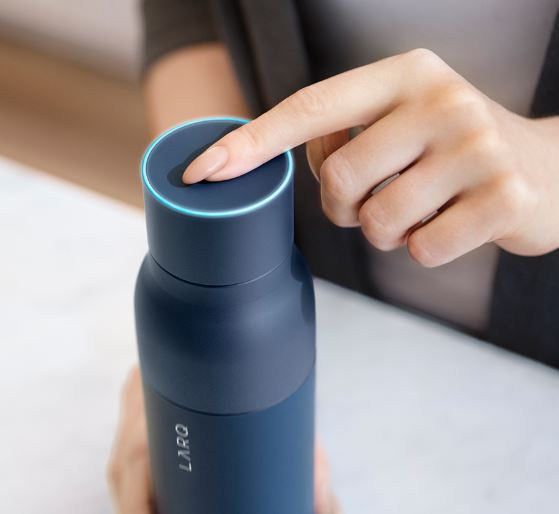 Here’s where the LARQ really gets interesting. While the exterior looks like any other run of the mill stainless steel water bottle, LARQ’s lid contains an LED that emits UV-C light.
We’re most accustomed to demonizing UV light for its harmful effects on our skin, but LARQ has found a positive use for these damaging rays. Just as UV-C light damages our skin cells, it also has the power to kill viruses, bacteria, and other bio-contaminants extremely effectively.

By pressing the button on the top of the lid, you activate the 280 nanometer UV-C light which LARQ claims neutralizes up to 99.9999% of bacteria and 99.99% of viruses using the high-powered Adventure mode in just 60 seconds. 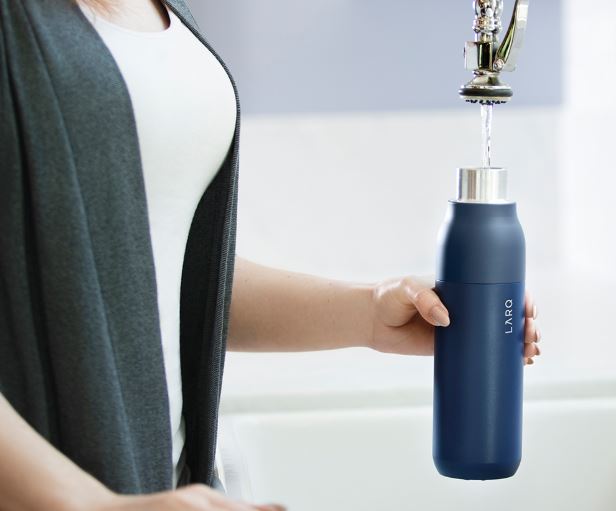 While some competitors use mercury-based lamps to generate UV-C light, LARQ uses a much safer LED source. Even if your source water seems relatively clean, it doesn’t take long for a few viruses or bacteria to multiply. In fact, this often creates the bad odors common with other bottles. LARQ activates on its own every 4 hours to ensure no unwanted contaminants multiply even if you aren’t available to press the button manually.

If you only use water in the LARQ, they claim it is 10,000 times more hygienic than a standard reusable bottle and thus doesn’t require cleaning. If you choose to use other substances besides water, you will need to clean more frequently to remove any residue. 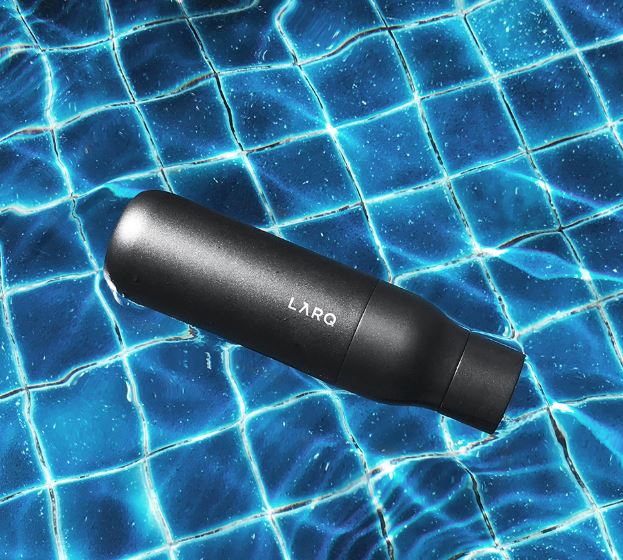 While the integrated UC-C light represents the most interesting feature, LARQ also uses double-insulated construction that maintains cold for 24 hours or hot for 12 hours.

We found the LARQ bottle exceptionally simple to use. Our only task was charging the rechargeable battery in the lid. LARQ estimates the battery will last up to 3 months during regular use in self-cleaning mode. This means that LARQ can provide reliable water purification even over longer travels without the hassle of worrying about charging the battery.

The “Adventure Mode” option gave us additional peace of mind. While the intermittent self-cleaning mode seems like enough to keep things clean over extended periods of time, if we’re backpacking and fill the LARQ from a stream, we want to blast that water with everything we have. We felt more confident about neutralizing the unknown pathogens with the higher powered choice.

Evaluating the LARQ claims of virus, bacteria, and bio-contaminant neutralization would prove impossible on our own. Seeing as we don’t have a laboratory testing facility, we have to rely on the testimony of others. 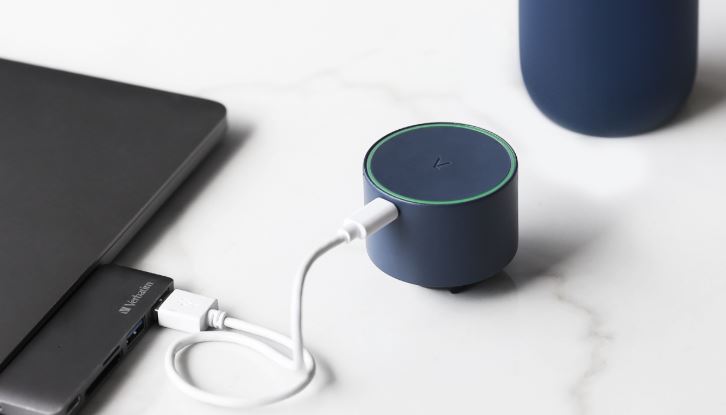 First, LARQ makes the point that UV-C light is already widely used today in hospitals to sterilize the surfaces of patient rooms. This lets you know the technology has solid footing.
LARQ claims to be the first company to use UV-C LED microchips that avoid the larger, toxic, traditional Mercury glass tubes. Fortunately, they cite testing by independent 3rd-party labs that verify UV-C LED as an effective solution to combat E.coli, Salmonella, staph, and MRSA pathogens.

During regular use, we greatly appreciated that the LARQ performs smart self-cleaning. Though we remembered to press the activation button most of the time, there were times that we forgot and fell back into the routine of simply filling and drinking. Even when we forgot to sanitize, at least we know the bottle will get cleaned every few hours. Over the course of our time testing the LARQ, we experienced no unpleasant odors or the slimy film sometimes present in other bottles after a few days.

The LARQ does an excellent job at what it claims to do, but it may be important to point out what it doesn’t do as well.

While the UV-C light can kill viruses, bacteria, and other “bugs,” the LARQ does not actually contain any filters. As such, nothing present in the water gets removed from the water. In the case of viruses and bacteria, this isn’t a concern. Once the dangerous or smelly contaminants get neutralized from the UV light, you can drink the water and they pass harmlessly through your body.

If you have concerns about other potential contaminants like metals or chemicals, the LARQ has no mechanisms in place to remove these impurities. The LARQ marketing does clearly state that it only eliminates “bio-contaminants,” but some potential customers could misunderstand that to mean total purification. Do not drink any water that you fear may have dangerous, non-biological contaminants. 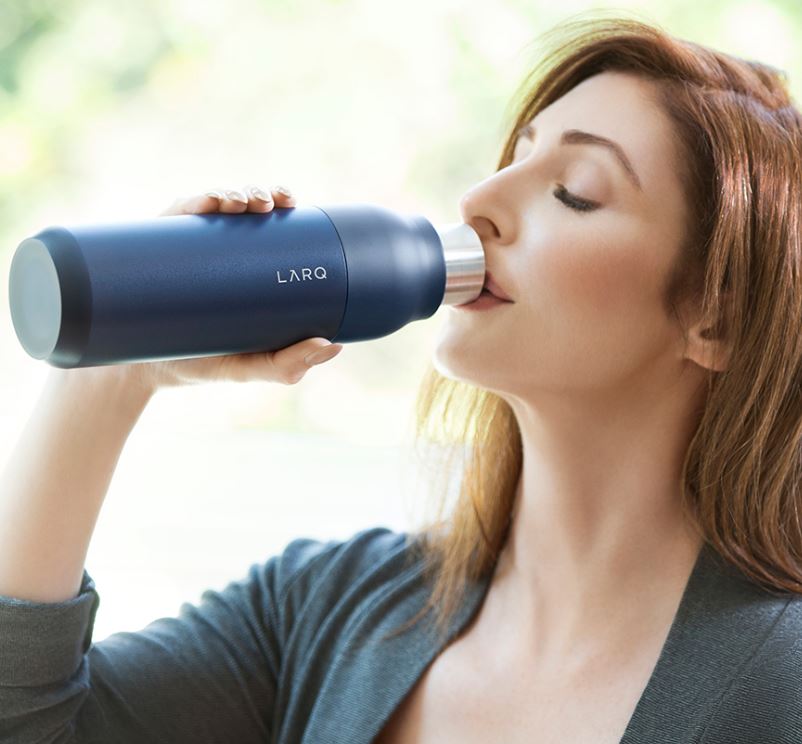 Additionally, in the FAQ section, LARQ specifies that water must at least appear visually clear for the cleaning to be effective. Even slightly murky water contains large particles of dirt or other impurities. Though the individual particles may not seem visible to your eyes, compared to an individual bacteria or virus, they’re enormous. These impurities block the UV light just like a beach umbrella, and any microbes hiding in the shadows will escape their certain death. We can’t imagine wanting to drink muddy or murky water anyway, but it’s an important note to make.

These limitations don’t mean the LARQ is ineffective, just that it has a specific purpose which must match your needs. If you’re travelling to another country with questionable tap water, the LARQ can give you confidence you won’t ingest any dangerous infectious agents. However, if you’re planning to take an extreme backpacking trip that will require you to drink out of unknown, potentially murky water sources, you’ll need a true filter to remove the dirt and grime.

The LARQ Self-Cleaning water bottle represents an important evolution of older technology to create a modern solution. There’s little dispute that the billions of plastic water bottles crammed in our landfills have a negative impact on the world we’re leaving for future generations. That said, it can prove challenging to sacrifice conveniences today for benefits that won’t be fully realized for hundreds of years. 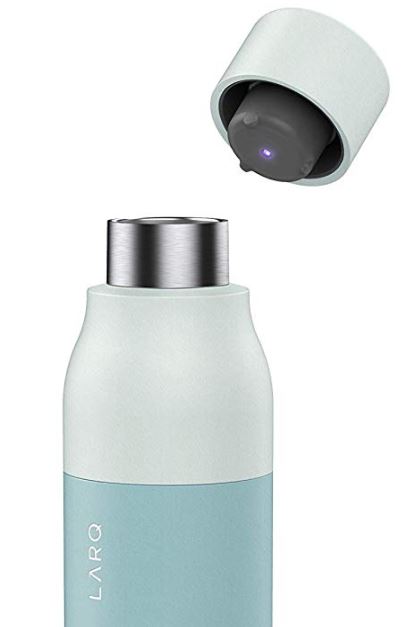 For any eco-conscious innovator, the “sweet spot” occurs when you create a product that betters the environment while also providing convenience and benefit for users in the short term. Then, there’s very little reason for people not to adopt your product.

With water bottles, single-use, disposable products don’t just harm the environment, they’re also significantly more expensive than tap water. People who want to avoid them for any reason are forced to use disposable bottles that can harbor dangerous and bad-smelling bacteria and viruses.

LARQ represents a solution that satisfies everyone. Environmentalists love anything reusable, frugal people will find LARQ pays for itself quickly when you can stop buying bottles, and the health and safety conscious among us have to love the sanitation options.

While the battery must be charged, it isn’t a big task to plug in once every few months. We do wish the bottle held slightly more liquid, but it isn’t terribly small.

Overall, we’re very pleased to find that LARQ can solve so many problems, both personal and environmental, in such a simple, convenient way. Who would have thought one little bottle could do so much good?