Clean air and good health go hand-in-hand. But for a lot of people, access to clean air isn’t something that can be taken for granted. That may especially be true for people who live in urban environments, but is also true for people who have allergy issues, and people who work in environments around pollutants. For those people, an air purifier can either a smart investment in their health, or an absolute essential part of life, but picking one can be tricky.

Like many devices, air purifiers come in a variety of shapes, sizes, and even levels of quality. You can find entry-level air purifiers, and you can find top-shelf air purifiers. And if you’re looking to get the most value for your dollar, you typically don’t want to be on either end of those two extremes.

Air purifiers are made by about a thousand different brands, but Levoit is actually one of the better known and better trusted brands in this particularly niche. In this case, you’ll find the Levoit LV-H133 is pretty close to the middle of the road. It’s not the flagship model, sure. But it is packing no shortage of real power and filtering abilities. 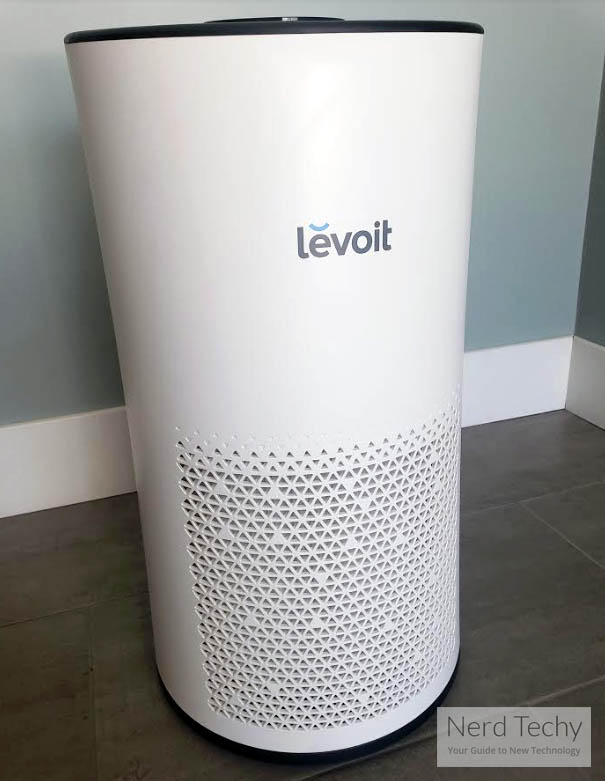 No matter why you’re picking an air purifier, one of the most important selection criteria you have to consider is the size of the room you want to keep clean. Bigger rooms require an air purifier than can handle larger volumes of air. More floor space is harder to filter, and typically can’t be effectively filtered by a smaller unit.

Conversely, larger units tend to have their own problems. Fans can become increasingly noisy. And pollutants may accumulate more rapidly in a smaller room, which makes it necessary to circulate them out of the air faster than when you’re dealing with a larger room. Here you’ll find the LV-H133 is supposed to be able to accommodate about 550 square feet of space.

That means it’s good for a smaller apartment of an office space, but not necessarily the right choice to single-handedly clean out a larger home. But how does it perform in its day-to-day capacities? 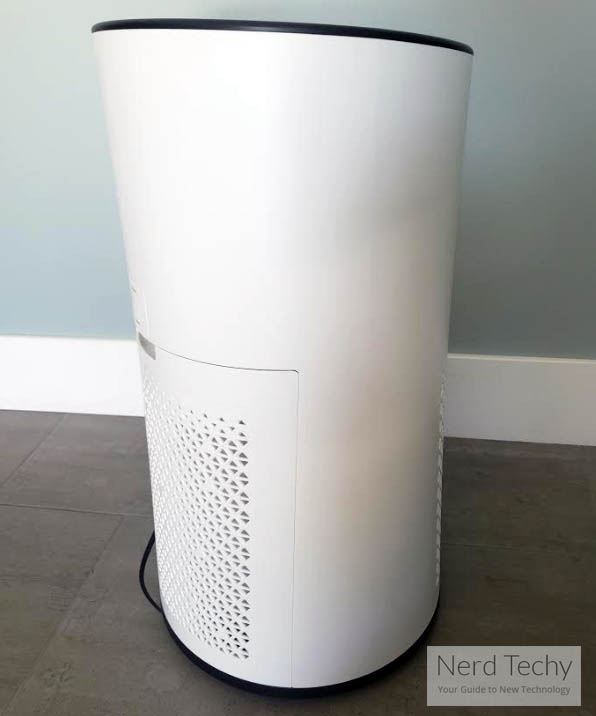 Physically speaking, the LV-H133 is pretty standard in both size and appearance. It uses a cylindrical build that measures around 26.1 x 16 x 15.5, and it basically looks like a skinny trashcan with a fancy light on top. That light is a LED display that functions as a full touchscreen. So from the display, it’s possible to review the quality of the air in the room, or to make changes to how you want the LV-H133 to operate. We’ll look more closely at the various modes of operation a little bit later, but this is essentially where you’ll set or alter your operation timers. 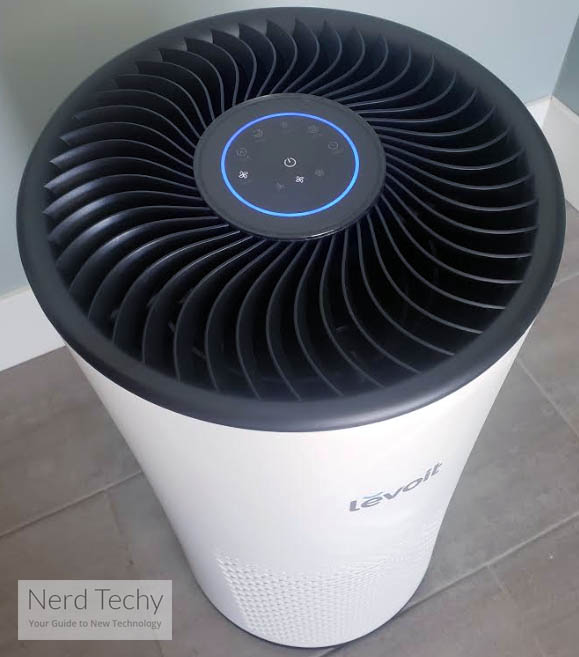 It’s also where you’ll find the filter change indicator. Different manufacturers have different guidelines when it comes to how often you should be replacing your filters. The LV-H133 and its filter is expected to last for around 6-8 months, partially depending on how much air you’re pushing through it. Since this is such a long time, it’s unfortunately quite easy to forget that you’re supposed to change the filter. That’s where the indicator light comes into play – helping to let you know the time has come. In that regard, it’s similar to the engine light in a vehicle. 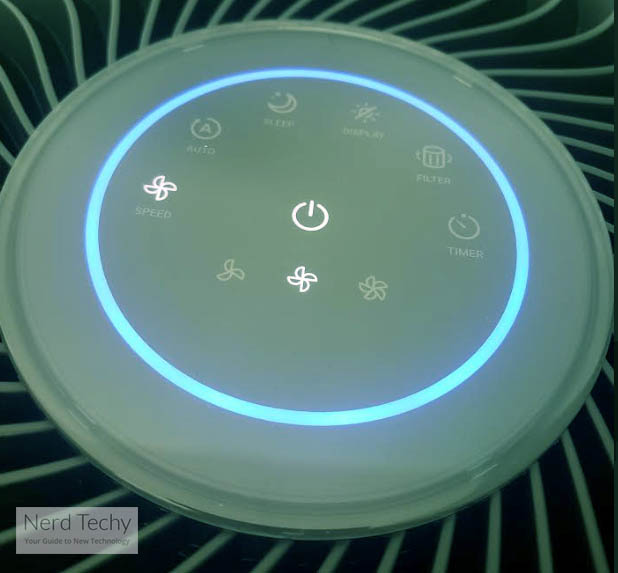 That sounds like it might be a good thing, but ozone isn’t something you want to breathe in. With those air purifiers, you end up eliminating one health threat only to create another. But thankfully, the LV-H133 doesn’t fall into that trap, running a UV-free design that doesn’t involve the creation of ozone in your home.

So how well does it filter without UV? Well, the LV-H133 is designed with a fairly unique three-in-one style filter. Across the three filters, you’re supposed to be able to help target a variety of different types of air impurities. The first filter that air passes through is a basic pre-filter. This filter is intended to capture big chunks of particles that are trapped in the air. In other words, it’s good for capturing mold spores, bits of pollen, and dust. 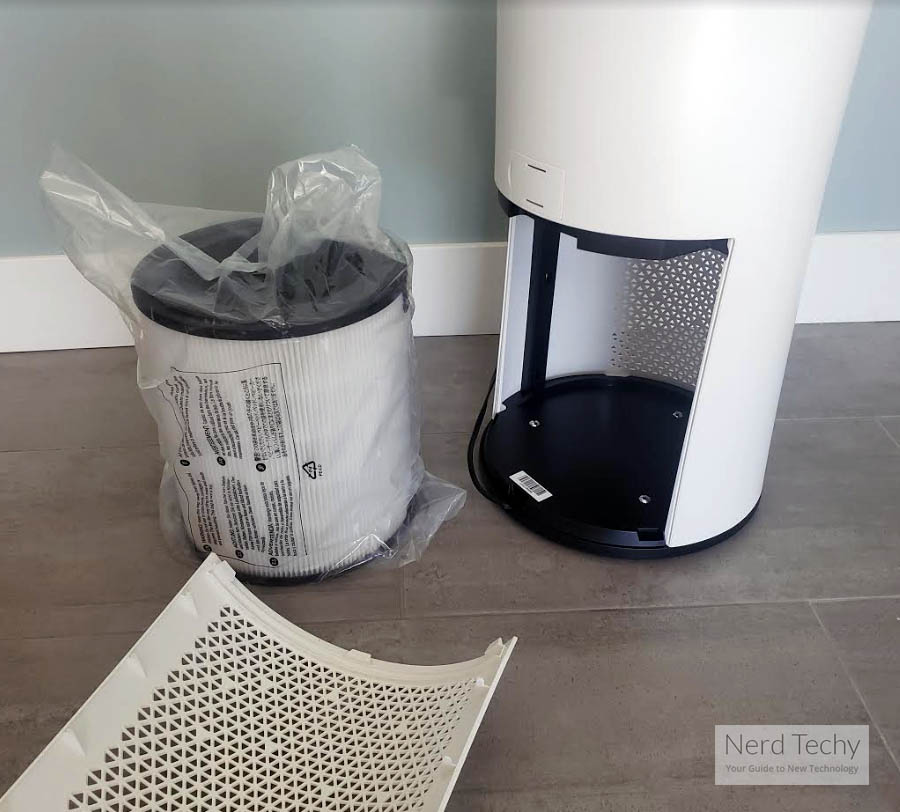 After passing through the pre-filter, air moves on to the second filter, which is an activated carbon filter. This is necessary for removing odor from the air. So if you’re concerned about the smell of cigarette smoke, or the smell of burned toast, the carbon filter is there to help you out.

Finally, air moves through to a HEPA filter. That filter is intended to target the smaller particles, which were unable to be captured by the first two layers of filtering. In this case, you’ll find the LV-H133 makes use of a filter capable of nabbing particles that are 0.3 microns large or larger. In most circumstances, the HEPA filter is supposed to be able to remove about 99.97% of the junk that passes through it.

If you’re interested in protecting yourself from air pollution, then it’s worth noting the most dangerous particles are the smallest particles. That’s because if teeny tiny particles enter into your body, then your body typically has no way of getting them out. That’s what makes substances like asbestos dangerous – they get lodged inside you and never leave.

But removing particles that are smaller than 0.3 microns tends to be extremely expensive. So unless you have a specific reason to be worried about a specific type of pollutant, you need not worry about moving beyond the capabilities of these filters. 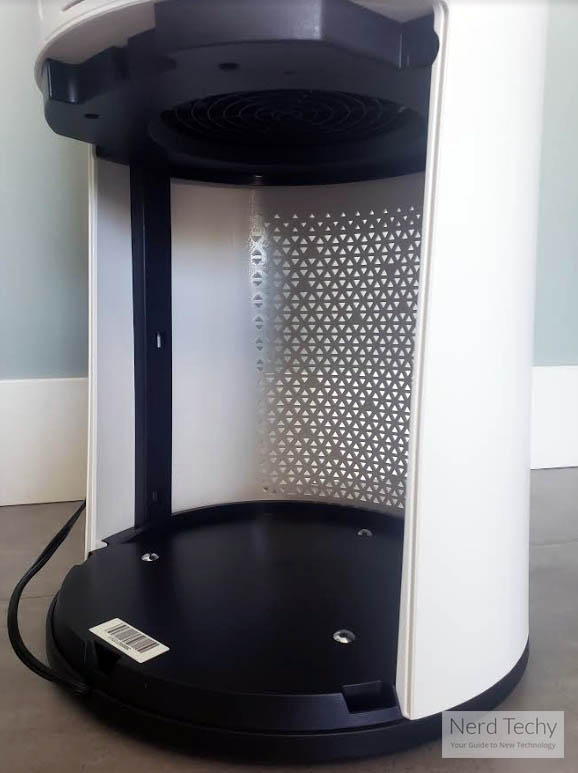 The LV-H133 is also constructed in a cylindrical shape for a very particular reason – it allows for the unit to operate a higher efficiency in filtration, and in redistributing the clean air back into your environment. That efficiency is made even better with the kind of customization you can access from the display.

For instance, at different times of day, you might have different levels of impurities within your home. When you finish vacuuming, the vacuum machine has probably kicked up a bunch of debris into the air. And that’s when you might want to run your air purifier on a higher setting. When you run on a higher setting, that basically just means you’re spinning the fan faster, which can lead to noise. 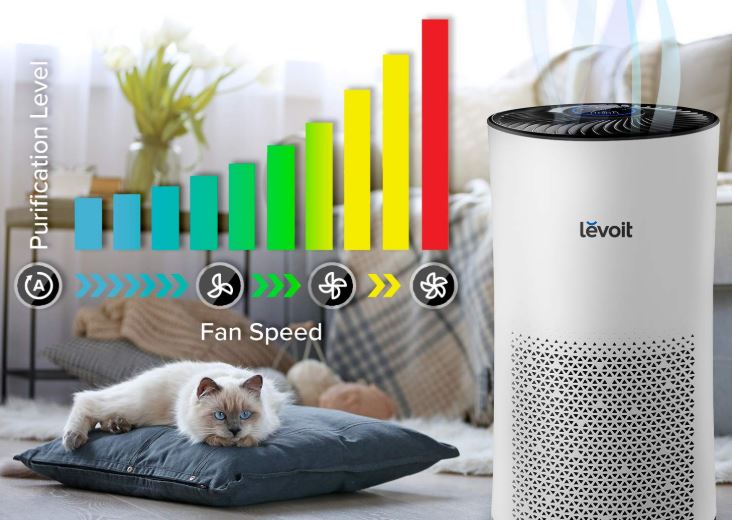 At the highest setting, you can expect the noise level to reach around 54dB, which is a humming sound that is low, but may be heard from across the room if the room happens to be quiet. These higher speeds also mean you’re burning through just a little bit more electricity, but it’s really the noise that tends to prevent people from simply running their filter on the maximum setting at all times. Speaking of electricity, this filter has a peak power rating of 33W, making it similar to a lightbulb in terms of its power draw. Pretty low!

There are actually a couple of different speed defaults. The first speed is basically a manual mode. You’re able to adjust the speed manually, as you see fit. You can even set it alongside a timer, similar to a microwave. For instance, if you’ve just finished vacuuming, you might set your air filter to run at 100% speed for an hour, and then turn back to a normal pace. Running at its maximum speed, this air purifier is able to produce 235CFM of airflow – which is what makes it suitable for around 550 square feet of space.

The second mode is called sleep mode. It’s basically there to make sure that the air filter can still operate while never disturbing you. That’s clearly ideal for people who are running the machine in their bedroom at night, and who don’t want to be disturbed by the humming noise of a fan. During sleep mode, you can expect the noise to be around 25dB. That basically means most people will strain to hear it, even if they’re sitting a couple of inches away from the device.

Last but certainly not least, there’s an auto mode. It makes use of an air quality monitor that’s been built-in to the LV-H133, allowing it to turn up or down speeds as it deems necessary. For people who are looking to remain hands-off with their filtering, and who don’t imagine themselves likely to be bothered by the humming noise of the fan, this mode is a great way to set-and-forget.

Though this kit doesn’t come with a bunch of extras, it does include everything you need to get started using the air filter. That includes a set of filters, and a two-year warranty. Luckily, you don’t need to over-think the warranty because the probability of an air purifier with this type of design encountering an issue is pretty low. 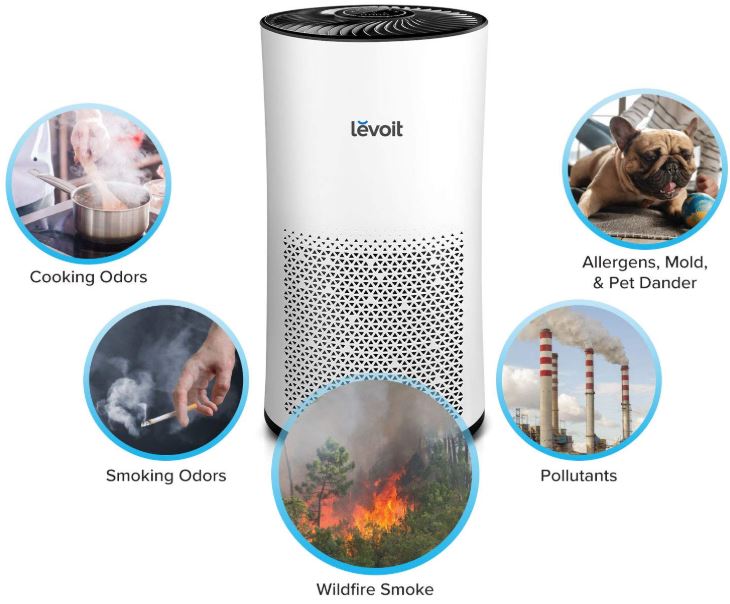 Who Should Pick the LEVOIT LV-H133 Air Purifier?

There are some things the LV-H133 cannot do. But most of those things are features you’ll only find on extremely high-end air purifiers. For instance, a top-shelf purifier may allow you to customize when you want the purifier to run in far greater detail, from minute to minute, like another air purifier we reviewed recently, the Wynd Halo. But that’s not something the average user will really need.

Extremely high end filters occasionally make use of technologies apart from regular HEPA filters. For most people in most circumstances, HEPA filters will be more than enough for effective filtering of the air. But if you’re concerned about more than dust and pollen, and you’re willing to spend hugely on your purifier, then it is possible to find filters that are even more effective than HEPA.

But for the average person, the LV-H133 Air Purifier ought to be a great middle point between two extremes. It’s not a basic purifier that totally lacks customization potential, and it’s not really providing you with far more than the average person needs. So assuming you’re trying to clean up around 500 square feet worth of space, the LV-H133 Air Purifier is likely a smart choice.