When it comes to monitors and TV screens, we clearly have an obsession with size. The days of squinting at a small 19-inch CRT television have long passed, and 40-inch or larger flat screen Full High Definition screens have now been relegated to the “Budget” category. Screens at sizes that once cost as much as a small car now likely cost less than the smartphone in your pocket.

While the technology is essentially the same, your needs for a PC monitor tend to be different than the needs of a TV screen. It does depend greatly on the user, but for many people a PC monitor setup has more to do with productivity than entertainment. Gamers may want an ultra-fast monitor or multi-monitor setup with extremely high refresh rates to handle fast action in games, but they may care much less about things like color accuracy.

Other users, particularly those in photography, videography, or graphic design, aren’t particularly concerned with the refresh speed of the monitor since they work with primarily static or slow-moving images. To those users, color accuracy takes on a huge priority as they need to ensure the video or images they’re working on will look the same once printed or viewed on other screens.

Most users don’t think twice about their monitor technology, but industry professionals know that an IPS monitor is a must-have for color accuracy. The LG 32MA70HY-P 32-inch Full HD IPS LED Monitor is a large productivity focused IPS monitor designed to maximize what you can do with a single monitor. Let’s take a look and see if this big screen will get to work for you. 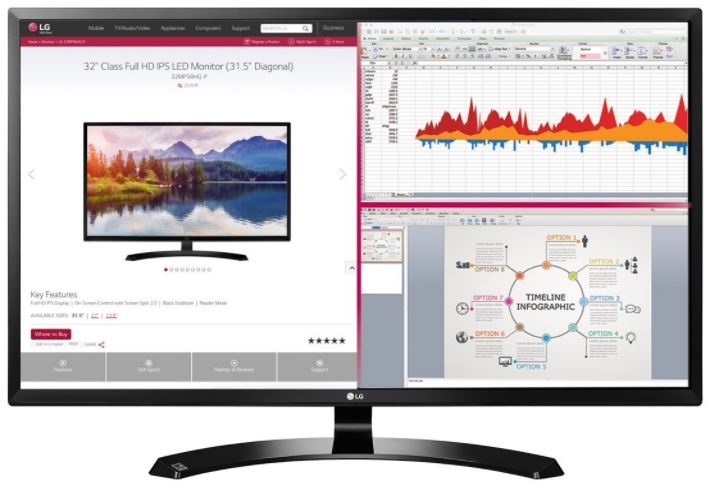 It may not sound like the most exciting topic, but bear with us for a bit while we discuss monitor technology.

When shopping for a monitor, most users will simply look for the largest monitor they can get for their budget. Others who may value quality might check online reviews, basic specifications, or even try to look at some screens in action in a physical store. Very few people think about the technology driving the screen they’re looking at.

The majority of consumer monitors use a technology called Twisted Nematic, or TN. Researched and developed primarily in the 1960s, this technology uses electrical current to twist the alignment of liquid crystals which either allows light to pass through or scatter and appear dark.

TN technology has some distinct advantages. Panels are relatively inexpensive to produce, require less power to operate, and have very fast response time compared to other technologies. Unfortunately, the main drawback comes from inaccurate color reproduction. This becomes most evident when viewing the screen at an angle where perceived colors can often change or even invert completely.

IPS technology was developed in the 1990s as an alternative to the weaknesses of TN LCDs. While the technical differences are far too complex to detail here, it’s important to note that while IPS still uses liquid crystals, it does use different technology to gain certain advantages. Primarily, IPS monitors have more accurate color reproduction from a wide range of viewing angles. Additionally, there are no effects from touching the screen which is important for modern touchscreen devices.

The biggest drawbacks of IPS monitors are increased cost and slower response time, but any graphic professional would gladly make the tradeoff for the improved color accuracy.

The first thing you’ll notice about the LG 32MA70HY-P is the massive size. While 32 inches, technically 31.5, may not seem large for the TV screen across your living room, it’s absolutely enormous if it’s sitting less than three feet from your face on top of your desk. Over the years as prices have fallen, the “standard” size monitor has grown from 17 inches up to around 22 to 24 inches today. A 27-inch monitor is still seen as large, so a 32-inch model is just plain big. While screen size measures the diagonal, the total monitor dimensions with the stand are 28.6 x 19.4 x 8.1 inches with a weight of 14.3 pounds. 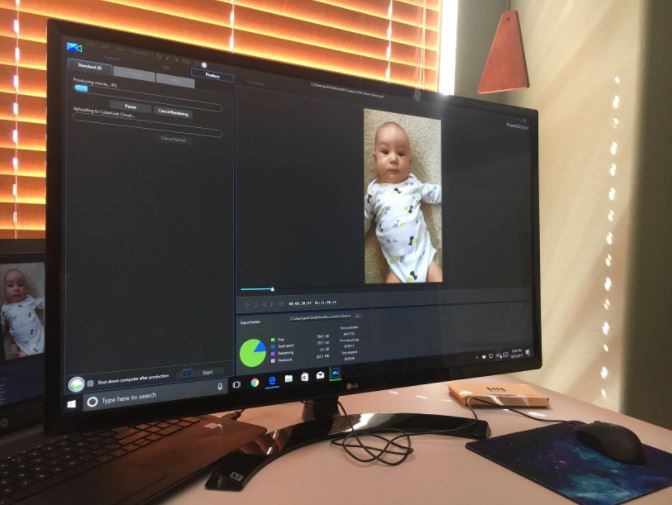 Aesthetically, there isn’t much noteworthy about most monitors. LG uses a thin, black rectangular bezel and a curved black base. The minimalistic design looks professional and inoffensive and will blend in to the background of any environment in which you place it.

The 32MA70HY-P, while 31.5 inches diagonally only has a Full HD, 1920 x 1080 resolution. We’ll address this more thoroughly later, but this is clearly the screens largest weakness. It features a 5ms GTG response time, 250 nits of brightness, and a large 178 / 178 degree viewing angle. Curiously, instead of specifying a Contrast Ratio, LG only lists “Mega.” The power draw will keep your electric bill and the environment happy with a fairly insignificant 33 watts under normal use.

LG chose to include very few ports. With one each of HDMI, Displayport and D-SUB connectors, you’ll have what you need but not much more. No USB ports make an appearance, although a headphone jack is inconveniently placed on the back side.

Aside from the large size, the LG 32MA70HY-P comes across as a fairly “no frills” monitor. LG does look to take advantage of the large screen size and add some additional features to improve your user experience. 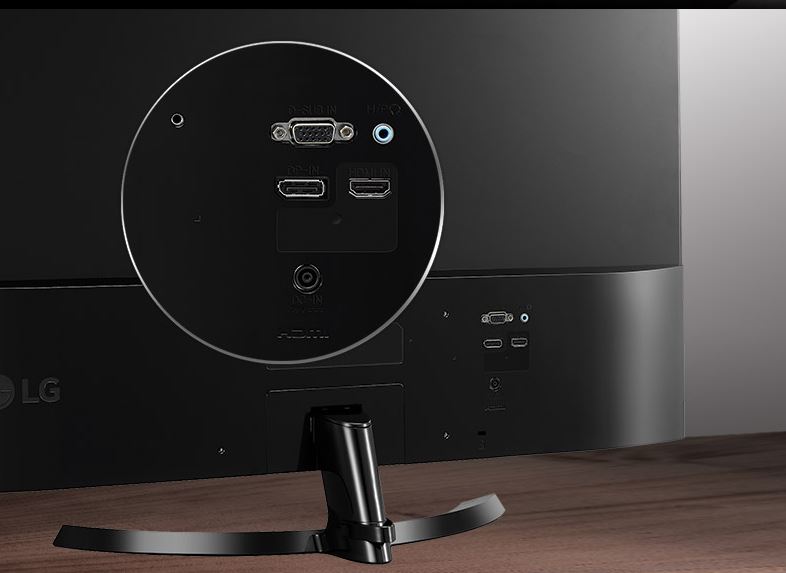 First, Reader Mode, leverages what we’ve learned about light and eye strain. Science tells us that the blue portion of light contributes most to eye fatigue while also preventing our bodies from preparing for sleep. This bad combination can lead to sleepless nights and tired eyes. Reader Mode lowers brightness and reduces the blue portion of the light emitted by the monitor. This results in a bit of a dingy, yellowed look to your screen. Obviously, this wouldn’t be the right choice for an impressive picture or graphic work, but if you have a lot of reading to do you’ll soon adjust to the altered colors. You won’t notice it after long but your eyes will definitely thank you.

The biggest productivity feature comes from the highly configurable screen options. LG calls this Screen Split 2.0. While many power users elect to have two, three, or more monitors for maximum productivity, LG leverages the large screen to create a multi-monitor experience on one panel.

Through the convenient software-based control panel, you can configure up to four split screens in a variety of horizontal, vertical, or picture-in-picture options for a total of 14 possible configurations. This means you can research and type without flipping windows, monitor multiple stock charts simultaneously, have multiple design tools open, or any other configuration you can imagine. 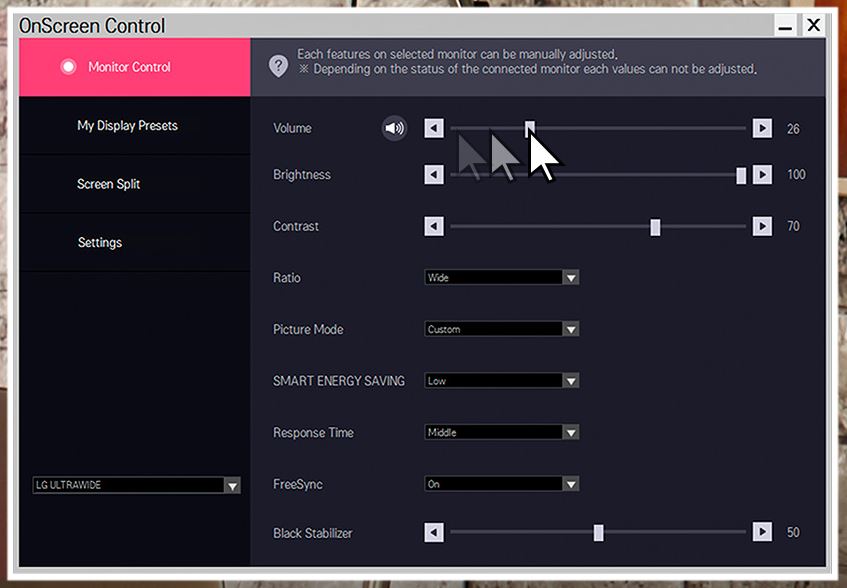 Here’s where we have very some very mixed feelings about the LG 32MA70HY-P. First, it’s priced extremely well for a very large IPS monitor. We felt color reproduction was very accurate from a very wide angle. While a 5ms gray to gray refresh isn’t spectacular, it works perfectly fine in all but extremely fast motion games. Essentially, it performs as we would expect an IPS panel to perform.

Our biggest complaint is the resolution. Obviously, switching to 4K resolution would likely increase the price significantly, so it doesn’t feel completely fair to complain. However, with LG’s obvious emphasis on productivity, you have to consider the resolution carefully.

1920 x 1080 looks fine on a standard sized monitor, but as you stretch it to fit a large screen, the clarity worsens as the size of the pixels increases. If you plan to wall mount the monitor and sit farther away, it’s reasonable to trade size for clarity as you won’t notice it. If you will be sitting close, it definitely has an impact.

Resolution counts the number of pixels on a given screen while pixel pitch measures their actual size. A 32” monitor at 4K resolution has a pixel pitch of 0.1845mm, whereas the 32MA70HY-P pixels measure 0.3637mm square. With nearly twice the length and width, that means the pixels take up 4 times the space on the 32MA70HY-P. Unless you have particularly bad eyes or plan to sit farther away, it is noticeable. 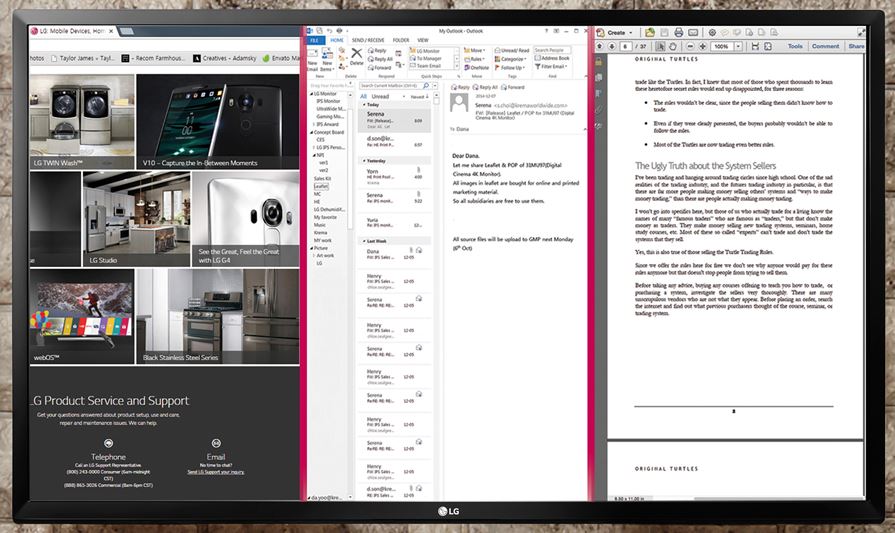 While having advanced split screen capabilities sounds great, if you actually use the 4-way split your end result will be 4 screens measuring 16 inches with only 960 x 540 resolution each. Though this is the worst-case scenario, anything more than the dual split did seem to challenge readability and clarity.

If you’re positioning a product toward professional users more likely to appreciate the advantages of IPS technology, what are the odds that these users will be willing to accept such low screen resolutions? While the multiple split options do enhance productivity without requiring the additional desk real estate of a multi-monitor setup, we’d prefer having more than one monitor even if smaller.

It’s always challenging to evaluate electronics at different price points. While more budget-friendly options lack the features of top of the line parts, most buyers just simply can’t or won’t pay for premium gear all the time. That said, we do always have to consider whether a product achieves its primary objectives. 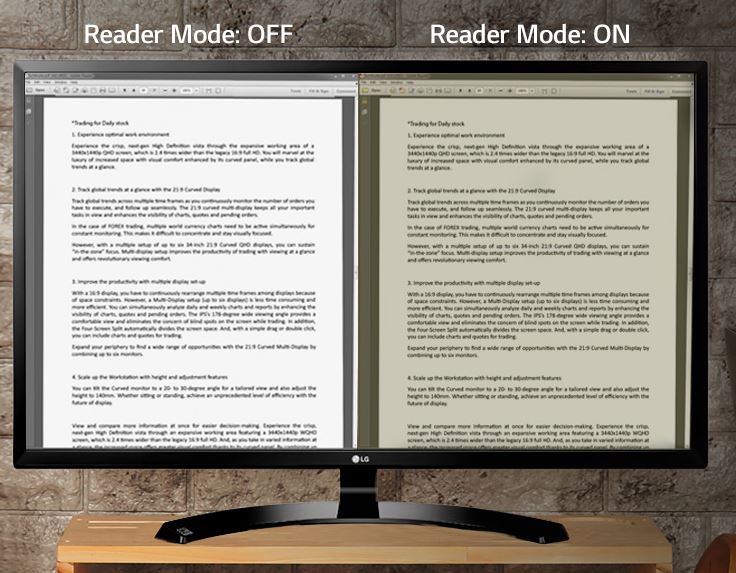 In the case of the LG 32MA70HY-P, it’s a bit difficult to say. First, this monitor was never intended to be a flagship product. Releasing a 1920 x 1080 monitor into a 4K world makes it a clear value proposition. On one hand, getting a massive 32-inch monitor for a fantastic price might be a great option for you in a few circumstances. Perhaps your work depends more on color accuracy than fine detail and precision. You may appreciate the clean aesthetic of a wall-mounted monitor and want the biggest screen you can get since your eyes will be farther away. Alternatively, you may want the productivity or multi-monitors but just don’t have the desk space. These scenarios could happen.

Unfortunately, hesitate a bit at LG’s suggestion of in-monitor split screen as an enhanced productivity measure. Though the screen has the size, by the time you fraction it off you’re left with a number of small, low resolution screens. Again, this might not bother you depending on the work you need to perform or the windows you need to monitor, but it seems like a curious choice as most pros would need more than the few pixels left over.

The LG 32MA70HY-P is a good IPS monitor at a great price, but not much impresses aside from its massive screen.