Many of the features that make cameras effective are not hardware features. Instead, they’re software features. Things like the ability to set motion zones, or like the ability to identify faces? Those are all things which happen on the software end. Motion alerts? More software. And due to the nature of software, it’s always just a matter of time until those kind of features trickle their way down to entry-level equipment.

Which is where the Litmor Battery Cam comes into play. The whole idea behind this camera is to make things economical. It’s supposed to be cheap as cheap gets. But even though it’s aiming for an economical design, it doesn’t want to require that you give up on certain features that matter to you. Because they also provide some options for expansion. For example, Litmor’s AI can also recognize animals, cars, and people. Though those services are paid, so you do need to expand your kit a bit for that. 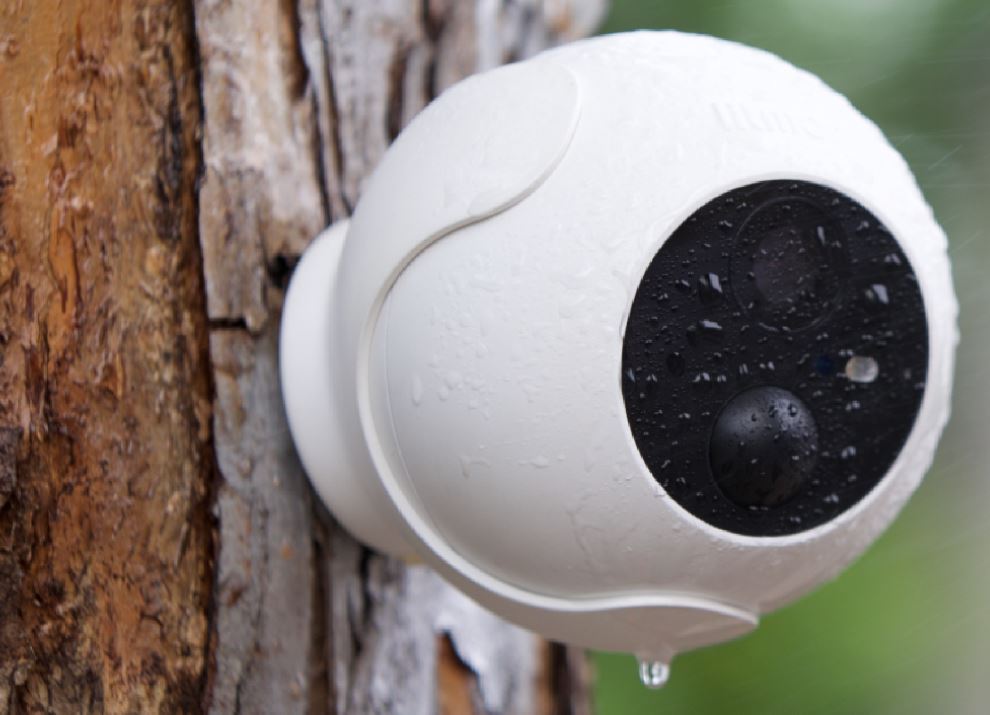 Apart from the expandability, this kit is packed with the essential kind of features that people need from their security cameras. So even people who don’t end up taking advantage of the optional expansion opportunities can still get the kind of features they need from a standard security cam. That includes the ability to listen, watch, and interact with people through the camera. The camera can even make use of its own smart algorithm to check for cars, animals, strangers, and to differentiate between them.

When it comes to recording in the dark, Litmor’s cam its own bright LED lighting so you’re able to view in color, even when it’s dark outside. As you capture footage, everything gets recorded onto a micro SD card, which helps you avoid the kind of monthly fees associated with cloud storage services. And it makes getting your hands on the video pretty simple. But how well does the Litmor Cam work in daily application?

Notably, the camera is a small sphere, measuring about 3” x 3.4”. The mounting base is shaped in order to crater the Litmor Battery Cam, so it measures 3.4” x 1.9”, making it just a tad smaller than the camera itself. Both use a white chassis that is given a home-friendly design, so you could use the unit indoors or outdoors.

If you decide to go outdoors, you’ll be pleased to find a IP66 waterproof certification, which means this camera is protected from heavy rain. So you don’t have to worry about outdoor installations. But you do want to avoid any situations where the camera might be submerged in water, especially for a prolonged period of time. Because water resistant isn’t quite the same as water-tight. 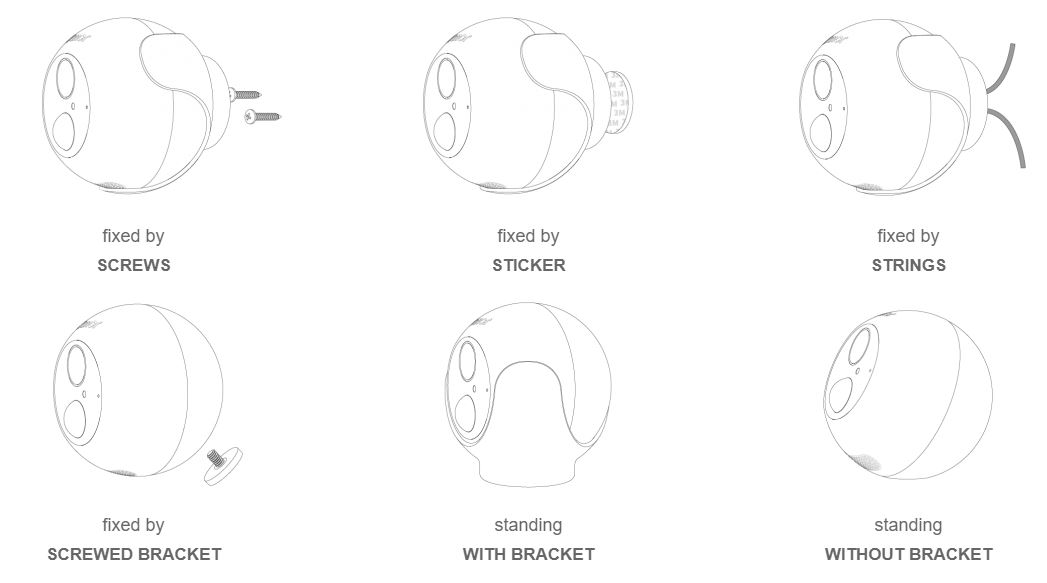 The field of view is about 10-dgrees horizontally, and 125-degrees diagonally. That’s a tad narrow for a security camera, which can usually be found shooting out towards a 160-degree viewing angle. But this is a wide compromise compare to the narrow 80-degree viewing angle provided by some kinds of similar cameras.

The video gets recorded in 1080p. Now when it comes to surveillance, there are actually a couple of circumstances where it’s possible for 720p to be perfectly good enough. But when you make the leap to 1080p, you’re covered in essentially all circumstances. Because you simply won’t need to get the higher definition of a 1440p shot, and you’re going to be better suited with the kind of battery performance and recording capacity of a 1080p design as well. Let alone looking into the cost of jumping to higher resolutions for effectively no reward.

Because everything is shot in 1080p, they had to compromise somewhere to help keep data storage and costs down. In this instance, they’ve decided to compromise by keeping the frames per second at 15. That’s not quite as smooth as TV, it’s much more like a slightly lag-ridden webcam than anything else.

The 100% wireless design comes with an ultra-long battery lifespan, intended to last up to an entire year. The internal batteries are 5200mAh, able to with stand quite a bit of powering up and down before they need to be replaced. Though that does depend on certain things. If you’re running the eco mode and are only having the camera detect motion about a dozen times a day, then you’ll make it to a year.

If you’re not running the eco mode, then you can expect to get closer to 4 months of lifespan between charges. That’s still pretty good, it means you’ll only need to need up recharging the battery about three times a year. Even someone who was making frantic use of the unit would only need to recharge perhaps five or six times per year.

The Litmor app allows you to access the camera, check out the live feed, view recordings on the device, and talk to visitors. It’s pretty approachable and easy to use, though it’s also somewhat clear that this app was designed on the cheap. 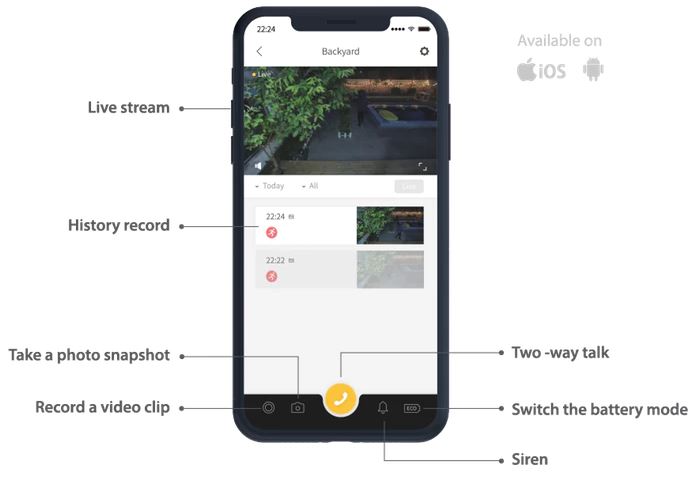 The configurable monitoring settings allow you to create unique monitoring schedules for each day of the week. You’re also able to configure different motion zones and treat them differently for your motion detection settings. Don’t care if someone’s in your yard, but do care if something steps into your garden? The camera can distinguish between the two and let you know what’s up. It can even distinguish between people and animals, so you’ll know whether the thing in your garden is a child or a deer.

The day brief portion of the app allows you to see how many times the camera was triggered, and when. It charts everything out for you, from the number of times you viewed the live feed to how often the siren was triggered. It’s actually not full of that much useful information, but it’s nice they’ve put it all together in a graphical format for people who are interested in the data.

The app is also where you can customize those motion zones, allowing you to reduce the number of false alerts you’ll experience. And it’s where you can set your own monitoring schedule, so you can establish hours where you do not want to get any more alerts. 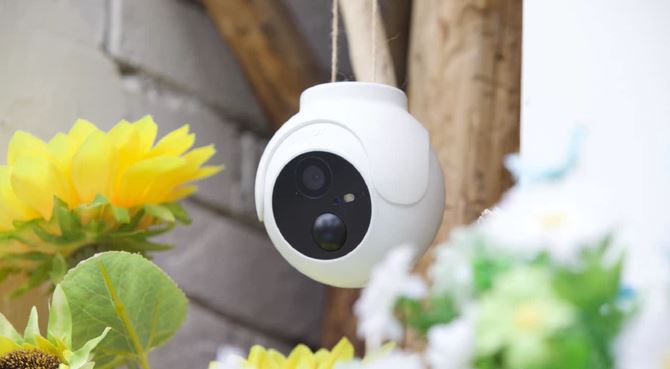 In order to install things, camera gives you three options, depending on the permanence you’d like. The string-method of installation does a pretty good job of holding the lightweight camera in position, but the screws-method really are the way to go for people who don’t want that camera to move. For people who are looking for something simple and easily removable, sticky pads work as well.

The mount is supposed to fit on any surface. You could stick it to a tree, a wall, or some shutters against the side of a house. The mount actually allows you to turn and adjust the camera as well. One problem is that the mount can only twist side to side, so it’s not totally articulating. You still have to put some thought into where you want to place it.

The problem with these types of cameras is rarely the upfront cost. Sure, the big brands will sell you their camera pretty cheap. Almost at cost! But there’s a reason why their device requires you to use their services. It’s because they’re making all their money on subscription costs. Once you need to connect with the cloud to upload your data, you’re suddenly going to find yourself spending a few bucks on a regular basis to keep that subscription rolling.

The Litmor Battery Cam does support cloud storage, but they don’t have a proprietary service that you’re required to use. The optional cloud storage costs about two bucks per month, per camera. The 128GB storage maximum for SD cards doesn’t really put a high ceiling on you, though. So unless you want continuous recording, you probably can live without the cloud connection. Still, the cloud can be cool for people who are interested in the security of having all their data tucked away online instead of being placed inside an SD card within the camera.

Theoretically, a 128GB SD card could run you around ten days of continuous footage in 1080p. In other words, around 240 hours of continuous playback. For a more common 64GB card, you can pretty much cut those expectations in half. But even five days of footage is probably more than enough. And naturally, there is a loop recording feature in play to help automatically record over the oldest files in memory when the SD card runs out of storage. 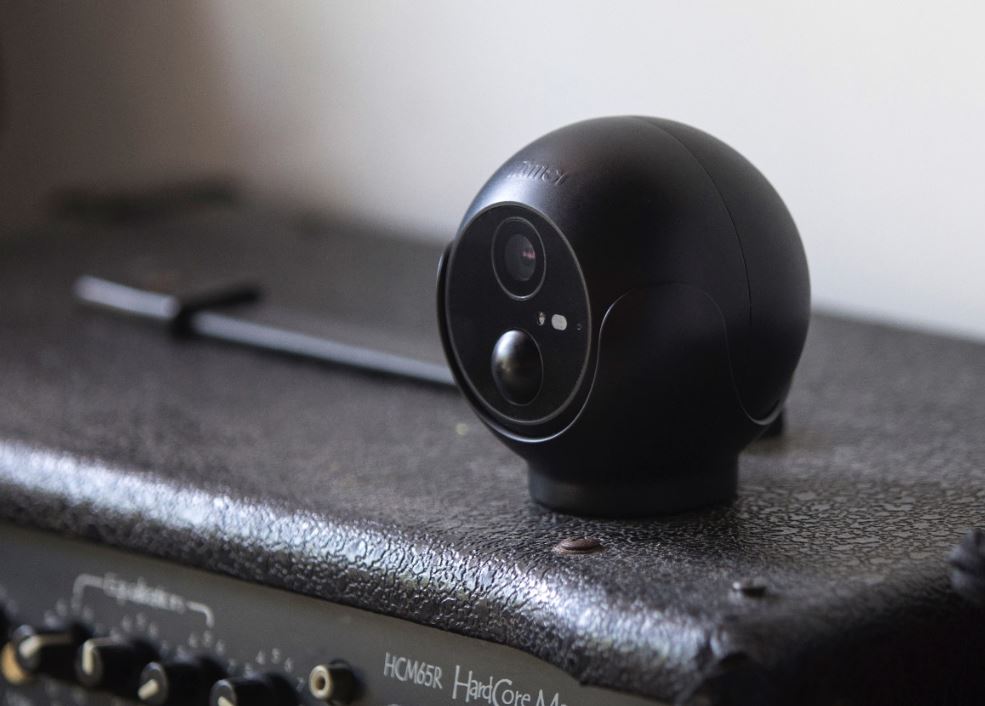 Another thing to keep in mind, there’s an anti-theft alarm, which triggers a 106dB siren that continues until the battery elapses. It’s not a perfect solution, but it’s much better than a camera that sits quietly while someone tampers with it.

Within the app, you can also trigger the siren. This is a bit strange, but it might do the trick of scaring away some animals that were trying to eat your garden. Or perhaps spook someone who was in a place where they shouldn’t be.

One final thing to note. The night vision can see about 15-feet into the darkness. That doesn’t seem like much because it’s an LED based night vision setup. But to its credit, it does give excellent vision for those 15-feet.

The Litmor Battery Cam is able to work with Google Assistant and Alexa, which makes for smooth smart-home integration. While there aren’t a ton of extras included with this kit, Litmor’s cam does include a one-year warranty.

Who Should Choose Litmor Battery Cam?

It’s not difficult to see the appeal here, or it shouldn’t be. Litmor’s Battery Cam lets you access a lot of features that are usually reserved for higher-end cameras. Those are mostly software features, like the ability to discriminate between pets and people when drawing alarms and sending notifications. And a couple of those features do require you to consider adding their subscription service.

However, given the adaptability and generally low cost behind this unit, that makes the Litmor Battery Cam a good choice almost anyone. It’s going to work well for someone who’s looking into setting up a camera in their living room, pet area, entrance, backyard, nursery, and so on.