Batteries can be decently expensive. Of course, it doesn’t feel that way when you’re throwing down a couple of bucks for a pair of AA’s. But when you need to get pack after pack, over time, it does add up. You might be someone who takes the time to responsibly recycle those batteries, or you might just throw them in the trash and try not to feel guilty about it. However, there are some simpler options out there, so that you don’t have to deal with those kinds of problems.

And even once you’d charged them up, their maximum lifespan never seemed very good. How many charge cycles could you expect? A few hundred at most. The technology just wasn’t there yet. But when mobile devices like smartphones became more essential, battery tech caught up pretty quickly. Which does make this a good time to revisit the idea of rechargeable smart batteries.

Pale Blue Lithium Smart Batteries are essentially an example of those modern technologies being applied to old ideas like rechargeable AAs. And that’s why Pale Blue are supposed to be among the best rechargeable lithium batteries you can get your hands on. Do they really do that much? Well, these batteries deliver in at least a couple of important ways.

For one thing, they’re are supposed to be able to put out higher levels of voltage stability, higher current output, and greater reliability than typical alkaline batteries. In almost every respect, they certainly outperform older NiMh rechargeable batteries. And as a result, the recharge time from Pale Blue is basically five times as fast as older batteries used to be. So it’s clear they’ve raised the bar, so to speak.

But of course, speed is just one element you might care about. How about the cost of replacements? How about the longevity of each cell? Do they hold their charge evenly over time? It can take a lot to make a good pair of smart batteries, so how do the Pale Blue hold up? 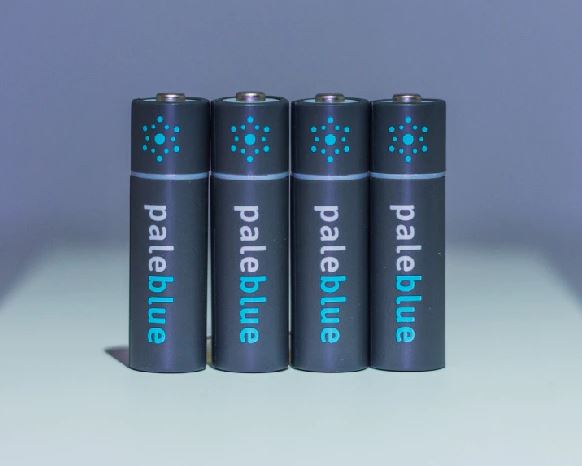 Another thing that helps to distinguish these headphones is their ability to put out an even charge. They maintain high discharge power throughout their lifespan. So if you’re using them in a device that’s chewing through the AA power quickly, like a bright flashlight, then you might expect 7 hours of total battery life. But the cool thing about the Pale Blue is that for all 7-hours, you’re going to continue to get roughly the same level of brightness from the bulb.

Because even as the battery approaches terminal quantities of power, it’s able to keep its discharge wattage up, unlike older NiMh batteries, and unlike alkaline batteries. With either of those, you’d start to see your bulb gradually get dimmer as the batteries ran their course. With the Pale Blue, you’ll only start to see dimming when the battery is truly on its last legs. 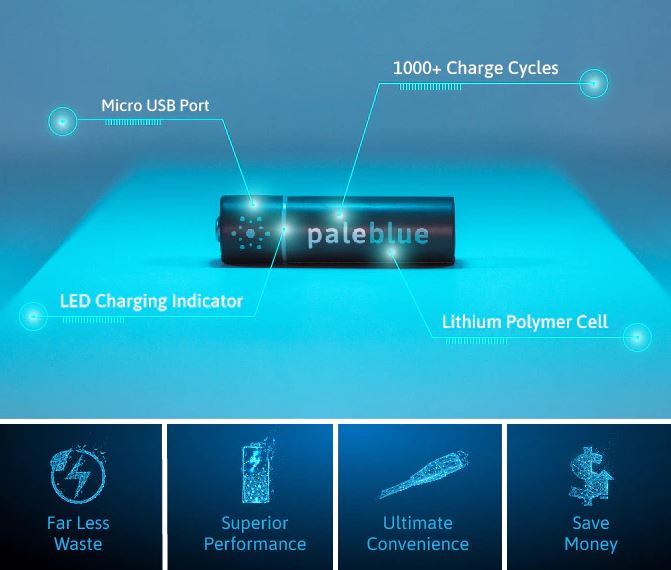 The included charging infrastructure is able to support a maximum of four batteries at one time. That’s actually pretty common, even older charging kits would usually let you power up four at a time. Another thing that you might want to keep in mind is that the USB connection is actually a Micro USB port, not a mini-USB port.

Another thing that’s different is that rechargeable batteries used to be pretty expensive. And justifiably so. They were still saving you a lot of money compared to using disposables. But in this case, the pricing has gotten even more competitive because batteries are cheaper to make than they used to be. So over the lifespan of one battery, you can end up saving 1,000 batteries, right? So if you get a four-kit, you’re saving 4,000 batteries, which is 1,000 four-packs of batteries. 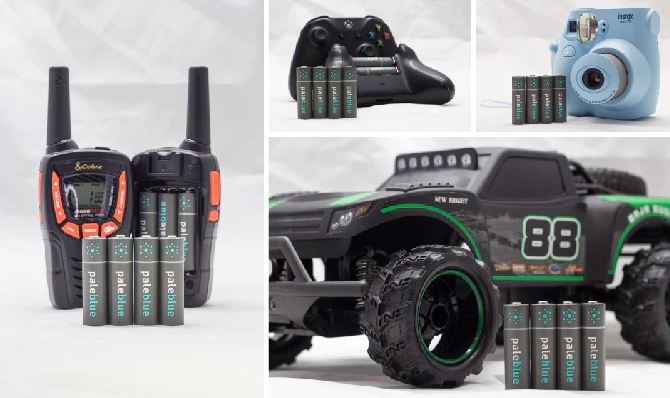 An inexpensive 4-pack of batteries might be around $3 or so, which means that four Pale Blue Lithium Polymer Batteries could effectively be worth thousands of dollars. Of course, it’s not that simple because people who are recharging batteries are paying for the electricity required to charge the batteries. And that makes the financial calculations a little less transparent. But still, over the long run, it’s pretty clear that you come out far ahead compared to disposables. And you start getting ahead pretty quickly.

Another problem with older batteries was that you had to recharge them with an AC wall plug. These days, it makes a lot more sense to use USB to charge things. So these batteries were designed without the use of a separate charger, instead using the USB format. That ensures both fast charging times and generally convenient charging.

For a compete charge, it takes just a little more than two hours. An older NiMh battery would run closer to 9 hours for a total charge. That’s because modern batteries can charge much, much quicker than older ones. Quick recharge times can be pretty convenient because the slower recharge times were definitely one of the worst aspects of using rechargeable batteries in the past. 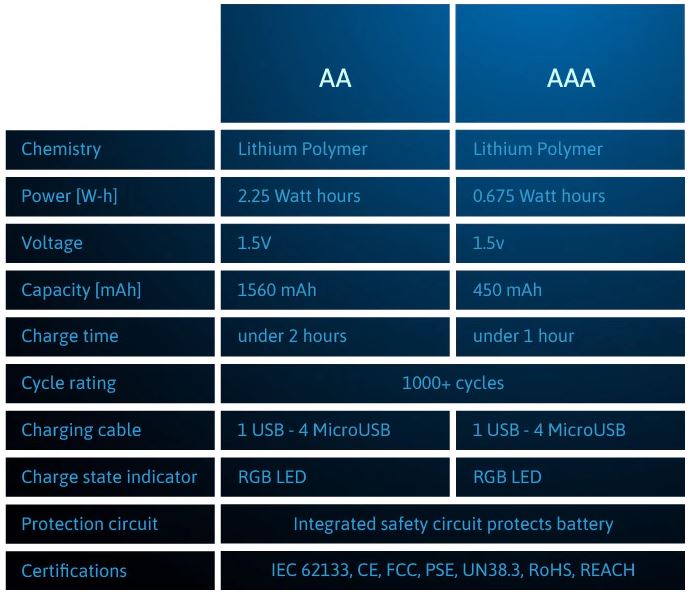 Technically speaking, these batteries do not make use of rapid recharge features. Those kind of features would be pretty cool to have because they would allow you to restore the batteries in a matter of minutes. But even the more standard recharge time inherent to these batteries is still fairly impressive, especially compared to the older style of rechargeable batteries.

Inside Pale Blue, you’ll find a design that’s expected to endure more than 1,000 charge cycles. For the sake of comparison, most electronics are considered well-built if they’re able to withstand 500 cycles. When you look at the batteries inside the typical pair of earbuds, wireless mice, tablets, and smartphones, you’ll find that 500 cycles are actually pretty close to what you end up with. So doubling that makes these pretty durable as far as batteries go.

Of course, even rechargeable batteries will decay over time. It’s just natural decay, like using a pencil will cause the pencil to eventually wear out. These batteries are able to be recharged about twice as often as older NiMh batteries, which were often made to last for about 500 cycles. Though not many of them seemed to last that long because older rechargeable batteries also had issues with overcharge protection.

When it comes to protection, Pale Blue uses an integrated safety circuit in order to better shield the battery from harm. It also follows a variety of safety certifications, including RoHS, FCC, PSE, CE, and others.

Millions of batteries get thrown away, every day. Because of how batteries are made, it’s pretty tedious to recycle them. But at the same time, it’s important to do because they’re not exactly biodegradable. Over the span of its lifetime, a single Pale Blue battery could theoretically prevent you from needing to use 1,000 regular batteries.

So in terms of eco-impact, going rechargeable is far better than going disposable. Even if you’re only going to end up using the battery for one-third of its potential, you can easily find yourself getting a 1-rechargable per 300-disposable ratio. And that makes a lot of sense for anyone who’s committed to protecting the environment.

Do you use AA or AAA batteries? If you do, then you can probably make good use of the Pale Blue. You do have to keep in mind that even if you’re not using these batteries, even rechargeable batteries have a shelf life. So if you’re not running down their 1,000 cycle timer, then you can probably expect these things to stick around for the better part of five years without having to worry about their performance being impacted in a negative way.

For people who use rechargeable AA or AAA batteries on a regular basis, Pale Blue can be huge. They could help you save quite a bit of money and have a positive environmental impact at the same time. Plus, it’s much easier figuring out how to recycle 4 pairs of batteries instead of feeling guilty about throwing away 4,000 of them.