Part of the problem with having your ears blocked off with earbuds is that you’re sending a message to the world. It’s a message that says you’re inaccessible and busy. It also means you’re unable to hear the ambient noise around you, and so may become totally unaware of what’s happening in your area. You could inconvenience others, or even become a danger to yourself.

For some people, in some circumstances, blocking noise can be a great thing. It might even be the reason why they want to wear headphones. But sometimes it’s necessary to stay aware of your surroundings, especially if you might end up having to interact with people. And for those kinds of circumstances, you can scarcely do better than bone conduction headphones.

Lokmat isn’t exactly a big brand name, but bone conduction headphones are enough of a niche product that it’s actually the more obscure brands that usually have the better pairs on offer. Here you’ll find headphones with a slightly unusually wide array of style options. You’ll also find headphones that are surprisingly well made, and almost clearly intended for people who are driving, cycling, or otherwise working in an environment that requires them to maintain attention. 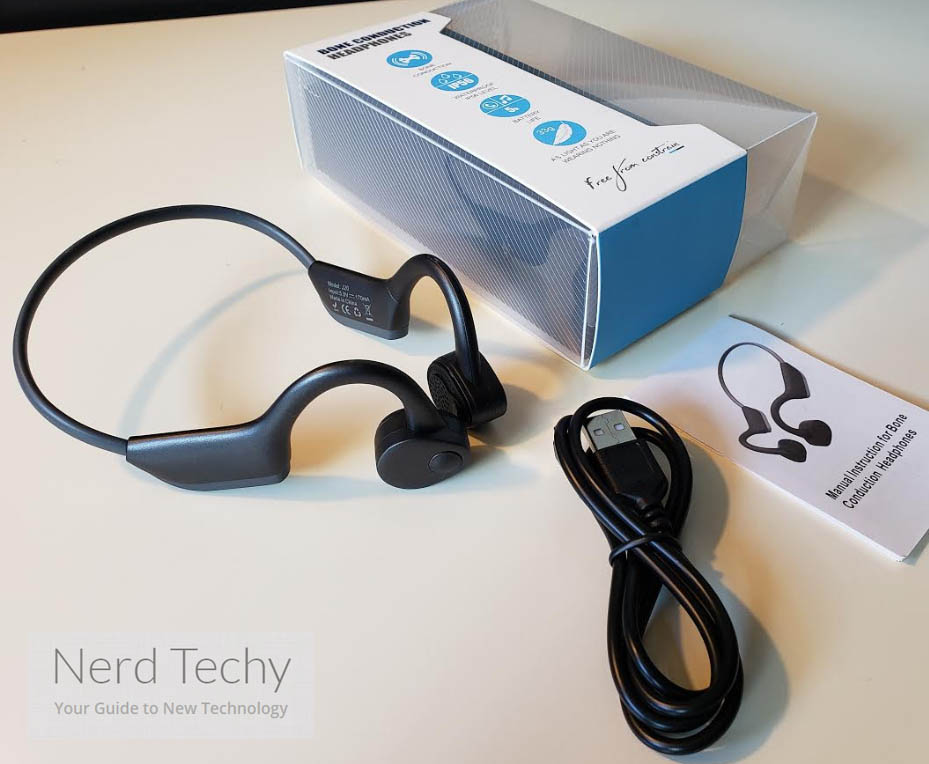 But like any pair of headphones, bone conduction headphones have a lot of challenges they need to conquer in order to deliver higher quality performance. They’ve got to have a solid wireless connection, and they’ve got to have a powerful batter that can hang in as long as you need it to. The list goes on. So how does Lokmat address those kinds of concerns?

Since not many people are familiar with bone conduction tech, it’s worthy of a short introduction. Bone conduction headphones are not actually a new technology. You could find examples of these being used as far back as the 1980’s. But over the past few years, this technology has really taken on a new life for itself. 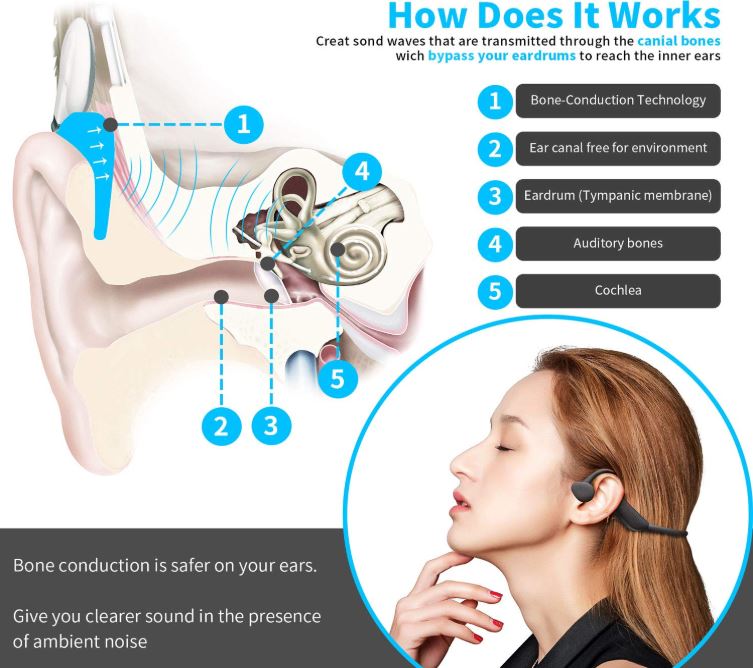 Keep in mind that sound is just vibration. It can be carried by water, and it can be carried by air. It can even be carried by bone or cartridge, which is the general idea behind bone conduction headphones. Vibration is moved from the cochlea on the ear, over to the tibia. This design can help people avoid hearing damage. And more importantly, your ear canals are not blocked at any point during this process.

In other words, you’re able to continue hearing the environment around you, with perfectly normal hearing. You’re able to maintain contact with the people around you, or otherwise be alert to the presence of ambient noise. Waiting for a food delivery and don’t want to miss hearing the knock at the door? Your ears aren’t stuffed up, so the Lokmat Bone Conduction Headphones are great for those kinds of circumstances. 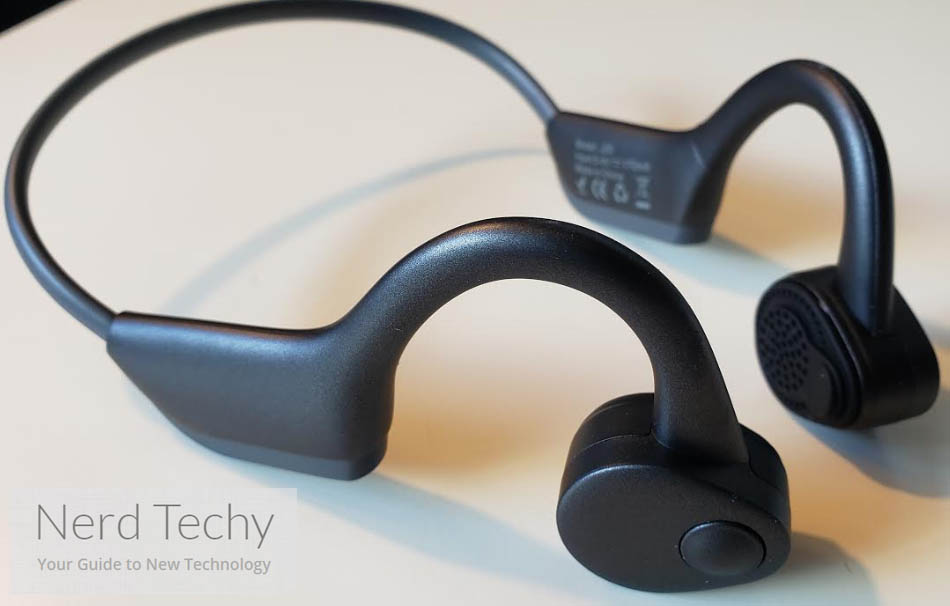 These headphones use a sports-friendly design that is a combination of ABS plastic and a core of titanium alloy — that makes them both sturdy and lightweight. The titanium alloy is supposed to withstand around 15,000 bending forces before it needs to be replaced. Basically, no matter what shape you bend it into, it will return to the original shape with great reliability.

Aesthetically speaking, Lokmat’s Bone Conduction Headphones are available in green, black, and white. Having a couple of style options is nice, considering you typically do not have those style options when considering. Additionally, the IP56 waterproof design allows them to hold up through walking, running, ice skating, diving, and so forth. You would probably want to stop short of intentionally submerging them in water, but you pretty much don’t have to worry about a little drizzle taking them out.

Along the base of the headphones, you’ll find a small touch control interface. At the base of the interface is an LED indicator used to help you figure out how the battery is doing. Above that, there’s a volume down button that stands independent of all the other buttons. And above that is a multifunction button that is supposed to turn the volume up, but is also supposed to power on or off the headphones, depending on how long you hold the button. 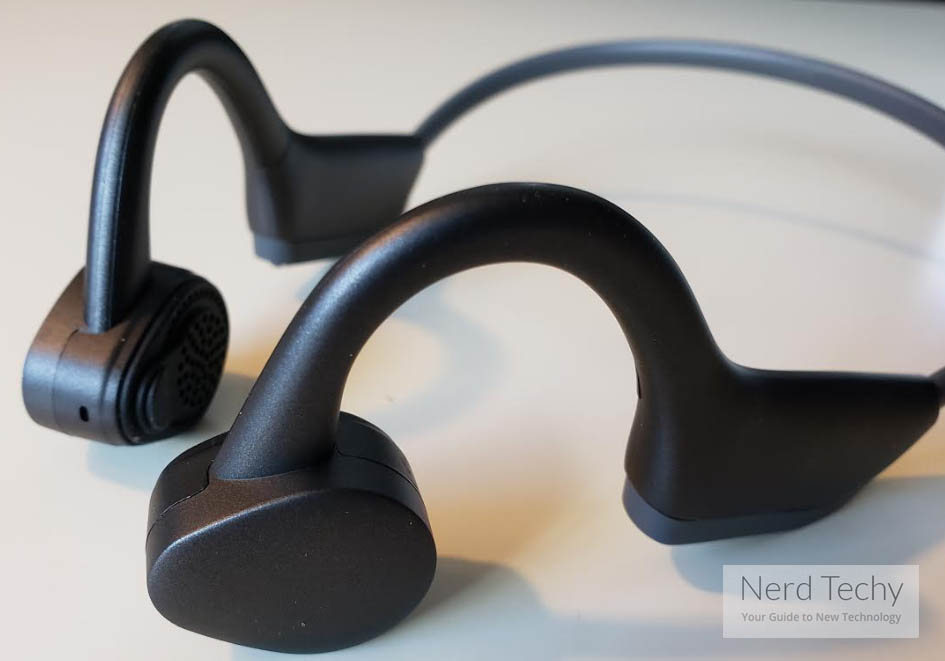 So when turning the volume up, you’ve got to tap carefully and gradually increase the setting, instead of holding the button and shutting your headphones off. But that is really only a small design flaw. Right above those volume buttons, you’ll find the USB charging port. And it’s over on the outside of the earbud that you’ll find the rest of the controls.

From the outside of the earbud, the rest of the controls are managed with a single large multifunction button, which can be tapped in various rhythms to access the play, pause, track skipping, and calling features. Enough taps will also give you access to the voice assistant which is set to default on your mobile device. Fortunately, these buttons are a lot more difficult to mess up during operation.

For their wireless connection, these earphones are using Bluetooth 5 along with an EDR chip. The result is a wireless connection that’s able to run out towards 45ft. That also helps make these headphones compatible for both Android and iOS users. So basically any smartphone, tablet, or PC with a Bluetooth connection should have no problem connecting up with them. 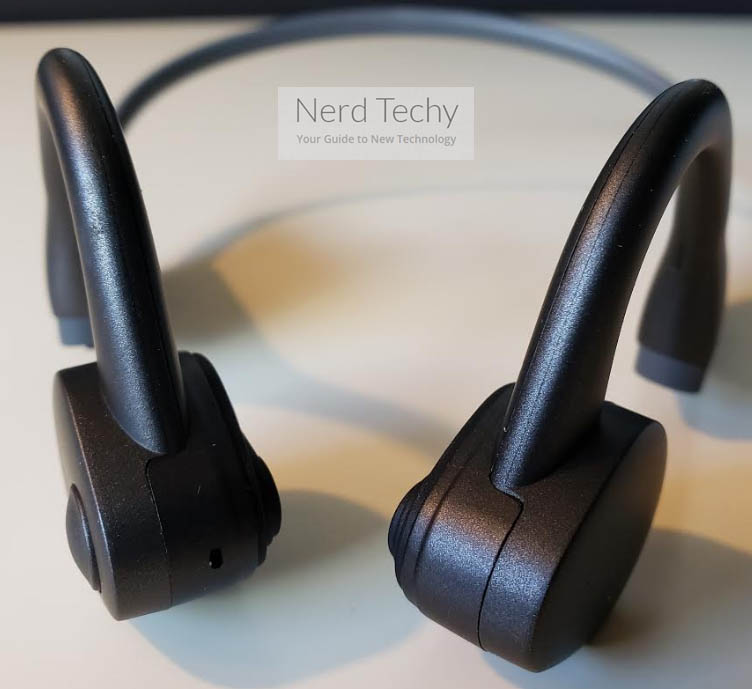 The Lokmat Bone Conduction Headphones are able to fully charge in about two hours. Once charged, you can expect around five hours of playtime and five hours of talk time. That’s about 20% above average for headphones of this type, largely because of the difference in how much energy is necessary to create audio using bone conduction.

Notably, standby time is almost three weeks in total, so you typically don’t have to worry about putting these headphones aside between uses. But since there’s no charging case, you will eventually need to think about recharging them. It might also make sense to pair them up with a power bank, like the one we recently reviewed, Omars Beast. 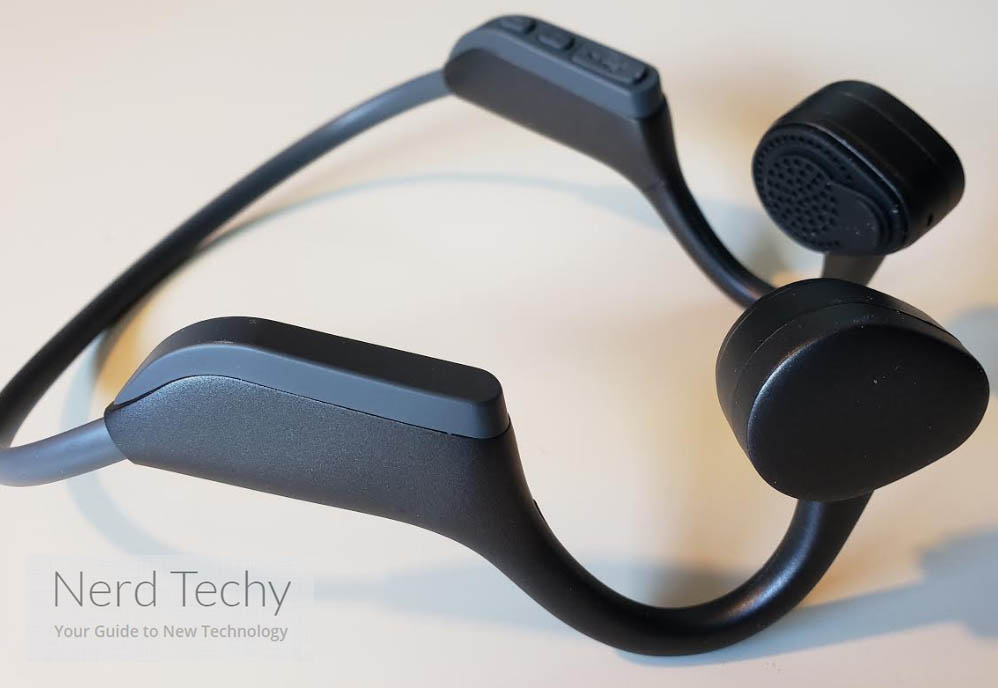 Bone conduction technology can sound reasonably good. It’s distinct from ordinary headphones, but at the same time, it’s not possible to hit the same level of ear-crushing bass, nor the same depth of clarity in the treble range. Because if there’s one advantage of hovering a little speaker a few millimeters away from your ear, it’s that the positioning makes it possible to blast your ear with clarity or deep tones.

That’s much harder to do that while you’re relying on bone conduction. With that said, these sound great, relative to bone conduction headphones. They allow you to enjoy your music and it doesn’t sound like you’re really sacrificing a bunch of sound quality in the process. Though it might be disorienting that you can still hear your environment so clearly.

Part of the reason why people use headphones in places like the gym is to help block out the sounds of their own running, or their own breathing. That’s not going to be possible with headphones like these, which were designed to help keep you in touch with your surroundings. Staying in touch can also muddle the quality of your audio if you’re in a quiet place. But at least other people can’t hear your music! 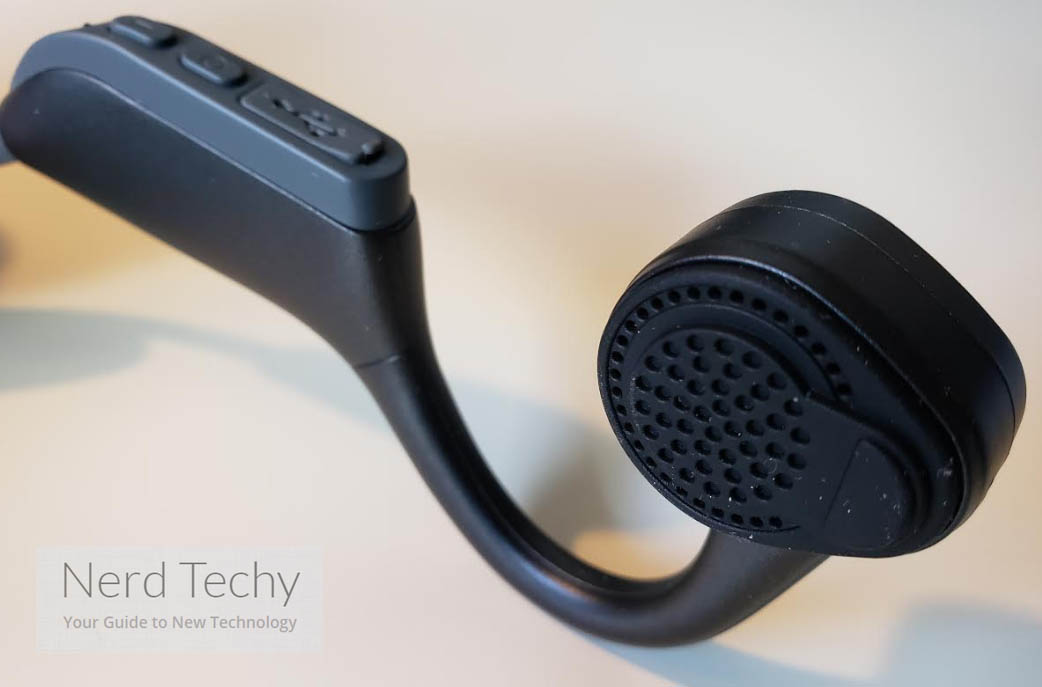 The microphone quality isn’t remarkable, it’s quite clear that the mic is actually a bit of an afterthought. You can’t totally blame Lokmat for this, however. While Bone Conduction headphone have a number of cool advantages, call clarity isn’t one of those advantages.

During a call, you can hear someone talking clearly but because there’s nothing blocking your ear canal. But it can actually be surprisingly hard to focus on voices while still hearing noise in your ambient environment. That’s something that can be alleviated by not talking in a noisy environment, using earplugs, or even just putting a finger to your ear. But having to take such steps should indicate that these are probably not the best headsets for people who are only interested in taking calls.

Finding earbuds that fit properly can be tricky. They’ve got to be sized properly for your ear, and even when they are, there’s some inherent discomfort with shoving an object inside your ear canal. In this case, the pressure against your ears is really no greater than the pressure of wearing a pair of sunglasses. So if you’re comfortable wearing glasses, then you can probably expect the same wearing Lokmat Bone Conduction Headphones. 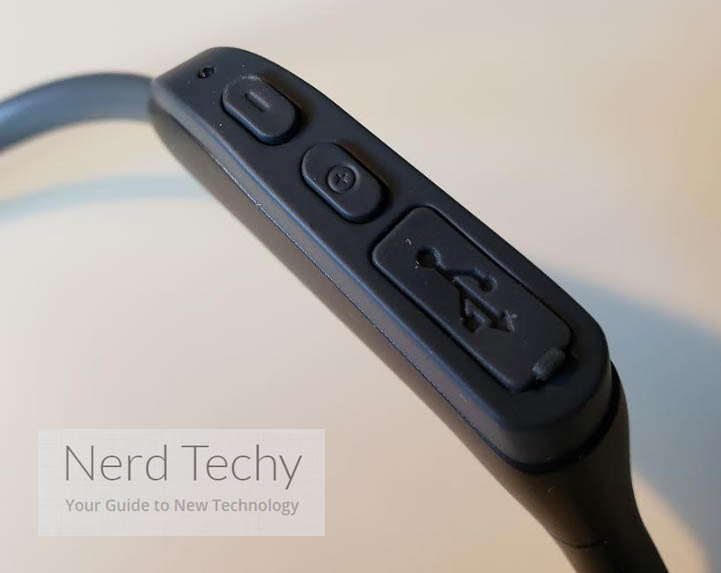 Another thing that may be worth mentioning is bone conduction is considered safer for your ears. That’s for a number of reasons. First and foremost, you can’t get the same extremely high levels of volume from these headphones. And even though you can get your volume up to nice levels, that volume isn’t being tunneled straight into your ear canal. Though these earbuds don’t come with much in the way of extras, they do include a one-year warranty.

Lokmat Bone Conduction Headphones are probably not the right choice for someone who’s interested in blocking out environmental sounds. Though technically speaking you could use this alongside a pair of earplugs and end up with a very interesting effect because you would be able to create much more focus on the music. 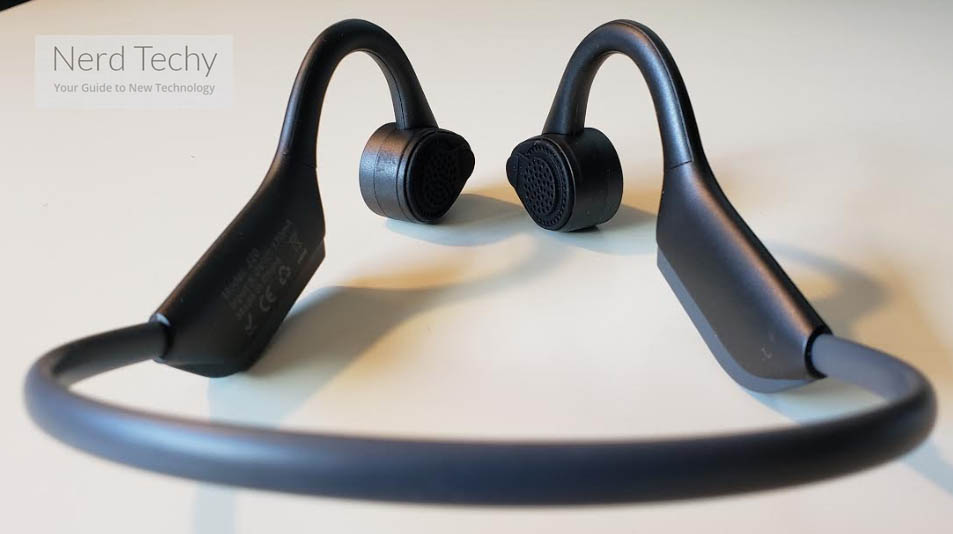 But that’s not really the selling point for a pair of headphones like these. Lokmat made these headphones for people who want to remain aware of their environmental surroundings. That makes them potentially great for people who are driving a vehicle or jogging around an area where they have to look out for other people.

It’s also cool that you don’t have to worry about these headphones slipping out of your ear as you run. Their construction is pretty solid, and they really ought to last longer than an ordinary pair of headphones. Though ultimately if you were using these headphones chronically for years, then you would probably end up getting between 3-5 total years of lifespan before they would need replacement.