In the wireless headphones marketplace, True-wireless earbuds are the current cream of the crop. These earbuds are popular among commuters, joggers, and anyone who’s sick of having their movement restricted by clumsy and awkward cables.

Although true-wireless earbuds have been on the market for a while, it’s only recently that they’ve started to get good. Early models suffered from disappointing battery life, poor fit, and a high price. Fortunately, the market is starting to turn around. Today, consumers can enjoy wireless headphones that are cheaper than early models, and in many cases better.

We had the opportunity to try out the new Losei Bluetooth Headphones. Although they’re from a relatively unknown manufacturer, they’ve received rave reviews from buyers. Sold at a price that won’t break the bank, these compact little earbuds are certainly tempting. Can they hold up in the real world? To find out, we tested them for ourselves. 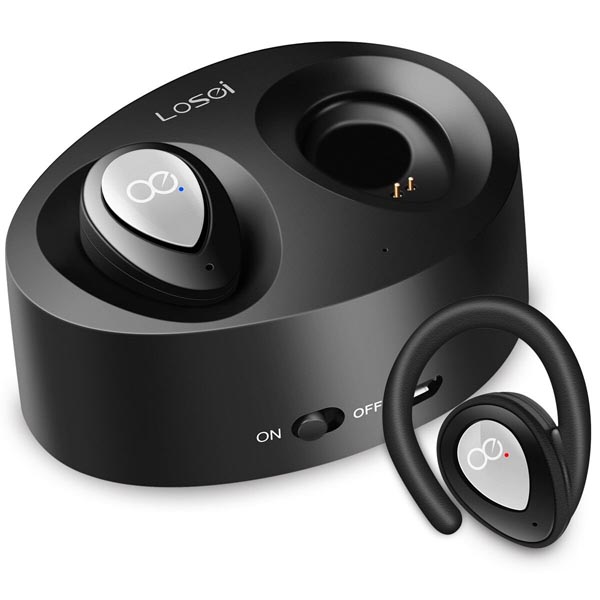 There are two parts to the Losei Bluetooth Headphones. The earbuds are compact, although a little larger than wired earbuds. They have a flexible ear hook to help them stay firmly in place. Because there is no physical connection between the two earbuds, they each operate independently. This gives consumers a lot of flexibility in how they’re used, making them a great alternative to a Bluetooth earpiece. The second part looks a bit like the base you’d use for a cordless phone. This is the battery case, and serves to recharge and store your earbuds while you’re on the go.

This design is fairly common, and usually works quite well. But to earn our approval, Losei is going to have to overcome common issues with comfort and battery life. 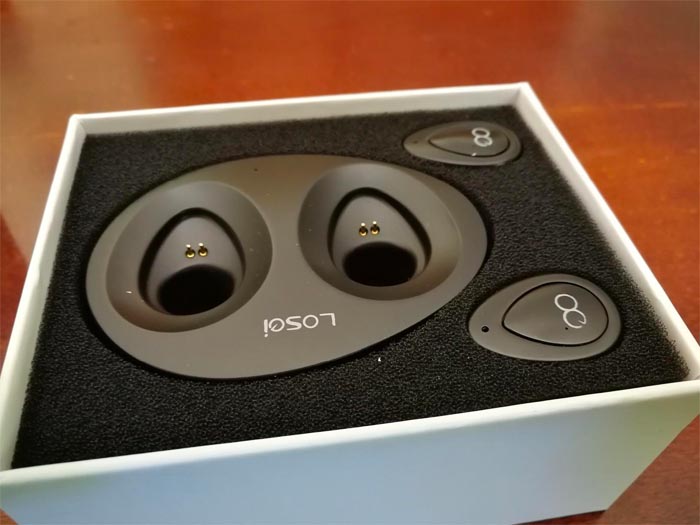 The simple smooth lines of the earbuds enclosure are visually appealing, but remain fairly unassuming. Their teardrop shape helps to give them a thinner appearance, even though they are a little larger than the earbuds you may be used to. The basic black model is blank with the exception of Losei’s logo, although you can also purchase models that come with a red or silver hue.

When you first pick them up, you might be surprised at their size. But they actually look quite a bit smaller when worn. The ear hook wraps on top of your ear and remains hidden. From the outside, all anyone will see is a basic earbud.

The battery case is quite a bit larger. It’s an oval shaped docking station with a large flat base. On the top, two cutouts allow you to slip the earbuds inside. They rest on top, using two metal pins to charge them back up. You can charge the battery case with any standard Micro-USB charger.

One thing worth noting is that the battery case isn’t very case-like. Some manufacturers produce cases that easily slip into your bag or pocket. We’d consider this one to be a little more like a docking station. It sits on your deck much more nicely than a standard case would. This is better for people who want to throw their earbuds on their bedside table at night, but might not be as appealing to people who want to take the case with them while they’re on-the-go. Because the earbuds don’t really clip into the case, if they’re not stored upright it’s unlikely that they’ll make enough contact to charge. 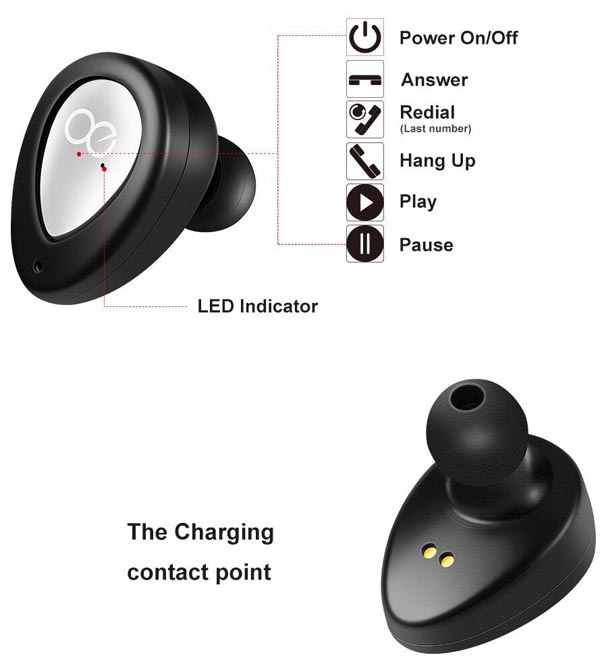 These earbuds use Bluetooth 4.1. Although it’s not the latest protocol, it offers all the features necessary for this style of earbud. The Bluetooth signal runs at a lower power, which allows the battery to last longer. Despite this low power mode, you still get roughly 30 feet of range. Even for full-size Bluetooth headphones, 30 feet is impressive.

These headphones support three key technologies that Bluetooth 4.1 brought to market: EDR, A2DP, and AVRCP. EDR stands for enhanced data rate. This allows higher bandwidth audio to be broadcast, ensuring that there is no compression loss. This keeps your audio sounding crisp and clear – something we look for in most modern headphones.

A2DP and AVRCP are signal processing technologies that can self-correct errors. If you’re using the earbuds towards the end of their range, these protocols reduce the likelihood of dropouts or noise. 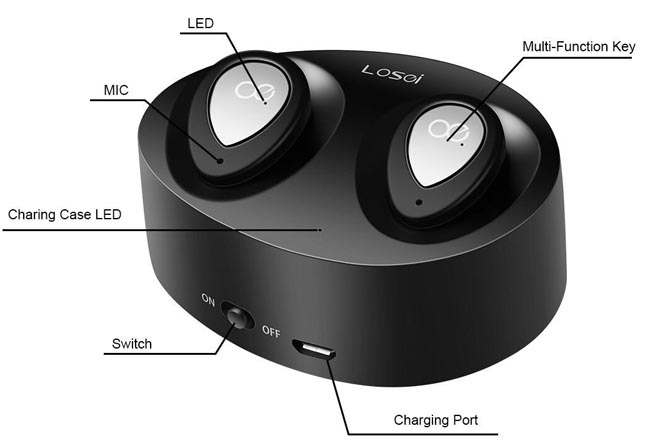 Each earbud has a 40 mAh lithium polymer battery installed. In terms of capacity, this is a little lower than usual. However, because the earbuds use a low power Bluetooth chipset the battery life isn’t impeded all that much. The earbuds themselves can go three hours between charges. This can give you three hours of music, three hours of talk time, or three hours of any audio you like.

The earbuds don’t actually turn themselves off. They’re always on, although they do have a low power mode. When in this mode, they can last for roughly 40 hours. The only way to take them off of standby is to put them in the charger. In terms of real world use, imagine that you’ve been carrying them around in your pocket all day but haven’t actually played any audio. After 13 hours away from the charger, your actual time in use would be reduced to roughly 2 hours. This isn’t a huge deal if you keep them in the case, but something you might want to note.

The battery case itself has a 450 mAh battery. After you fully recharge the case, you can charge your earbuds about 3.5 times. This means that you can enjoy 10.5 hours of listening time in between charges, but only in 3 hours increments. This might seem a little low compared to full size Bluetooth earbuds, but this is actually pretty competitive for true-wireless models. 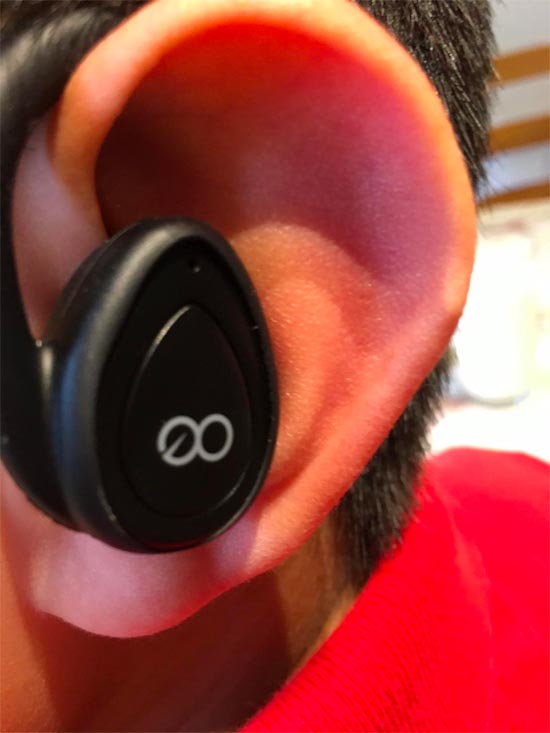 The sound quality is definitely acceptable. They’re roughly on par with the headphones included with Samsung and Apple phones. Voice is nice and clear, treble is soft and slightly understated, and bass is present.

They’ve got a bit of kick to them, so you can certainly enjoy some of the more upbeat tunes. If you’re into something soft and acoustic, the low end isn’t too overblown. This creates a nice harmonic sound, which is absolutely enjoyable with most types of music.

The one area they lack is in clarity. For the money, we didn’t expect much more. But if you’re looking for audiophile grade headphones, you might want to look elsewhere. 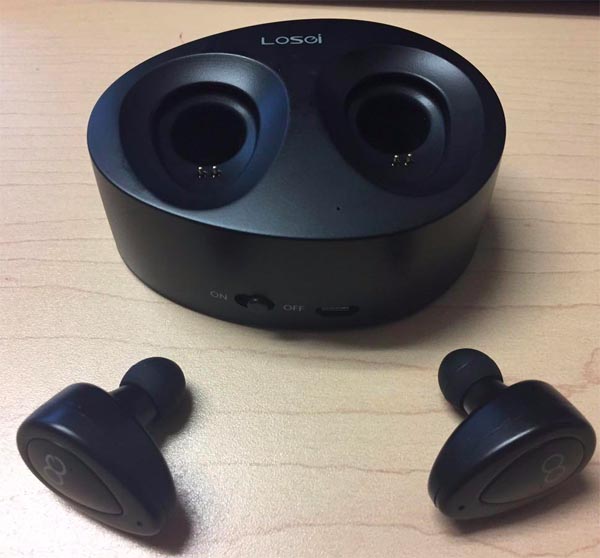 One of the neat things about true-wireless earbuds is that you can use them independently. To pair, you need to hold the button on the side of the earbud and connect to it from your phone. You can pair both earbuds at the same time, or you can only use one. If you had an earbud sitting in the charge case, a friend could easily borrow it and use it with his own audio source.

These earbuds are also suitable for taking phone calls. When you have a call incoming, just hit the button on the side to answer it. The call will only play back in one ear, so if you intend to use these as an earpiece there is no reason to use two. The microphone was pretty impressive, picking up our voice accurately and without distortion. In our eyes, this is on par with most modern cellphones.

Although these earbuds were pretty comfortable, they don’t have a very tight fit. If you’re commuting or just walking around town, this is an asset. But if you’re out doing intense physical activity, you’ll probably find that they don’t stay in your ear very well. There are a number of fitness specific earbuds on the market that don’t have this problem, so if you’re looking for something to use in the gym we wouldn’t recommend these particular earbuds. 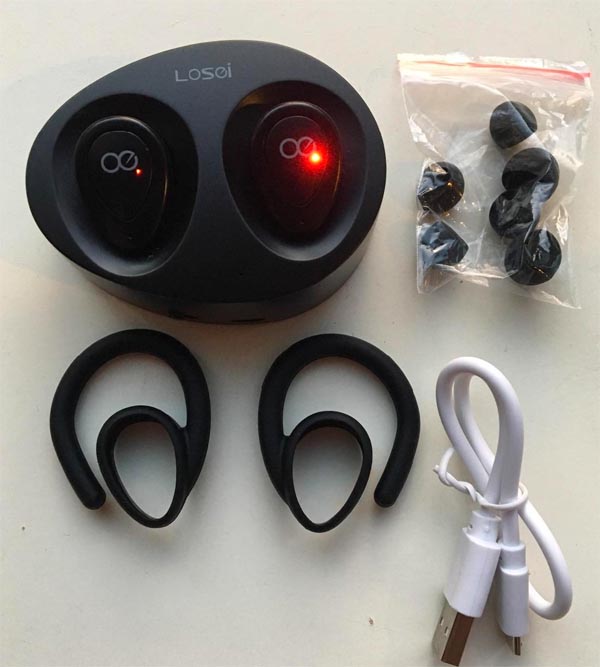 For the money, the Losei Bluetooth Headphones are more than adequate. They’re comfortable, easy to use, and have a pretty decent battery life. The sound quality isn’t going to blow you away, but it’s not going to disappoint either. This is a tough price bracket for manufacturers to compete in. Once in a while you find a gem, but most of the time you’ll find nothing but disappointment. For that reason, we were impressed that this small manufacturer has such a clear commitment to quality. Whether you’re buying these for yourself to use full time, as a backup, or as an affordable gift for a friend, you’re not going to be disappointed.

If you have a little more money to burn, there are plenty of high end true wireless earbuds on the market. We’ve written up a review of our top three choices, so if these earbuds aren’t impressing you you’re sure to find something in this list that will.