Which makes picking an entry-level gaming headset mostly a matter of forming expectations, and then finding equipment that’s able to meet those expectations. Plus, it doesn’t hurt if your headset looks cool.

When it comes to gaming headsets, there’s really two philosophies of design. The first is to make the headset look like any ordinary pair of headphones. The second is to make the headset look distinctly like it was intended for gamers. That might include bright coloring, LEDs, or a uniquely shaped chassis. Interestingly, the LucidSound LS1 Premium Chat Gaming Headset combines two of the three into their design. 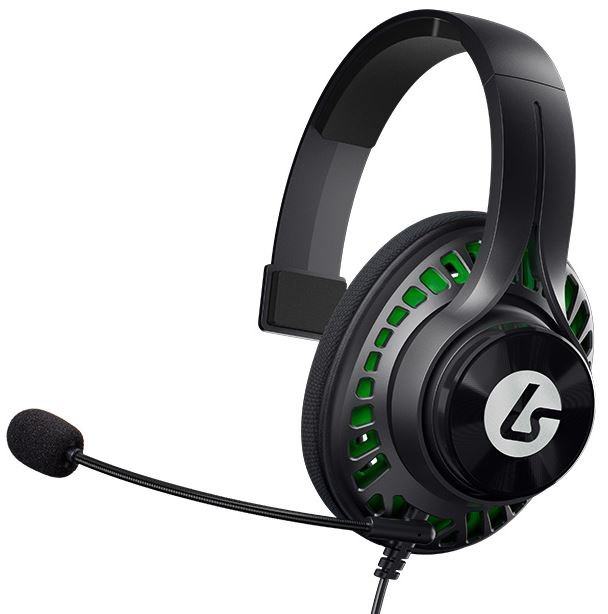 They didn’t go the route of using LEDs because that would’ve unnecessarily added to the cost of the headset. And this headset is really aiming for value above all else. Though the fact it has a cool aesthetic certainly helps. In any case, the LS1 is designed for gamers. It’s supposed to be a heavily communication-focused type of headset, specifically made to be compatible with the PS4, Xbox One, and PC.

But because the LS1 is an entry-level headset, it’s not going to be able to provide a lot of fancier features, like a multiple-mic setup, or a detachable microphone. Though for the basics, the LS1 does manage to get your bases covered. Whether or not that will cut it for you personally will at least partially depend on your own personal preferences.

For starters, one thing worth highlighting is there are some easy to use controls, allowing you to adjust the volume on the over-ear control console. The controls are cleverly hiding away on the on the outer ear. You just twist the large knob to gradually increase or decrease volume as you see fit. But there aren’t full-fledged media controls onboard.

For instance, there are no calling features for people who are looking to take calls over VOIP. You’ll find no play, pause, skip, or mute buttons. But volume is really the only essential control for a pair of headphones like the LS1, and this headset is all about essentials. You can also see that on the chassis, which is mostly black. But it has a silver LucidSound logo on the left ear-cup, and the open-ear design showing bright green highlights within. 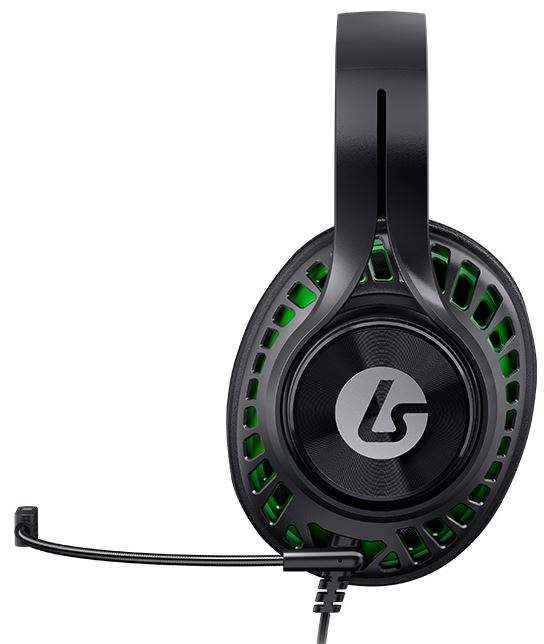 You probably noticed that the LS1 appears to only be half of a headset. The general idea there is to allow you to maintain awareness of the environment around you, but without actually forcing you to lose communication with your squad. That way, you can enjoy the ambient noise coming from your television or speaker system.

For someone who’s using a nicer sound system, it doesn’t make sense to use a pair of headphones all the time. But at the same time, you probably still want to be able to hear voices clearly in your ear. And you probably want to be able to communicate clearly with other people, even though there are loud sounds going on around you in your play area. That’s essential the kind of circumstances where the LS1 was designed to perform best.

Though there are plenty of other uses for ambient sound awareness. Maybe you have to look after someone, and can only give half your attention to the game. Whatever the case may be, the open-ear design is pretty unambiguous about what it’s made to do.

Outside of communication features, these headphones were made with considerable attention to comfort. Everything rests of a light weight frame. The ear padding is a little thin. It’s closer to the kind of padding thickness you might expect from more portable headphones. But given the lightweight nature of this equipment, it seems that less padding is needed in general. For instance, the headband isn’t padded at all. Though, that doesn’t end up being problematic because there’s not much pressure bearing down on your head to begin with.

The over-ear design is ideal for longer play sessions. By contrast, on-ear headphones compress your ears against your head, which will eventually lead to discomfort. In-ear headphones tend to penetrate the ear canal, which is uncomfortable over longer periods of time as well. Plus, they have a far narrower soundstage. So using larger over-ear headphones like the LS1 isn’t only good for comfort, it’s good for several different aspects of design.

Because this is an asymmetrical headset, the weight isn’t perfectly evenly distributed across your head. That has the potential to lead to a number of comfort issues. But because they’re only using one ear-cup, the weight of this headset is also much lower than most gaming headsets. And weight is the antithesis of long-term comfort, which is something most gamers are looking to find. They’re using an incredibly lightweight design, which helps top prevent the uneven nature of the headset from becoming a comfort concern. Though there’s still a distinct difference on terms of the amount of pressure being distributed towards one side of your head. 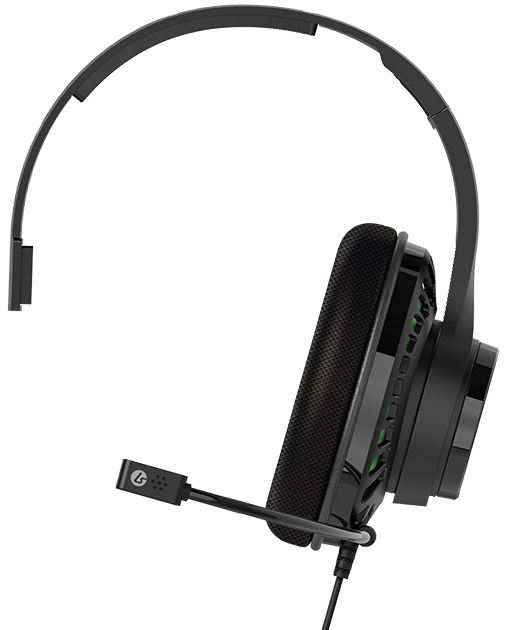 The LS1 do not make use of wireless connections. Instead they’re running a stable 6ft wired 3.5mm audio cable. The cable is slightly thick, but is still only covered with a plastic jacket. You can’t really expect to find woven nylon coverings for headsets in this price range though. Material construction is something that is almost invariable going to take a hit when you’re looking at entry-level gear like the LS1.

Headphones like these are supposed to be able to last for the better part of three or four years. But it does partially depend on how well you manage to take care of them. If you are not taking care of them properly, it’s possible to short out the wire in as little as a year of persistent use. But even if you’re horribly abusing these headphones, being able to get a year out of them isn’t bad relative to their inexpensive price. For people who are taking care of them, that four-year estimate is seems plausible.

The LS1 are constructed with extra-large 50mm audio drivers. That’s a fantastic start – they haven’t held back at all on the size or range of the included audio drivers. Another thing they’ve done is made the ear-cups with an open-back design. This allows music to leave the backside of your headset, and flood into the area around you. In other words, the people near you will be able to hear a lot of noise bleeding out of your headset.

You also have no protection from noise coming in through that ear. The open back design allows the earcup to not interfere with the audio coming from external sources around you. Which is the point. Because if you’re making use of a nice surround sound system, or simply trying to hear your TV, you don’t want one ear to be blocked while the other is open.

So while this headset might not be ideal for wearing with the intent of trying to not disturb others, it’s quite ideal for someone who’s gaming with their volume up. Plus, since these are larger drivers, you can expect somewhat deeper bass signature. That’s great for the kind of immersion you might want from your games, and it means the drivers don’t hold back on call clarity, either.

Speaking of call clarity, with an intro-level headset, you can’t have enormous expectations from your headset’s microphone. But it would be fair to say the LS1 is using a very average microphone. Under different circumstances, that might be a bad thing. But considering the inexpensive nature of this equipment, running an average mic is really pretty close to a best-case scenario.

It doesn’t have any special extra noise cancelling features. At least, apart from the boom that’s stuck to the mic, which protects from blowing sounds and other popping noises coming out of your face by accident. At least the microphone was tuned to try and pick up the human voice. So it’s aimed at presenting your voice in a clear way to listeners, which is really the basics that a gamer will want on their gaming headset. And once again, the basics are what the LS1 is trying to cover.

One thing you can say in its favor is that it’s a very flexible boom mic, which allows you to potion the microphone directly where you need it. Sometimes that will be right in front of your face, other times you might want it set off to the side. The flexibility and range is there. Though sadly, the mic itself cannot be removed, it’s built-in to the chassis. Since these mics are a little fragile, you do have to take extra care of the headset while it’s set aside and not being used. 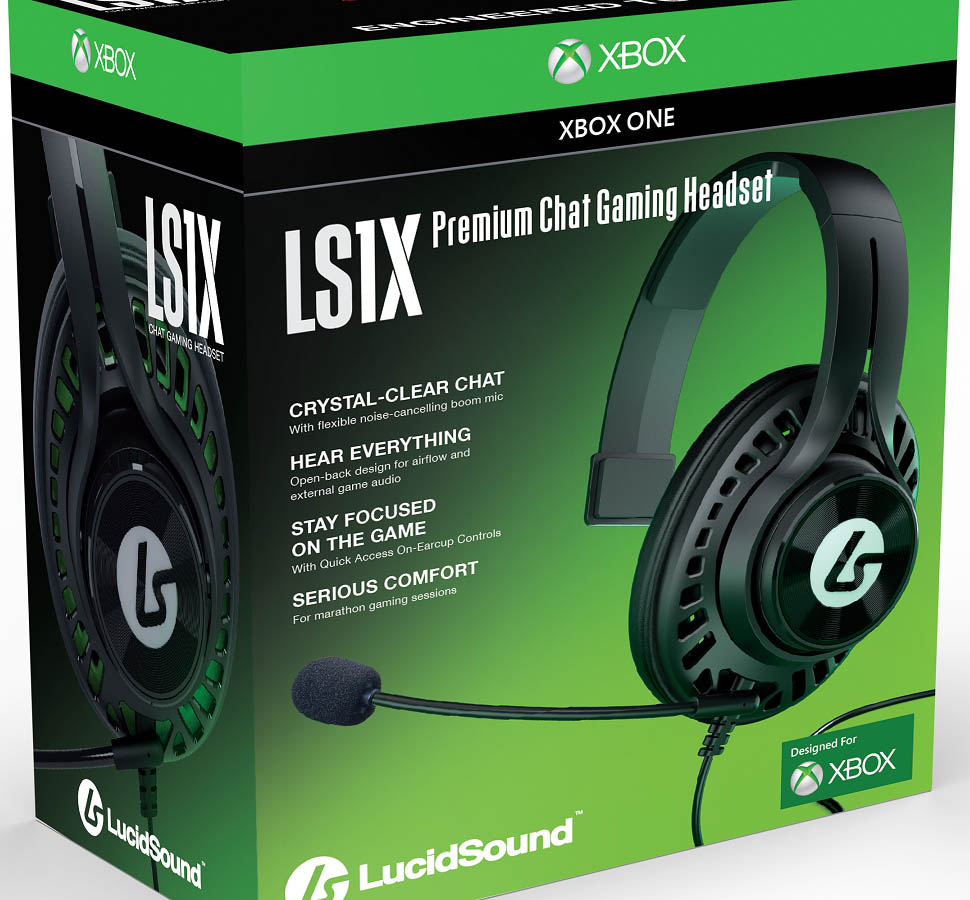 Who Should Choose the LucidSound LS1 Premium Chat Gaming Headset?

It should be clear that the LS1 is not designed for every kind of listener. This headset was made for a very niche purpose. It’s supposed to be for people who want to maintain ambient awareness of their surroundings while playing. And for people who are going to be playing around a surround sound system, or playing with their TV volume up, that can make a lot of sense. The open-ear design shows that they’re really dedicating to making the LS1 the best at what it does.

When it comes to audio, the one earcup does provide a pretty clear soundscape, clearly intended to carry voices. The microphone is much the same. Between the two, it’s possible to stay in contact with your teammates without having to wear a more traditional, bulkier headset. So if you find yourself in circumstances where you need to maintain ambient awareness around you, the LS1 is worth careful consideration.