While certainly not the most important of humanity’s achievements, it’s hard to name an industry that’s seen more explosive growth than video gaming. Far from the blocky, 2 dimensional, monochrome games of the 1980s, modern video games are visual marvels. With unbelievable graphical fidelity, at times it can present a challenge determining a video game from real photos or videos. Also, the “beeps” and “bloops” that passed for sound in the early days have been replaced by full orchestral soundtracks with premium sound effects.

Essentially, video gaming has moved from a fringe hobby for children and nerds into a mainstream entertainment juggernaut. Many top tier games have production budgets that can rival Hollywood movies, and studies show that players are spending significant hours every day engaged with the games of their choice.

Some try to blame video games for deeper social problems like decreased interpersonal interaction, personal development and education, or even violent behavior. While the jury may still be out on the full societal impact of gaming, it’s abundantly clear that the video gaming industry is bigger than ever with few signs of slowing down. Aside from just the games and systems themselves, video gaming has spawned an entire ecosystem of accessories to enhance your playing experience.

The unique design of the LucidSound LS15X gives you flexible, comfortable listening options for extended playtime with the Xbox family of gaming consoles. As the first officially licensed wearable personal audio system, the LS15X delivers unprecedented convenience, comfort and audio quality. Let’s take a look at how a good headset can really up your game today. 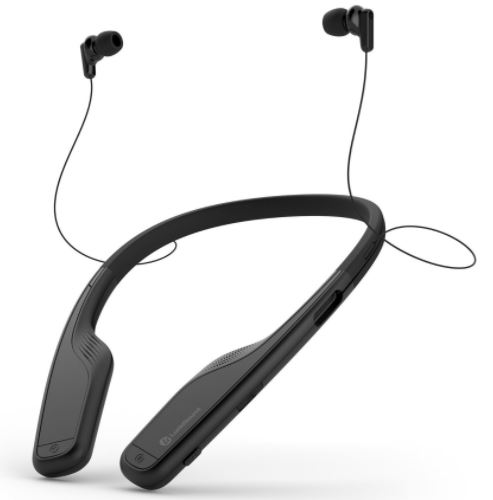 Problems With Other Gaming Headsets

If you’ve only played games casually, you may have never considered using a headset. For some players, you might simply plug in your Xbox console to your TV and run the audio through the TV speakers.

However, there are countless reasons that you might need a headset. First, if you play at night or share space with family or roommates, you’ll make a lot less enemies by not blasting your audio throughout your home.

Also, with the rise of online collaborative play, certain games require the ability to communicate verbally with your teammates. While you could play without a microphone, you and your team would find yourselves at a sever disadvantage without the ability to coordinate.

While Microsoft developed wireless Xbox controllers a considerable time ago, headsets have always been another story. With the rise of Bluetooth, many gamers have longed for the ability to simply connect their favorite Bluetooth headset, but the Xbox has always lacked Bluetooth support.

Previously, two headset connectivity options existed. First, you could plug a corded headset into a jack on the Xbox controller itself. While not a terrible solution, it does hamper the convenience of a wireless controller when you have to have a cord dangling down in between your hands. It isn’t an uncommon experience for a sudden hand motion to yank the headset cord loose.
Alternatively, some manufacturers worked around the limitation by releasing wireless headsets that communicated with a base station that must physically plug into the Xbox console. While this does accomplish the same task, it’s an additional complication and expense.

Unlike either of these solutions, the LucidSound LS15X utilizes the same connection protocol as the wireless controllers. This way, it can pair directly with your Xbox console without complicating the matter with additional cords or base stations. 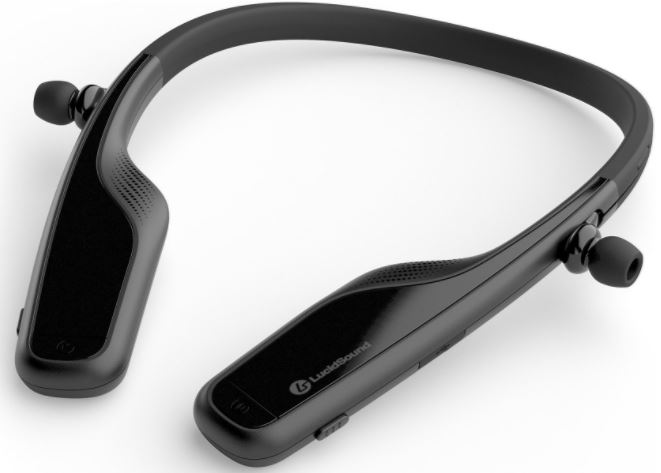 LucidSound has developed other traditional style headsets, such as the LS35X, but the LS15X brings something very different to the table.

While the LS35X features fairly standard looking earcups and a boom microphone, the LS15X instead consists of a lightweight, plastic horseshoe-shaped device that drapes over your shoulders and neck. From this main section, two thin wires connect to earbuds that can optionally go in your ears or dock into the body of the LS15X.

Once in this docked mode, you’ll discover the real trick behind the LS15X. LucidSound embedded two speakers inside the body of neckpiece. While the earbuds are docked, you can still hear all the audio and team chat of your games.

This gives you the best of both worlds. As many gamers know, extended play sessions with headphones or earbuds can get uncomfortable. Whether physically uncomfortable due to poor fit or poor ventilation, no one wants to leave the game early simply due to bad equipment.

The LS15X earbuds are designed specifically for long play sessions with a comfortable in-ear design to minimize heat. This way, you can maximize sound quality and keep outside volume to a minimum with the earbuds, or choose to rest your ears and keep aware of ambient sounds all without missing a single footstep.

Since the design looks and feels quite a bit different, it can take a minute to adjust. While we weren’t initially sure about wearing the “horseshoe,” soon after we slipped it around our neck we found ourselves forgetting it was even there. The lightweight material and ergonomic design seemed to just become a part of us.

Aesthetically, the LS15X blends into any environment with a solid black glossy on matte finish. While some gaming peripherals seem to try to look space-aged with flashy lights and colors, as older gamers we appreciate that LucidSound’s design keeps a respectable, understated look. 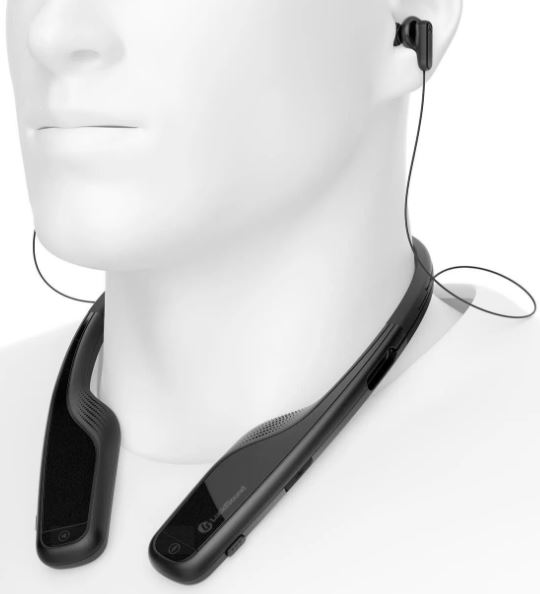 One feature likely to be overlooked by many is LucidSound’s support for spatial sound, with options to enable either Microsoft’s Windows Sonic for Headphones and Dolby Lab’s Atmos for Headphones. Since many consumers don’t have a lot of exposure to spatial sound, we want to briefly explain the technology here.

Standard headphones or speakers only feature two channels, a left and right. This means that, in a game, developers must instruct any and all sound to come out of the left, right, or both channels. All sounds, whether effects, background noise, or soundtrack, get lumped together in one of those two channels.

For older or simpler games, this isn’t a problem. In many modern games, however, knowing the position of your team or enemies can provide you with a tremendous advantage. While knowing if someone acts on your left side versus right can give you a small amount of information, it’s very imprecise.

Enter positional audio. With positional audio technology, game developers can designate any object in game as the source of sound. This allows them to create a highly precise, three-dimensional soundstage where noise isn’t simply divided into two halves.

The benefit to you as a gamer comes from knowing not just that your enemy is somewhere on your left but diagonally behind and above you on the left. This works the way our brains are intended to instantly identify and locate sounds without even consciously thinking about it or performing calculations.

Sonic for Headphones and Atmos are two competitive technologies, and while the LS15X supports both, only Sonic will work directly out of the box. Atmos requires a separate $15 fee to unlock. In our testing, we liked the effects of both but for different reasons. While Atmos created a very rich, almost cinematic experience for movies, we found it didn’t perform as well in games. Sonic created a far more immersive sound environment that increased realism and the in-game knowledge we could acquire from audio alone.

Using LucidSound’s LS15X was a breeze. We found that it paired quickly and easily with our Xbox One S just like another controller. As an added bonus, since we own an Xbox PC controller adapter, we were able to connect it to our primary computer as well for some PC gaming.

The neckpiece, as mentioned, was lightweight and comfortable even during extended use. While the earbuds were comfortable, it was certainly nice to dock them and maintain awareness of our surroundings a bit more. Sound quality was good if not earth shattering. In-game audio was clear and sounds were quite distinct. While we did prefer the sound from the earbuds, the built-in speakers were more than adequate and gave a nice change of pace.

Since listening only represents half the functionality of a headset, we needed to make sure to test the microphone as well. LucidSound claims their microphone is an “Advanced digital microphone for crystal clear communication.” Our gaming partners on the other end reported that we came through loud and clear. The microphone did seem to isolate our voice and keep out background noise and prevent any unwanted, annoying echoing.

All in all, while initially unsure about the neckband design, we grew to like it. With good quality on both the earbuds and microphone as well as the added flexibility of the built-in neckband speakers, we can certainly see the appeal beyond just a standard headset. 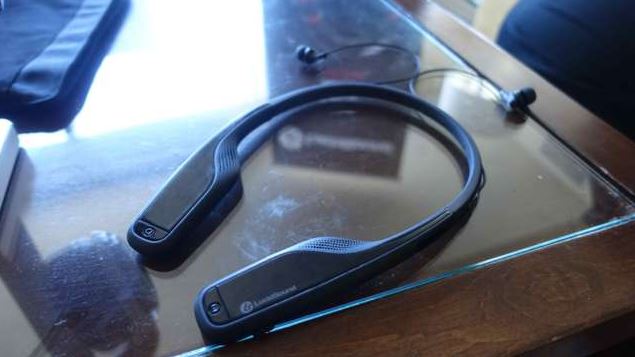 While LucidSound may be relatively new on the gaming hardware scene, they’re already making good impressions on the community. Some gamers, particularly the younger ones, either don’t mind or actually prefer the bold colors and garish designs of some gaming peripherals. LucidSound seems to understand that not everyone wants to look like a futuristic robot. With a professional look and solid quality to back it up, we imagine we’ll be seeing more innovative hardware from LucidSound as time goes on.

As to the LS15X, you’ll need to decide if you like the neckband design. We do encourage you to try it out if you can get the opportunity. Our initial skepticism faded and we found the experience quite enjoyable. While we do love our primary headphones, it’s easy to see where a device like the LS15X could come in quite handy.

If you do prefer a more traditional headset, take a look at LucidSound’s LS35X. While it does have more traditional earcups and a boom mic, the LS35X features the same cordless, dongle-free connectivity of the LS15X.

Both designs work with either the Xbox One, One S, or the newest Xbox One X, previously codenamed “Project Scorpio.” Whether you game on Xbox or a Microsoft Windows based PC, the LucidSound LS15X delivers immersive, spatial audio with the benefit of all-day comfort and convenience.