On the hunt for an affordable projector that won’t break the bank? You picked a good time to shop. In the last few years, projection technology has become more affordable than ever before. Something that would have cost several hundred dollars a few years ago is now available for a tiny fraction of the price.

That being said, it’s still important to be careful. It’s not all sunshine and rainbows on the market. With this new breed of affordable projectors, there are a lot sub-par hardware being passed off as modern.

As consumers, we’ve been trying to answer the question “How low can the price go?” In the early 2000’s, we cracked the sub-$1000 price bracket. Then we broke $500. Today, we’re on the verge of getting projectors for double digit prices. But we need to find the line. At some point, these projectors will become so cheap that performance begins to suffer. With our review of the Mlison Video Projector, we’re going to see if we can find that line. 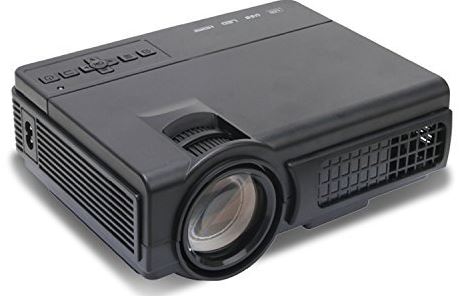 The Mlison Projector sits in the middle of the size ranges. It’s not ultra compact like some of the handheld laser models, but it’s not too bulky either. It would sit comfortably on an end table, and is lightweight enough to mount on a roof. Although the case is made from plastic, it seems surprisingly durable. It’s got a reasonably large lens, and we were happy to see that it was made from glass and not plastic.

It can produce an image that is up to 110 inches in size, which is pretty reasonable for the price. It’s certainly much larger than any television you’ll find for the price. The projector takes 1080p input and downscales it to EDTV resolutions, and has more brightness than most projectors in its price range. Overall, the specifications show it to be a pretty impressive looking projector on paper, so we couldn’t want to see how it performed in person. 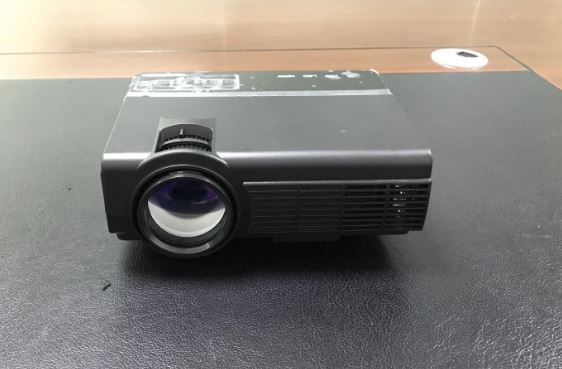 For the price, we were hardly expecting anything industrial grade. But we’ve tested quite a few affordable projectors in the past, and we were still impressed with how well made it is. The design is far from flashy. It’s strictly professional in appearance. But it’s clear to us that all of the visual accents play an important structural role, creating something that we wouldn’t be worried about breaking. This is ideal for anyone who’s going to be chucking this projector in a bag, or carrying it around with them. 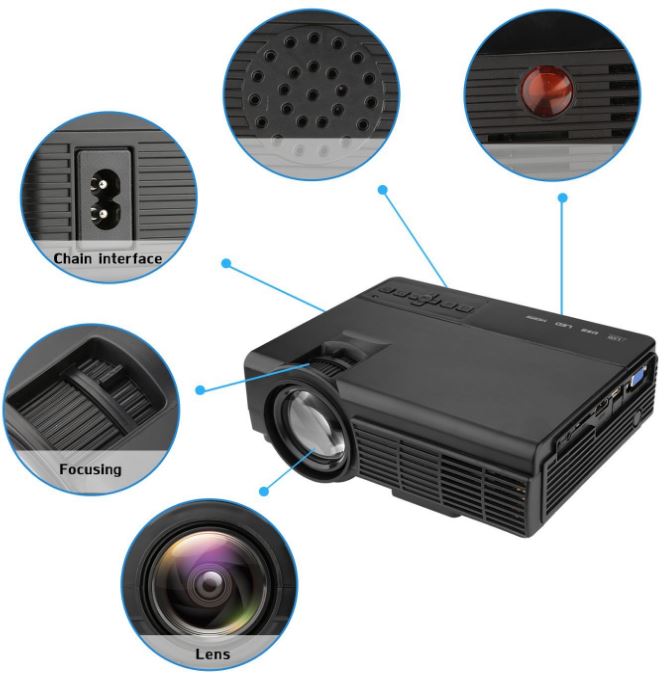 Where layout is concerned, there are a few different parts of the projector you’ll want to pay attention to. Just above the large lens is a focus ring. It’s got a little nub on the top that makes it easy to adjust, so it only takes a few moments to get the focus correct. On the back, you’ve got a number of handy controls. These allow you to navigate through the menus, select your input, and change picture settings. A remote is included, but it’s helpful to have the controls on the projector itself.

The inputs are all located on the right side. While this is an unconventional place to put them, we actually found that it was a little easier to wire in our video sources. For the most part, the rest of the projector is dedicated to cooling. This is very important to the longevity of the projector, so we’re happy to see cooling is well-integrated.

One of the most important features of this projector is the glass lens. Many affordable projectors are moving to plastic these days, and that severely degrades the image quality. With glass, you get a sharper, more well-defined image that doesn’t tend to fade on the edges. The light can pass through more easily, so there is less loss of brightness. 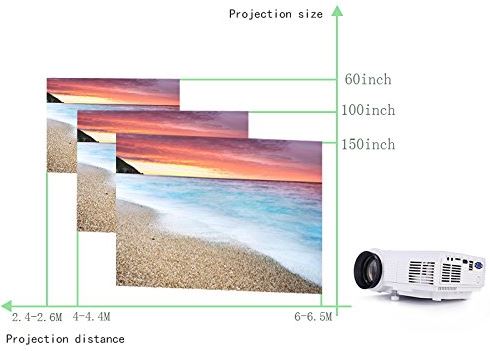 The lenses inside the projector have an adjustable throw ratio from 1.86 to 2.04. You can think of this like a zoom. At a ratio of 2.04, your display will measure 2.04 times the distance between the projector and your screen. Want a 100” screen? Easy. Just place the projector 50 inches from your screen.

Overall, the projector supports screen sizes between 30 to 100 inches. In our eyes, this is a pretty good range of display sizes. You can enjoy a small 30 inch screen if you’re out camping or letting the kids enjoy a film in their room, or you can go all out and enjoy a 100 inch screen on the wall of your entertainment center.

With 4K projectors priced at several thousand dollars, it’s hard to imagine how the image from a projector this cheap would look. Before trying it out, we didn’t have very high expectations. But once we fired it up, we were surprisingly impressed. The image was clean and sharp. Fine details were well defined. Colors were accurate.

Sure, there is a noticeable improvement moving to a high-end television. But the projector wasn’t just watchable, it was enjoyable. 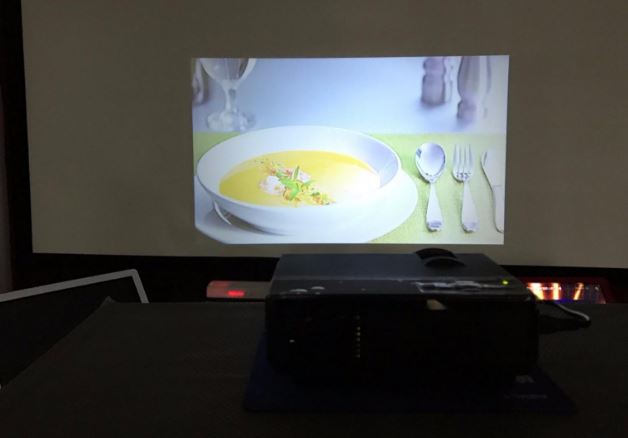 The specifications are exactly what you’d expect. A 1080p image is downscaled to 800×480, about twice the detail of standard definition and half that of high definition. The image, at only 2000 lumens, is bright enough with the lights off. But a little faded in full sunlight. On paper, you’re think that this projector would be significantly worse than a high-end model. But in reality, it looks great.

One thing is clear to us. You can’t always judge the quality of electronics by their specifications. Look at it this way. If you go to the store and purchase a brand-new Blu-Ray movie, you’ll be watching 1080p content at 40 mbps. Most YouTube videos are played back at 720p with 5 mbps bitrate. This means that the YouTube video has twice as many pixels, and 8 times as much data for each frame. Does the Blu-Ray look twice as good? If you played them side by side, you’d probably notice that the Blu-Ray looks a little better. But it’s definitely not twice as good, and it can be hard to believe that it requires 8 times as much data to produce a reasonably small improvement in image quality.

Likewise, a 1080p projector has twice as many vertical and horizontal pixels. 1080p would definitely look a little better, but we wouldn’t say that it looks twice as good. The Mlison Video Projector produces something that is enjoyable, whether you’re watching it by yourself or with the whole family.

There are three main video sources you can use with the Mlison Video Projector. As is to be expected, there is an HDMI port for most high definition sources. If you’re using a computer, there is also a VGA port. You’ll see one tiny 3.5mm plug (like the kind you use for your headphones) labelled “multi-input.” This is used with the included cable to hook up your composite source, and includes audio. For simplicity sake, there is also audio pass through. This means that you’ll plug the audio into your projector, then your speakers into the projector as well. It middlemans the audio, keeping it in sync with the video. 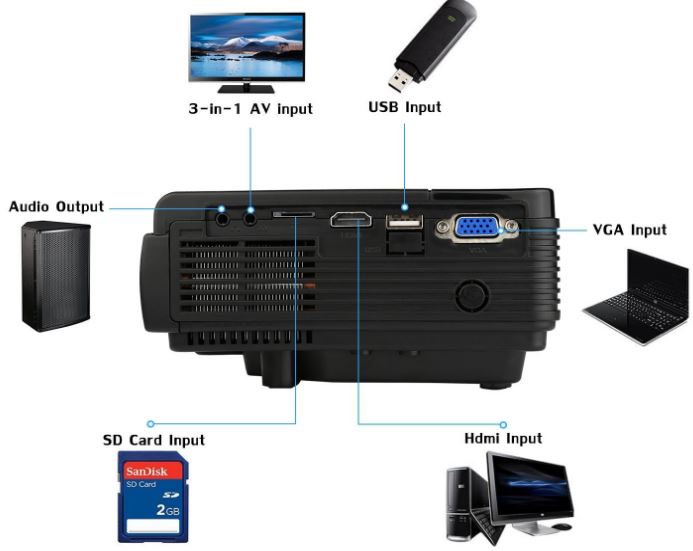 You’ll also find a USB port and an SD card port. Believe it or not, this projector can play some media files directly off of your storage device. It supports AVI and MPEG video files, as well as a range of images. This allows you to play back your films without the use of a computer, although some copy protection formats are not supported.

Our only gripe with the Mlison video projector is the brightness. Typically, it’s preferable for manufacturers to measure the brightness in ANSI lumens. ANSI is a measurement standard. When you have 2000 ANSI lumens, this means that there are 2000 lumens of light actually hitting the wall. With Mlison’s measurement, they mean to tell you that the bulb produces 2000 lumens of light. Then it has to go through the lenses, travel though the room, and hit the wall. At the end of this chain, you’re really only getting about 1000 lumens of brightness.

This looks fine in a dark room. It looks fine outside, as long as it’s night. It even looks alright if you’ve got a lamp on in the room. But if you’re looking for something you can use in a lighter environment, we’d recommend that you check out our review of the Ogima BL20 Video Projector. 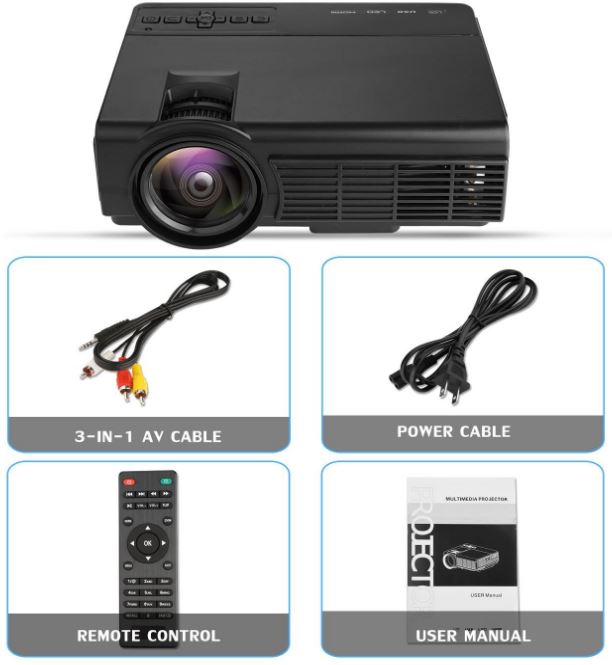 The Mlison Video Projector is the perfect example of how far technology has come. 10 years ago, a projector like this would have been considered top of the line. Today, it’s affordable enough that it could be considered a toy for your kids. Would we recommend buying it? For us, we think that it’s a great thing to have around. We can quickly and easily set up a second display wherever we want, whenever we want. When our 42” smart TV isn’t cutting it, we can throw our new 100” big screen image on a wall somewhere and get that movie theater experience.

Will this replace a high-end TV? Absolutely not. But is it a great supplement to our standard home theater systems that, frankly, can get a little boring after a while? Without a doubt.