When you’re choosing headphones in the $20-$30 range, it’s easy to accidentally end up with terrible audio equipment. The entry-level portion of the headphone market is incredibly saturated. As a result, it can actually be more important to investigate headphones in the $20 range than some equipment in the $60 range. But solving this problem is really as simple as knowing exactly what you’re getting from a pair of headphones.

It’s not features alone which make Mpow A4 Bluetooth Headphones special. It’s the features relative to its price. Almost every characteristic of this headset gives off the impression it should cost about twice as much as it does. And the A4 offers almost every ease of use feature you could want from a neckband headset. 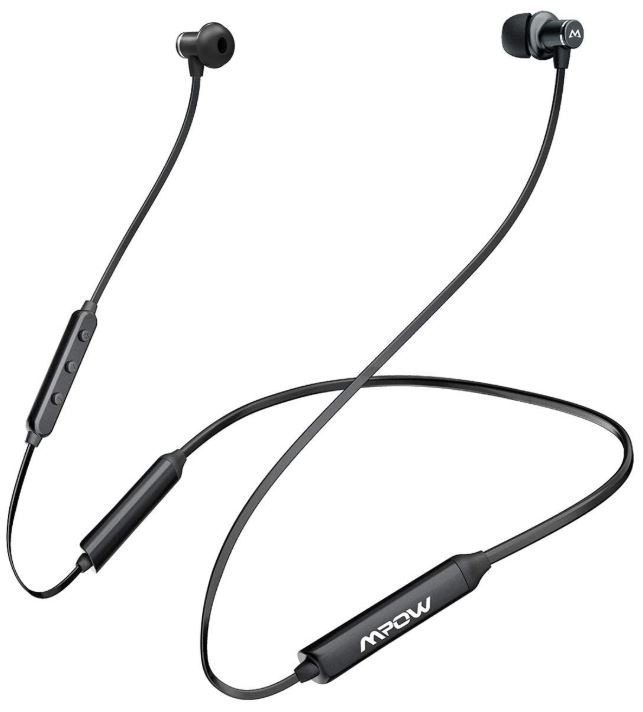 These days, in-ear headphones can do almost anything except your taxes. With a big enough budget, there’s at least a dozen fairly compelling features you can get from headphones. But when you’re looking around the $20 to $30 range, usually your best bet is to focus on the single feature that matters the most to you. What is that feature for the Mpow A4?

Weighing about an ounce, Mpow A4 Headphones are nothing if not lightweight. The buds themselves look quite generic, using a black exterior that’s been highlighted with a single silver band. The wiring has been flattened into a tangle-resistant design, which also protects its longevity.

On the backside of each earbud, you’ll notice a small magnetic component. This allows each of the A4 earbuds to clasp together while they’re not in use. You can then carry the Mpow A4 worn as a necklace, or store them with less risk of developing a tangle or knot in the wire.

The chassis of the A4 is constructed with an IPX5 waterproof design, intended to keep the buds safe from rain and sweat. That’s actually one of the lower waterproofing certifications. Though they might survive momentary submersion, you certainly don’t want to tempt fate by throwing them in a pool. 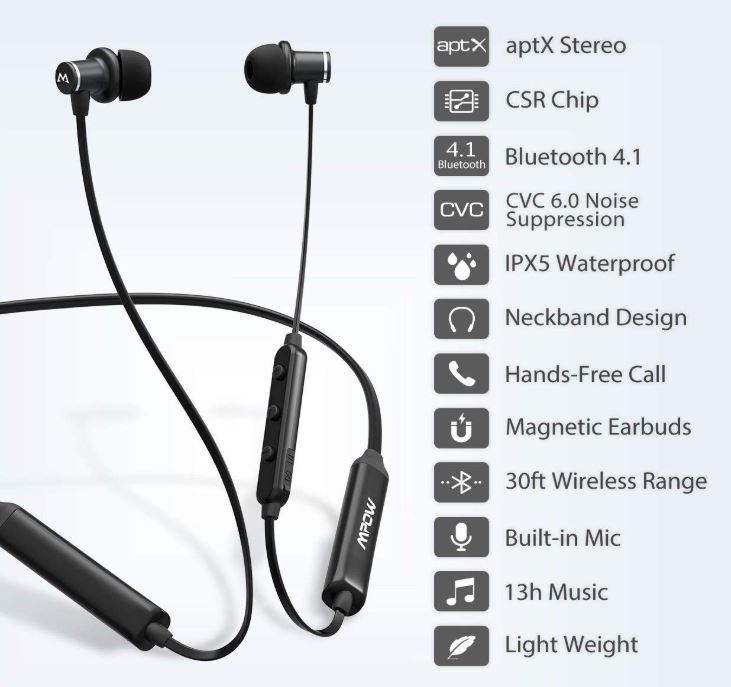 Totally wireless earbuds are often forced to place control buttons on an earbud. That can create any number of issues as you struggle to navigate a tiny control panel, especially if the device is positioned against the side of your head.

The Mpow A4 moved these controls onto an in-line console. The console has three multifunction buttons, which allow you to raise and lower volume, skip through tracks, and play/pause music. The volume buttons are separated by the central media button, making operation without looking very easy. Having only three buttons means multiple-button operation becomes necessary, but the added complexity is minimal. 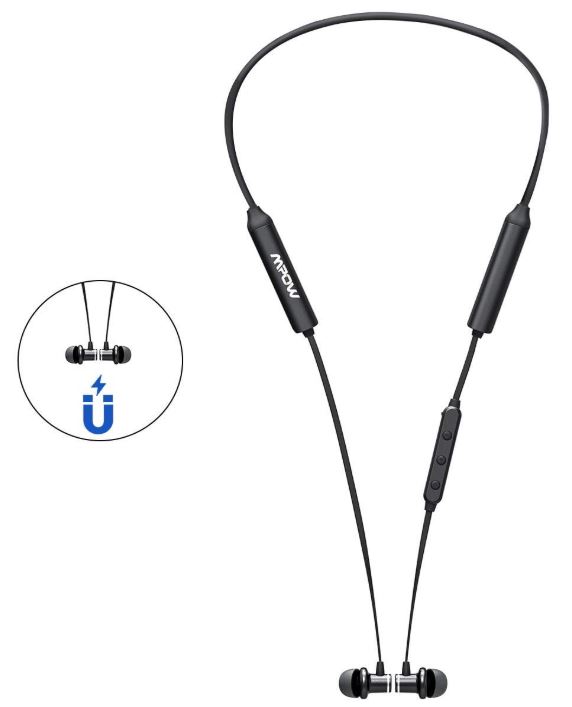 The base of the in-line console is also where you charge the built-in battery. Mpow A4 Bluetooth Headphones are built around a high-performance polymer lithium battery, offering about 13-hours of battery life. These battery estimates suppose that you’re making modest use of the volume. When you push the volume towards its limits, you’ll find the battery’s maximum lifespan creep towards 10-hours.

Between uses, the A4 supports 250-hours of standby time. That’s roughly ten days before you’ll need to think about recharging again. Getting a full charge takes about two hours. Though again, charge time will depend on several factors. In optimal circumstances, you should be able to get a charge in as little as 90 minutes.

The Mpow A4 are built around six millimeter neodymium drivers. The drivers are somewhat unremarkable. But the means by which the Mpow A4 squeezes-out sound quality has little to do with its hardware, and much more to do with software-side enhancements. Designed around a CSR 8645 chip use of the aptX codec, there’s a fairly high floor on audio quality.

It can be tough to make in-hear headphones sound great. Sound engineers know how to create nearly perfect speakers or headphones for any given environment. It just tends to be enormously expensive. Which is why a huge portion of research and design in the audio space goes into finding ways to make basic components sound amazing.

The brand to do this best is Bose. The underlying hardware used within their headphones and speakers tend to be enormously unremarkable. Instead, they generate higher levels of sound quality through software tricks and psychoacoustic design.

The Mpow A4 are essentially on the same development track. Though the A4 doesn’t have the same formidable software support as Bose, the Mpow A4 has nevertheless inherited a legacy of good ideas from other brands. They distinctly sound above-average for this price point.

Their soundscape is balanced, though like all headphones in this price range, it’s not greatly detailed. The treble range is somewhat muted, and bass capabilities are nothing if not average. Where the A4 shines is with its mid-tones, which helps contribute to call clarity. It also makes the A4 above-average for listening to podcasts, audiobooks, and other voice-based media. 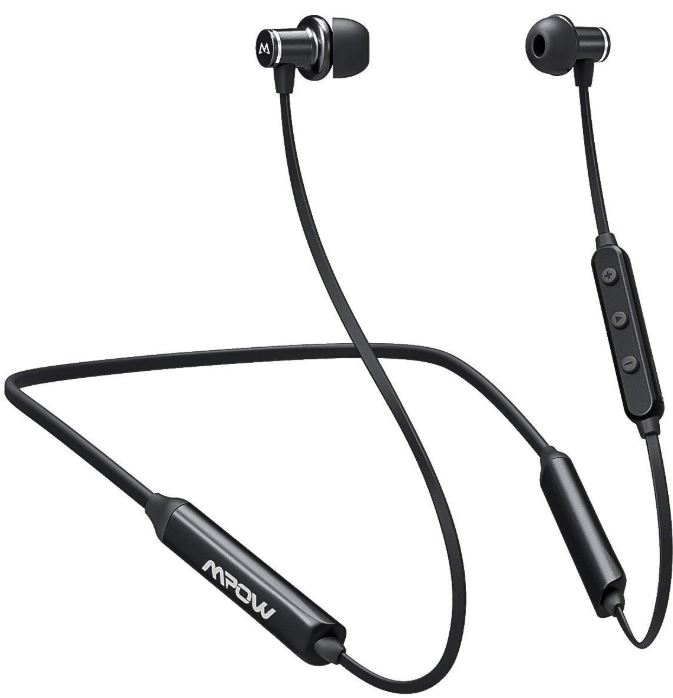 Athletic oriented headphones tend to provide little when it comes to microphones, especially when you’re getting gear well-outside of the $100 range. That can make life tough for people who prefer neckband headphones, but also want to take calls that don’t make your voice sound like you’re standing inside of a tin can. Luckily, there are always exceptions to these types of rules.

While most athletic neckband Bluetooth headphones only offer basic levels of call clarity, the Mpow A4 goes above and beyond. What really makes its microphone special is the built-in noise cancelling technology, CVC 6.0, which goes the extra mile to ensure call clarity.

It’s not quite business quality call clarity, and the clarity could be taken further by using a multiple microphone configuration. If you’re looking for truly sensational noise cancelling, then you want four electret microphones. Combined, multiple microphone setups are capable of sifting through noise far better than any single microphone could ever hope to achieve.

But for a single microphone setup, Mpow A4 Bluetooth Headphones are among the best you’ll find in this price range. Though most neckband earbuds aren’t particularly good for calling, the A4 are clear exception. It could easily be used as your primary method of taking and receiving calls during all hours of the day. 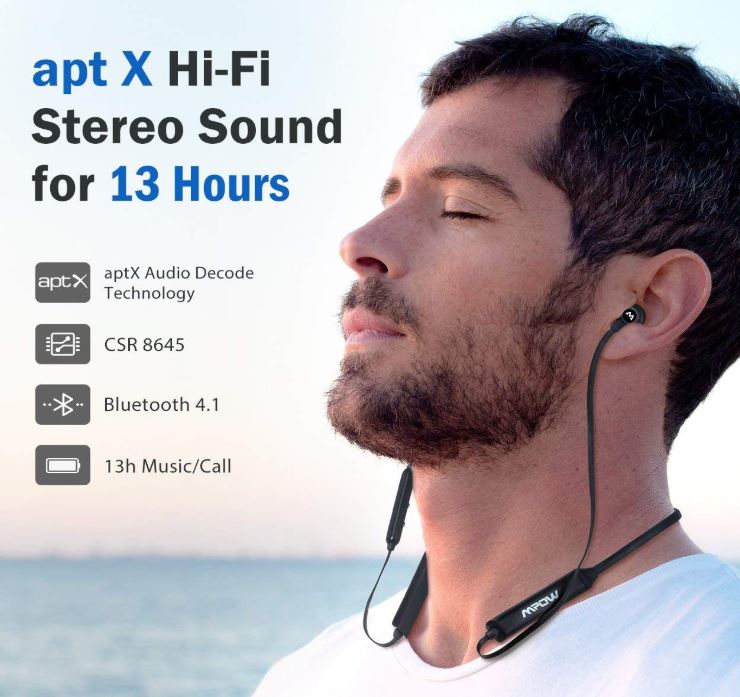 In-ear headphones are generally built with ear-tips made to comfortably fit the average person. But not everyone has exactly the same sized ear, which is where ear-tip size options become important. The Mpow A4 Bluetooth Headphones can offer up to three sizes of ear tips. The A4 also includes two full sets of replacement ear-tips for future use, but we’ll look at those later.

Being able to select between three sizes allows for considerable comfort potential. Of course, there’s almost always room for improvement. Some high end headphones often provide as many as seven sizing options, though three is about the standard for many great midrange headphones.

In athletic circumstances, getting an even more precise fitting ear-tip has less to do with comfort, and more to do with ensuring the ear-bud stays in your ear even while you’re in motion. Mpow A4 Bluetooth Headphones are made for light motion. You can easily take them jogging, hiking, or to the gym. And once you’ve selected the right size ear tip, they’ll stay secure through almost any kind of regular motion. 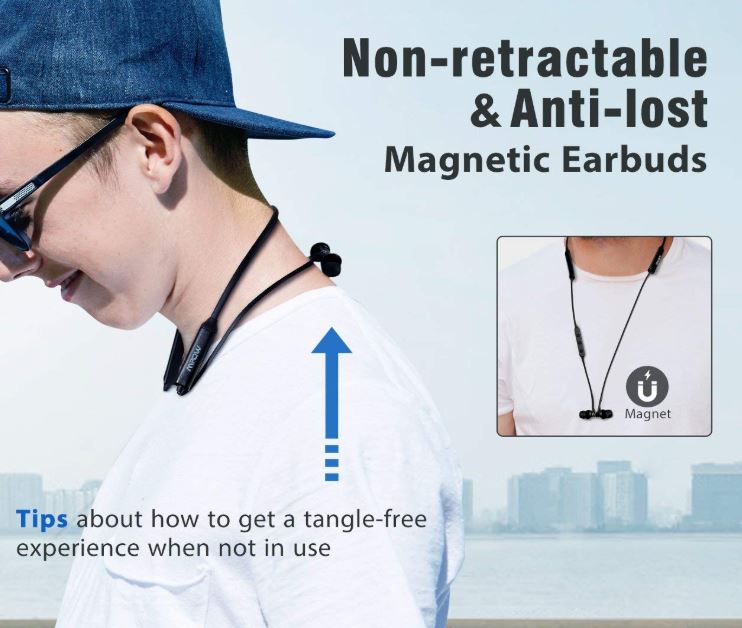 The Mpow A4 makes use of a Bluetooth 4.1 connection, which comes with plenty of advantages. The most prominent of them is quick pairing with your devices. It takes about three seconds to pair up with a smartphone, tablet, television, speaker system, and so forth. Unfortunately, the 33-foot connection distance isn’t going to amaze you. But given the athletic orientation of these headphones, it’s still probably about 30-feet more than most people will need.

The Mpow A4 doesn’t include much in the way of extras, which is probably a good thing. It means most of the value of the headset is soaked up in the headset itself, instead of a carrying case or similar accessories. Nevertheless, the A4 does include the basics: a quick start guide, a USB charging cable, and two replacement sets of ear-tips.

The average lifespan for a pair of earbuds in this price range is terrible. Many are fortunate to last beyond six months. But there are many things which help bolster longevity for the Mpow A4 Bluetooth Headphones. Its use of flattened anti-tangle wiring doesn’t just make using the headphones simpler, it actually helps protect the wiring itself from strain.

If you treat the A4 with respect, it’s easy to see them as capable of lasting three years. After three years of regular use, you would want to replace them because lithium-ion batteries do not age well. Most people in most circumstances will probably see closer to 18-months of use.

Perhaps it’s not totally unrelated that the Mpow A4 Bluetooth Headphones include an 18-month warranty. They also include a 45-day money-back guarantee, which is a nice guarantee in the somewhat unlikely event you can’t find a comfortable fit with the ear tips. 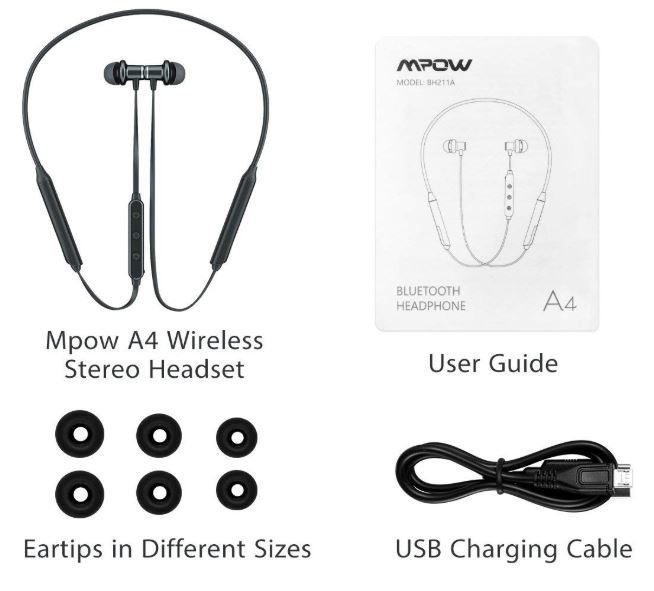 Who Should Choose Mpow A4 Bluetooth Headphones?

People love the A4 because it offers bang for your buck. Their battery life compares favorably to equipment with ten times the cost. Even relative to other Mpow headsets, the A4 has greater battery life than both the A3 and A5. It’s also only of the bunch to offer support for aptX.

Ultimately, the quality of their construction is about average, which is completely reflected in their price. Assuming you don’t abuse them, these headphones ought to last long enough to provide considerable value. If you were enormously kind to them, and didn’t hammer them with use on a regular basis, it’s not implausible they could see use in five years.

They’re a reliable choice for professionals on the go, athletes, and sound great with basically any common type of media. And that makes the Mpow A4 Bluetooth headphones a good choice for just about anyone who’s trying to squeeze value out of some relatively inexpensive headphones.