People seeking true wireless earbuds are walking a tightrope. You don’t want to choose cheap crap because you’ll run into sync issues between the buds. You don’t want to go overboard with features you don’t need because you can easily increase the price of earbuds without increasing performance.

Striking the right balance often means finding something in the middle. Headphones with great performance per dollar, for example. Though identifying the right gear does generally depend on understanding the ways you plan on listening to your headphones.

With the T5, Mpow was aiming for the middle. In that regard, the T5 could be called a bulls-eye. True wireless earbuds like these are favored by people who cannot be bothered to deal with tangling wires and cables, and for good reason. But making them work as well as wired earbuds isn’t simple. 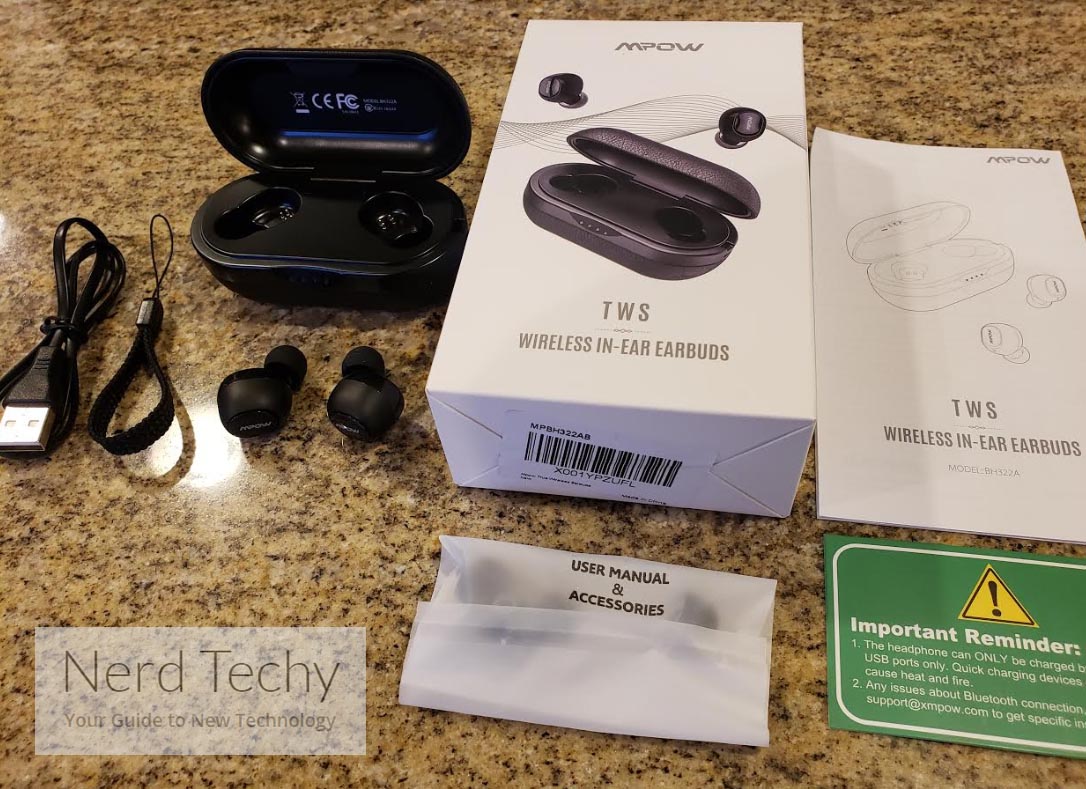 It’s worth keeping in mind, there’s really no such thing as a perfect pair of earbuds. Every type of headphones is made for a rather specific listener, or is intended to be used in somewhat specific circumstances. The Mpow T5 are not an exception to this general rule.

It’s initially hard to identify the way in which the T5 is specialized. They’re capable of taking on sporting activities, indoor and outdoor. But they’re not exactly sports headphones. Instead, they’re more like general purpose headphones for people who are mostly doing stationary listening while on the go. In other words, people who are headed to work, taking public transportation, and so on. 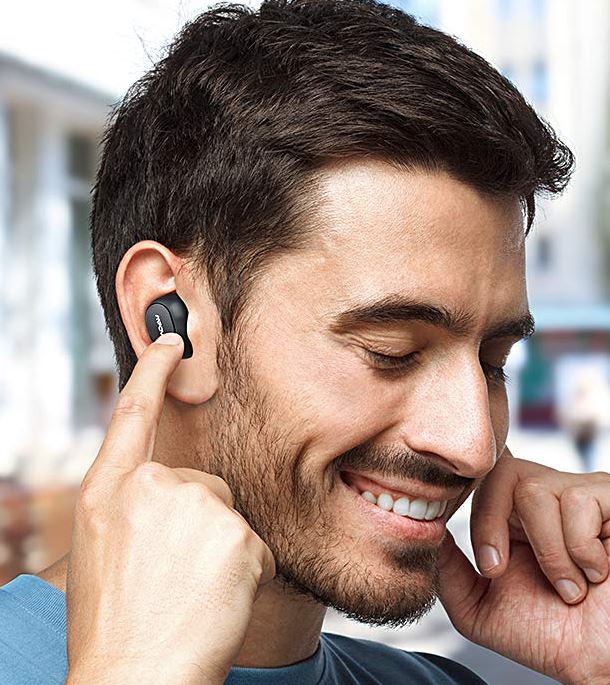 Compared to similar true wireless earbuds, the T5 are marginally more compact. But they’re close enough to average that most people will not notice the difference. The outside of each earbud is highlighted with the Mpow logo and a simple red circle. Though these earbuds are not exactly distinctive looking, neither are they ugly or unappealing. They just look a bit generic. 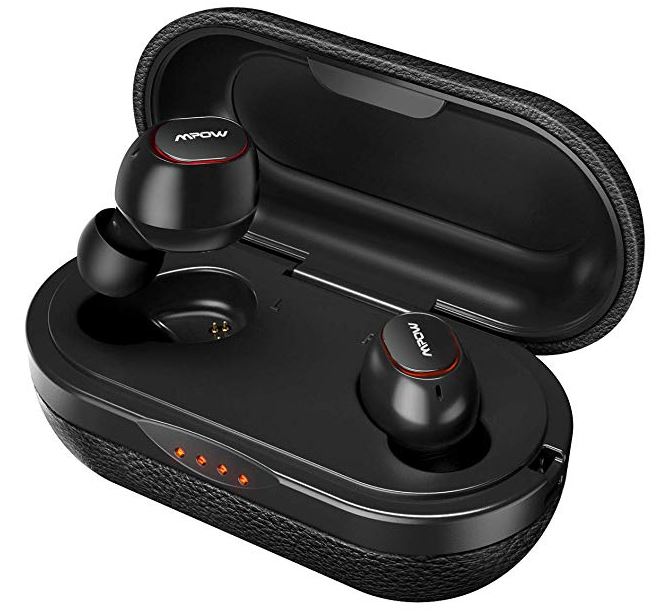 The outside of each earbud acts as a large button. These buttons allow for touch control. You do have to memorize the patterns of button-pressing necessary to bring up the commands you want. But because you’re dealing with two buttons on two earbuds, it’s a pretty simple process.

The T5 are constructed with an IPX7 waterproof certification. That makes them ideal for rain, sweat, and splashes. They’re equally well protected with it comes to dust, sand, and similar bits of debris. The IPX7 certification is actually one of the higher waterproofing certifications, and it indicates you can submerge these earbuds under a couple of feet of water. Though you would probably want to use something a bit more secure for white water rafting, like ear-hook earbuds.

Unlike many other Mpow headphones, this waterproofing is achieved by creating a tight seal between essential components. Many other Mpow athletic headphones use a hydrophobic coating instead of a proper seal, which is really terribly thin protection against any real amount of moisture. But even with a respectable IPX7 rating, you really don’t want to go testing the limits of your protections on purpose. 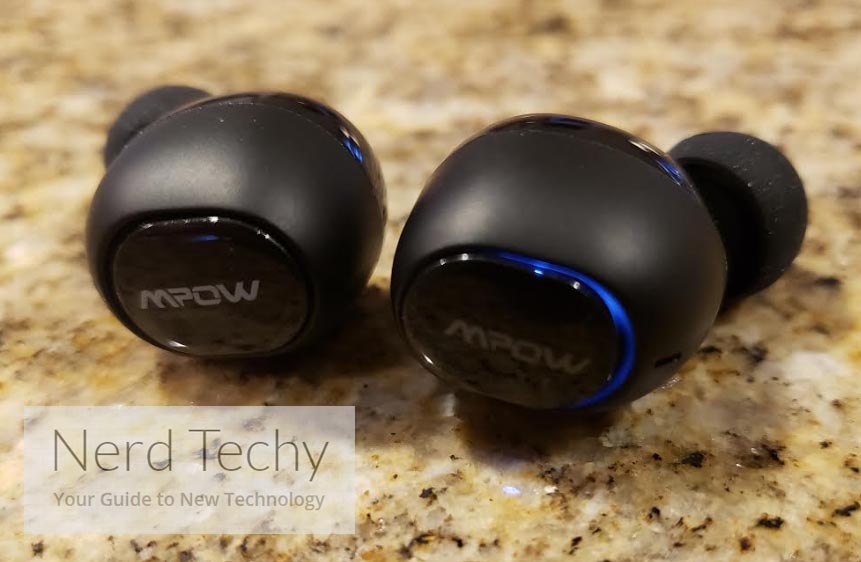 The charging case measures roughly 6 x 3.3 x 1.6-inches, and is wrapped in faux leather. The leather isn’t going to pass as authentic, but it’s perfectly soft and smooth against the skin. Plus, it’s going to aesthetically hold up far better than bare plastic ever would. Because faux leather like this isn’t only nice to touch, it has many of the same properties as actual leather.

There is a problem when it comes to comfort. The Mpow T5 provides medium and small ear tips, a total of two pairs. For roughly 90% of all people, these ear tips ought to provide a perfect fit. But that means about one in ten people will end up unable to a perfect fit. 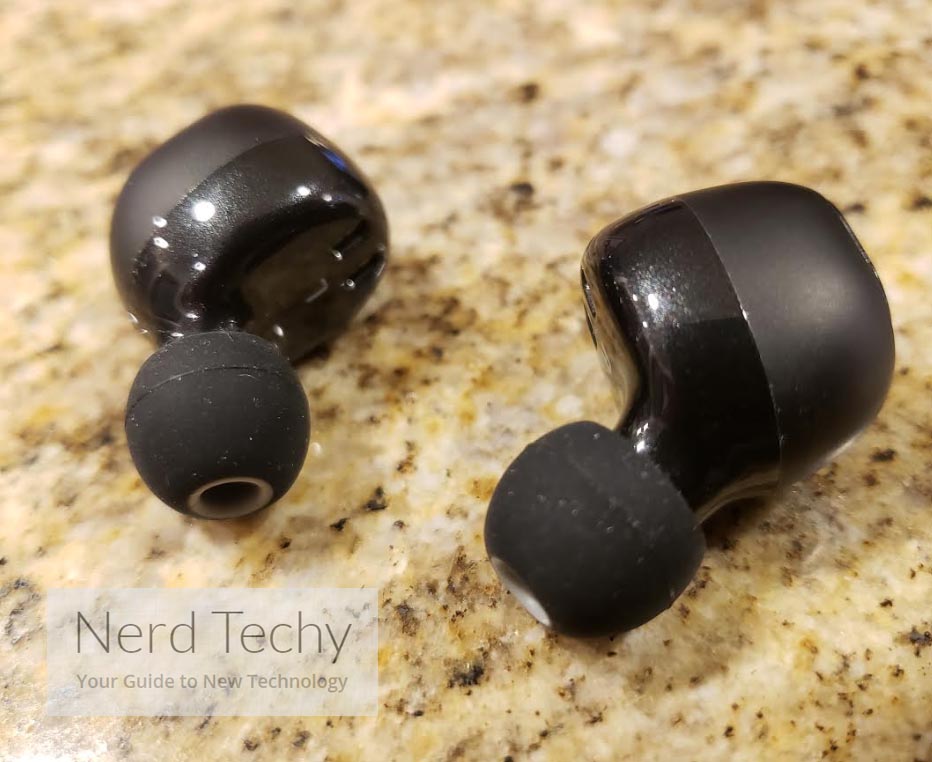 If you’ve had to use larger ear-tips in the past, it’s likely that you won’t find a great fit with the Mpow T5. It may be worth noticing that the majority of all similar earbuds provide three silicone ear-tip sizes. It’s actually kind of confusing why Mpow would only provide two instead of three.

However, for the 90% of people who will be happy with the T5, the included ear tips are quite comfortable. The T5’s silicone ear-tips were specially designed to avoid the pain associated with lengthy listening sessions while using earbuds, which makes them uniquely suited for people who want to use their earbuds for longer than a couple of hours.

The T5 use Bluetooth 5.0, and consequently can provide all the features and special support that come with it. That includes support for the APTX and AAC codec, to keep your sound crystal clear, even if you plan on using HD audio. Once you pull them out of their charging case, the T5 will automatically pair with each other. Of course, you do have to undergo a short setup the first time you use these earbuds. 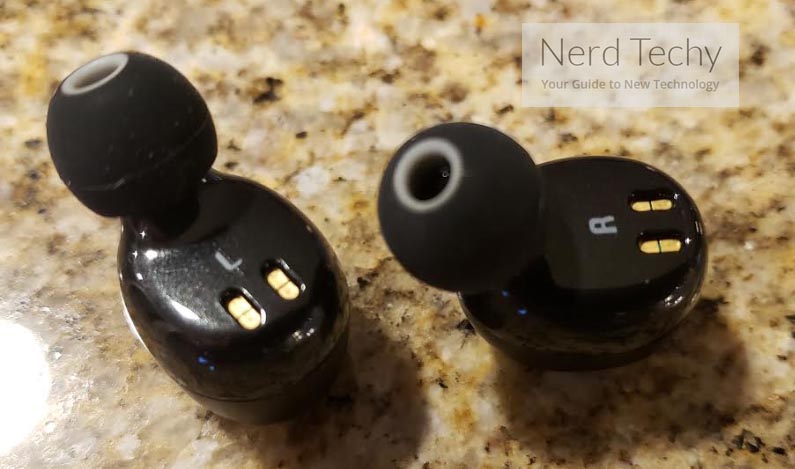 Because the T5 support Bluetooth 5, you can expect full support for all your wireless devices. That might include laptops, smartphones, tablets, and so forth. The only weak point in their connectivity is distance. The Mpow T5 only provide about 30-feet worth of connectivity. That’s low-average for earbuds in this price range.

Humans hear sounds slightly differently from each other. We all have a slightly different hearing capabilities, which continue to change throughout our lives. On top of that, we’re all listening to different types of music! Some types of music are improved with greater clarity in particular tones, so when you’re trying out the Mpow T5 for the first time, it can be tough to think about them objectively. 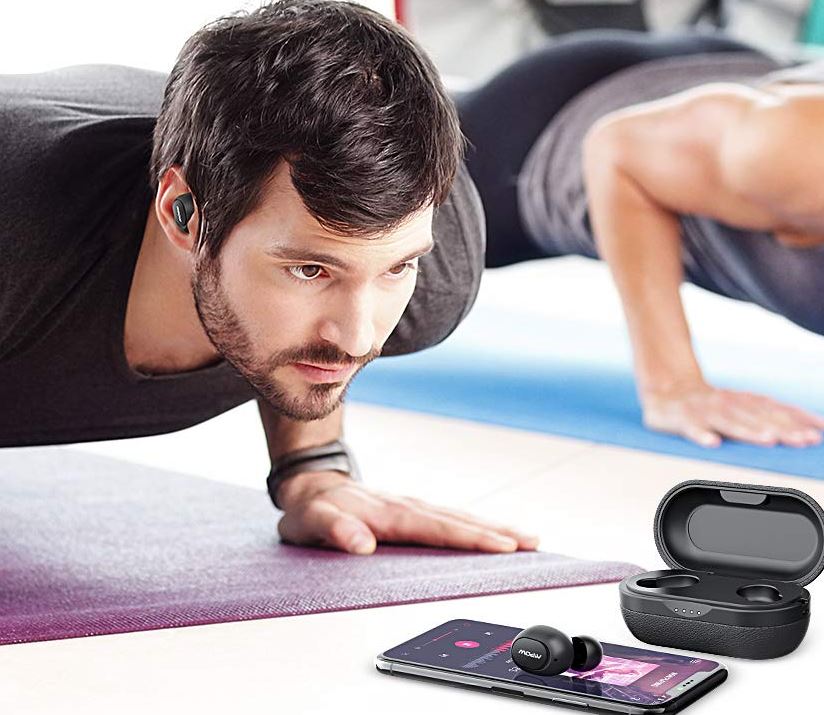 It’s clear their bass has been boosted slightly, helping to give these earbuds a greater audio presence, almost as if these were attempting to be athletic earbuds. The T5 has an equally great emphasis on mid-tones, intended to make these buds suitable for podcasts, audiobooks, and taking calls.

But the richer bass and improved mid-range is not matched by improvements in the higher treble range. This creates a situation where, by contrast, some of the treble tones can feel underwhelming. That’s not an easy problem to solve without greatly exceeding the $100 price-point, though you can often do a good job alleviating this problem with an equalizer. 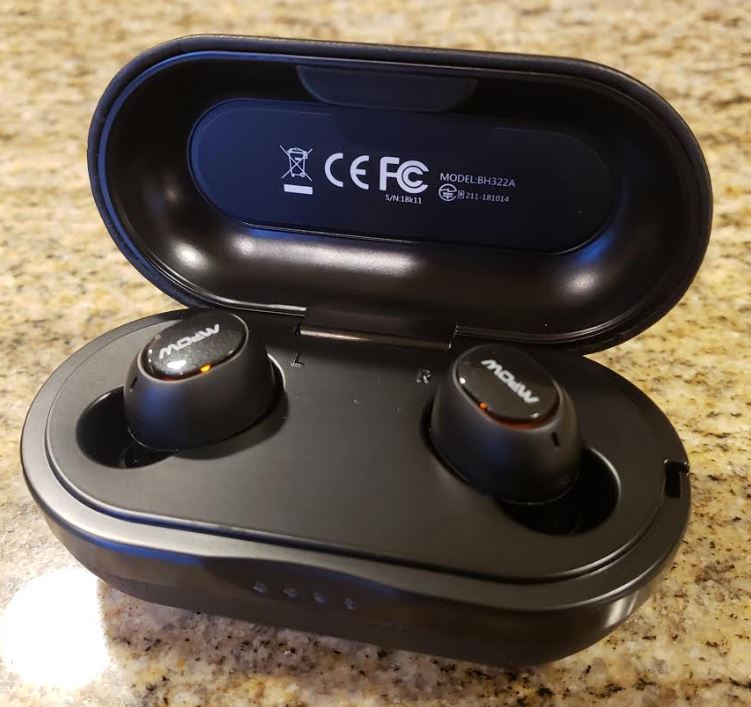 The battery inside each earbud is actually fairly small. It’s a tiny 50mAh lithium-ion cell. But in spite of its relatively small size, these batteries allow the Mpow T5 to support seven hours of playtime before needing support. The capacity of the charging case is a bit larger, sitting at 280mAh.

As a result, the charging case can be used to recharge the T5 half a dozen times, stretching out total playtime to about 42 hours. That’s very nearly two full days, which is deeply impressed when compared to virtually any other pair of similar buds.

Unfortunately, the standby time for each bud is about 92 hours, which is just short of four days. The right bud actually has a slightly longer standby time, but if you want to use both buds, 92-hours will be your limitation. 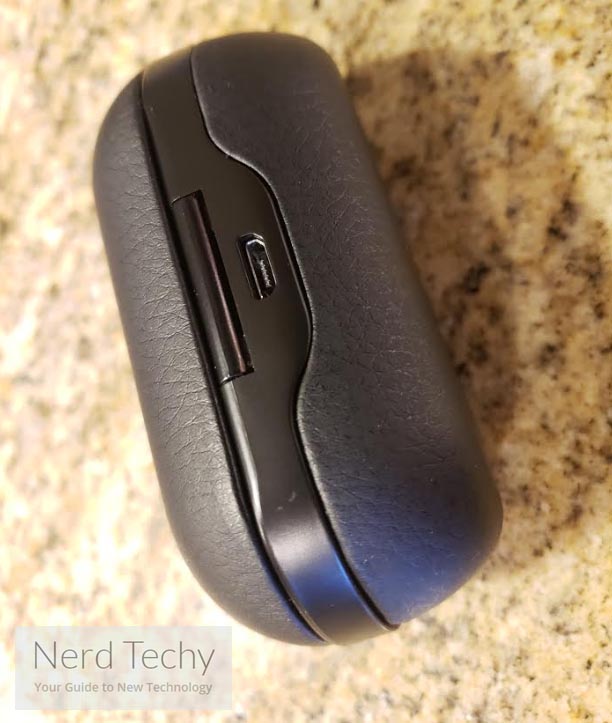 Like almost any pair of Bluetooth headphones, the Mpow T5 are constructed with a built-in microphone. It’s actually better than a standard issue Bluetooth mic because it makes use of CVC 8.0 technology. The general idea behind this tech is to create noise isolation through artificially reducing the noise in your signal.

The end result sounds as if your voice is layered over a stream of steady ambient noise, which can scrub about 30dB from your signal. If you’re working on the floor of a stock exchange, that’s probably not going to cut it for noise isolation. But as long as you’re not literally surrounded by screaming adults, the CVC 8.0 can serve as an excellent layer of protection between yourself and noise.

Of course, CVC 8.0 doesn’t mean this headset is perfectly equipped for calls. If you were looking for a business-quality call experience, you’d need to choose a headset made specifically for calling. The Mpow T5 is not that type of headset. 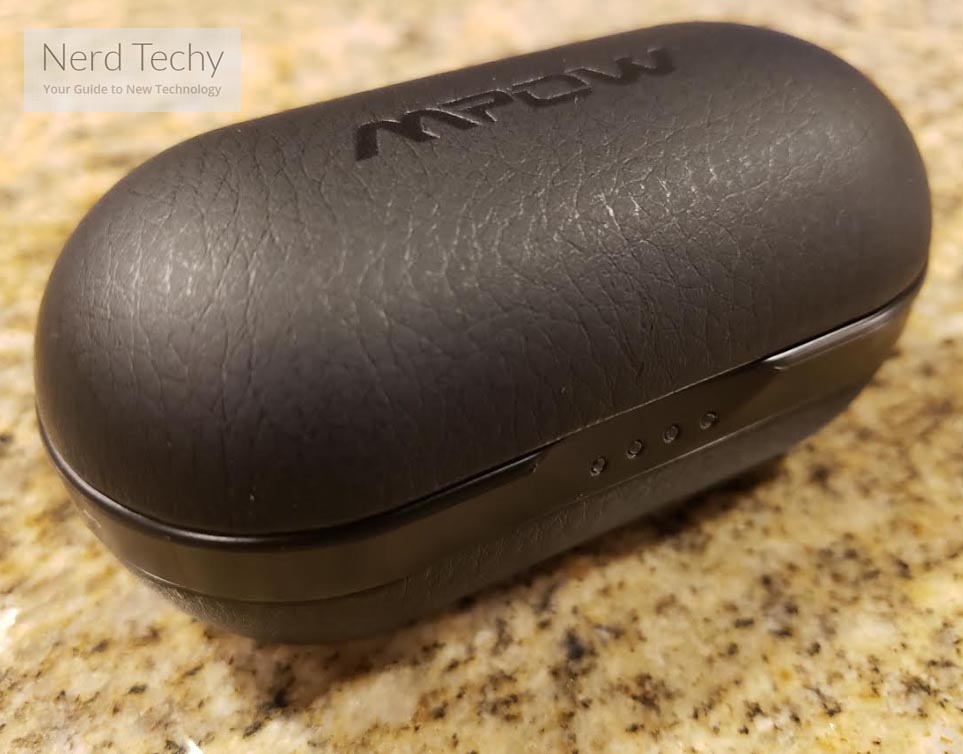 Creating in-ear headphones can be an uphill battle. That’s certainly the case for creating true wireless earbuds like the Mpow T5. After all, the T5 don’t only need to connect with your Bluetooth devices, they need to connect with each-other as well. For every advantage of going cordless, there’s a disadvantage as well.

But the T5 manages to work around these challenges pretty well. For example, both the right and left earbuds are capable of working independently from each other. That makes the T5 great for using in mono mode, and effectively doubling their theoretical battery capacity.

In addition to the earbuds, and their slightly fancy charging case, the T5 includes a micro USB charging cable and a user guide. Mpow also includes a one-year warranty. 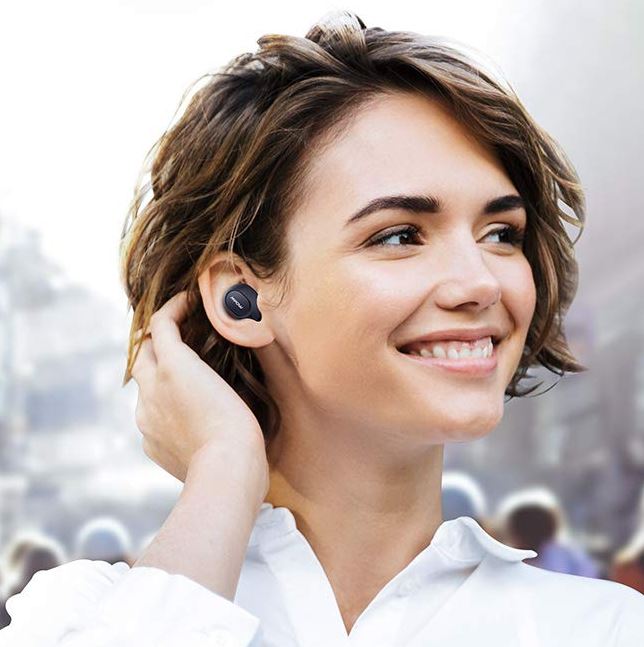 Who Should Choose the Mpow T5 True Wireless Earbuds?

When you’re using totally wireless equipment like the Mpow T5, you can anticipate your equipment to last until the batteries are no longer useful. For a frequent user, that ought to be roughly 3-years of heavy use. But given their expansive starting point, even at the 3-year mark, these batteries may be able to deliver passable performance.

At this price point, Mpow T5 True Wireless Earbuds are certainly value-oriented. Most of what you’re paying for is their incredibly powerful battery, which is meant to last through more than a full day. The microphone is also reflective of their price. It’s better than average, but certainly not the best.

Though the T5 aren’t for everyone, they stand on their own merits. Their audio quality is respectable, and their battery life is fantastic. The only room for serious complaint involves comfort, and only for people who are most comfortable with large-sized ear-tips. Which makes the Mpow T5 a pretty good selection for most people who are looking for trying to stay connected to sound without being wired to it.