Thrustmaster does lots of different collaboration projects. They’ve done work with the Air Force, with gaming companies, and with auto makers. Because the Thrustmaster brand is largely about authenticity, and that often involves officially licensing their products.

Immersion and authenticity is all about details. It’s not simply having a stick or handbrake, it’s how those components feel in your hand, and even the physical feedback as you use the instruments. Thrustmaster doesn’t just want to make cool racing mods, they want to make mods that help you feel like you’re actually behind the wheel.

The TSS Handbrake Sparco Mod was officially licensed by Sparco. If you’re not acquainted with that brand, they’re one of the top motorsport manufacturers globally. The TSS shifter/handbrake mod is an amalgamation of several officially licensed hardware, and the kind of software support you can only find from mod specialists like Thrustmaster. 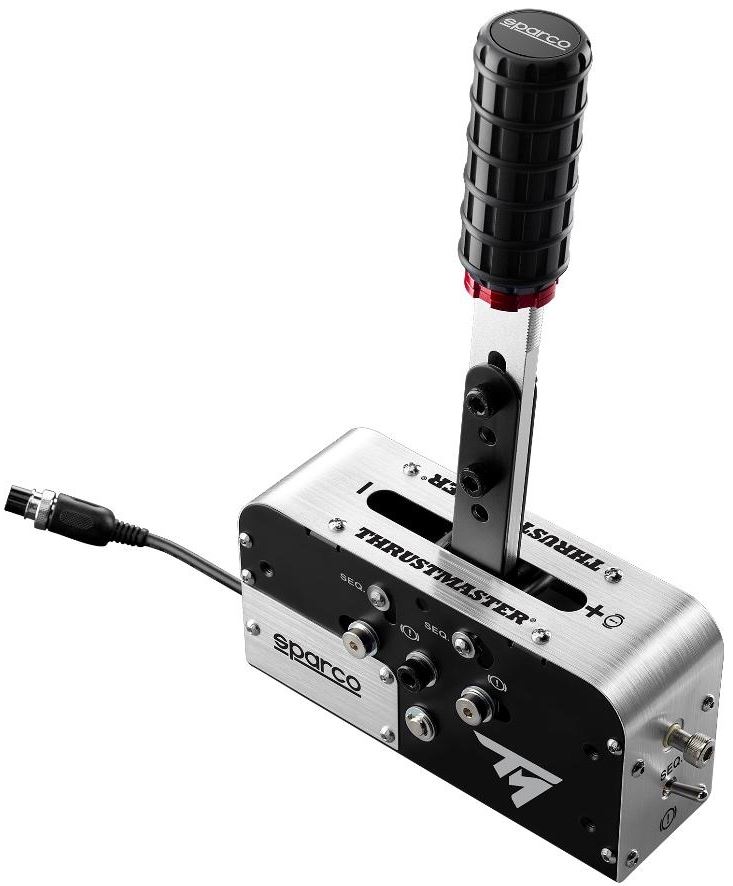 Though its name gives this away, the TSS Handbrake Sparco Mod offers two modes of use. The first mode is the handbrake, and the second mode is sequential shifter. The handbrake’s adjustable design can be used horizontally in GT mode or vertically in rally mode, all with the flip of a switch.

The two-in-one nature of this shifter allows you to alternate the shifter to the handbrake position, and then rapidly swap back again. That makes this shifter fully adaptable not only for different playstyles, but also for people who may be ambidextrous, right, or left handed. 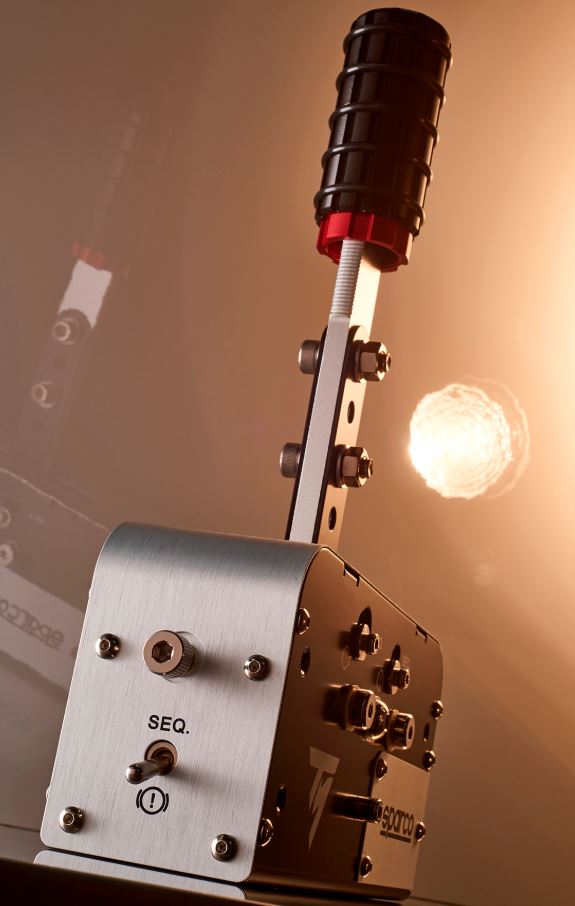 If you know much about racing, you’ll probably notice the gear knob is a perfect 1:1 scale replica of the kind of Sparco equipment you’d see inside actual automotive equipment. Consequently, the knob stands 3.4” tall, exactly like the real thing.

The body of this device is almost entirely made from steel and aluminum. A small portion of the handgrip is composed of rubbery plastic material instead of metal, which was done in the interests of comfort and authenticity. Sometimes authentic grips aren’t necessarily the most comfortable option, but there’s no serious room for complaint with the grip. 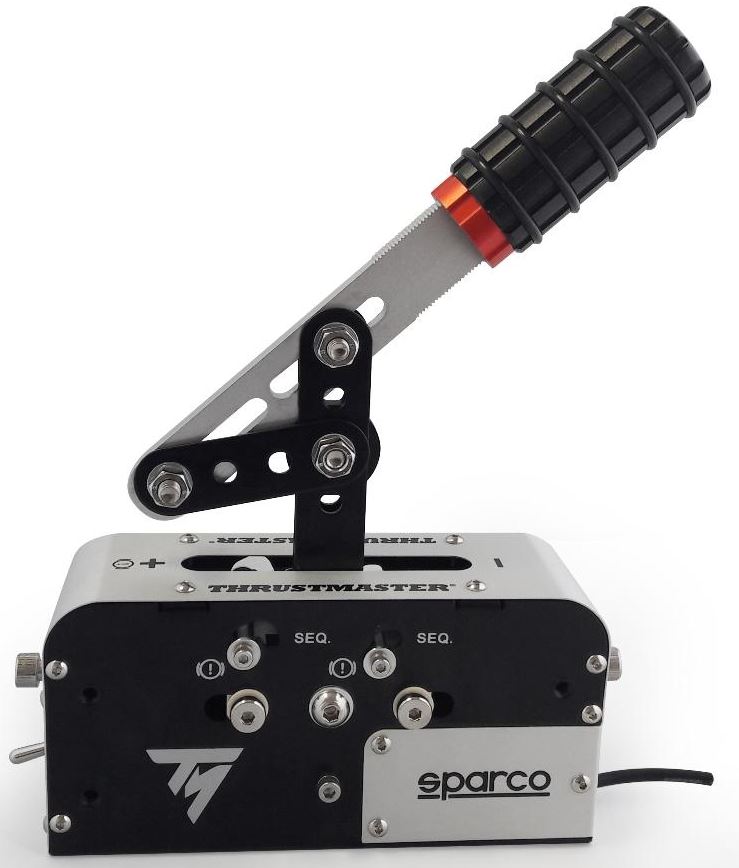 Because all the components involved with this device are fairly high grade, right down to the steel brushings and industrial-class flat coil springs. Springs which offer nearly 9lbs of resistance, depending on how you’ve adjusted the shifter. In addition to using excellent physical materials, the TSS Sequential Shifter was constructed in Germany. That’s certainly not bad news when it comes to automotive part manufacturing.

The reason why many brands make cheap plastic shifter/handbrake units is because they can be cheaply constructed. Because Thrustmaster is trying to replicate mechanical parts, they use mechanical parts in their designs. But authenticity has one distinct downside, and that’s cost. Getting what you pay for is a good thing. However, you’re getting a lot with the Thrustmaster TSS Sequential Shifter.

Longevity of the Equipment

Apart from the more authentic immersion that only mechanical equipment can provide, sturdy gear like this tends to have more lasting power. Any quality set of game accessories ought to be able to provide several years of playtime, but the TSS Sequential Shifter/Handbrake was made to last virtually forever. 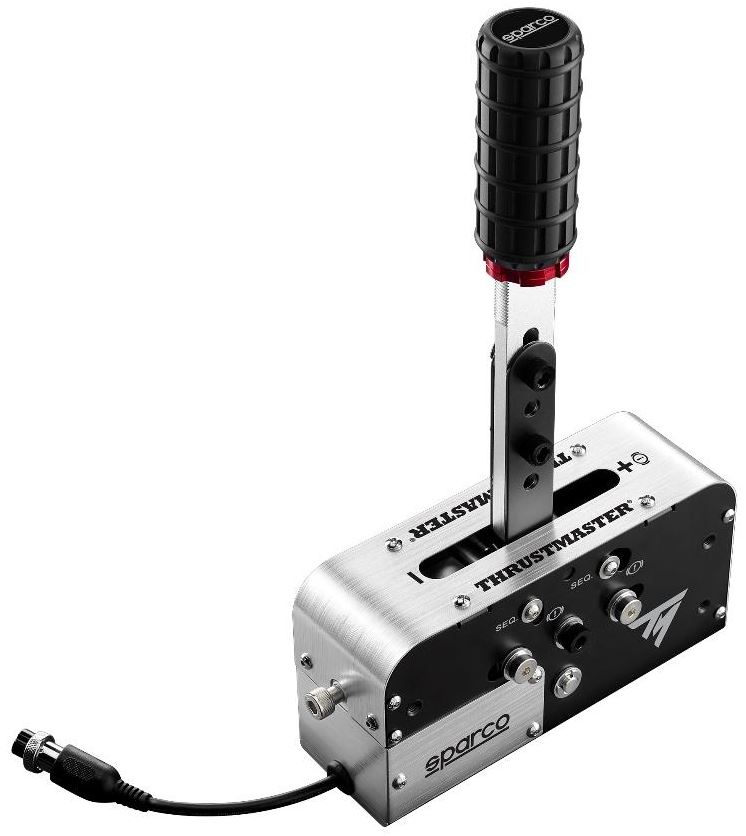 For example, you’ll find the precision of this shifter does not decrease over time thanks to the use of a magnetic sensor. There’s no physical contact between components that will cause precision to decay or need readjustment.

After about 100 years, the magnet will might lose about 5% of its strength, but that certainly shouldn’t cause you any immediate concerns. In addition to that magnetic sensor, Thrustmaster designed this unit so that there’s no tactile contact on the potentiometer, which ensures that you’ll be able to expect a virtually unlimited lifespan from this gear.

But to be totally realistic, this is mechanical equipment. There will always be a little wear and tear somewhere, but the fact it’s not going to affect critical systems is great. You may still experience wear and tear surrounding the handle in particular, but if it became a problem in the distant future, that would be quite easy to replace or tape-up.

One of the features that has become an almost defining part of the Thrustmaster brand is H.E.A.R.T technology. It can actually do a wide range of different stuff, but it’s really about allowing you detailed customization over your shifter/handbrake. It can be especially useful if you’re playing on the PC instead of the Xbox One, where you can take full advantage of those kind of deep customization abilities.

It’s possible to find mechanical alternatives to the Thrustmaster TSS Sequential Shifter & Handbrake. But there are advantages to going with bigger, established, specialized brands like Thrustmaster. Their H.E.A.R.T technology alone is an exceptional feature for anyone who will end up using their equipment on the PC platform.

Thrustmaster knows their core audience tends to be hardcore enthusiasts, people who really value small details. Consequently, they’ve designed this shifter with an attachment system for mounts and cockpits. That system is composed of a handful of well-positioned M6 screw threads, so mounting the handbrake would be quite simple. At least, simple for anyone who’s gone through all the trouble of setting up a cockpit to begin with.

The almost nine-pound weight of this device means it doesn’t exactly slide around the table. But depending on how exciting your play becomes, and depending on the height of the shifter relative to yourself, you may find a clamp would be useful for keeping it stationary. After all, even though the capacity is there, most people probably won’t be drilling the TSS shifter to a driver’s seat.

The TSS Handbrake is compatible with the entire Windows ecosystem. That includes Windows operating systems and Xbox gaming consoles. Though you can’t use the TSS Handbrake on operating systems older than Windows 7, and consoles older than the Xbox 360. But as long as you’re not trying to connect this equipment to decade-old software, you shouldn’t encounter any compatibility issues. 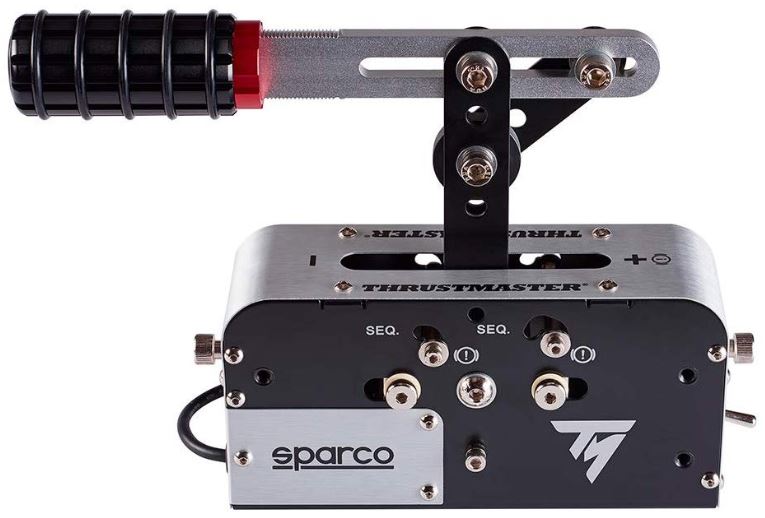 The Thrustmaster TSS Sequential Shifter & Handbrake Sparco enjoys compatibility with most of Thrustmaster’s own racing wheels. That includes the TX Series, TS500 RS, TS-PC Racer, T150, TMX, T-GT, T300 Series, and TS-XW RACER. It also has compatibility with basically any racing wheel of any brand. Though there are always some rare exceptions for people who have extremely old or extremely obscure equipment.

Thrustmaster maintains a list of console games that are compatible with this shifter, and with all their equipment, on their website. But to spare you some time, this shifter supports basically every title that wasn’t made specifically for proprietary equipment. Whether you know it or not, Thrustmaster is a titan in this particular gaming niche, so their mods are as widely accepted as any third party accessories have ever been.

But it’s actually still a good idea to browse through their list of compatible games. At least, if you’re interested in finding some new driving games to play. Because it’s basically a list of every game a driving enthusiast would want to play. Though the TSS Sequential Shifter & Handbrake could be put to uses beyond racing games and driving sims most of the titles that would allow that are on the PC platform. 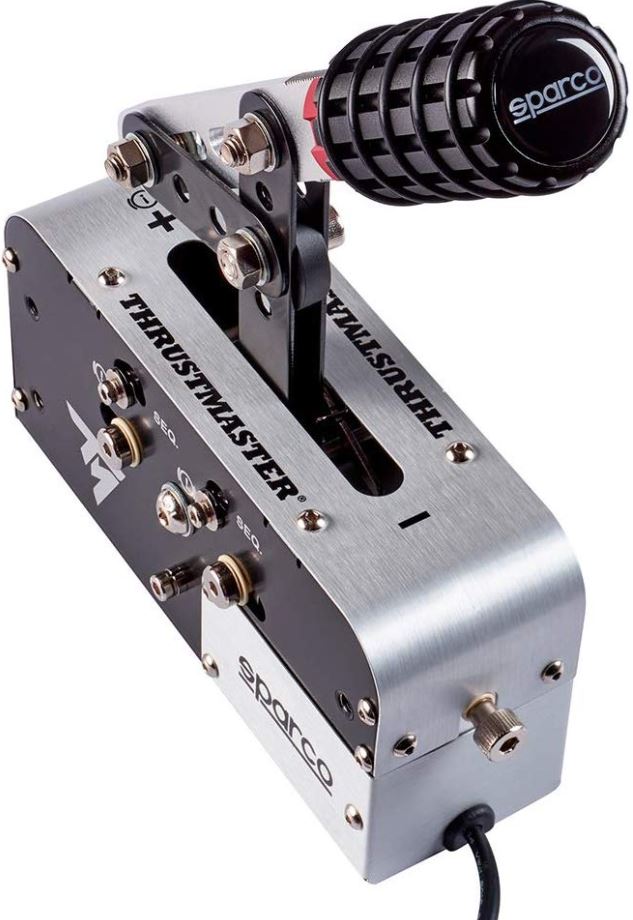 Thrustmaster separately sells some pretty useful clamps that can hold the shifter down against a table or desk. Their clamps aren’t particularly special, except they’ve been made specifically for these types of products, so they’re sized perfectly for holding a shifter and staying out of your way.

Though clamps aren’t included, the TSS Sequential Shifter & Handbrake Sparco Mod does include a detachable gear knob and handbrake level, a mini Allen key and an Allen key, a key wrench, a detachable DIN/USB cable, and a two-year warranty. Basically, it comes with everything you need to make basic adjustments to the shifter/handbrake.

Some people aren’t great working on machines, even simple machines. The TSS Sequential Shifter & Handbrake isn’t tremendously complicated, and if you follow the included instructions, you won’t encounter any problems trying to make adjustments to the mod. But nevertheless, this is a machine, and that means some people are going to have trouble and need support.

It should be noted, Thrustmaster has fairly respectable technical support. Their support site has an excellent search function that lets you get feedback from both staff and other users. If you encounter some kind of issue, you’ll probably be able to dig up a solution without having to ever interact with staff. Many of the posts even have pictures in addition to descriptions, so it’s easy to find helpful content. 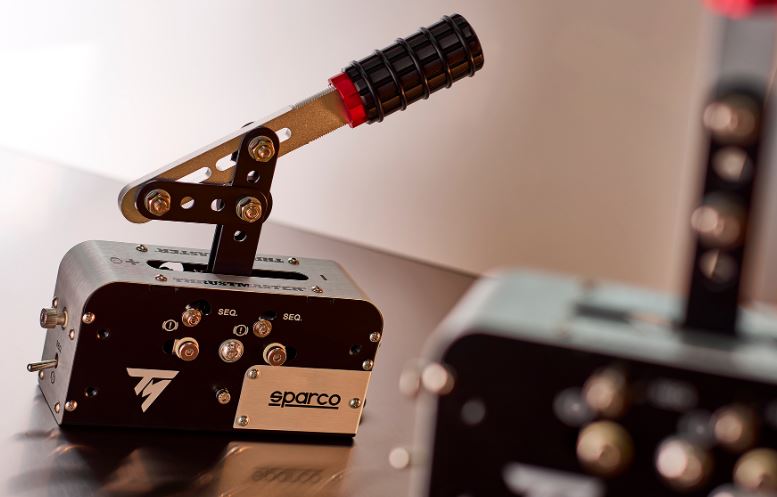 Who Should Choose the TSS Sequential Shifter & Handbrake Sparco Mod?

When you choose a shifter/handbrake mod that’s made from authentic mechanical parts, it’s because you want an authentic and immersive experience. The TSS Shifter is designed to never break down, and it’s adaptable enough to be used with virtually any racing wheel, inside or outside of the Thrustmaster ecosystem.

In short, if you’re looking for something cheap, basic, and simple, this isn’t it. This shifter is easily four times as expensive as the entry level equipment with similar capabilities. But if you’re invested in authenticity and immersion, there’s almost no substitute for the detailed feedback you get from the TSS Sequential Shifter & Handbrake Sparco Mod. It feels great in your hands, and it might be as close to the real thing you can have without using an actual vehicle.