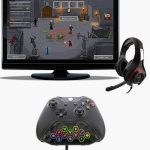 Playing Xbox with your friends is one of the most enjoyable modern activities. Xbox controllers are wonderful devices in their own right, featuring responsive buttons and an audio hookup jack that you can use to send your voice over the Internet and communicate with your buddies. This jack lets you connect a microphone and/or headset at the same time.

But the versatility of this port has only just begun to be fully explored. Many people are experimenting with different ways of communicating over Xbox Live and other online gaming services. Additionally, lots of people are attempting to find communication solutions when people want to play with their friends, but their microphone is out.

The Nyko Sound Pad Controller Attachment is one such development. It allows you to plug in an attachment to your Xbox One controller at the audio port. Then you can use its integrated software and hardware to send hilarious and unique sounds over Xbox Live. It’s not only a good way to communicate with your friends while your microphone is dead, but it can also be used for general hilarity. Let’s take a look at this controller attachment and see what it brings to the table. 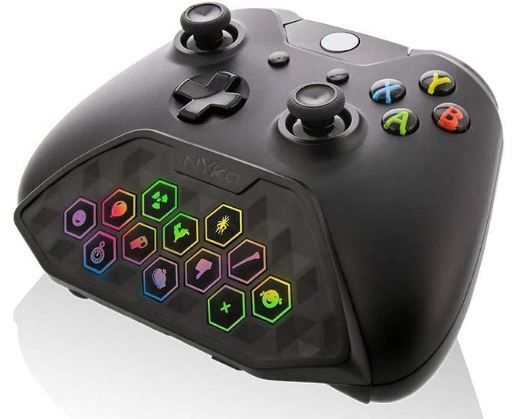 The Nyko Sound Pad is perfectly sized to fit in the negative space between either handle of a standard Xbox One controller. However, there is more than one type of Xbox controller on the market. Several advanced controllers may have bigger handles or special rubber pads to make it easier for sweaty hands to grip the game pads over long stretches of time.

The Nyko should still fit with these different handles as the size and space difference isn’t very noticeable. It might take a little wiggling to plug the sound pad into place, of course. 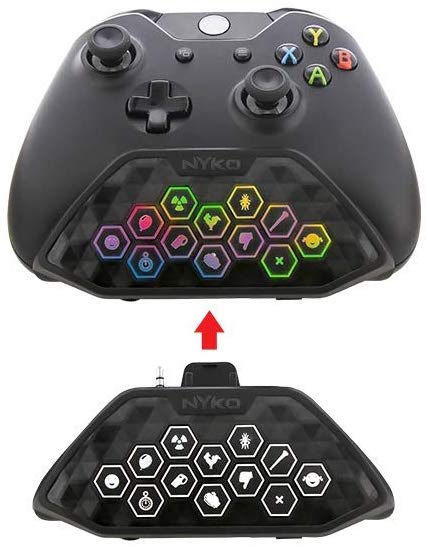 Regardless of controller type, the sound pad attaches to the bottom of each controller through the 3.5 mm port. There’s only a single port on standard controller setups, so you won’t be confused or accidentally plug it into the wrong slot. It’s the same port through which you would plug in a regular headset for voice chat or hearing your teammates. 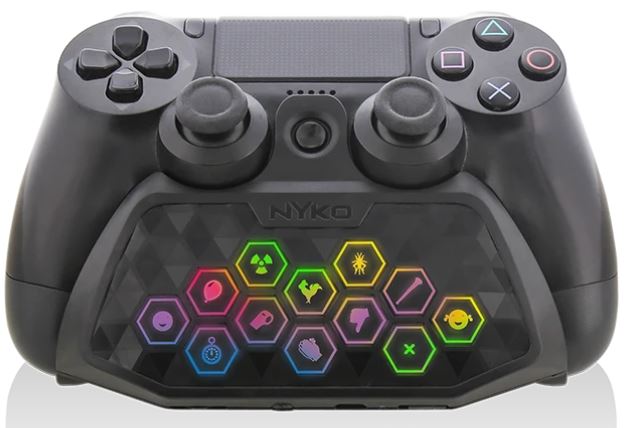 This does mean that the Nyko Sound Pad is not compatible with the rare Xbox One controller that doesn’t have a 3.5 mm port. These are normally flashier and third-party controllers, however. Anything from Microsoft or any of the main brands should be fine.

There are 11 buttons in total, spaced relatively evenly along the sound pad space. The texture is relatively smooth and comfortable when you run your thumb across the surface, although the buttons feel slightly different so you can eventually form the muscle memory necessary to hit the buttons without looking. 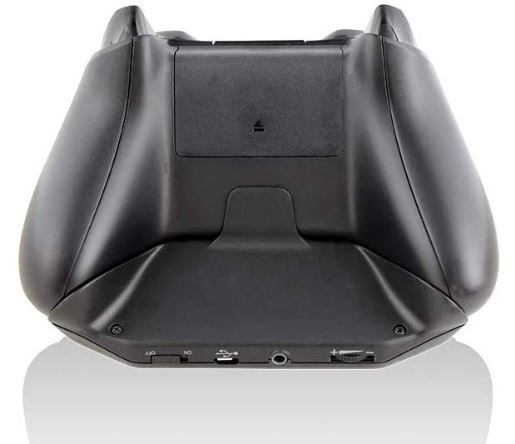 Furthermore, each button is backlit. This allows you to use the sound pad even when playing in low light environments. You’ll be able to customize the color and programmed functionality of each button to your liking. Ultimately, all these features make the Nyko very easy to use and install and are well worth the low asking price.

Where the sound pad is less impressive is its durability. It’s far from the toughest game at accessory on the market and, if dropped, there’s a good chance that the plastic that primarily makes up its material will crack or chip. The electronics seem to be decently robust but we wouldn’t bet money on it continuing to work if the damage was something that could also break the host controller.

Additionally, the buttons for the sound pad are spaced out so that some of them reach toward the center of the pad surface. This makes sense from an aesthetic point of view, but it does require you to stretch your thumb out to reach the center buttons. This can be a little uncomfortable and can make pressing the center buttons a bit tricky. It would’ve been slightly smarter designed to place the buttons into clusters on either edge of the sound pad, closer to the main handles. 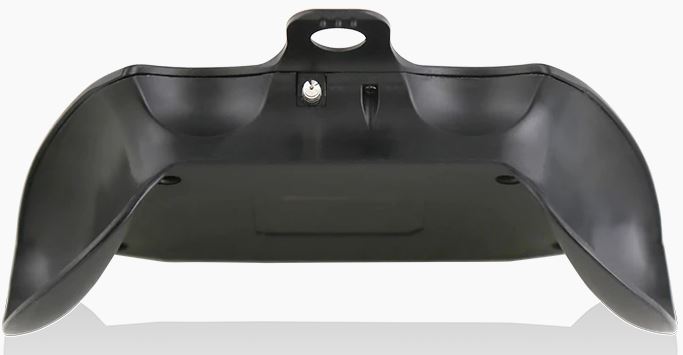 Once fully charged, the sound pad lasts for about eight hours before needing to be recharged once again. The recharging process from empty only takes slightly over a couple of hours depending on the power connection. Additionally, you can increase your battery lifetime by lowering the brightness of the buttons or by using a headset with the sound pad.

You can also change the backlit settings for each button and make them dimmer overall. This is a great way to conserve battery lifespan if you aren’t too interested in a variety of colors available for the buttons spread. It all comes down to personal preference. All in all, this charging scheme is decent enough but would be better if the sound pad could draw power straight from the controller. Wired controllers, in this instance, would never allow the sound pad to run out of battery and bypass the need for recharging entirely.

The Nyko Sound Pad features 11 customizable buttons spread across its surface area. The buttons provide a unique way to communicate in either party chat or other online games by sending customizable sound effects over the voice chat function. It uses the same audio technology that you would use to deliver your voice to your teammates.

However, the sound effects are controlled by digital technology rather than the quality of a microphone. Because of this, the Nyko sound effects actually sound a little better than someone’s voiceover from a poorly cared for microphone one of the default microphones that come with a standard Xbox One console purchase. This does make it helpful if your microphone is broken or if it doesn’t do a great job of delivering your voice over chat. You can rely on these commands to still effectively communicate with your teammates and provide squat orders.

The 11 buttons come with preset sound effects, although you can customize each button individually by changing where each sound effect rests or a few different types of sound effects across several categories. There’s also a handy cancellation button that instantly stops the playback of any sound; we really like this feature as it may be necessary to quickly change your sound effect in the middle of a tense game, and some of the sound effects can go on for several seconds.

You can also change the volume of individual sound effects via a dedicated volume control button. This is great as you experiment with different voice commands and sound effects; some are much louder by default. Having the option to increase the volume they make is great if multiple people are speaking over the same chat channel at once. Alternatively, you can lower the volume of annoying sounding effects. 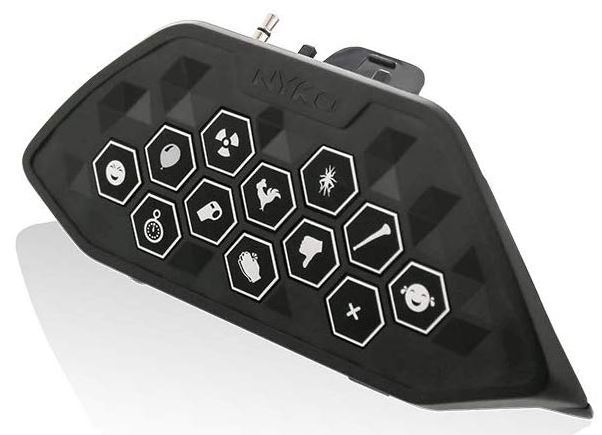 The included sounds are pretty diverse and easy to identify via the button symbols. Chicken sounds, for instance, play with the designated chicken-shaped button, whereas there are other noises for claps, laughing, and even flatulence. These are a bit “kiddy” for many, but even adults might find some amusement from flaring these over the microphone. Your mileage may vary, and we can’t really score points based on this rather subjective aspect.

You can also program your own individual or customizable sounds with the right software or app. This enables you to have prerecorded voice commands ready for your next serious game or provides several opportunities for trolling. For instance, you could easily have your younger sibling record commands in a higher voice, then use these in a more mature game to the hilarity and confusion of your teammates. 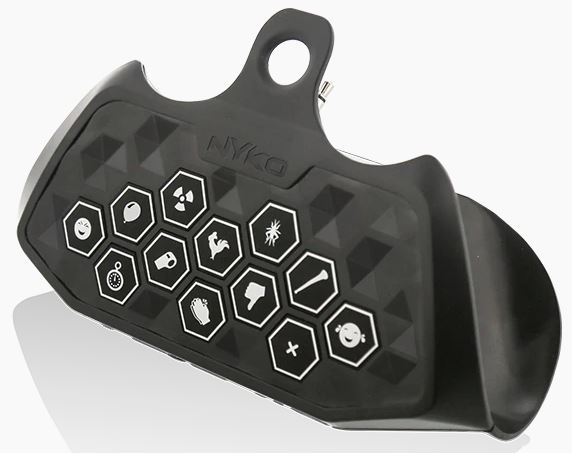 The only real downside is that you can change the icons of the buttons themselves. That means you’ll have to memorize what each symbol means even after you change the sound effect. It won’t be too difficult if you use the Nyko exclusively for quite some time, but it can be a bit confusing if you spend time away from the Sound Pad and come back to it later.

All in all, the Nyko Sound Pad is an interesting and altogether fun attachment for the Xbox One controller. While it’s far from a necessity, particularly for serious gamers, it’s a great device for general fun and games. It allows you to send a wide variety of sounds over Xbox Live both for communicating during multiplayer games or just for entertainment purposes. It’s also nice that they allow you to customize the button set to your liking. 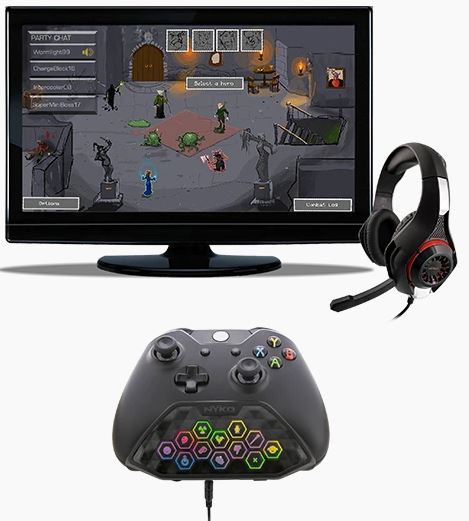 This being said, some of the sounds are a little juvenile, which does leave it as a product for younger folks. Kids getting their teens and above will probably start to leave this behind as they get older. On the other hand, it’s programmability does extend its lifespan significantly. Being able to change the sounds that the sound pad produces is an excellent feature and is great in terms of value for money. You can get this for such an affordable asking price that it’s a little silly not to try it out for yourself if you’re even a bit interested.

It’s a good gaming gift through and through, and a solid attachment for those who enjoy gaming more for fun than for serious competition.