Why is it so hard to find a consumer camcorder that can film a decent picture in low light conditions? Technology should definitely have cracked this nut by now. I mean, really, it’s been, what… almost fifty years since the beginning of the Information Age? When Mr. Camcorder invented the handheld video recorder, I can’t imagine he thought it would take so long for the gadget that carries his namesake to develop into a full-fledged fully-functioning video camera.

It’s all about the sensors, guys! You can fill a camcorder to the brim with 4K quality resolution and fancy image stabilization, but if you have a tiny sensor, your low light video quality is going to stink. It’s only sunny out half of the time, but we don’t schedule our camera usage around the solar cycle, and we shouldn’t have to. We want a camera that works all the time. Is that too much to ask? Something tells us that we’re about to find out: but first… some romance.

When Mr. Camcorder and Ms. Panasonic first met, it was love at first sight. They both knew instantly that their meeting was a match made in paradise; a match which would help them both achieve their common goal; the production of a well-rounded video production device.

There was an insatiable hunger in Mr. Camcorder’s eyes and an eager longing hidden in the coy glances of Ms. Panasonic. The passion could no longer be contained. Several button-mashing moments later, Mr. Panasonic found herself in a vulnerable state. Is it really a surprise to anybody that they are about to give birth to a precious little gadget? That’s right, folks. The tech stork is on its way, and it comes bearing good tidings. Born 0.96 pounds, the Panasonic HC-V800 HD Camcorder is a versatile video recorder with a focus on its lusciously plus-sized sensor.

The HC-V800 is an upgrade to Panasonic’s 2015 release, the HC-V770, which featured some significantly lower quality specs, including a smaller image sensor and a lower optical zoom range. The HC-V800’s most impressive feature is its large MOS 1/2.5-inch sensor. Because of its uniquely large sensor, this camcorder offers some truly impressive recording quality in all lighting situations, but really shines (no pun intended) in low light conditions – especially when compared to other camcorders. One of the things you’ll notice with camcorders featuring a small sensor is some major blurring and graininess in low light shots: not to mention a decrease in color accuracy and contrast. The larger sensor on the HC-V800 keeps the quality consistent, sharp and sexy.

The HC-V800’s wide angle LEICA Dicomar F1.8 lens works perfectly in combination with the large MOS sensor. With an impressive 25x optical zoom, you can really get intimate with your subjects during those special moments, even when you don’t have the perfect amount of natural light. Filming real life isn’t like filming in Hollywood. We’re not constantly in an incubated bubble of perfect lighting. Sometimes the lighting of reality isn’t ‘just right’. That’s why it’s so important for a consumer grade camcorder to be versatile. Along with the 25x optical zoom, the Dicomar features a F1.8 aperture and a 25 mm wide-angle to a 600 mm tele focal range.

The best part about having a wide-angle lens is that you can fit in more of the action into your frame. There’s no more need to miss out on any action that might be going down beyond the borders of a standard aspect ratio. The rotatable LCD screen makes it super easy to take self-shots (I refuse to call say selfie. I will never say it. Selfie is a word I will never utter. Selfie. Such a train wreck. Selfie.). 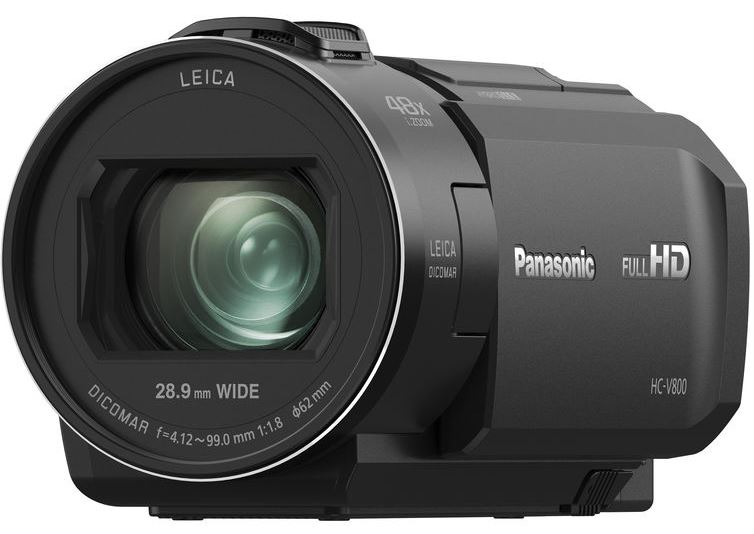 Anyone who has ever handled a camcorder knows the challenge of maintaining a stable picture when filming free hand. While poor image stabilization might give shaky cam horror movies a certain kind of charming queasiness, nausea is not a quality you want in your home movies. The HC-V800 incorporates not one, not two, but three image stabilization o.I.S. technologies.

Panasonic has loaded this baby up with a 5-axis hybrid o.I.S. Plus, ball bearing o.I.S and Adaptive o.I.S. While the 5-axis feature is similar to the standard image stabilization featured in most modern camcorders, the Ball Bearing option is great for keeping your picture clean and steady while filming shots that require small-amplitude hand movements, which in turn, reduces the wear sustained by the drive section. The Adaptive feature uses an algorithm to intelligently select the appropriate IS controls based on shooting position, conditions and even user characteristics. It’s super intuitive. The result is a stable picture in a wide variety of conditions.

One of the features we find the most exciting is the HC-V800’s wireless twin-camera feature, which allows you to shoot the same scene from two different angles simultaneously using your smartphone. If you really want your home movies to have that Scorsese feel, this is going to be a great option to consider. Or you can always launch your own two-camera sitcom. It certainly couldn’t be worse than The Big Bang Theory. Our point is: having two viewing angles gives you the opportunity to delve deeper into video editing and lets you create something that looks way more professional. 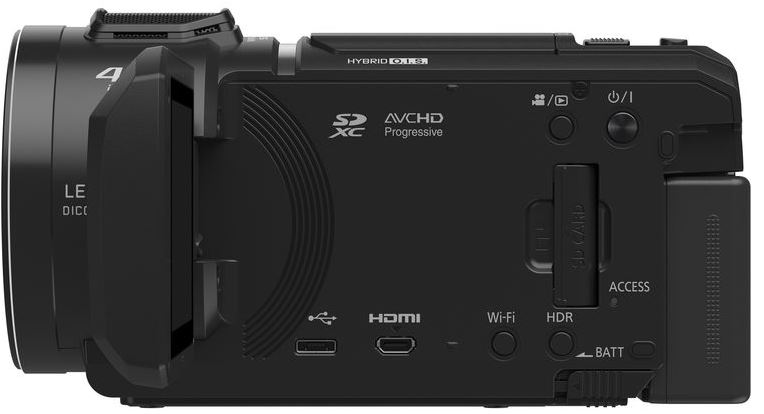 The HC-V800 also brings to the table some impressive automated modes which help you keep your video looking its best. Its Active Contrast mode automatically equalizes the contrast, flattening the gradations when you’re filming scenes with high-contrast colors. keeping your picture looking nice and sharp. The camera’s HDR mode gives the video’s color a nearly unreal realness by enabling a wider range between the footage’s light and dark areas. 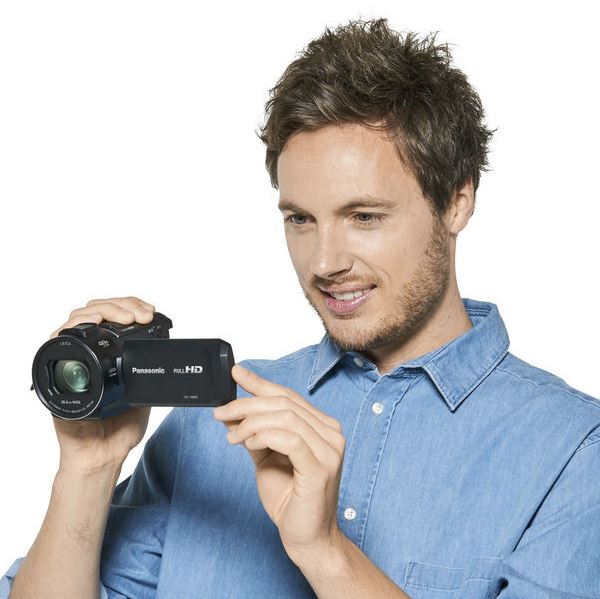 One thing noticeability missing from Panasonic’s HC-V800 is the ability to record in the 4K format. For a lot of people, this might be a deal-breaker, but the camera’s Full HD 1080p resolution is perfectly acceptable when you take into consideration the larger than average MOS sensor. While some people might demand that they have the highest resolution possible, it’s important to remember that the many people don’t even have a way to display true 4K quality video, and premium 4K video recording typically comes with a premium price. With that being said, the quality does not suffer because of the omission of 4K resolution, especially after considering the price and the superb low light functionality.

In addition to Full HD video, the HC-V800 can take 26 MP still photos. While the photos are clearly not the star of the show, 26 MP is a very respectable number. The in-camera audio records using a 5.1 channel in surround sound, recorded through a wind-shielded microphone to help reduce unnecessary white noise. The expandable storage is compatible with all three major formats: SD, SDHC and SDXC. 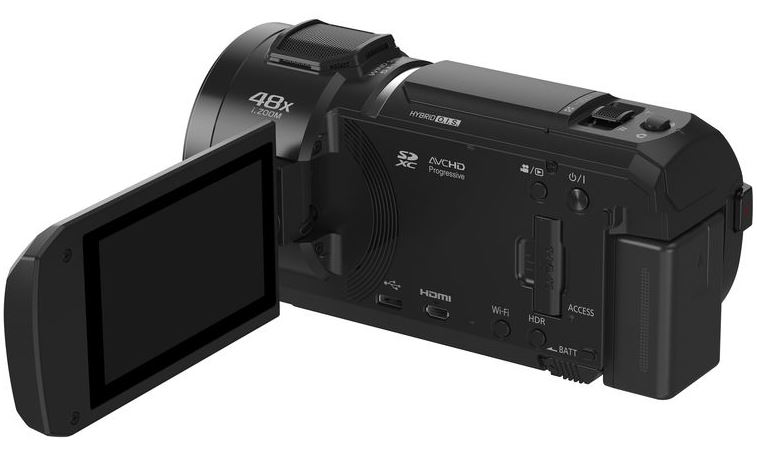 We really enjoyed the feel of the HC-V800 in our hands. The ergonomics feel like they were well thought out and well-tested. We felt absolutely no wrist or finger strain throughout our testing process. The camera itself measures 68 mm x 77 mm x 142 mm (2.7 in. x 3 in. x 5.6 in.) and only weighs 428 g, or a little less than a pound. It takes up very little bag real estate and could probably even fit in your pocket if you squeeze it in or lose a few pounds. Or if you’re wearing MC Hammer parachute pants, which we do… everyday… and every night. You can’t touch this. No, seriously… this is a review model. Hands off, short stack. 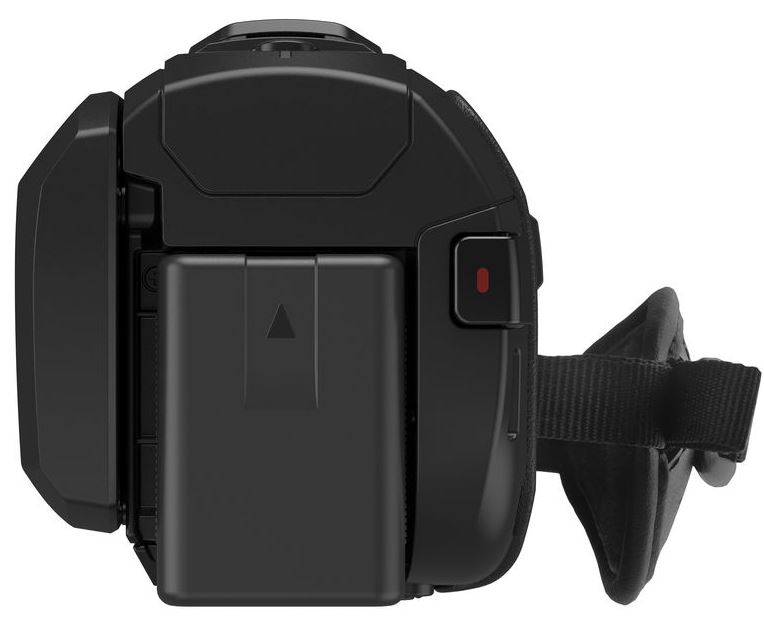 The slow-motion feature was a lot of fun to play with. Using slow-motion correctly can turn a mediocre shot into a subtle and emotionally touching shot. Whenever we record in slow-motion, we realize how truly moving the little moments in life can be; a sideways smile from the person you love, a slight touch of the hand, the joy in a child’s eyes. The slow-motion feature on the HC-V800 really helps you capture the touching nuances of life, which is what life’s all about ultimately.

When you take the leap and buy your first camcorder, it would be wise to invest in a good case. The HC-V800 does not feel fragile, but it is also not made for any heavy-duty adventuring. If you’re willing to make the investment in a high-quality camcorder, you’re definitely going to want to protect the investment. All of the sensors and features we’ve discussed are highly-sensitive technological marvels, and we should treat them just as good as they treat us (which is why I lit my Zune on fire and threw it off of a bridge into a pit filled with acid). 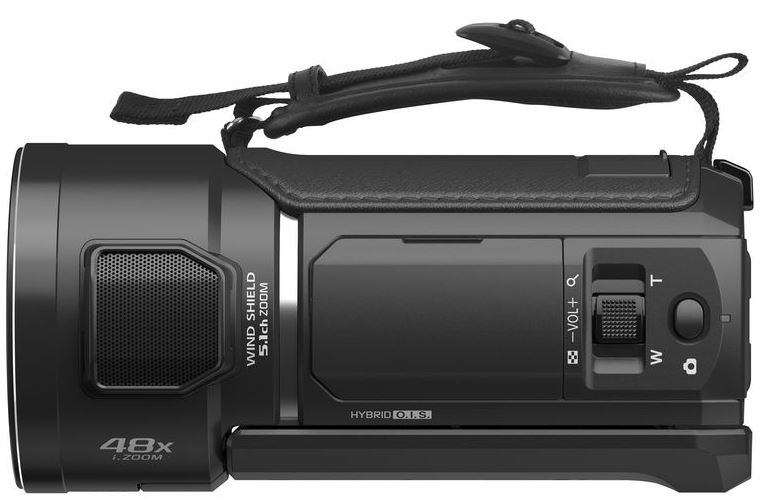 All in all, the Panasonic HC-V800 is a solid and versatile camcorder that will meet the requirements of pretty much everybody. While we’ll be the first to admit that we aren’t expecting anyone to film a professional blockbuster motion picture using this camera, that’s not why you’re buying it for in the first place. Since the HC-V800 doesn’t film in 4K, some people might be initially turned off, but they shouldn’t be. The Full HD 1080p offered by this device doesn’t disappoint, and looks terrific when it is combined with the LEICA Dicomar lens and the large sensor.

The bottom line is that this is a total recommend. This camcorder isn’t going to break the bank and it’s going to deliver some major quality. If you’re planning on doing any type of video recording in low light environments, this is the clear camcorder for you. We have no doubt that the HC-V800 will capture our sick breakdancing skills the next time we’re at a club with dim lighting. In fact, if your club isn’t dimly lit, you’re not clubbing right. Is this the world you want? Clubs refusing to dim their lights in fear that people won’t bring their tiny sensor’d camcorders? Well, forget it. We’re not letting it happen. A world without dingy night clubs is no world at all. That’s what we always say.