As pet owners, we’re constantly thinking about our pets. Just like children, our furry friends are dependent on us, and desperately crave our attention. As much as we’d like to be, we can’t always make sure they are happy and healthy at all times.

While you’re at work, how can you keep tabs on your pets? This is a question that tech companies have been trying to answer for a while. We’ve got remote feeders and toys that help them stay engaged and healthy, and give us a digital line of communication to them at all times. But the Pebby is a little more than that. It takes a simple concept, and modernizes in a high-tech manner. When they first announced it, consumers were so enthralled with the idea that they managed to raise nearly a half-million dollars in no time at all. What is it that makes this concept so appealing? Let’s take a look and find out. 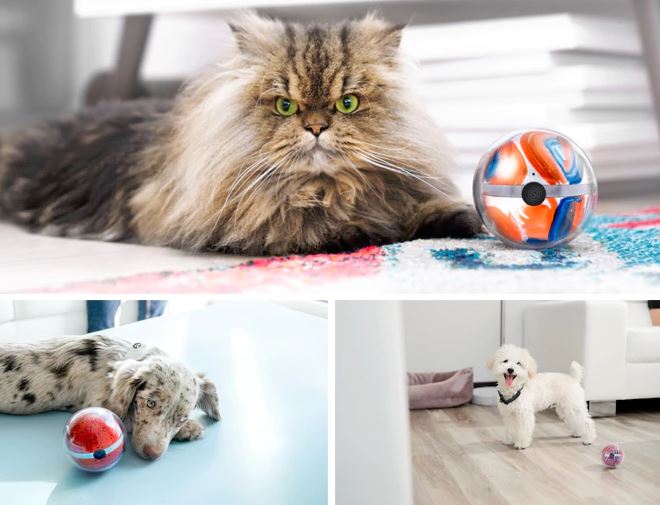 There are two main components that make up the Pebby: a ball and a collar. The ball is the core of the system, and the main component that your pet will interact with. It has a built in camera, wireless communication, a motor, and an advanced stabilization system. This lets you drive the ball around like a remote-control car, and keep tabs on your pets reaction with the camera. The collar is designed for fitness tracking purposes, so you can keep tabs on your pets level of activity. This doesn’t happen only when your pet is playing with the ball. It’s tracking activity 24 hours a day, seven days a week. It’s only when they get close to the ball that the data is synced up. And if your dog is anything like ours, they’ll spend a lot of time with that ball.

Upon opening the box, you’ll find a few different items. Of course, you’ll get the collar and the ball. But you’ll also find a large plastic box. This is actually an inductive charger. They call it the kennel, and by rolling the ball inside of that you’ll be able to charge up the ball. Our Pebby came pre-charged, but it can’t hurt to throw it on the charger for a little while. When inside, you’ll be ready to pair.

The next thing you’ll want to do is download the free Pebby app. You do have to sign up, which only takes a second if you use the “sign in with Facebook” option. All of your data is uploaded through Pebby’s server, so you can access it remotely. This explains the need for an account.

Next, the app will start by searching for the Pebby, which should be in Sync mode if it’s in the kenel. Once it pairs to your phone with Bluetooth, you’ll have to enter your network settings so the Pebby can access your WiFi. From here, you’re ready to play!

The Pebby ball is one impressive looking piece of equipment. When first looking at it, you’d be surprised at how much technology they’ve managed to cram into this little thing. It’s about the size of a tennis ball, and is actually a two-part enclosure. The outside is made from a thick, durable poly-carbonate material. This is scratch proof, dent resistant, and slobber (water) proof as well. This is why your pets can play with it without damaging it. 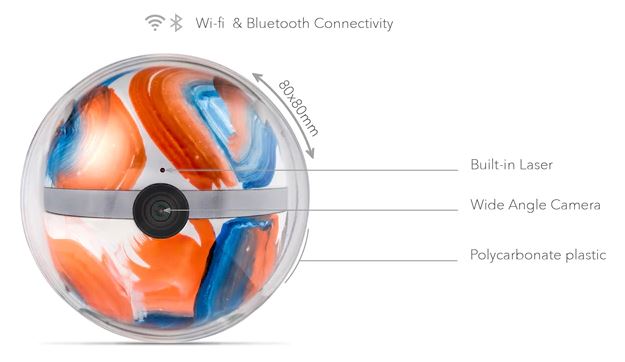 Inside, you’ve got the actual Pebby ball. It’s suspended in mid air using what they call a SHOCK suspension system. This uses magnets to keep it floating, and has one unique side effect. When you roll the ball, only the external enclosure moves while the internal ball stays centered. This is how the camera stays straight, so you can see what is going on.

Moving further into the ball, we quickly learned that there was some pretty powerful hardware. The brains of the operation is an Intel Edison computer, which operates a gyroscope that allows you to move the ball at up to 1 meter per second in any direction. Video feed is handled by a 720p wide angle camera that captures the entire room, and uploads the shots online. If you’re a cat person, you know that they might not be as interested with a ball as a dog might be. Since you won’t be able to get the literal ball rolling, an internal laser pointer should help you get the figurative one rolling. The system is powered with a 2.5 amp hour battery, equivalent to what you’d find in modern smart phones. 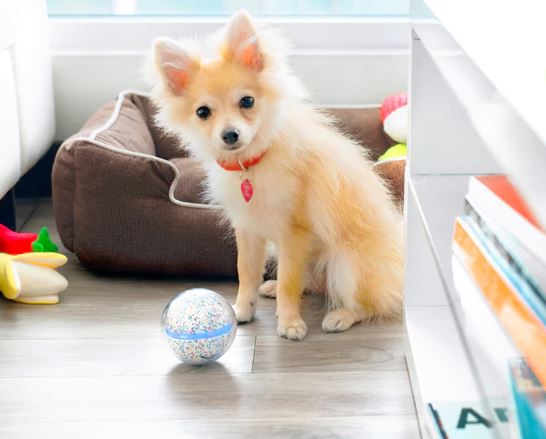 The Collar, despite looking simple on the outside, is just as powerful on the inside. It’s got a 9 axis accelerometer that can detect movement in any direction. It can also measure atmospheric pressure, magnetic fields, and the temperature of both the environment and your pets body. Think of this like a super accurate GPS. It won’t just tell you where your pet is going, but how fast. While you don’t spend much time looking at the raw data, this allows the Pebby to get a pretty accurate idea of their fitness level. While the battery isn’t large, it’s large enough to keep the collar running for 8 days on a single charge.

Now that we know how it works, let’s take a look at see how it operates in the real world. When you fire up the app, you’ll see a number of options available to you. You can view the video feed, sent some sounds to your pet in the form of your voice, or a pre-recorded “meow” or “woof.” When you send a sound byte to your pet, you’ll hear their response in the form of an audio recording. But the real action takes place in the video feed. There are controls on either side of the screen that let you ‘drive’ the ball around. With luck, your pets will try and chase it. 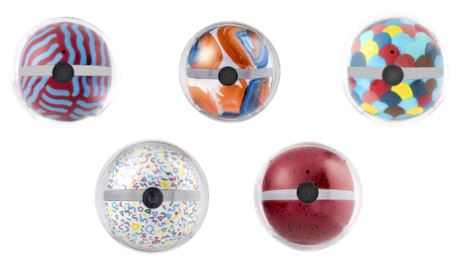 The camera is extremely good at detecting your pets, and keeping the camera stable and fixated on them. You get a crystal-clear video feed of the action. It feels just like a well-polished video game, only you’re actually interacting with your furry friend in the real world. You can flip on the laser pointer at any time, and watch your pet chase it.

The controls are very tight, and surprisingly well designed. This wasn’t a game just designed for our pet’s sake. It was fun for us, too! It was hard to resist busting our phones during a particularly boring meeting, or while commuting.

But once playtime is over, you can head back into the app to check out some more data. You can look at the image gallery, and see the shots that the camera has saved of your pet. You can check out the fitness data, and see how much exercise your pet is getting. We were pleasantly surprised at how comprehensive this system was, rivalling the wearable fitness trackers we’ve used ourselves. 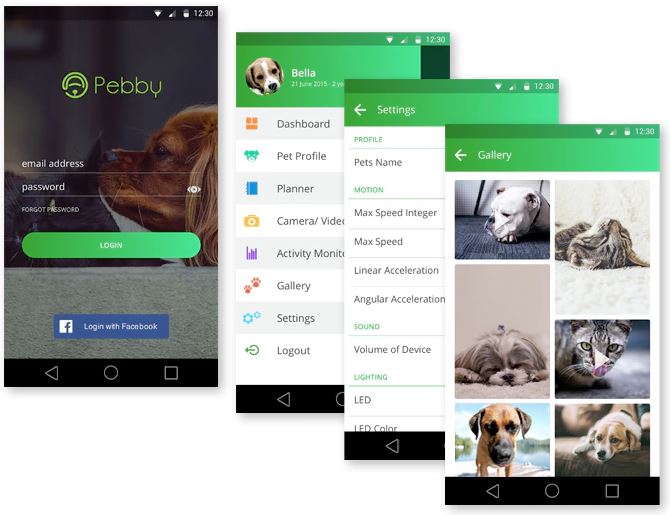 Our only real gripe with the Pebby was the fact that the collar needs to Sync with the ball. If your pet hasn’t played with the ball in a while, the data can be outdated. At this point, the best way to correct this is to play with your dog for a few minutes. Get them near the ball, and about 30 seconds later the data is downloaded. The catch is that your pet needs to be near the ball for a little while, so having them chase it around doesn’t always work right away. 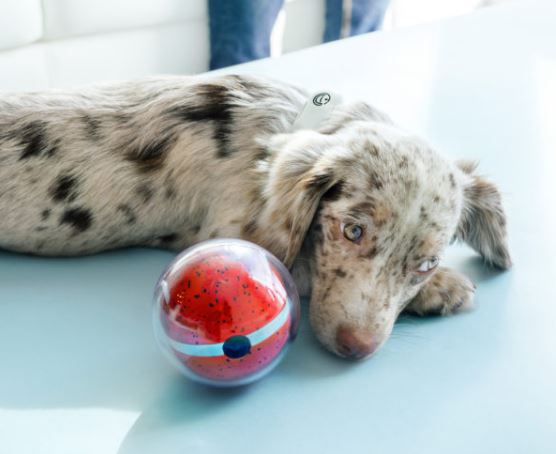 There is no doubt in our mind that the Pebby is one of the most exciting products for pet owners. The main draw is the simplicity of it. Sure, there is a ton of complicated hardware components, each of which performs a different action. But at its core, it’s very easy to use. You play with your pet in a manner that feels natural. It’s almost easy to forget that there is physical distance between you. You don’t see all of the tiny moving parts. You just have a game, and a way to stay digitally connected to your best friend, no matter where the world takes you.

It’s not often that we recommend first generation products. We usually find some kinks to be worked out, and recommend that consumers wait a while before purchasing for themselves. But it’s clear that the Pebby is a polished product, and we’d recommend it to anyone who hates being away from their pet.