If you’re a streamer, you may already be familiar with Elgato’s product line. They produce hardware that captures your gaming session, prepping it for upload to your favorite service. As you’re surely aware, there are tons of great software packages that allow you to do virtually anything you want during your game. Dub it over with audio from an external mic, add in text or an image overlay, and generally modifying the image as you see fit is easy to do. However, there is one small issue.

Since you’re working with software, you need to have your controls set up on screen at all times. This isn’t always ideal. If you have a second monitor you can do so without minimizing your game, but you still need your keyboard and mouse to be dedicated full-time to your gaming session. The Stream Deck is very different from any other product that Elgato has released, and promises to make triggering digital actions much easier for streamers. Let’s go hands-on to find out if this is a must have for every streamer, or a luxury item with limited suitable applications. 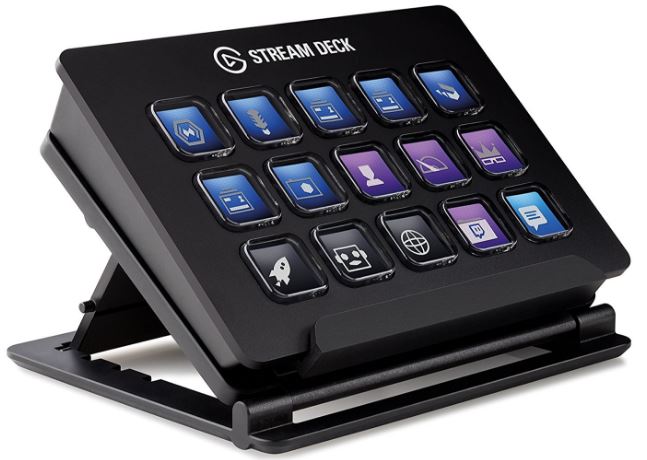 The Elgato Stream Deck is a small black box that is connected to your computer via a USB port. On the face, there are 15 individual buttons. Each of these buttons has an LCD screen inside, which you can set to trigger a number of pre-configured actions, or set your own custom tasks. When you’ve got a task assigned to a button, the screen lights up to show you what that function is. It’s configured through a piece of software that runs on your computer, and most of the important features are already pre-configured for you. What we like about this particular implication is the fact that Elgato doesn’t restrict you to their own software. You can pair it up with any application of your choosing, so the device is anything but restrictive.

The fact that this tool is fully integrated into a number of popular programs is one of the main selling points. Their software is already fully integrated with OBS, Discord, Twitch, and many other popular applications. This means that you can start and stop streaming, display the viewer count, change your scene, or trigger any feature that is generally operated from within the digital interface of any of the mentioned programs. 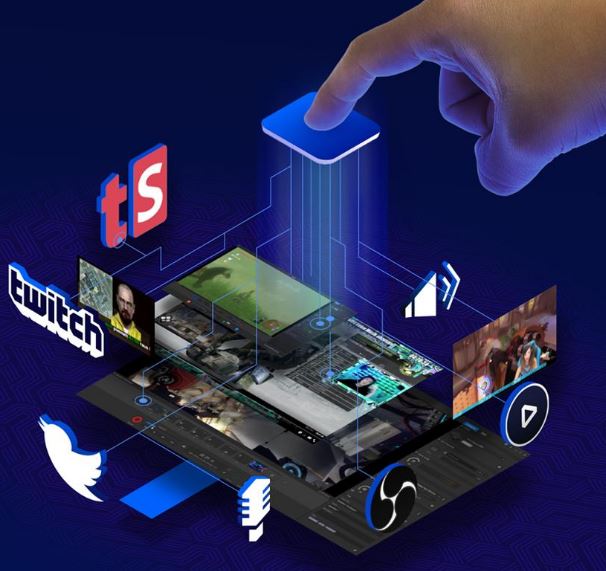 The fact that so much of this integration is already done for you is a huge asset. While there is some customization available, it can be a little challenging to set up. After all, not all software vendors open up their API to users. Because Elgato has already done most of the work for you, the only technical skill you need to access the integration features is the ability to click and drag. 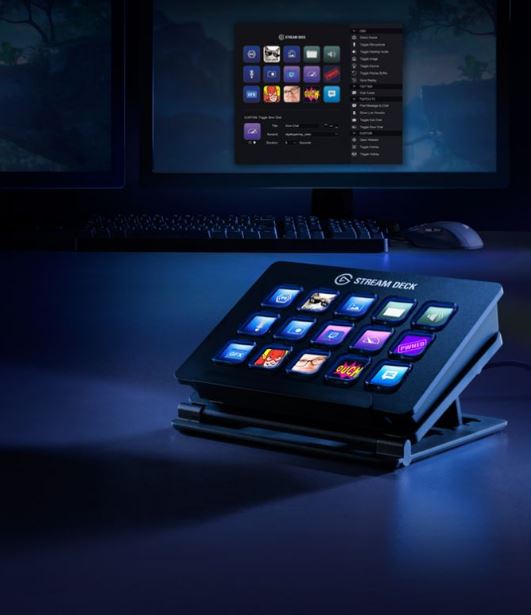 The Elgato Stream Deck is functional outside of the basic hotkey application. It can also serve as a notification panel. Want a visual indicator when somebody donates to you? No problem! This can help you know when to thank donors, making your live stream a much more interactive experience for your users. You can track how many followers you got on twitter, and the key layout can even be changed when certain actions occur. 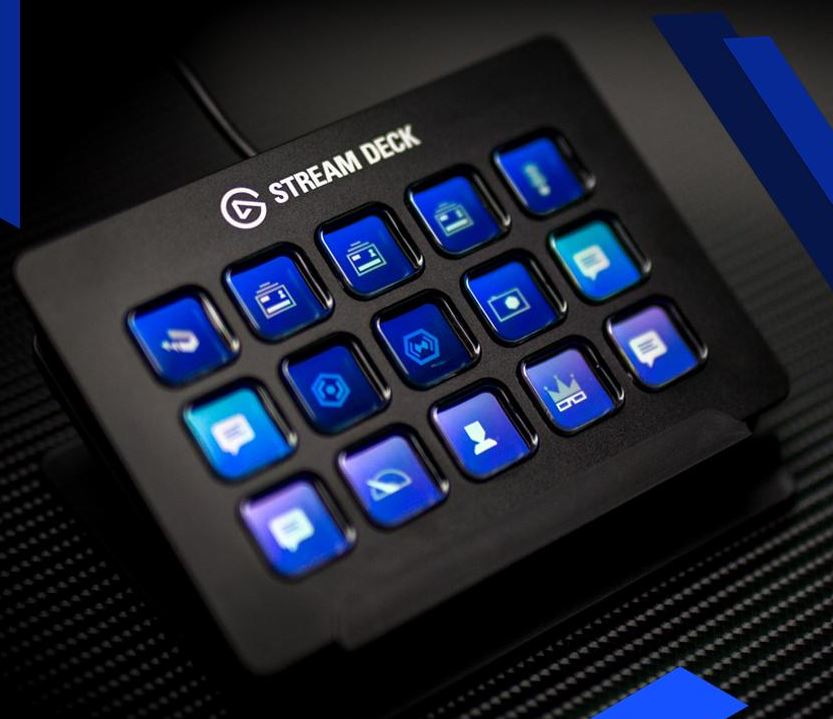 This is a very attractive looking device, but is also very easy to use. The stream deck can sit flat on your desk, but a small stand allows you to tilt it at the correct angle, giving you more options as to where you should place it.

While most of the enclosure is matte black, the color displays under each key really bring it to life. There are also several icon packages available. You can go for a brightly colored display that makes it look very much like a premium tool, or you can opt for something more sleek and subtle. Since most of the visual appeal comes from the displays, you have a lot of control over how you want your streaming station to look. 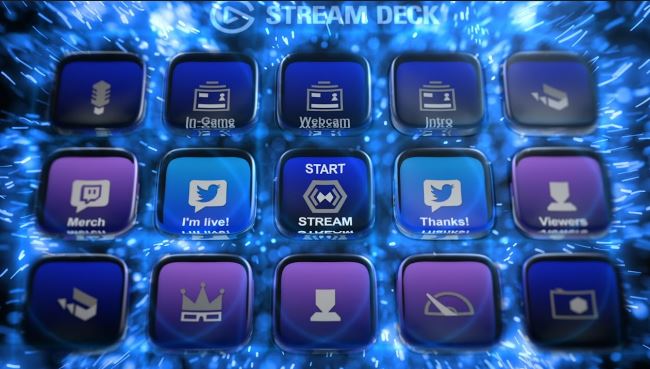 The software really is the powerhouse of the whole platform. When you first boot it up, you’ll find that the interface is quite simple. On the left, you’ve got a visual representation of how your stream deck will look. On the right is a scrollable window that shows you all of the potential actions you can choose from. They are grouped by application, so it’s pretty quick and easy to find the one you need.

To set up a new action, all you have to do is drag it from one side of the screen and drop it over an empty button. But the capabilities don’t stop there. You can turn one button into something similar to a drawer. When pressed, the entire screen will change. For example, on our Stream Deck, we used the three rightmost buttons to change scenes. The top right is our social media controls. When tapped, the 12 remaining buttons show us all of the indicators and actions we have set for that category. The center button is our video and audio controls, and the lower button is our Twitch controls. All of our actions are now no more than two button taps away, but we’re able to fit 36 different pre-configured actions all on one device.

You can even set one button to take multiple actions. Want to post to twitter and Facebook at the same time? Mute your microphone and start music playing? No matter what functions you want to pair, all you have to do is drag two functions onto the same button. When pressed, both will execute at the same time.

In reality, these settings can be quite complex. But getting them running isn’t hard at all. This is what we liked about the software. It takes something advanced, and makes it accessible to everyone. 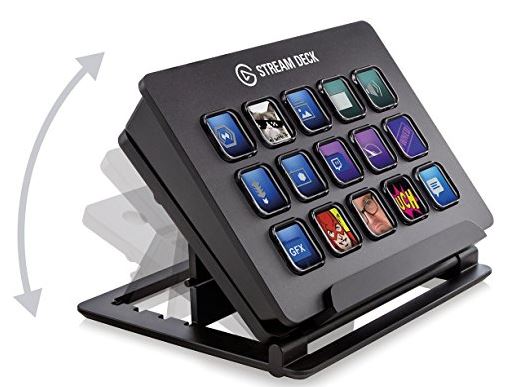 There are a few other key features that we really liked. The one thing that separates this from other hotkey hardware is the silence. The keys make absolutely no sound when pressed, so they won’t interfere with your streaming.

The next bonus feature is more for your own personal enjoyment than anything, but Elgato has released a web interface that allows you to create images to use on your triggers. This can help you add a little personal touch to the interface, which will be especially useful if it will be appearing in your streams.

Elgato is very clear about who their customer base is. If you’re a streamer, you’ll love this deck. But we’d like to see it expanded to include more customizeable options. We could see it being highly useful for video editing, Photoshop use, or any other program that could benefit from an additional layer of controls. It’s not that there aren’t any other options out there, but the Stream Deck is one of the cheapest models that money can buy, and its still very high quality. We hope that Elgato will capitalize on this additional market and update the software to be suitable for other applications. 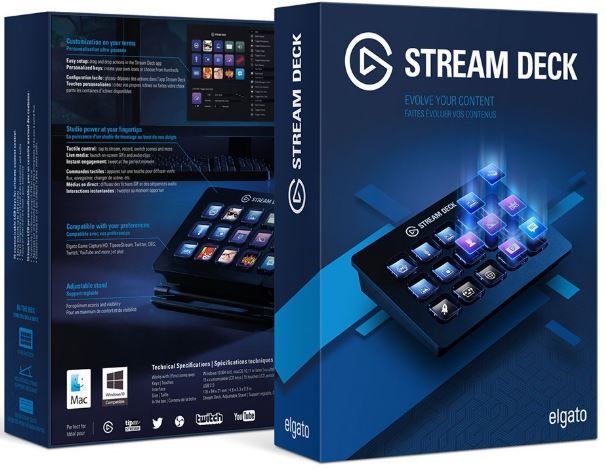 There is a lot to love about the Elgato Stream Deck. The software interface is extremely easy to use, so you don’t need to be a tech wizard to create something powerful. All of the most common software for streamers is already heavily integrated. With that in mind, the initial setup can be done in only a few minutes. It’s highly flexible, so you can create something simple and easy to use, or prepare and advanced array of many features spread out across several screens.

We’d recommend this to any streamer who wants to give their streams a more professional appearance. Due to the layout, you’ll be able to trigger advanced actions and modify the sound without breaking concentration. To your fans, it will look as if you’ve got a dedicated media team handling the post-production for you. Little do they know, it’s a one-man operation.

One of the major components of the stream deck is audio controls. If you haven’t already got yourself set up with a high-end microphone, we highly recommend that you do so. We did a roundup of the best wireless lavalier microphones, which gives you a nice overview of the options available.

Guide to the Best HDMI to DisplayPort Converter …
April 30, 2019