Anyone who lived through the 80’s knows that Polaroid cameras were unavoidable. The instant camera is as much of a part of retro culture as VHS tapes and hair metal. At the time of its release, the Polaroid instant print camera was a technological revelation. Before the ubiquitous takeover of mobile technology, Polaroid was the only camera brand that provided the user with instant gratification. Now, with the old days of dropping off a roll of film at our local pharmacy well behind us, it’s easy to take for granted the craze that Polaroid caused in the photo industry.

Take a quick glance around you the next time you are out in public and you’ll notice that the 80s are coming back in a big way. When the updated Teddy Ruxpin is the hot new toy of the holiday, it’s clear that 80s revisionism has begun to grace itself with its excellent presence. Now that millennials are beginning to creep towards middle age, nostalgia has taken the cultural wheel, and Polaroid had held on for the ride.

We were recently able to take a look at the new Polaroid POP Instant Print Digital Camera, which includes Polaroid’s patented ZINK zero ink printing technology. What we were hoping for was an updated instant print camera experience featuring modernized specs and functionality, without having to sacrifice our craving for nostalgia. Unfortunately, what we got instead was a product clearly rushed out to stores in an attempt to strike while the 80’s iron was hot. 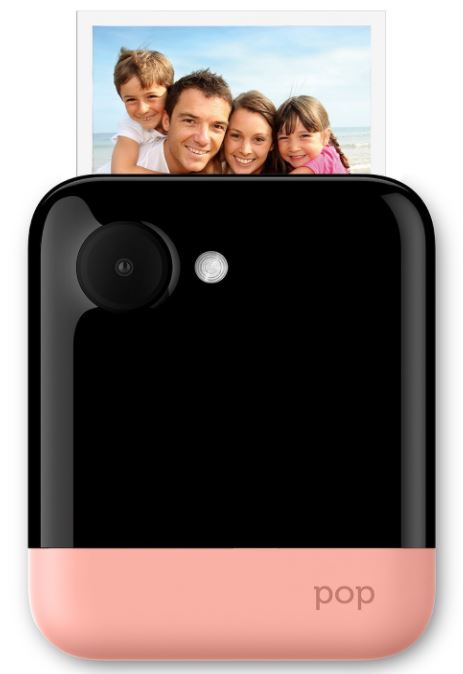 In celebration of their 80th anniversary, Polaroid has taken their brief chance in the spotlight to give the next generation an instant print upgrade. Their POP camera aims to be an ultra-portable powerhouse of photographic technology, but falls short at almost every level, even managing to screw up its most essential feature – its printing technology.

Our first impression of the Polaroid POP was a positive one. The camera’s small size combined with the promise of a 20 MP sensor was a reason to be excited. The build quality of the camera itself does not feel like a premium product. Its square-shaped plastic body feels chintzy and oddly light. Its plastic finish seemed to be a fingerprint magnet, and there were superficial scratches on the surface even after very light use. 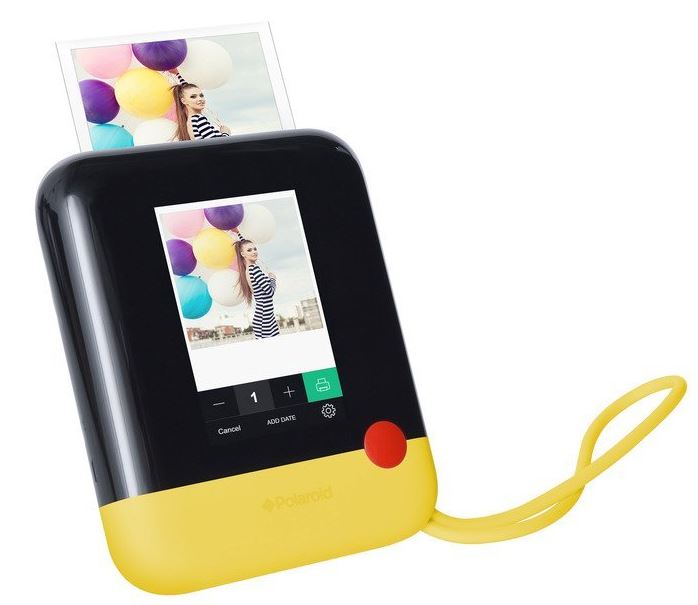 For a product that claims to be a new step in the advancement of digital camera technology, the blocky form factor makes taking photos feel pretty awkward. When we were testing out the POP’s selfie capability, we realized that the camera was nearly impossible to comfortably hold one-handed, which made taking candid self-shots a real problem. After taking a look at Polaroid’s marketing material I was surprised to find that Polaroid had already prepared the user for this problem by propping up its self-timer as some sort of technological marvel, rather than the standard feature that it is. 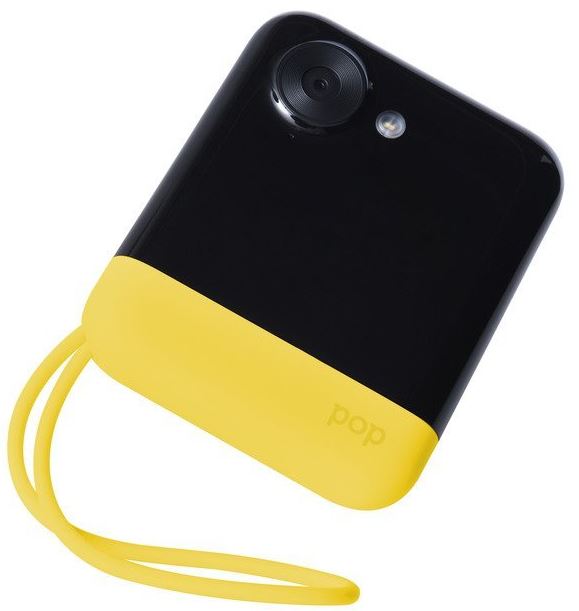 The biggest issue with the Polaroid POP is its biggest selling point – the instant printing feature. As much as it pains us to say it, the ZINK printing paper is just plain awful. It’s been over 30 years since the release of the beloved 80s model, yet the photo print quality has not only not improved, but has significantly decreased in quality. The prints look more like they were printed from an inkjet printer than a next-gen instant print cartridge. The photos’ colors are terribly inaccurate and any artificial light makes the photos take on an air of surreal distortion. 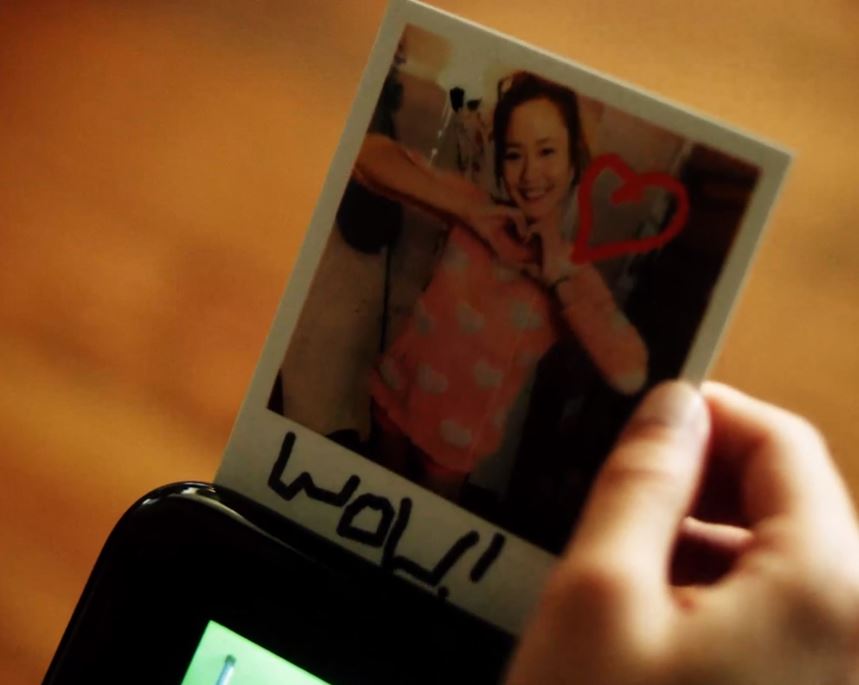 The photo prints were so poor that we honestly couldn’t believe that our model was functioning correctly. We even tried another pack of ZINK refills, hoping that perhaps we had been sent a bad batch. To our disappointment, the quality remained inadequate and disappointing. Photos took way too long to print, and printing multiple photos in quick succession was out of the question because the camera needed a cool down period after every other print. If the print quality was worth of the wait of a cool down period, we would consider it an excusable side effect of an aging technology – but the fact that the photos are so poor makes the slow performance seem even slower. 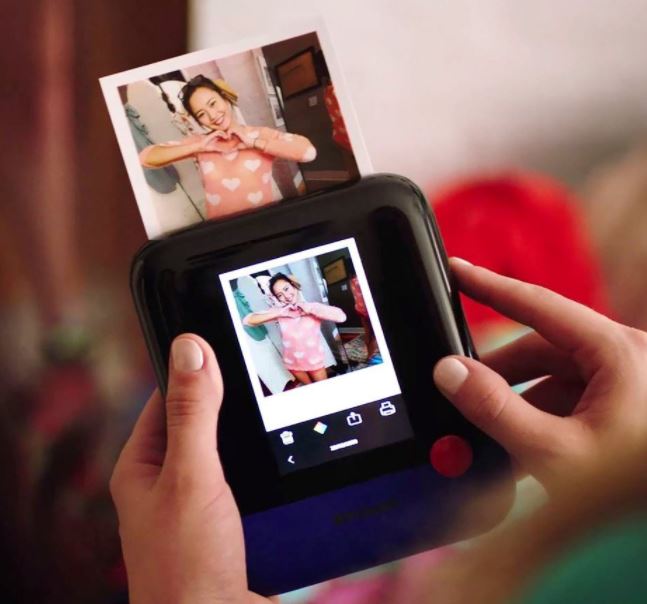 We were excited to try out the POP’s ability to sync with your phone and print out photos from your camera roll. Unfortunately, the Polaroid app for iOS was practically unusable. The Polaroid POP app promises the ability to print any photo from your smartphone in a matter of seconds, but the reality is that even when the app wasn’t crashing (which it did very frequently), we even found it nearly impossible to connect our camera to the app. 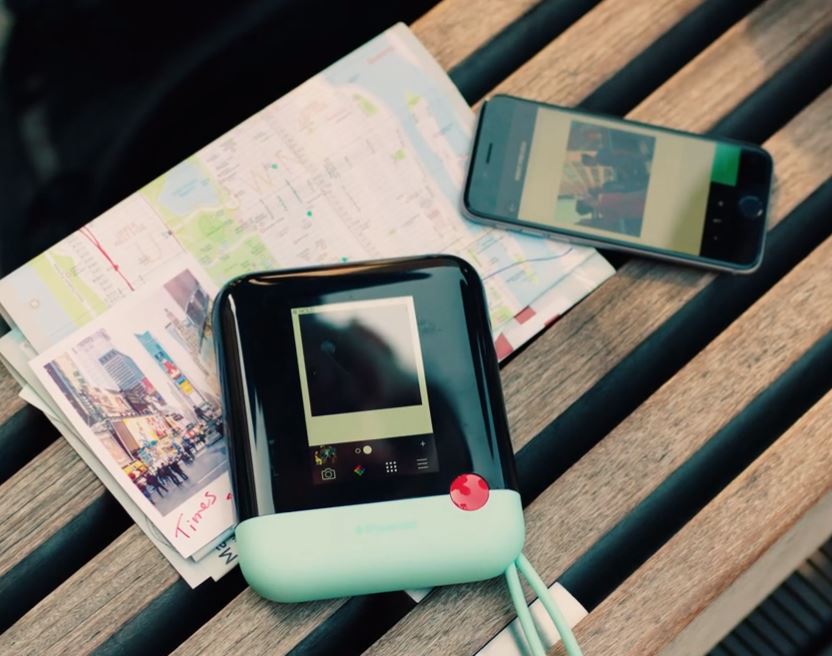 We were repeatedly greeted with warning messages alerting us of new firmware updates, only to discover that the firmware update would not download and install. We received the firmware warnings nearly every time we tried to connect our phone to the device. In the rare occurrence that we could print a photo, the app would immediately crash following the request. There’s not much more that can be said about the app other than that it plain stinks.

The native software on the camera itself was glitchy at best, unusable at worst. The POP would decide to turn itself off occasionally, and would only turn back on after we pressed the pinpoint reset button. It really is a shame that the camera doesn’t work better as a whole because the built-in filter software is actually kind of neat. We could see the POP being a lot of fun if it wasn’t for its poor execution. 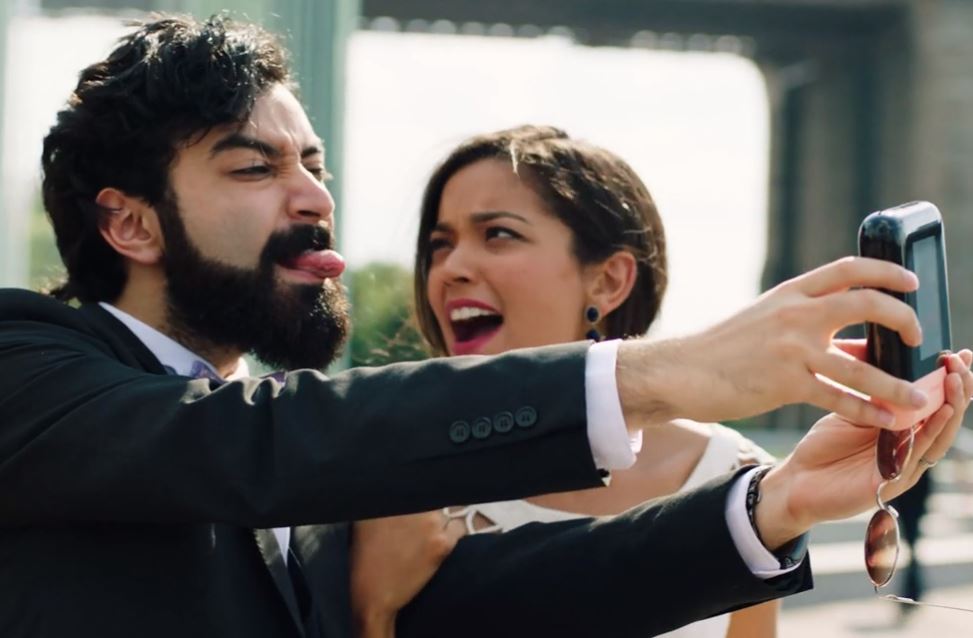 The Polaroid POP’s 3.97” touchscreen display quality was lackluster and grainy. The ability to mark up the photos was responsive enough, but the overall experience was disappointing considering that we expected much better screen quality from a device that does not have a viewfinder and sells for a premium price. As we have seen from lower-end model tablets, such as the Amazon Fire line, a great screen at a low-price isn’t an impossibility. The price point of the POP makes it feel like Polaroid was trying to cash out on a product that was knowingly inferior, which is a cardinal sin of tech companies looking to reestablish themselves.

The most impressive feature of the Polaroid POP was its video recording capability. The 1080p quality looked great in comparison to the rest of the features. Unfortunately, we don’t feel like the basic video capabilities that the POP offers are enough to make up for its long list of shortcomings. It’s like a tiny spray of lilac perfume on a huge pile of garbage – it doesn’t make all the much of a difference. 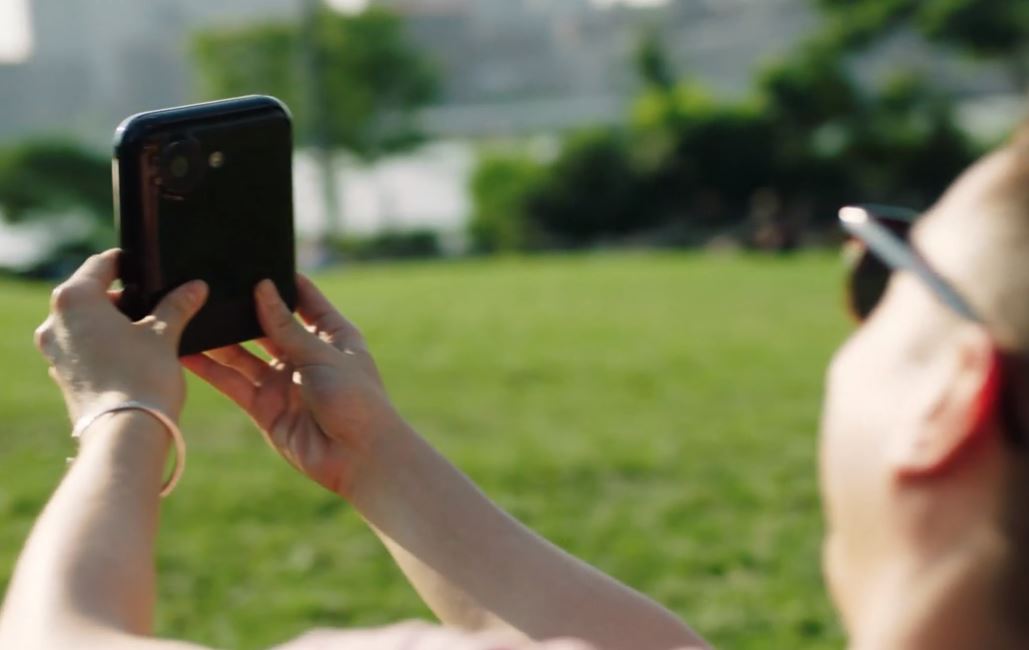 The POP offers a basic selection of features common amongst modern digital cameras, including image stabilization and digital zoom. There’s nothing special about the camera’s features other than its on-board filters and effects, which as we said earlier are cool in principle, but simply don’t work the way we want them to work.

The camera supports the common SD card formats up to 128 GB, which is a nice touch to go along with the HD video. Another qualm we had was the little rubberized bumper that protects that printer slot. I would have preferred an entire rubberized back instead of the cheap plastic mess that it has. The bumper does not fit very securely over the slot, and feels a little loose for our taste. It feels like a lost part waiting to happen.

Unfortunately for the Polaroid POP digital camera, the competition is pretty stiff. When compared with the better designed and cheaper Kodak Mini SHOT, the POP stands out like a big ole’ dirty thumb. The Mini SHOT surpassed the POP’s performance in practically every way. Even if the Mini SHOT only offers a 10 MP camera instead of a 20 MP camera (which doesn’t make a whit of difference unless you plan on printing out large prints, which I doubt you’d be doing with the POP), the Kodak 4Pass instant printing technology annihilates the Polaroid ZINK technology in a side-by-side comparison.

The Kodal Mini SHOT’s photos printed out with great color accuracy and very impressive detail. What might turn some people away is the Mini SHOT’s significantly smaller screen, but we actually found it appealing. Not only did the display provide a more accurate portrayal of the photos that were printed, but the size of the screen is similar to the size of an 80’s viewfinder, which allows the Mini SHOT to better capture that nostalgic feel that the Polaroid POP never seems to be able to achieve.

The real deal breaker with the Polaroid POP was its complete inability to connect to our phone through their dreadful iOS app. In comparison, using the Kodak app was like a breath of fresh air. The Mini SHOT’s Bluetooth functionality synced with my device without a hitch, and even better, could successfully print the photos that I transferred over from my phone’s camera roll. 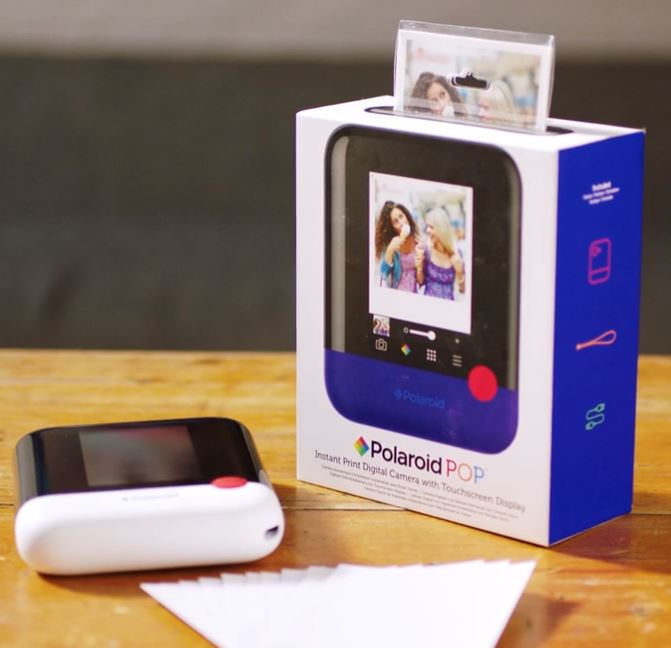 The ZINK instant print technology lacks any of the nostalgic wonder you would feel when using an original Polaroid camera. The photo print quality is similar to, if not worse than, the quality of a bundled inkjet printer. Its cheap build quality and awkward rounded-square shape are both confounding and disappointing – resulting in a photography experience that left us wondering where to place our hands, especially when trying to take a one-handed selfie.

The bottom line is that the Polaroid POP is a barely average, run-of-the-mill digital camera with an awful instant printer and even worse software interplay. For the price, we found that the POP’s lack of quality was inexcusable, especially when compared with the less expensive Kodak Mini SHOT, which manages to outshine not only the Polaroid POP, but its competitors as well. If you are faced with a choice between the two, the right choice couldn’t be any clearer. The Polaroid POP is a pass.