Drones are getting very affordable, and that’s forced more competition among entry-level flyers.

For most people, that’s probably a good thing. Because it means even if you pick a drone at random, you’re probably going to end up with a pretty solid device. On the other hand, for people who are trying to get the best possible performance for their dollar, it can still be essential to take a closer look at how any given drone performs.

The upgraded version of the Potensic D58 has a lot going on. First and foremost, onboard you’ll find some very solid camera technology, some above-average movement features, and a number of accessibility options that open up this device to novices and pros alike. For a relatively inexpensive drone like the D58, that’s already a pretty good start. 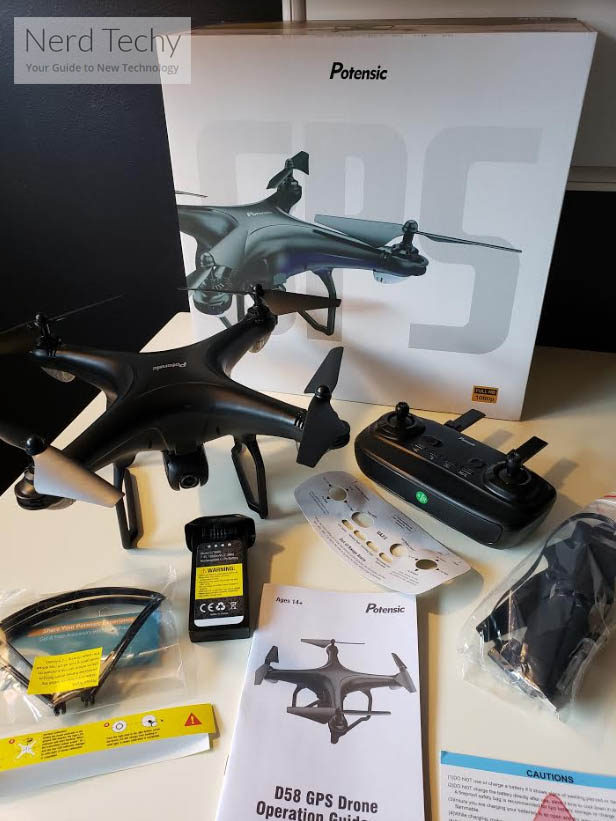 Of course, high-end drones can always do more. You might find drones that have swappable cameras, or drones that are even fully programmable. But for a simple video capture drone, the D58 is pretty well designed. It’s got enough of a feature set to act independently when needed, and to support you when needed. But is it any fun to fly?

In terms of appearance, the D58’s quadcopter fuselage has a matte black paintjob that looks generally high-tech. More importantly, it doesn’t attract glare while in direct sunlight. Plus, the black coloration makes spotting the drone incredibly easy during the day. When it’s night, or when visibility is reduced for other reasons, spotting drones can be a little trickier, which can get in the way of manual operation.

That’s when a couple of good lights can help the most. You’ll be glad to know they’ve equipped each arm of the D58 with a pair of significantly large LEDs. The brightness of each individual light isn’t enough to blaze its way through inches of thick fog – but the fact you’ve got four separate lights in a particular formation makes it much easier to spot the D58 in a wide variety of circumstances.

Unfortunately, the D58 does not make use of brushless motors, which puts some soft limits on what you can expect from the flight performance. Yet it still manages to deliver pretty powerful propulsion systems. The motors they’ve used allow for a generally higher RPM on the blades, which creates not just a stable flight, but a responsive flight experience. When you tell the drone to turn, it turns, not unlike using an RC car. 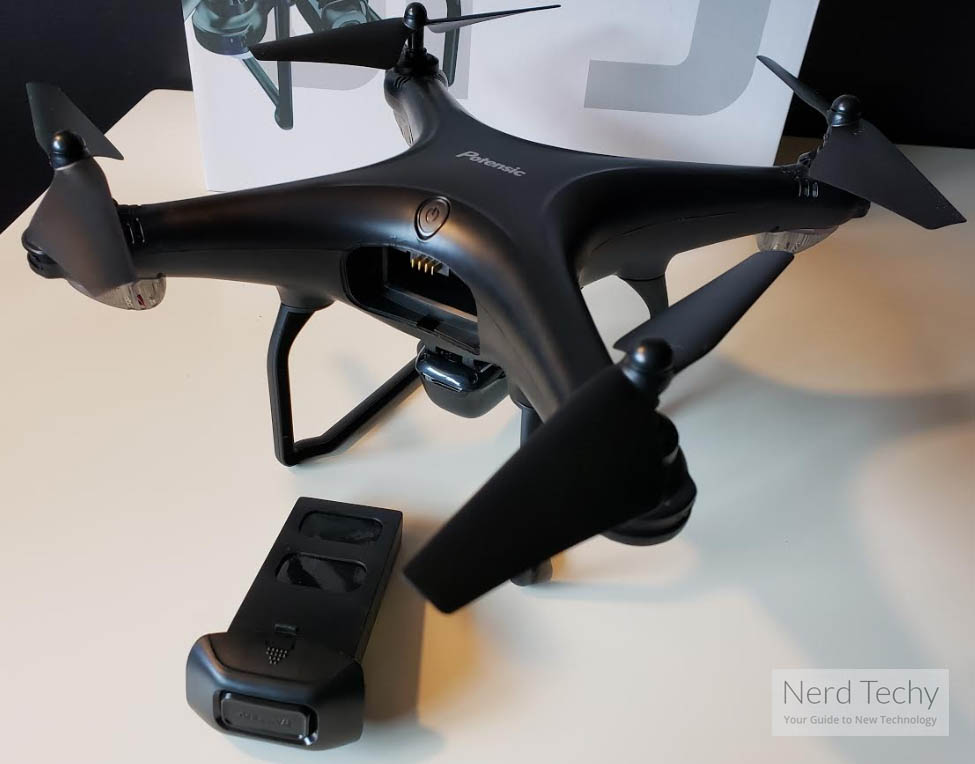 The Potensic D58 is supposed to be able to stay airborne for a total of 18 minutes from one charge of the battery. In a head to head comparison with other popular units in the sub $200 price range, that’s marginally better battery performance. The most popular number is probably 16-minutes of total charge time for most similar drones.

The 18-minute output is the result of a 7.4V 1120mAh high capacity battery. Is that enough to keep the drone in the air for 18-minutes? Well, the answer conditionally yes. One thing you have to keep in mind is that if you try loading additional cargo onto the drone, or effectively alter its weight in any substantial way, that time will be altered. 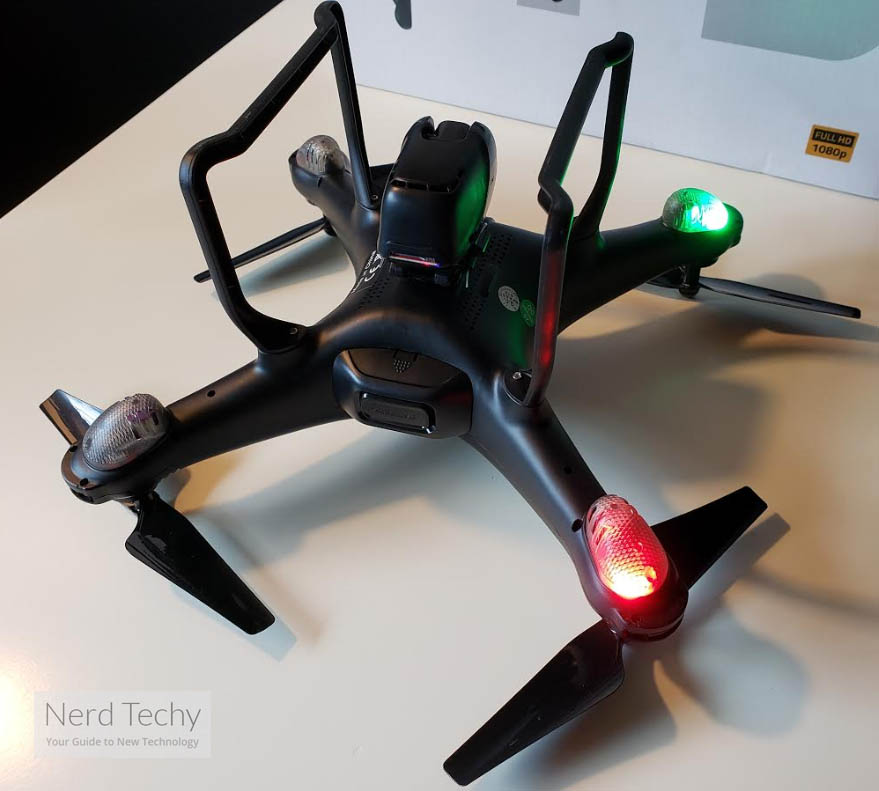 Moreover, that time can be reduced if you’re fighting fierce wind conditions. But outside of those circumstances, you really can expect to achieve the 18-minute mark. And like basically any similar drone, in order to get the best performance from your flights, it’s a good idea to fully charge the battery each time before use.

The remote control is simple but effective. It allows you to control the drone from as far as 500-meters away, which is about 1,600 feet. But technically that 500-meter distance can be reduced by a number of different things. Is there lots of debris in the air? Is it raining? Are you in a dust storm? These kinds of things can squeeze your range down closer to 400 meters for the Wi-Fi transmission distance, and as far down as 300 meters for the remote control. In other words, about a thousand feet for the worst case scenario. 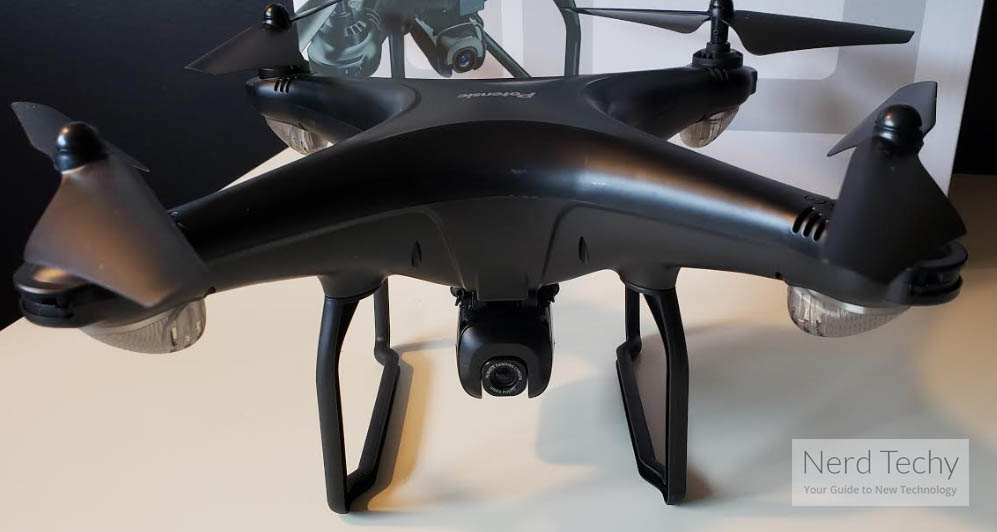 Similar to many entry-level drones these days, the D58 actually supports a variety of different flight modes. The follow-me mode allows you to utilize the GPS on your smartphone, so you don’t need the D58 to use its own separate GPS. Quite handy. Once activated, the drone will follow you, and can capture images as you travel.

Beginners and experienced will appreciate the orbit mode, which allows the drone to hover if you need to take a moment to put down the controls. Then there’s the waypoint mode, which works like it sounds. It allows you to create waypoints which the drone will remember, and then automatically fly to or between those waypoints. 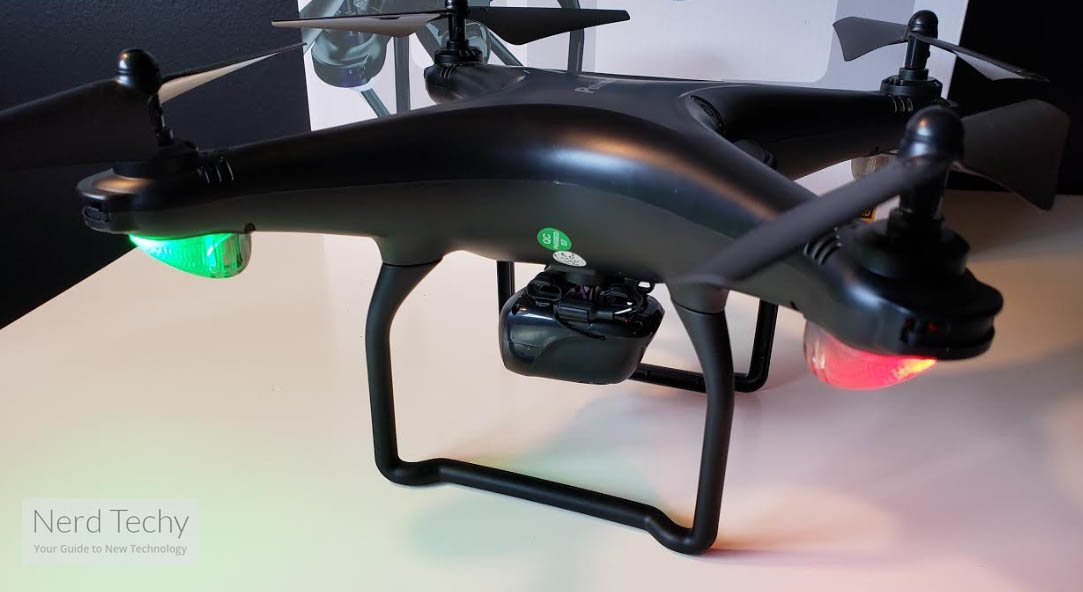 The safe assured flight feature means while using a GPS, the drone can automatically record the flight trajectory. If the drone happens to lose a signal, then it can follow the original flight pack back to where it came from — automatically returning to you. There’s also a one-button auto return feature you can access from the remote that works in basically the same way.

Apart from those modes, you’ll find three speed modes let you adjust the speed of the craft between low, medium, and high. Having access to the lower speeds allows people who are novices to enjoy safely flying the D58, while the higher flight speeds are great for people who are more experienced. So if someone is using it for the first time, give them control on the slower flight mode.

This may be especially useful if you ever hand off control of the drone to a younger person. Apart from making the D58 a little more accessible to kids, it has some benefits for inexperienced flyers as well. If you’re a novice, it’s nice to have some room to grow as your proficiency gets a little better. 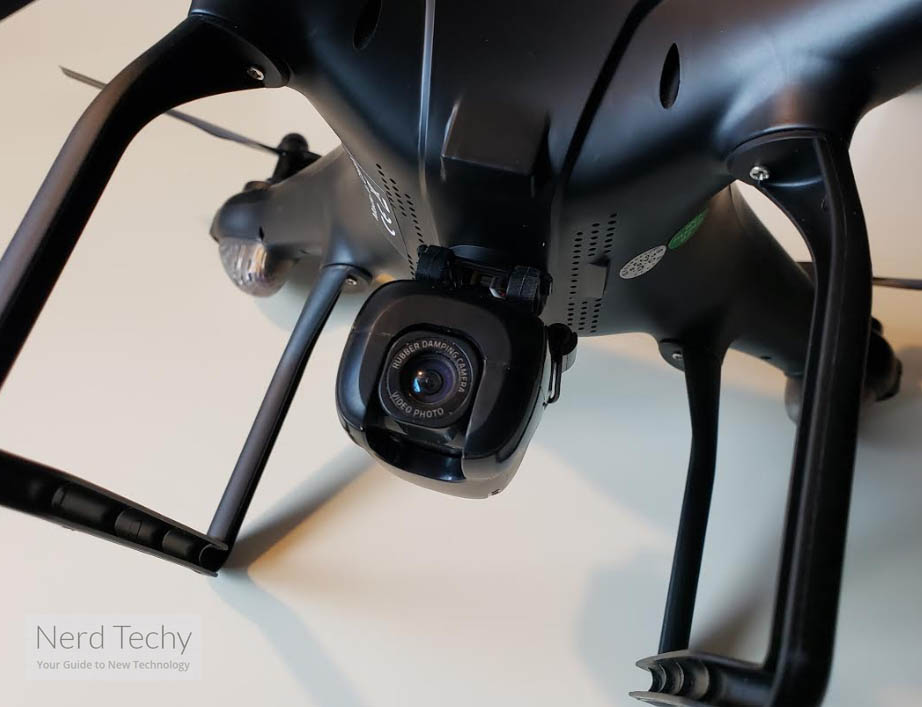 Flying the drone is one thing, but a good camera is at the core of virtually any type of drone. How does the D58 do in the camera department? Well, results are mixed but positive. First and foremost, it’s worth noting the drone’s camera is mounted independently, away from the rest of the device. 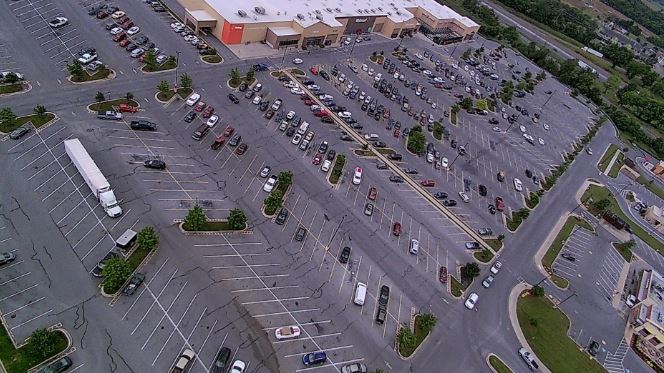 Dangling beneath the rest of the drone, the camera has been mounted on a one is gimbal stabilizer, which is essential to creating more stable footage and reduce shakiness. It does a reasonably good job of keeping things working, but at the end of the day it’s only a one axis stabilizer. It’s not going to provide the sort of smoothness you’d see in a feature film, especially if you’re shooting in bad conditions. 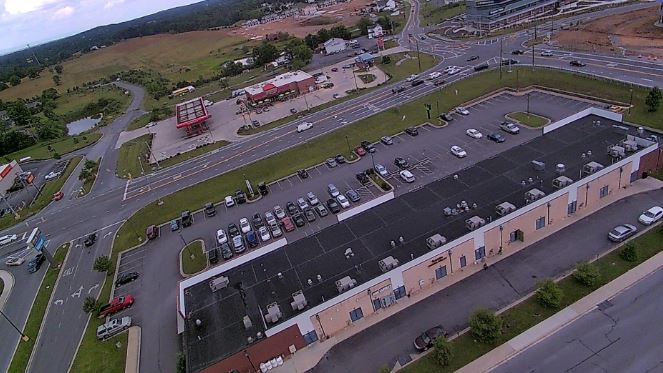 The camera is also a little unique in its overall execution. Typically, drones use a spherical or rounded camera, while this camera looks a bit more like a webcam or security camera that’s been screwed to the bottom of the unit. Even though it’s mounted in this strange way, the lens still provides a nice wide 120° angle view. 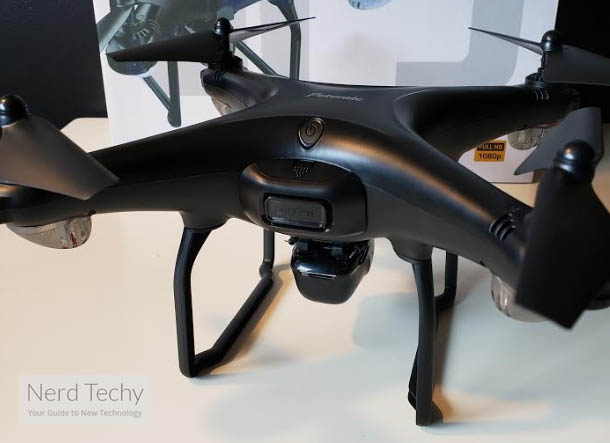 If you want to narrow down the view to 90° instead, that can be done with a button inside the app. The smaller viewing angle is better in a small number of niche circumstances, depending largely on how close you need the drone to get to objects. Beyond that, the rest of the capture is pretty average. The D58’s camera can deliver 1080p videos reliably, while running above 20 frames. You can also get photo stills, and they come out with a pretty good amount of clarity due to the fast shutter speed of the lens.

As you might imagine based on its control distance, it’s possible to view the footage captured by the camera through the app in real time. 5G transmission keeps the footage moving fast and smooth. But using 5G means you do need to maintain line of sight between yourself and the drone at all times. 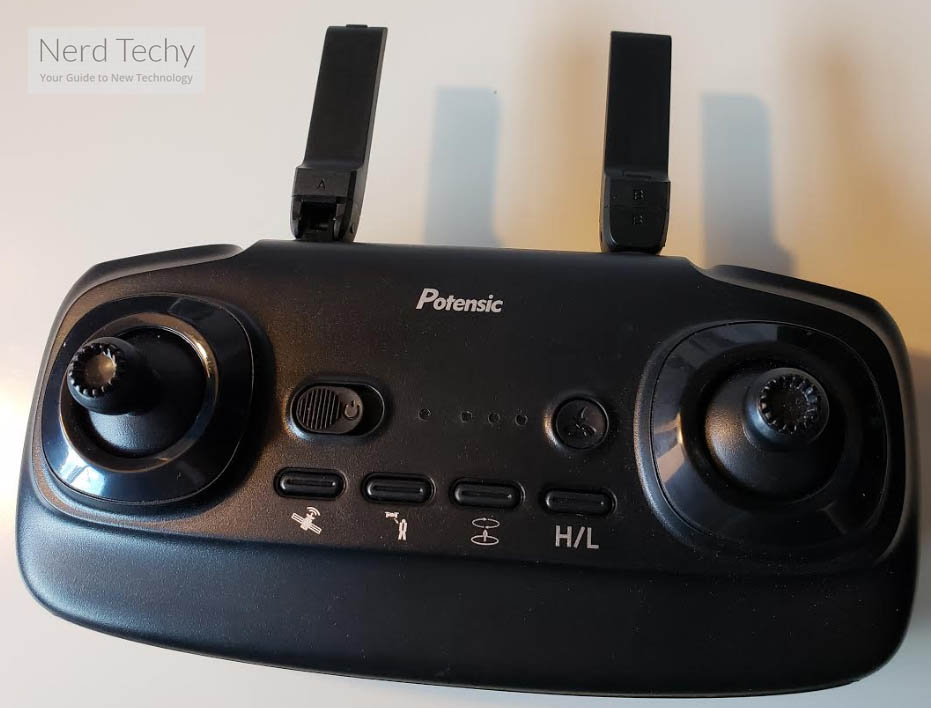 Notably, the D58 uses landing legs that make it easier to land safely. These legs are actually a bit essential given that they also serve to protect the camera. For people who aren’t comfortable with their ability to safely land the drone on their own, it’s nice to have that little safety net.

Additionally, you can create flight points because the D58 was made fully integrated with a Glonass/GPS unit that allows for a variety of smart flight functions. Whether the drone is flying solo or flying manually, it can get a little added stability from the GPS support. The D58 comes with the drone, a remote control, landing gear, propeller set, screws, USB charger, and a user guide. Basically, everything you need to get started. Though there is a minimal level of assembly required, it’s nothing that a teenager couldn’t knock out in ten minutes.

The Potensic D58 has one significant limitation. It’s that the camera is placed on a gimbal stabilizer with only one axis. When your drone inevitably gets struck by a gust of wind, there’s going to be some shaking your video. That shaking isn’t violent because one stabilizer is better than nothing. But it does put some soft limits on what you can expect from the camera while the weather outside is poor. 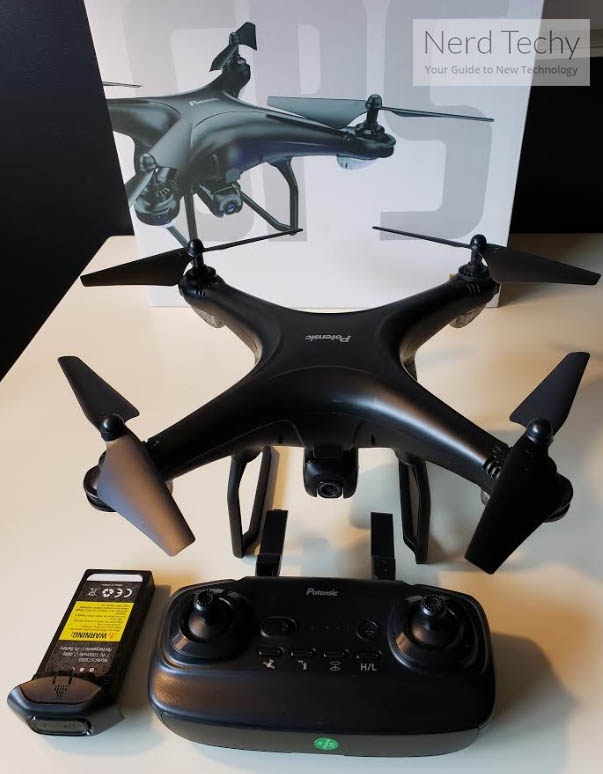 One area for improvement would be the battery capacity. The 18-minute battery is already above average for an intro-level drone like the D58. But depending on the reasons you’re flying the drone, 18-minutes can be a little limiting. Beyond that, the D58 continues to be a pretty solid flyer. It’s got a great 500-meter control distance, and the construction quality is generally great.

So in a price to performance comparison, the D58 seems to be a good value. If you need perfect stability on a windy day, you’ll need to be willing to raise your budget for more camera stability. The same is true for battery life. But at this price point, this is a pretty solid drone.