There are several different tiers of mechanical keyboard. The entry level boards aren’t bad. They usually have weaker construction quality, and few special features, but at least you can get your hands on some nice switches. Mid-range boards tend to be even better because the quality of construction shoots up, and you typically end up with more features. That might include aesthetic features like RGB LED keycaps, or practical ones like separate media control buttons.

But how nice can you make a keyboard? That’s the question which high-end boards are trying to answer. And whether or not it’s worth making the leap from a mid-range board to a high-end board really depends on a variety of different factors. Are you only playing games, or do you also do lots of typing? What kind of games do you play? The list goes on.

So where does that leave the SteelSeries Apex Pro? Well, for starters, it should be obvious from the price alone that this is a high end keyboard. For a high end board, this is actually a little on the inexpensive side because it’s still possible to find boards that run past $300 quite easily. But the SteelSeries Apex Pro has no shortage of nice features, especially the defining feature of this board, which is probably the OLED display. 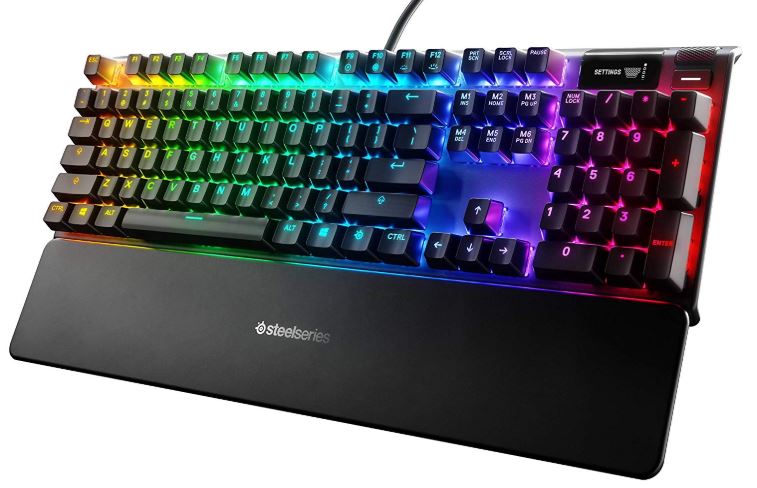 Basically any keyboard that has a display on it will be rather costly on account of the display. And while cramming a screen into your keyboard isn’t going to be the right choice for everyone, it’s certainly got an appeal for certain types of applications. How about the rest of the board? Well, that’s a bit more complex.

The board measures 17.2 x 5.5 x 1.6 inches, which is a pretty standard size for a full sized gaming keyboard like this one. The top plate for this board is primarily constructed from aluminum alloy, selected from aircraft grade material. The bottom portion of the keyboard is a core of ABS plastic, which helps ensure that the Apex Pro doesn’t end up weighing tons. 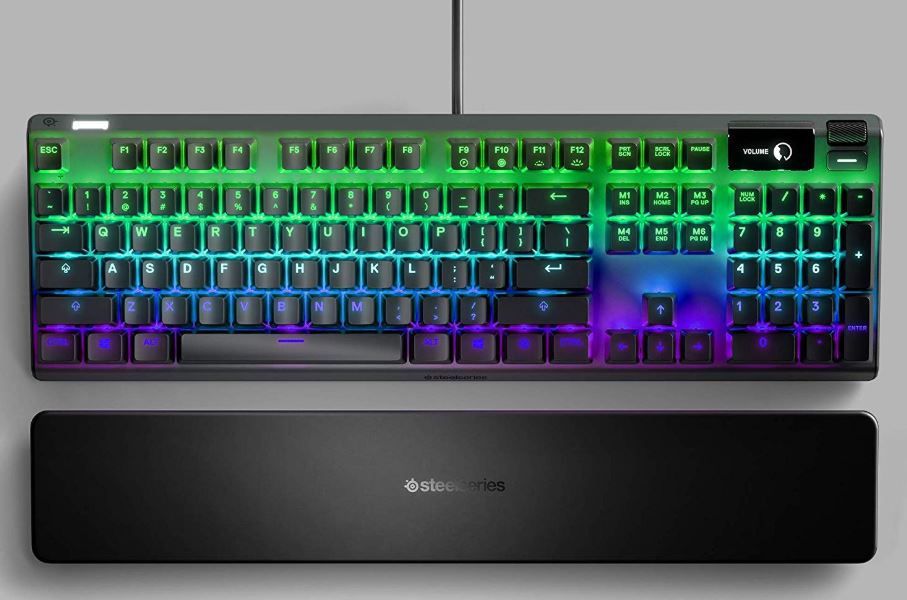 Again, the aluminum build is quite sturdy. It may be worth noting some keyboards have taken to using a zinc alloy instead of aluminum because zinc can be as much as three times stronger. But ultimately, the aluminum build does not flex in your hands. So unless you plan on running over your keyboard with a truck, you shouldn’t have to worry about durability beyond what aluminum can provide.

Though the nearly four-pound weight which it does weigh is not to be taken lightly. Even without rubberized feet on the bottom of the board, it could do a good job of sticking in place. All in all, this construction is supposed to provide a lifetime of survivability, though the real limiting factor will ultimately be the switches instead of the board itself.

The Apex Pro is a full sized board, including a ten-key number pad. And this board uses floating keycaps instead of having keycaps rest inside of a sunken case. Stylistically, a lot of people really love the raised keycaps. And this style makes it much easier to clean your keyboard, often without actually having to remove the keys. But it also means dirt and debris are more visible, so you’ll need to be more vigilant about blowing out dirt from inside your keyboard.

In the top left corner, there’s a USB slot that can be used for pass-through support. That’s great for connecting USB dongles, mice, and so forth. It’s a bit odd they’ve only included a single USB port. But perhaps most people only end up using the one.

For LED lighting modes, you should find SteelSeries has pretty much the same extensive set of options you’ll find with other gaming brands. That includes wave patterns, raindrop patterns, breathing light patterns, and so forth. You can go key by key changing the colors as you wish. How do you get that done exactly? 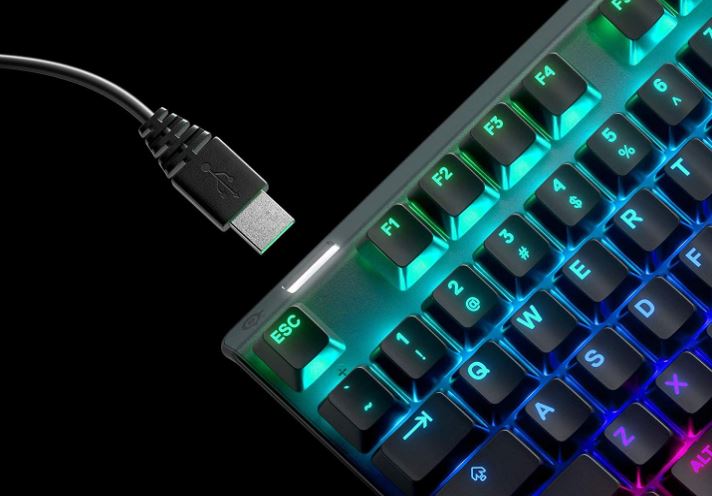 Historically speaking, SteelSeries software is highly approachable stuff. The menus are reasonably intuitive, and it’s clear they make it aimed at gamers instead of programmers. But having to install software at all can be a little tedious. Nobody wants to have to run separate programs in order to manage their keyboard, especially if that board gets used on more than one PC.

Which is why it’s quite common for higher end peripherals like the Apex Pro Mechanical Gaming Keyboard to be designed in such a way that you can configure the board without software. Want to change something about the LEDs? You can get that all done using keyboard shortcuts. Want to change the actuation distance of the switches? There’s no need to get software involved for that, either. That kind of ease of use is something that sounds minor, but it’s easy to appreciate if you ever make adjustments to your board.

Wrist rests can be surprisingly useful. In this instance, it’s a magnetic design, which can be attached and detached quite easily. Since it’s magnetic instead of a clip-on, there aren’t parts that will wear down as you add and remove it, which is pretty great. In general, it provides strong palm support and it’s capable of delivering an ergonomic edge.

Sometimes it’s worth paying extra for a cushioned wrist rest instead of a plastic one. The cushioned ones are far more difficult to clean, and will require cleaning eventually. And you often don’t need cushion to create comfort when it comes to a wrist rest. Because your wrists are only exerting a small amount of pressure on the resting space – the pad really exists in order to help support and straighten everything.

As opposed to Cherry switches, this board makes use of Omnipoint adjustable switches. There are actually a number of pros and cons involved with that decision. First and foremost, you’ll have a slightly harder time replacing the keycaps on this board. Omnipoint switches are a little more obscure, so people who enjoy alternative keycaps will be at a bit of a loss. 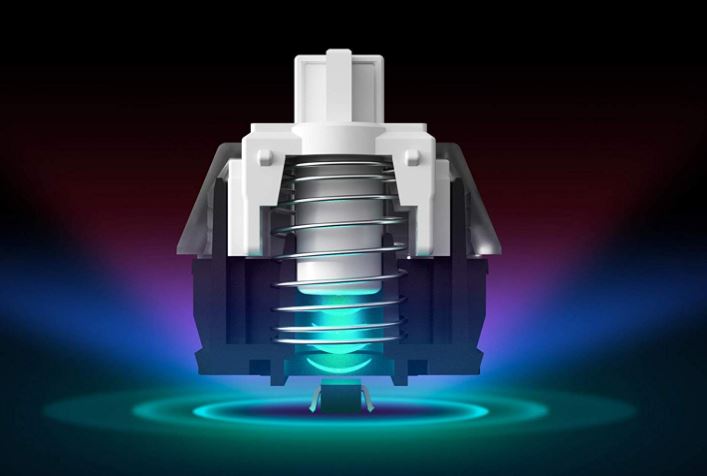 But there are also unique advantages to these switches. Most notably, they allow for the actuation point of each key to be set along a wide range of possibilities. They allow you to move between 0.4mm and 3.6mm, which is actually a huge difference. It’s basically the difference of touching the key, or having to bottom it out.

You might want a different actuation point depending on if you’re playing a game or you’re typing because having a higher or lower actuation point can impact performance. For instance, it can impact your ability to accurately double-tap a key and have both taps register. Even if you set-and-forget the switches, being able to adjust them at all means you can find the levels most appropriate for yourself.

Anytime you’re choosing a high end keyboard, it’s worth asking about the quality of the keycaps. About half the time, even high end boards make use of fairly inexpensive keycaps. Because frankly most consumers don’t know the difference, and many wouldn’t care if they did. In this case, the included keycaps are made from ABS. And it’s a decent quality ABS that is going to maintain the integrity of the lettering on each keycap over many years of use. 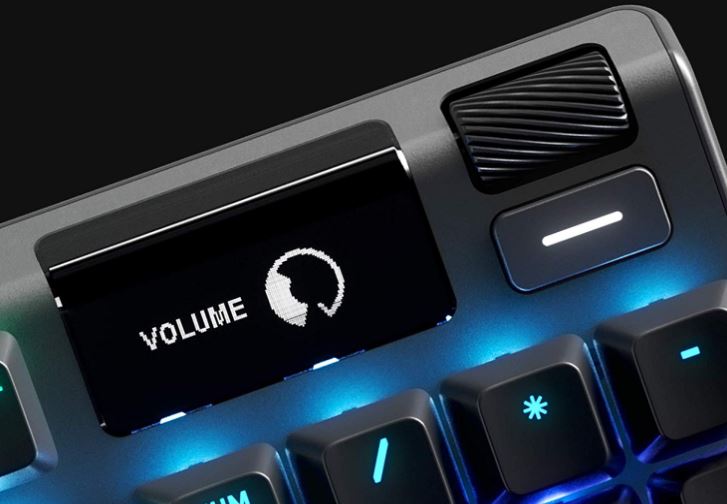 However, ABS is always going to behave like ABS. Eventually these keycaps will become polished looking and shiny feeling. That’s when some people will wish it was easier to swap the keycaps. But considering most people don’t actually care about the feel of worn ABS, since the keycap lettering will remain stable, it’s fair to say these keycaps are passable.

For RGB illumination, you’re looking at a total of 16.8 million color possibilities. That’s basically the full potential of a modern RGB LED key. Notably, the lighting doesn’t only come out from underneath the key caps, it’s bright enough to escape from the bottom side of each keycap.

Perhaps more importantly, the OLED display makes it possible to use this board as an integrated command center. You’re able to adjust this display to accommodate Discord, Spotify and so forth. Even if you’re a touch typist, and you’re rarely looking down at your keyboard, you will still encounter times when having an extra screen can be useful. Suppose you’re in a Discord chat with another ten people, and you want to know who is speaking.

One thing you could do is minimize your game, or bring up the Discord window on one of several monitors. But what if you could just look down and read their username off the OLED screen on your keyboard? It can be pretty convenient, even if you’re only going to use it to keep an eye on your music. But the display adds a considerable amount of cost to this board, it could easily be 20% of the total cost. So if you weren’t interested in having an OLED display, this board wouldn’t make total sense. 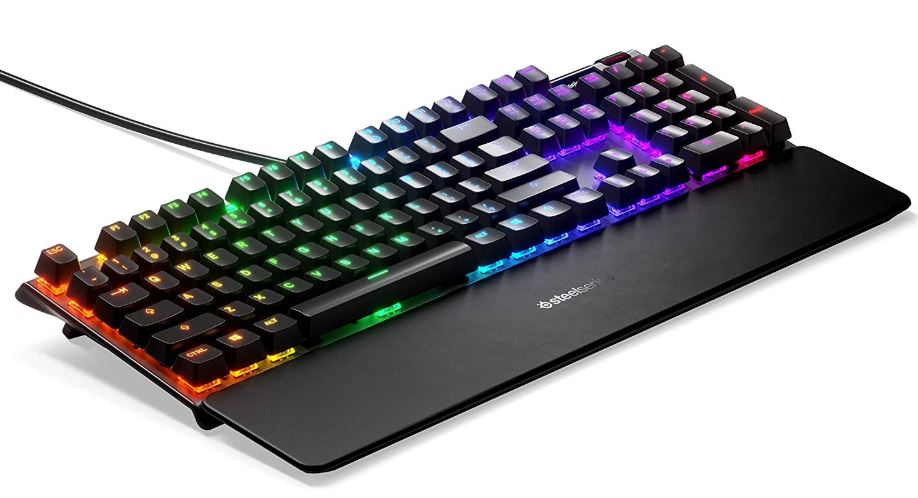 One thing to get out of the way. SteelSeries tends to make good products — but they arguably have the worst customer support in the industry. So even though it’s unlikely you’ll end up with some kind of defective board, if you do, you’ll be doomed to spend weeks interacting with support.

The general construction of the Apex Pro Mechanical Gaming Keyboard is very good. Once you’ve got an aluminum top plate, you know the board won’t have any flex to it. And the switches are pretty cool. If you both play games and also do a lot of typing on your keyboard, then you’ll find that being able to move the switches between different actuation distances can be quite advantageous.

Ultimately this board is going to work well for people who can make strong use of the OLED display. It ought to be especially good when paired alongside VOIP programs or music apps, allowing you to make the most of an extra screen. For people who can’t get much use out of the display, you’d be better off with a simpler board.